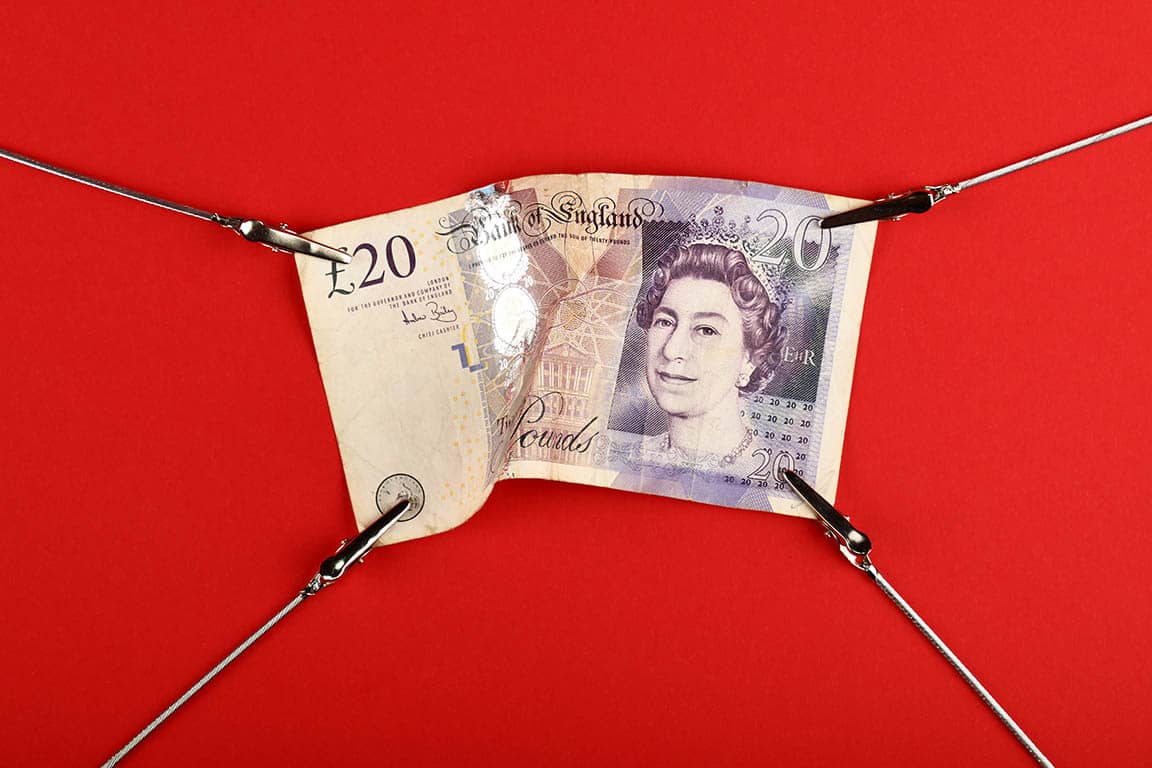 An assessment of the health of the British Pound is required after its recent performance left a number of prominent publications to warn it was suffering another Brexit style existential crisis.

The below headlines suggest recent coverage of the currency to be heavily skewed to the negative:

How do the above headlines tally with the reality written into the charts?

Not very well: below is the 2021 daily chart for the Pound-to-Euro exchange rate (top) and Pound-to-Dollar exchange rate, (bottom): 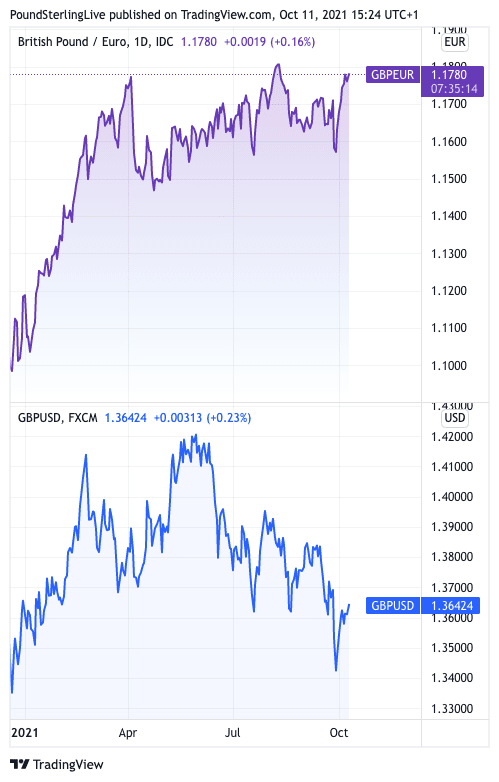 As can be seen the Pound-to-Euro exchange rate is close to retesting its 2021 highs.

The Pound-to-Dollar rate is now recording a loss for 2021 but the declines are contained and not suggestive of a chaotic breakdown.

Yet there has been a tendency amongst some analysts and financial writers to marry recent supply chain issues in the UK to the Pound's performance.

"I have to admit that my sympathy for all those Brits who voted in favour of Brexit in 2016 and now have to queue for fuel is limited," says Ulrich Leuchtmann, Head of FX and Commodity Research at Commerzbank.

Leuchtmann in a note out October 05 describes the UK's economy as "battered", despite second quarter GDP data showing it to be no better or worse off than Germany's and the rest of the G7 at this stage in the post-pandemic rebound.

"Talk of stagflation is rife in the UK media, and GBP perma-bears, an ever-present market feature since the 2016 Brexit vote, have reemerged with confidence after spending most of 2021 until now in a subdued state," says Shahab Jalinoos, Global Head of Foreign Exchange Strategy at Credit Suisse.

However, this is by no means unique to the UK as per a widely shared Washington Post article dated October 11 and titled "Inside America's Broken Supply Chain".

In the EU there is a shortfall of 400K HGV drivers while the continent is particularly exposed to surging gas prices, as noted by Euronews: "While the crisis is global, Europe has been hit by several aggravating factors that could make the crisis more acute."

"For parts of 2021, GBP was the market's darling," says Mark McCormick, Global Head of FX Strategy at TD Securities, but adds, "the UK is now going the ways of a modern-day banana republic."

McCormick cites the same litany of issues faced by the world's major economies for this caricature of the UK, namely labour shortages and rising gas and fossil fuel prices.

A particular catalyst for the recent bearish slant on Sterling's prospects and associations with chaos was the run on fuel stations by nervous drivers .

Subsequent analysis of the panic showed that the crisis was simply down to a surge in demand that panic buying can illicit.

RBC Capital Market are particularly bearish on the Pound's prospects and they issued a piece of research around the time of the petrol crisis in which they associated the Pound with Emerging Market currencies.

They say they "expect grinding GBP underperformance to continue into the medium-term" as a result of a litany of UK economic woes. 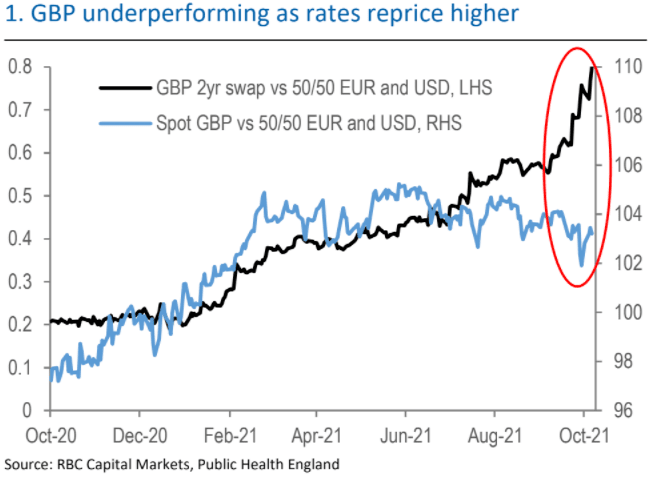 RBC Capital cites the above chart as evidence of a deterioration in Sterling's fundamentals, (it compares the Pound's value based on a 50/50 exchange rate with EUR and USD against UK bond yields movements).

Senior Currency Strategist at RBC Capital, Adam Cole, says one possible reason for the detachment evident between the two in the chart is that the Pound has started behaving as an Emerging Market currency; a comment that was widely picked up by the news media.

A great deal of the rift between Sterling and rates in the above chart comes from the downward drag of the Pound-Dollar rate in particular, which to a degree is benefiting from safe haven demand in an uncertain global investor environment.

"With sentiment souring on the UK macro outlook, it is common to hear investors cite the weakness in GBP/USD as an indicator of tougher times ahead. However, this latter linkage appears dubious to us at this time," says a cross-asset strategy note released by Morgan Stanley on October 08.

The note goes on to add that the UK "has become the proverbial lightening rod for investor concerns around inflation given higher relative vulnerabilities to rising energy costs and supply disruption and a more hawkish sounding Bank of England."

"Investors are quick to cite GBP/USD weakness as an illustration of a potentially deteriorating UK macro outlook. However, the move lower to 1.35 is driven by USD strength rather than GBP weakness - against the EUR the UK currency is close to a YTD high".

Stephen Gallo, European Head of FX Strategy at BMO Capital Markets says the weakness in Pound-Dollar is largely a case of Dollar strength.

"The move lower in GBPUSD spot can be blamed almost entirely on the rally in the USD. What seems to be happening is that the recent spike in energy prices is forcing market participants to discount a faster pace of central bank normalization, which in turn is leading to a deterioration in risk sentiment," says Gallo.

The Dollar is the second-best performing major currency of 2021, finding demand on the back of U.S. economic outperformance and associated expectations for higher Federal Reserve interest rates in 2022.

But safe haven demand during bouts of investor nervousness has also been a significant driver of demand, particularly since equity markets started edging lower from early September.

"The reasons behind the USD rally are quite clear. Financial and economic concerns about China are not over, and lingering risk aversion, amid more-volatile equity markets, continues to reinforce the role of the greenback as the most favoured safe-haven currency for now," says Roberto Mialich, FX Strategist at UniCredit.

The Pound started 2021 in strong fashion, fuelled higher by the completion of Brexit and a rapid UK vaccine rollout.

The advance ended towards April and the pair has trended sideways against the Euro and lower against the Dollar and the outlook is mixed, as per the wide range of forecasts offered by the major financial institutions.

Some potential headwinds include the return of Brexit anxieties built around the Northern Ireland protocol, which could come to a head again soon as well as fears that UK inflation will prove particularly damaging.

Some supportive elements include the prospect of a Bank of England interest rate rise in late-2021/early-2022 as well as an ongoing economic recovery.

McCormick says the energy price shock facing the UK will prove relatively short-lived and the prospects of a Bank of England hike will help to cushion the currency, especially relative to low-yielders like the Euro.

"What's more, we also think the USD bounce is starting to look toppy, arguing that we're probably nearing the lower-end of the GBPUSD range," says McCormick.

But a mixed set of views on the outlook is common to all the major currencies and by no means signifies a currency in crisis.