The Eurozone's single currency is up against the British Pound at the time of publication, although the advance is a relatively disappointing one for Euro 'bulls', given that the Pound is looking vulnerable amidst rising concerns the UK government is considering delaying the country's final exit from Covid-19 restrictions.

The Pound-to-Euro exchange rate is quoted at 1.1624, which puts it smack in the middle of a range that has been in place since late February: 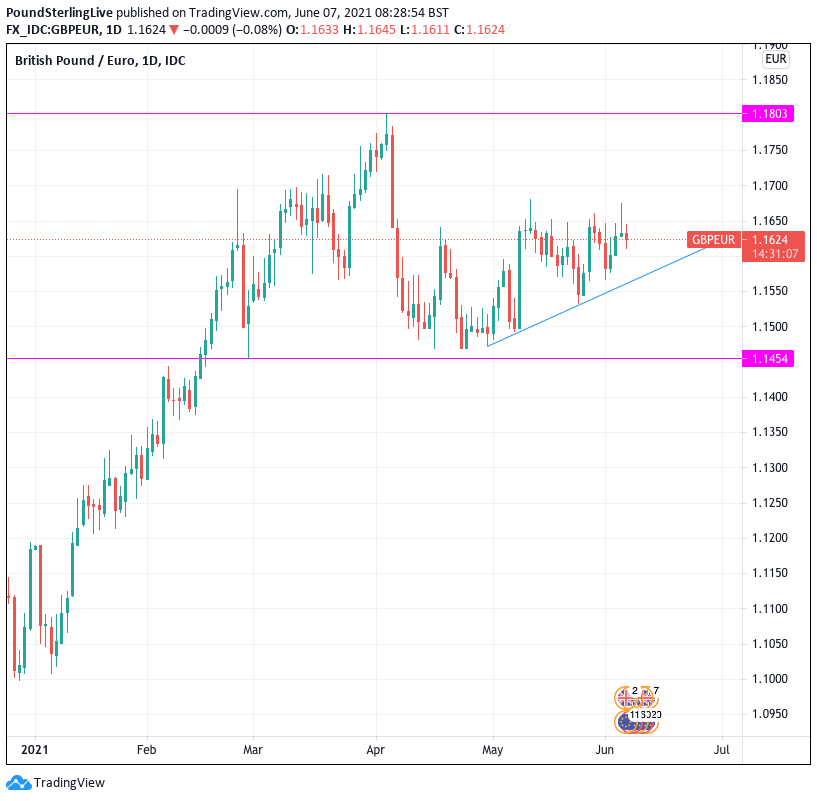 Of late, the exchange rate has been moving higher within this range, as evidenced by the short-term trend line in the above.

However, the move higher is by no means an aggressive one and there is the potential for a decline lower or drift sideways over coming days as the price moves to meet that trend line before edging higher again.

The technical setup in GBP/EUR is therefore one that is unlikely to deliver any major advantage for those looking to buy Euros, nor is it one that hints at any looming significant loss of purchasing power.

However, Karen Jones, Head of FICC Technical Analysis at Commerzbank, says the 2021 uptrend in GBP/EUR remains intact, and while above 1.1590 a broader positive bias remains her preferred approach to this market.

Therefore, the bigger picture is still one that largely favours the Pound meaning an element of patience is required when approaching this market.

If there are to be any sizeable moves in Euro exchange rates they would likely occur on Thursday when the ECB deliver their policy update.

Foreign exchange markets will want to know if ECB President Christine Lagarde and her team are now considering whether or not to reduce their extraordinary support to the economy which includes ultra-low interest rates and generous quantitative easing.

If the ECB do indicate that the economic rebound will be strong enough for them to consider reducing support via their quantitative easing programme - known as PEPP - the Euro could benefit.

The great theme for foreign exchange markets at present concerns how the world's central banks are exiting their support programmes, with those looking to make an exit seeing their currencies better supported.

A subdued tone by the ECB on the region's economic outlook and the maintenance of a steadfast commitment to maintaining support could therefore see the Euro going lower.

The weight of the looming decision means the Euro is failing to really find any traction at the start of the new week, with declines noted against the Dollar in particular.

Should the Euro remain under pressure against the Dollar over coming days then we would expect the Pound-Euro exchange rate to remain relatively well supported.

"The highlight for the EUR this week will be Thursday’s ECB meeting. Our team sees the main objective of the day being to avoid taper talk," says Chris Turner, Global Head of Markets and Regional Head of Research for UK & CEE at ING Bank.

Turner notes money markets have "backed away from the idea that the ECB will slow down PEPP purchases – potentially meaning there is little downside for the EUR from this meeting".

But he also acknowledges that the bar to initiating a material decline in the Euro via sending a cautious signal is incredibly high.

"The ECB will not want to do anything to encourage a stronger EUR, yet it seems hard for them to adopt any more of a dovish
position than they have already," says Turner.

For the Pound, there is little on the economic docket or event calendar.

This leaves direction reliant on the evolution of the country's Covid-19 pandemic and whether or not restrictions will be completely lifted on June 21.

The British Pound came under pressure at the start of the new week, amidst warnings the UK's "irreversible" journey out of lockdown will be delayed.

When Prime Minister Boris Johnson first announced plans to exit lockdown he described the process as irreversible, but with cases on the rise once more it appears the government will in fact not go ahead with the final step of easing, due on June 21. 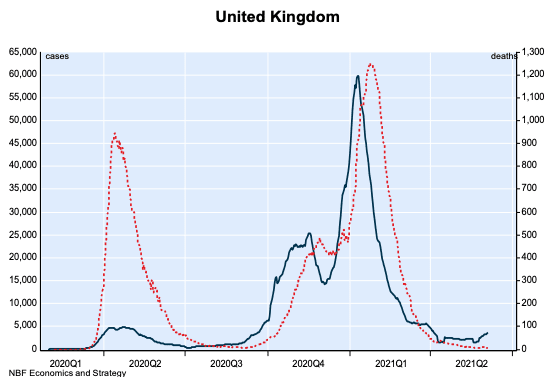 The Government is "absolutely open" to delaying the June 21 unlocking, said Health Secretary Matt Hancock, in the strongest indication yet that the date for the next step in the roadmap could be put back.

Media are reporting a two-week delay until July 5 has been under discussion by scientists and civil servants, and Hancock's remarks confirmed that pushing back the relaxation of restrictions was being considered.

The delay comes amidst rising cases of the variant of Covid-19 first identified in India that has seen the infection rate rise sharply over the past month, with little sign the rise in cases is about to stall.

Any delay to unlocking risks undermining confidence in the UK economic rebound, which has been a foundation of Sterling's solid performance in 2021 thus far.

The Pound could struggle to find form amidst the dour narrative regarding fully reopening the economy.