The British Pound has come under pressure at the start of the new week amidst warnings the UK's "irreversible" journey out of lockdown will be delayed.

When Prime Minister Boris Johnson first announced plans to exit lockdown he described the process as irreversible, but with cases on the rise once more it appears the government will in fact not go ahead with the final step of easing, due on June 21.

The Government is "absolutely open" to delaying the June 21 unlocking, said Health Secretary Matt Hancock, in the strongest indication yet that the date for the next step in the roadmap could be put back.

Media are reporting a two-week delay until July 5 has been under discussion by scientists and civil servants, and Hancock's remarks confirmed that pushing back the relaxation of restrictions was being considered.

The delay comes amidst rising cases of the variant of Covid-19 first identified in India that has seen the infection rate rise sharply over the past month, with little sign the rise in cases is about to stall.

Any delay to unlocking risks undermining confidence in the UK economic rebound, which has been a foundation of Sterling's solid performance in 2021 thus far.

The Pound-to-Euro exchange rate trades at 1.1615 at the time of this article's update, down 0.20% on the day while the Pound-to-Dollar exchcange rate is down a third of a percent at 1.4123.

Caution on the planned roadmap out of Covid restrictions is prompted by scientists finding the Indian variant (known as B.1.617.2) could spread around 50% more quicker than the previous dominant strain in the UK, known as the Kent variant.

It is this increased transmissibility that lead Johnson to say there could be "serious disruption" to lockdown easing in England on 21 June as a spike in cases could put pressure on the health system.

The Pound started the week as the top performing G10 currency over the past month and some analysts say it will likely overcome concerns related to the Indian Covid variant and rise further over coming months, according to a leading currency strategist.

"We are recommending a new long cable trade idea to reflect our bullish outlook for the GBP," says Derek Halpenny, Head of Research, Global Markets EMEA and International Securities at MUFG. 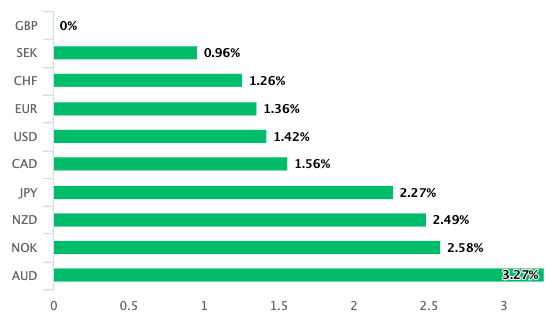 Above: GBP is the best performing major currency of the past month.

"While there may well be a delay, we doubt this is reason to turn negative on the outlook for the pound," says Halpenny. "The backdrop remains positive in our view."

Economists at ING Bank say compared to the economic boost of the lockdown-easing on May 17 and back in April 12, "a 'June pause' probably won't significantly derail the UK's recovery."

"That more heavily depends on whether the recent surge in confidence goes into reverse," says James Smith, Developed Markets Economist at ING in London.

Business and consumer confidence will be key as this will determine whether the spending and investment required to drive an economic rebound is forthcoming.

Weekly short-term data published by the ONS continues to show increases in mobility with bookings in restaurants and pubs now above pre-lockdown levels as activity normalises.

"Mobility is already surging before the 21st June decision, suggesting it is not an impediment to the pick-up in activity expected," says Halpenny.

MUFG track the three Apple mobility measures and the latest readings show the UK has now surpassed their Eurozone measure and that of the U.S. 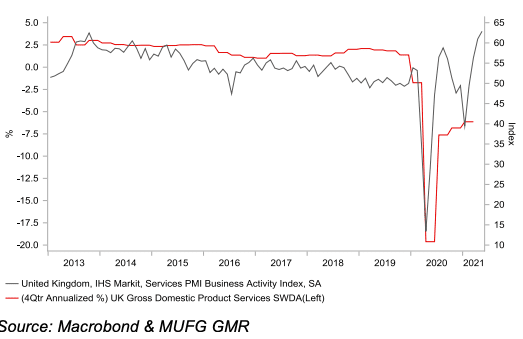 Above: Activity in the UK's dominant services sector is at a record high. Image courtesy of MUFG.

This leads MUFG's economists to anticipate that the economic growth data for the second quarter of 2021 will print stronger than many in the market are expecting, which if correct could provide the kind of surprise required to generate further buying interest in Sterling.

The current Bloomberg consensus for second quarter GDP is 4.4% but MUFG economists are expecting GDP to advance by between 5.0% and 6.0% in the quarter.

The potential for the UK economy to beat expectations could encourage the market to further bring forward the date they expect the Bank of England (BoE) to raise interest rates.

The Pound rallied on May 27 after a BoE Monetary Policy Committee (MPC) member surprised markets by saying that in his opinion the case for a rate rise being brought forward from the end of 2022 is a clear risk.

Gertjan Vlieghe - known to be one of the more cautious members of the MPC - said it was possible the labour market could recover at a quicker pace than many are expecting "should the transition out of furlough happen more smoothly".

If this were to be the case, a "somewhat earlier rise in Bank Rate would be appropriate," he said in a speech.

Expectations for when central banks will exit their extraordinarily generous support programmes introduced during the pandemic period are a key driver of currencies at present.

Those central banks that are reducing support by cutting their quantitative easing programme and signalling interest rates rises over coming months are seeing their currencies outperform, while those belonging to peers that are resolute in a desire to keep settings unchanged are seen underperforming.

The Pound and Bank of England appear to be in the former grouping.

"GBP is already the 2nd best performing G10 currency this year but we see scope for that outperformance to continue over the coming months," says Halpenny.

MUFG have initiated a new trade that looks to buy the Pound against the Dollar, targeting a move to 1.45 in GBP/USD.