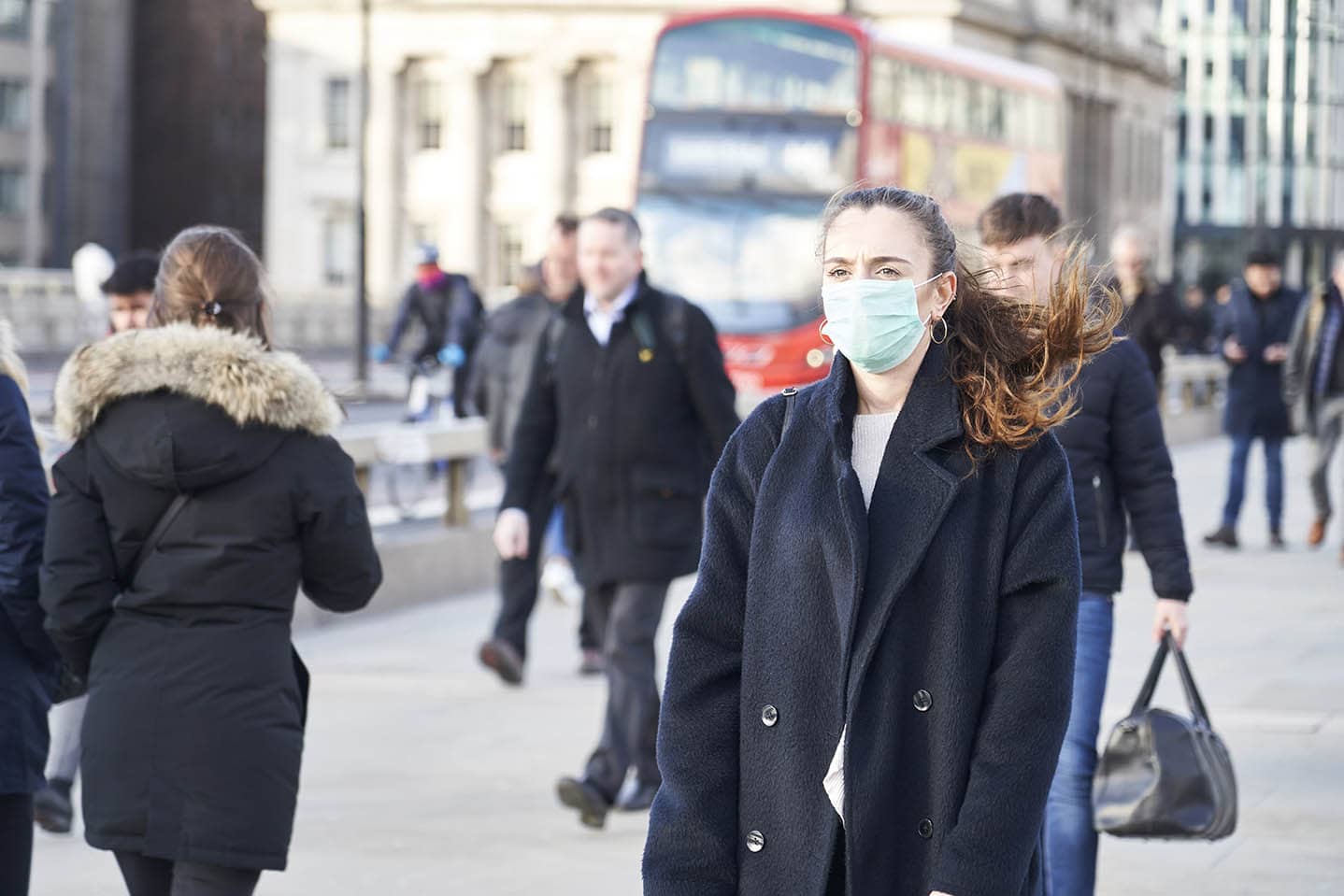 A strong rebound in UK economic activity continues to underpin valuations in the British Pound, although the market appears to be awaiting a new and more significant driver to reignite investor interest and deliver any real gains.

The Pound-to-Euro exchange rate closed the previous week close to the 1.15 level, helped in part by ongoing signs that the UK economic revival was intact.

The recovery theme in the UK was underscored by the latest monthly Lloyds Business Barometer which showed confidence amongst UK businesses rose above the long-term average for the first time in two-and-a-half years. 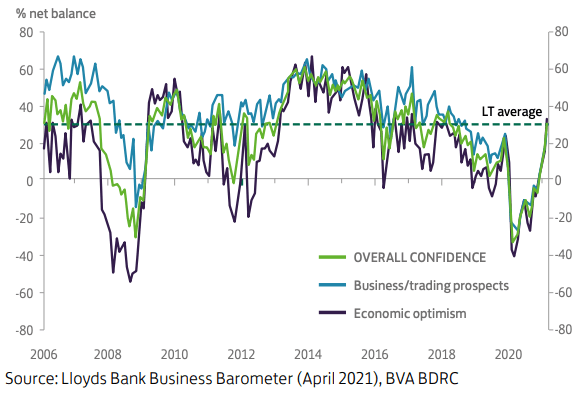 Business confidence increased by 14 points to 29% in April, above the long-term average (28%) for the first time since September 2018 and a two-and-a-half year high.

Lloyds Bank says the rally reflects significant improvements in both trading prospects for the year ahead (up 13 points to 25%) and optimism about the economy (up 15 points to 32%).

Less than half of firms (46%) in the survey said that current demand is being negatively impacted by the pandemic, down from 74% in April 2020.

The net balance for staffing levels in the coming year increased by 4 points to 8%, the highest since February 2020, while a quarter of businesses (up from 17% in March) expect average pay increases of 2% or more.

Given widely-held fears amongst economists that the UK will experience a jump in unemployment once the furlough scheme ends in September, the data should go some way in bolstering expectations about the outlook.

The data is consistent with a consensus view the UK economy should experience a sharp rebound in 2021, which is a fundamental source of support for the Pound.

The data nevertheless came as the Pound-to-Euro exchange rate churned around the 1.15 level, having suffered its first month of decline since September 2020. 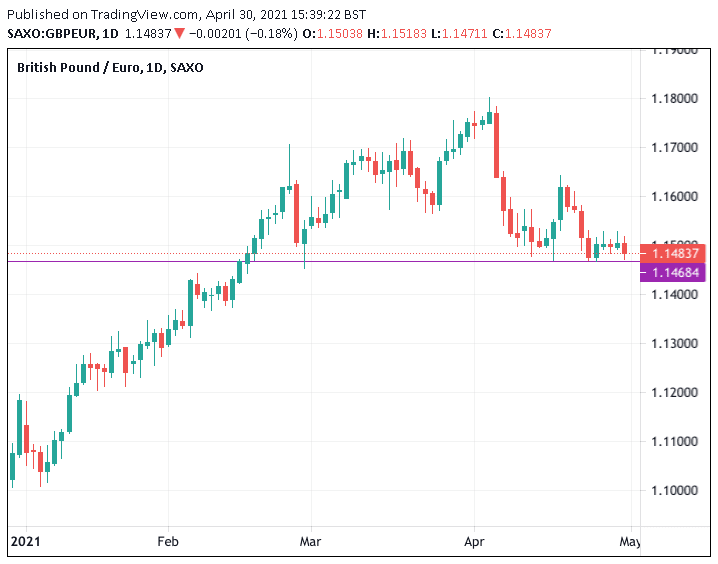 Above: GBP/EUR has been stabilising at month-end following a decline recorded in April.

The UK currency is not flying out of the blocks, but it is nevertheless looking better supported than was the case in the first three weeks of April when it declined sharply.

Those looking for a stronger Pound would hope that a base is being formed ahead of another attempt higher.

Those hoping for a weaker currency will be looking for signs that the stabilisation was the market unwinding short-term oversold conditions ahead of another leg lower.

The exchange rate started the month at 1.1750 before falling 2.0%, but the 1.15 area does appear to be where there is some supportive buying interest.

Indeed, while the data is undoubtedly supportive of Sterling, analysts warn much of the good news might already be in the price of the Pound.

"While data continues to beat expectations, it is doing so to a lesser degree than towards the middle of last year, thus having a less significant market impact," says Michael Brown, Senior Market Analyst at CaxtonFX.

"This pricing in of so much good news is a primary reason why, by and large, sterling assets have been rather rangebound of late; the bar for appreciation is high, yet there is also little reason to be bearish," he adds.

Trade in the month ahead could be decided by events on May 06 when the Bank of England delivers its quarterly Monetary Policy Statement and the Scottish people go to the polls.

Analysts have noted that the potential for a pro-independence outcome in the vote could be one reason why the Pound has been unable to find upside impetus over the course of April.

"The pound, enjoying a period of calm after 4-1/2 years of Brexit-linked chaos, may suffer some turmoil if an election next week raises the chances of Scottish nationalists calling a vote on independence from the United Kingdom," says George Vessey, Currency Strategist at Western Union Business Solutions.

"Such a vote is unlikely for some time, and indeed the United Kingdom government says it will not permit one at all. Yet much depends on the size of any SNP victory on May 6th. It’s worth noting that in the 2014 independence referendum as the probability of a Scottish "Yes" vote surged, GBP/USD dived by 10 cents," he adds.

What recent years have shown is that political uncertainty tends to weigh on the UK currency and therefore were Nicola Sturgeon's SNP to fail in their quest of securing a majority the Pound could be subject to some relief-style buying.

Polls suggest support for the SNP and independence have dipped over recent weeks, but in reality the outcome is still too close to call with a significant degree of confidence.

With regards to the Bank of England, more analysts are coming forward to say they expect the Bank to announce the intention to 'taper' their asset purchase programme at the May meeting.

This would signal a significant move towards tightening monetary policy at Threadneedle Street, which would potentially offer the Pound support.

Shaun Osborne, FX Strategist at Scotiabank says with regards to the GBP outlook, "the BoE’s meeting a week from now comes into focus with economists mixed over whether the bank will tee up a reduction in its rate of asset purchases - with some even expecting such a move to be announced next week."

Such a move by the BoE would come as something of a surprise to markets given that it was only three months ago that the debate centred on whether or not the BoE would cut interest rates to 0% or below.

"We think the BoE will still lean towards caution and fall short of any announcements – such as a slowing of quantitative easing (QE) purchases – which could be construed as overly hawkish by the markets," says Christopher Graham, Economist at Standard Chartered.

One analyst who believes a 'taper' (which would support the Pound) is on the cards is Robert Wood, UK Economist at Bank of America.

"We look for the BoE to taper QE purchases at next week's policy meeting," says Wood.

Bank of America expect the Bank to endorse market expectations for two rate hikes by the end-2024 in the report, which would put them ahead of a good number of other central banks on the normalisation programme.

Of course, these expectations all ultimately rely on UK economic data continuing to come out strong which in turn relies on the country's roadmap out of lockdown being followed.

For now the pandemic and vaccination programmes are evolving in such a way as to allow the unlocking programme to remain intact, but as always with this pandemic be on the lookout for any nasty surprises.