The Pound-to-Euro exchange rate (GBP/EUR) sold off a further half a percent on Thursday, declining back to 1.1512 and putting it in course to break to fresh multi-week lows over coming days.

The declines in Sterling fly in the face of a raft of strong data that suggests a solid UK economic rebound is underway, leaving a great degree of uncertainty amongst currency market commentators as to what is driving the losses.

The Pound started the new week in bullish fashion, leading to expectations that the period of April decline was coming to an end and that the 2021 trend of appreciation might resume.

However FX market price action from Tuesday onwards has been largely one of Sterling sales, with losses being recorded against all the major currencies: 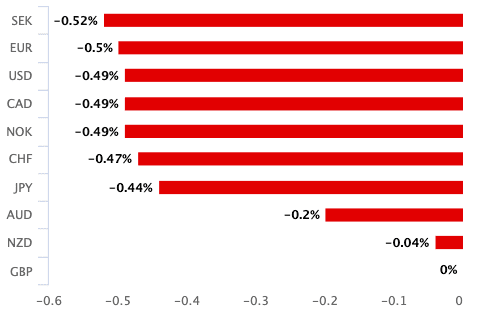 Above: GBP came under pressure against all currencies on April 22.

Analysts we follow are saying the decline in the GBP/EUR rate appears to be the primary driver for sales in other pairs, therefore how the UK currency performs against its European counterpart over coming hours and days will determine how the broader Sterling market evolves.

Declines in GBP/EUR come amidst an improving outlook for the Euro, with analysts saying the region's accelerating vaccination rate is allowing investors to turn more constructive.

"The euro’s poor performance throughout Q1 was largely due to the underwhelming speed of vaccine distribution in the bloc," says Olivia Alvarez Mendez, FX Market Analyst at Monex Europe.

"As the EU kept underperforming throughout the first quarter, the euro took on water against both the US dollar and British pound, as those currencies enjoyed a head start to their vaccination programmes and promising reopening prospects," addss Mendez. 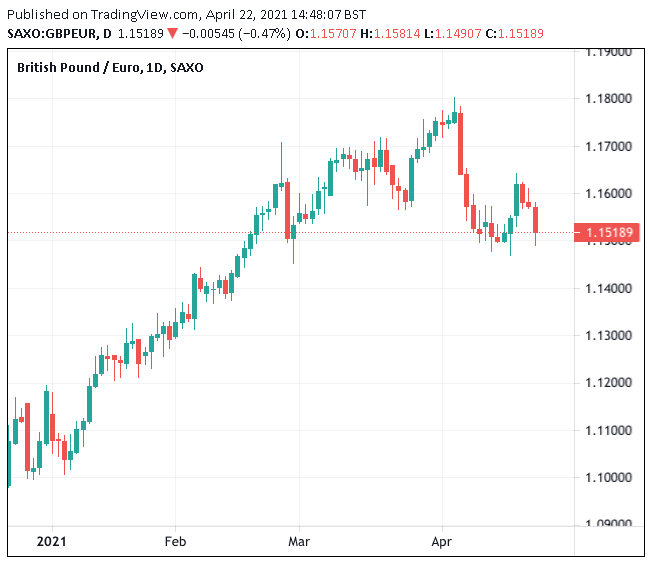 However, with vaccinations set to increase in the coming months, Mendez says the Euro has found upward momentum at the beginning of the second quarter.

The European Union has seen a sharp increase in vaccine supplyduring April, allowing it to set at target to vaccinate 70% of the adult population by the end of June, which is an upgrade on a previous target to do so by the end of the summer.

"We expect the euro to catch up with the US dollar and British pound in the next quarters as the vaccine rollout ramps up, evening out the results of the economic horse race," says Mendez.

Underscoring how the improvement in the vaccination programme will impact economic activity, European consumer confidence - a key ingredient of economic activity - soared to the highest level since the start of the pandemic.

According to a data release from the European Commission out on Thursday, European consumer confidence rose 3.1 points in the EU and 2.7 points in the Eurozone in April.

Analysts at ING say the improve is linked to progress on vaccinations accelerating and allowing reopenings to come closer.

"This boosts our own confidence in a strong rebound once restrictions are lifted," says Bert Colijn, Senior Economist, Eurozone, at ING.