The British Pound came under fresh pressure against the Euro ahead of the weekend and extended its April decline to more than 2.0%, however a still-positive technical setup and solid underlying fundamentals lead some analysts to remain of the opinion a recovery can take place.

The Pound-to-Euro exchange rate (GBP/EUR) slipped to its lowest level since February 26 on Friday when it reached 1.1475, the EUR/GBP was quoted at 0.8715.

There was no discernible news to pin the declines on, but more and more analysts are awaking to the prospect of rising political anxieties related to the Scottish elections due in May.

"Investors have been reluctant to jump back into GBP longs and some caution may be warranted ahead of the Scottish parliamentary elections on 6 May – where the appetite for independence will be assessed," says Francesco Pesole, a foreign exchange strategist at ING Bank.

Currently the pro-independence SNP party remains on track to attain a majority in the Scottish Parliament and leader Nicola Sturgeon says this will give her party the mandate to pursue another independence referendum.

Westpac Bank suggest the GBP/EUR exchange rate's decline - which saw it return back to lows at 1.1468 on Friday - could be reversed thanks to existing positive fundamental and technical drivers.

Stephen Gallo, Head of European FX Strategy at BMO Capital, has assessed the latest lending data from the Bank of England and says the flow of money into the UK economy could boost the country's 2021 economic recovery.

The Credit Conditions Survey for the first quarter showed that commercial banks were planning a substantial increase in credit availability in the second quarter.

"The UK's banking system is likely to add a tailwind to the economic recovery over the balance of 2021," says Gallo. 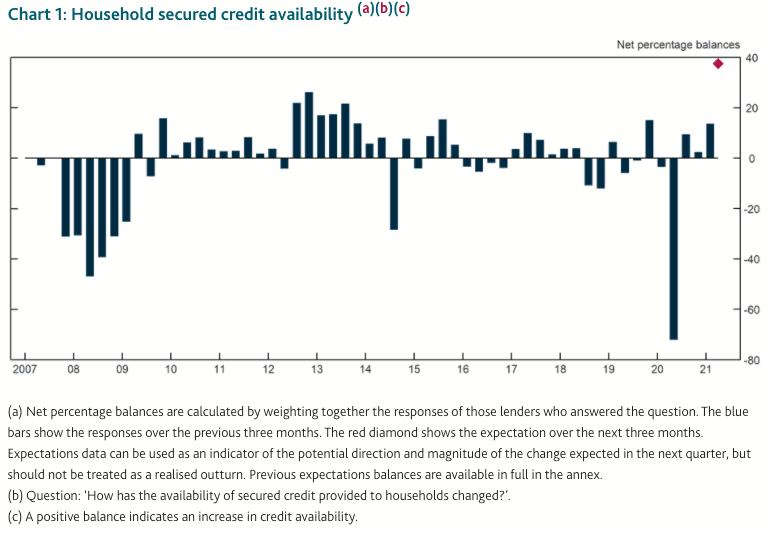 "The macro backdrop for the GBP still looks currency supportive to us, even once we've accounted for the potential drag on the GBP from the external deficit," he adds.

BMO Capital tell clients foreign interest in UK portfolio investment assets will increase over the balance of 2021, leading to a rotation away from loans & deposits on the liability side of the UK's external balance sheet.

The prospect of a further decline in GBP/EUR to below 1.1494 (above 0.8700 in EUR/GBP) cannot however be ruled out near-term, but BMO Capital see the medium-term macro-related trend in this pair being tilted towards the upside.

The Pound has been one of the big losers this April, with only the U.S. Dollar ceding more ground.

The recent decline in the value of Sterling against the Euro is attributed by analysts at Westpac, the Australia-based international lender and financial services provider, to three different factors.

Importantly for those looking ahead, all the factors cited are deemed to be temporary in nature and therefore allow for the prospect of a rebound in Sterling:

1) The UK has lost its initial vaccine-related advantage as the EU starts to see its vaccination programme pick up a head of steam.

The UK has signalled supplies in April would mean the number of first doses would be limited, particularly as the lion's share of the vaccine supply would form second doses.

Expectations for a dip in the pace of the rollout of vaccines has been cited by analysts as a potential reason for the Pound's turnaround in fortunes following a stellar first quarter to the year.

But, Westpac says this shift in performances is likely to be temporary as the UK deals with some supply issues and is likely to resume its vaccination pace to rollout second vaccinations in coming weeks.

Indeed, the government still hit its major target of offering those in groups 1-9 a vaccine by mid-April, and ministers maintain all adults will have been offered a vaccine come July.

2) Westpac notes tensions have been rising in Northern Ireland as Unionists have more violently expressed their concerns over the treatment of Northern Ireland within the agreed post-Brexit trade deal.

"It would now appear that the EU and UK are close to revising their agreements which should alleviate this tension. A swift resolution is needed to avoid any heightening of tensions into the traditional Unionist “Marching Season” into early July," Westpac tell clients.

3) Scotland's looming election cycle is cited as a potential reason to stay weary on the Pound, not only by Westpac but by other analysts.

Scottish Parliamentary elections on 6th May have highlighted the risk of SNP gaining a stronger polling and increasing potential for a call for another “once in a lifetime” vote on Independence.

"The combination has likely coincided with a turn in speculative positioning (CFTC GBP leveraged longs peaked in March) with two out of the three issues potentially unwinding now. Might the 6th May elections prove to be the trigger for another turn in trend?" ask Westpac.

Technical analysts at Westpac meanwhile say any strength in the Euro against the Pound should be sold into as the UK currency is liable to recover.

This technical view adds to the above-mentioned fundamental views and suggests any EUR/GBP strength - or GBP/EUR weakness if you prefer approaching the exchange rate from this angle - is likely to be limited in duration. 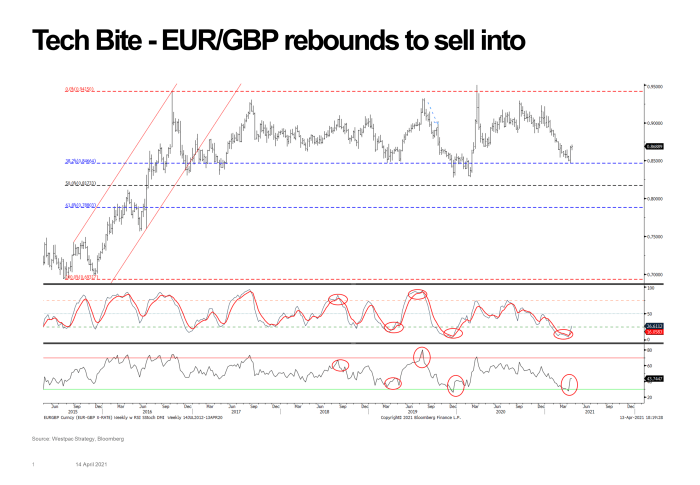 "The technical profile now suggests a period of corrections of the recent pullback from 0.9230 in November, this would suggest that the 0.8750-60 zone (a 38.2% retracement) would be the first likely resistance level though the style of the initial squeeze could allow for a sharper 50% rebound to 0.8850," says Westpac in a regular markets briefing and research note.

From a GBP/EUR perspective the levels in play are 1.0834 November low and the 38.2% retracement zone at 1.1428/1.1415 which is identified as an area of support to the recent weakness in Sterling.

"This profile provides the backdrop to build a long GBP positions into such corrective squeezes," says Westpac.