The British Pound starts the new week with renewed losses against the Euro and Dollar, but some analysts say the declines could soon start to fade and some bargain hunters could offer some support to Sterling.

The Pound-to-Euro exchange rate last week saw its largest weekly decline since September amidst a reversal of recent currency trends gripped markets, though Sterling would recover lost ground this week if prevailing rates around 1.15 succeed in drawing bargain hunters from the woodwork.

Sterling fell by more than two percent against the Euro in its worst week since the internal market bill debacle of September 2020, declining from 1.18 during the Monday public holiday to close the week just above the 1.15 handle and at its lowest level since early March.

The Pound was the worst performing major currency of the period but followed closely behind by the U.S. Dollar, which was the second worst, with commodity Dollars from Canada, Australia and New Zealand not far behind in price action that was incongruous with widespread gains for stock markets.

Given its work horse role within the UK's vaccination programme, now-dissipating uncertainty about the viability of Astrazeneca's vaccine may have led some observers and traders to infer risks to an outlook that's seen analysts and economists eyeing the UK for top of the recovery class in 2021.

But price action over on the continent as well as elsewhere in the market suggests strongly that Sterling's losses were the result of a global phenomenon where investors took profits on earlier bearish wagers against the single currency, of which the Pound-to-Euro rate was the single largest beneficiary.

"GBP felt the perfect storm of the vaccination concerns and the heavy one-way positioning. Prior to the sell-off, GBP was the biggest speculative long in the G10 FX space vs USD (as measured by CFTC). However, on vaccinations, the UK regulator pointed out that the balance of benefits and risks still favours the AZ vaccine," says Petr Krpata, chief EMEA strategist for FX and bonds at ING.

Krpata and the ING team say Sterling's fundamental appeal is still intact and are looking for EUR/GBP to decline back toward 0.85 over the coming days and weeks as a result, which would lift the Pound-to-Euro rate back to 1.1764. 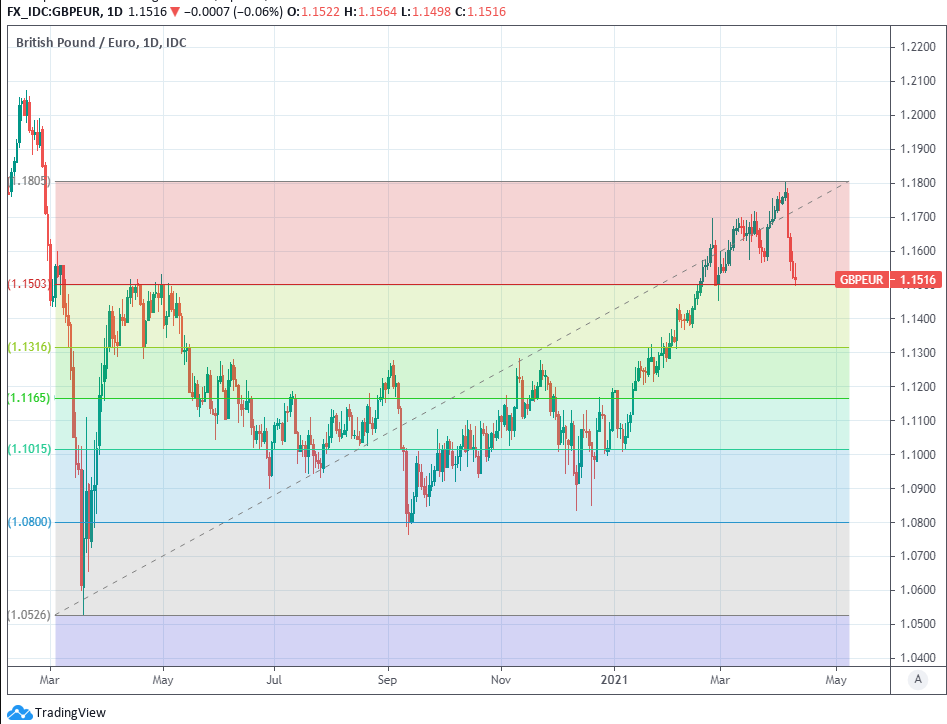 Above: Pound-to-Euro exchange rate shown at daily intervals with Fibonacci retracements of 2020 recovery.

"We expect sterling to recover fairly soon," Krpata says. "With the EU Recovery Fund stuck in a German courtroom, the EUR re-rating story may have to wait."

Pound-to-Euro rate declines came alongside the strongest Euro-Dollar performance since the week ending November 23 and the aftermath of the U.S. election, which indicates that much of the move lower in GBP/EUR was the result of investors booking profits on bets against EUR/GBP earlier this year.

Behind the screens, reversing bets against EUR/GBP involves a whole bunch of transactions where GBP/USD is sold and EUR/USD bought simultaneously. This would always lead to a lower Pound-Euro exchange rate.

"The last time EUR/GBP had a move higher like this was in late February, when risk appetite was broadly hit. The lesson then was that the pullback was an opportunity to add to GBP longs. We think this is similar, even though FX positioning is more crowded than before. The medium-term flows we are tracking suggest there is more GBP topside to come and this is likely just a speed bump along the way," says Jordan Rochester, a strategist at Nomura.

Similar is true of trades where investors had sold EUR/AUD, EUR/NZD and EUR/CAD, which were all popular in the months since January. And all of the above commodity currencies littered the lower portion of the major currency performance table last week, while earlier underperforming European currencies dominated the upper half. This was despite a strong performance from stock markets and other risk assets, which suggests profit-taking driving an unwinding of recent wagers across the board rather than in Sterling alone.

"The dollar bounced when yields rose sharply in January, and peaked when yields did, too. A 5% rally on the back of an 80bp rise in yields is a poor return and better European news can set the scene for the euro to make new highs for this cycle," says Kit Juckes, chief FX strategist at Societe Generale, citing scope for European bond yields to rise this summer. "A holiday-reduced week, with plenty of erratic moved, shouldn't be over-interpreted, however. We may have more choppy trading ahead before the dollar downtrend resumes."

Put differently, this was likely a position adjustment or repositioning of investors, which would have only temporary effects on both Sterling and the Euro. 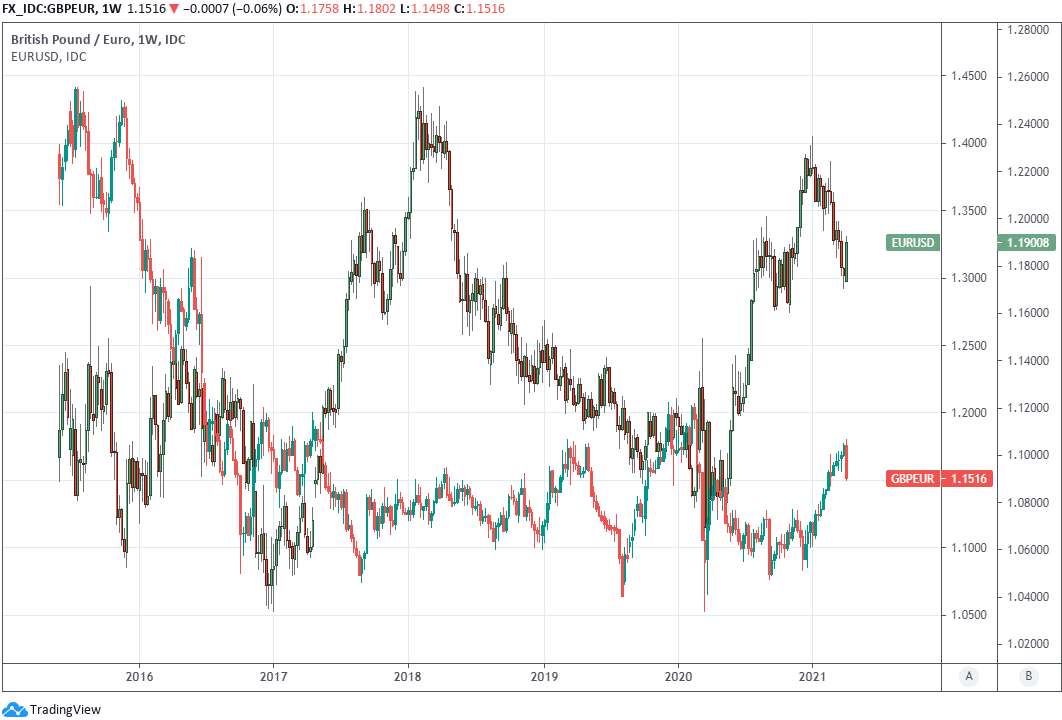 Above: Pound-to-Euro exchange rate shown at weekly intervals with EUR/USD.

There are several candidates to explain the positioning adjustment ranging from a 'buy the rumour, sell the fact' attitude toward the U.S. Dollar, to a combination of events closer to home for the Euro, where vaccinations are likely to pick up in the coming months and European Central Bank (ECB) officials suggested just last week they could end up tapering off their pandemic-inspired quantitative easing programme before the Federal Reserve.

"Through much of March we argued in favour of further USD strength on the premise that optimism over synchronised global growth had worsened leaving the US dollar to out-perform. We sense some shift in that and there are early signs of improved optimism. That has prompted us to turn more USD neutral, arguing for a period of range trading ahead with offsetting macro dynamics," says Derek Halpenny, head of research, global markets EMEA and international securities at MUFG. "We have therefore closed our EUR/USD short trade idea but remain long GBP/SEK although that trade has gone against us."

The rub for Sterling bears is that while the Euro-to-Dollar exchange rate may be in the process of bottoming out, it still lacks the strong fundamental recovery narrative that would be required for it to sustain a rebound and especially in any market where GBP/EUR is dragging its feet. Furthermore, and given the technical nature of at least some of last week's Euro-Dollar gains, declines in that exchange rate would lift GBP/EUR by default over the coming days if it ebbs lower to establish itself in a new trading range.

More so if this coincides with a stabilisation or recovery of the Pound-Dollar rate, as GBP/EUR always closely reflects relative moves in the GBP/USD and EUR/USD. There's little by way of significant economic data due from the UK to aid the Pound, although sentiment could potentially be lifted by the first stage of the UK's reopening, which sees supposedly non-essential bricks and mortar businesses permitted to trade again from April 12.

However, and despite the clear recovery potential this week, it may be the case that new highs over and above 1.18 are hinged on a broader recovery for European currencies in general. To the extent that this is the case, Sterling's short-term range would likely span the gap between 1.15 and 1.18, which is slightly lower than the 1.17-to-1.20 range previously anticipated by the author.