The Pound-to-Euro exchange rate starts the new week higher having ended the previous week on its back foot amid further turbulence in the American bond market but kept a toehold on the doorstep of 1.17, which it may overcome en route to new highs this week should the Bank of England (BoE) strike an upbeat tone at their Thursday policy meeting.

Pound Sterling ended the week on a stretcher after another blowout in the American bond market appeared to inspire profit-taking that wounded most risk currencies while lifting almost all U.S. Dollar exchange rates, although GBP/EUR was the least affected of all G10 Sterling pairs.

With the exception of the Canadian Dollar, many of Friday's underperformers were previously the week's outperformers, indicating profit-taking motivated by U.S. bond yields and improving prospects for the U.S. economy, although GBP/EUR remained on the doorstep of multi-year highs above 1.17.

"EUR/GBP remains under pressure while capped on the topside by the 20 day ma," says Karen Jones, head of technical analysis for currencies, commodities and bonds at Commerzbank. "The intraday Elliott wave counts continue to imply that the downside scope is limited." 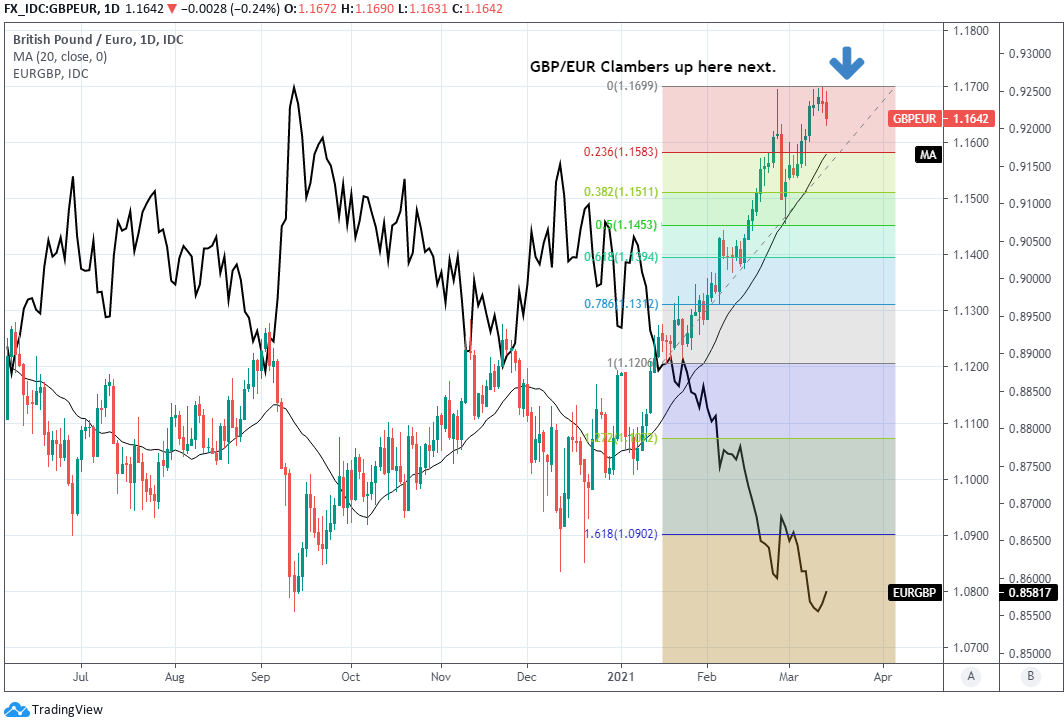 Jones says that while above 1.1584, GBP/EUR will retain an upside bias, a level that coincides with 0.8632 for EUR/GBP. This is both the 20-day moving-average for each exchange rate as well as the 23.6% Fibonacci retracement of the January 15 to present day extension of Sterling's recovery trend.

She and the Commerzbank team say that once above the recent high of 1.1697 the Pound would potentially have scope to rise as far as its May 2019 high around 1.1813, but that some technical indicators suggest it could struggle around 1.1775 with Sterling's overall upside "limited" for the time being.

The Pound-to-Euro exchange rate would need to fall below 1.1452, a level that coincides closely with the 50% Fibonnaci retracement of the January trend, in order for Sterling's upside impetus to be negated and for the Euro to get the upper hand from a technical perspective.

GBP/EUR is however supported by increasingly advantageous developments in the bond market, where the spread between 10-year British and German government bond yields has risen sharply in favour of Sterling and was implying on Friday that 1.17 is on the lower side of a happy short-term equilibrium.

"Unlike the ECB this week, we don’t expect the BoE lean against the rising bond yields," says Petr Krpata, chief EMEA strategist for FX and interest rates at ING. "GBP/USD to grind back towards 1.40 next week. We expect GBP/USD to rebound strongly from 2Q onwards, in line with the expected EUR/USD gains." 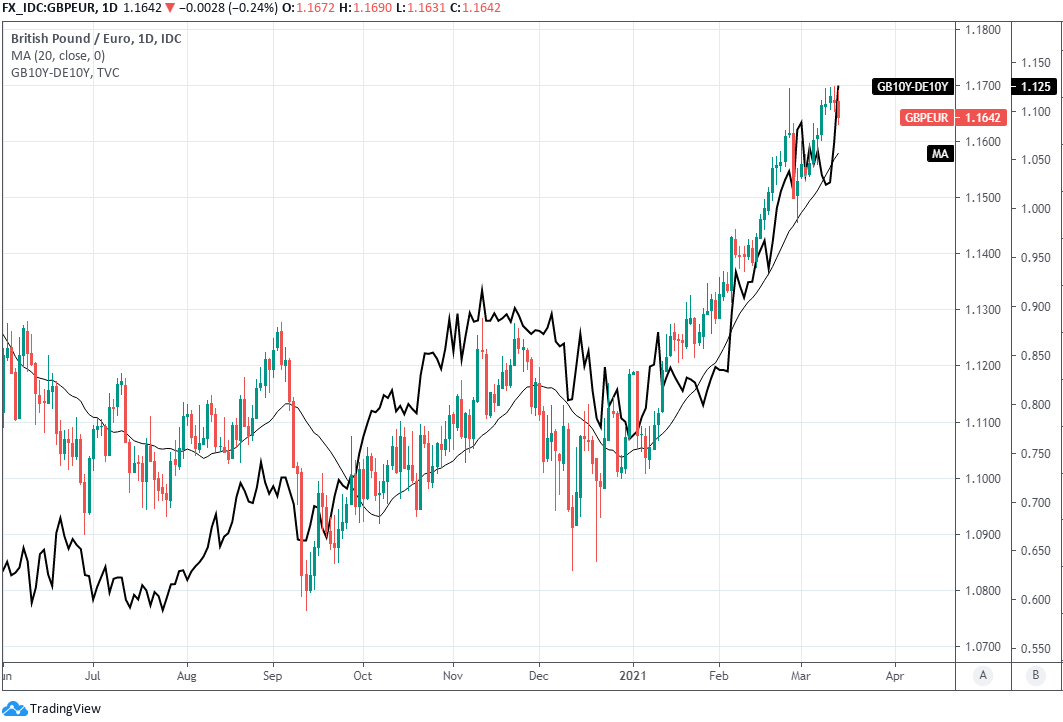 The Pound-to-Euro exchange rate would be found trading as high as 1.1764 this week if the Euro-Dollar rate continues to trade around 1.19 while, as ING expects, the main Sterling exchange rate GBP/USD heads back toward 1.40 or above. This outcome could be especially likely if the Bank of England does nothing to discourage recent developments in the bond market, or otherwise vindicates them in its March policy decision on Thursday, which is the domestic highlight of the week ahead for the Pound.

UK government bond yields have surged of late alongside U.S. and other international counterparts although unlike others, the BoE is not likely to protest about this. Rising yields are a natural consequence of combining the recovery that's in play with an economy that had little trouble meeting the 2% inflation target in recent years, and are doubly supportive of GBP/EUR in the current environment where just last week the European Central Bank (ECB) took action to prevent Eurozone yields rising too much.

"The worst of the effects from both COVID-19 and Brexit are now probably behind the economy and, as long as there is not another surge in virus cases, GDP should quickly climb over the next few months and reach the summit of its pre-pandemic level in early 2022. That’s why we think the Bank of England will diverge from the European Central Bank and suggest it has no plans to speed up its pace of asset purchases," says Thomas Pugh at Capital Economics.

Both the BoE and markets have recently expressed confidence that UK inflation will easily return to 2% or even above over the coming years, leading to expectations of a Bank Rate that rises from 0.1% as early as 2022 and sooner than in many other major economies. This is a fundamentally supportive development for Sterling and one the BoE is unlikely to discourage because both rising bond yields and the resulting increases in Sterling exchange rates provide policymakers with a form of insurance against any possible overshooting of the inflation target in the years ahead. 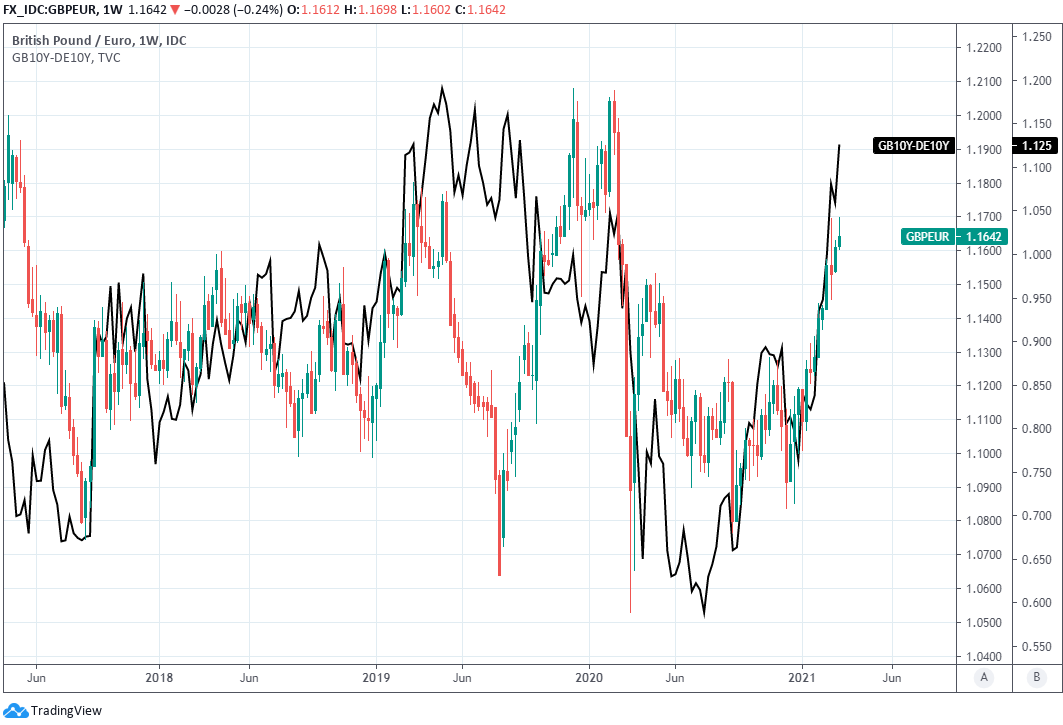 "January’s fall in GDP was far smaller than we had feared. We have regularly remarked that the consensus forecast of 4.4% GDP growth for 2021 is far too weak and adding the likely boost from relaxing restrictions to the higher starting point will push our new forecast towards 7%," says Andrew Goodwin, chief UK economist at Oxford Economics. "The resilience of the economy in January was broad-based. Adjustments to health output to incorporate the testing and tracing and vaccination schemes provided a sizeable boost. But there was also evidence of much greater adaptability across large parts of the private sector."

The UK is widely expected to feature among the fastest growing in the developed world this year thanks to a headstart vaccinating against the coronavirus - which could potentially afford a months-long headstart easing restrictions - and ongoing significant public support for the economy via HM Treasury. These factors are feeding the BoE and financial markets' confidence that the UK's inflation target will be met promptly, potentially making the BoE one of the first major economy central banks to begin lifting interest rates and "normalising" its monetary policy settings over the coming years.

"If I had to summarise the diagnosis, it’s positive but with large doses of cautionary realism," Governor Andrew Bailey told the Resolution Foundation last Monday during a speech in which he noted that the coronavirus has disrupted both supply and demand sides of the economy. "It is important to emphasise the role of the forward guidance that the MPC has adopted, and the announcements made a month ago on so-called toolbox issues."

The BoE's guidance is currently that “If the outlook for inflation weakens the Committee stands ready to take whatever additional action is necessary to achieve its remit," which means the Bank considers its inflation target to be effectively in the bag for the time being. This could see the BoE content on Thursday at 12:00 to just take stock of the better-than-expected GDP data for January and expansionary March budget that have emerged since its February meeting: an out and out positive for the Pound. 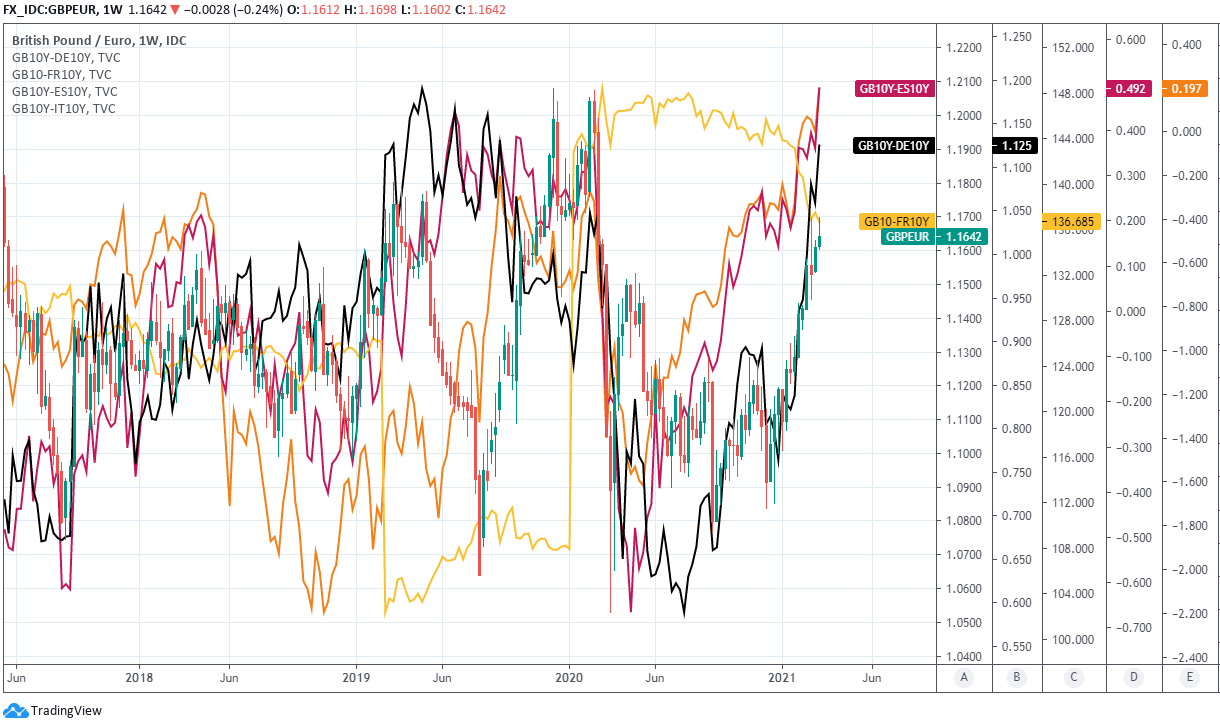