Pound Sterling extended its 2021 lead over a range of currencies including the Euro last week but could continue to confound market expectations over the coming days, as it plays an integral role in a broader uplift of European currencies, with nine-month highs above 1.15 now in the pipeline.

The Pound remained an outperformer of the fledgling year last week having swept aside less-than perfect economic data and rhetoric from the government suggesting that any reopening of the economy may be slower in coming to fruition than observers had previously anticipated.

"The pound has been one of the better performing G10 currencies in the year to date supported by both optimism on the economic outlook resulting from the UK’s rapid vaccine roll-out and relief that Brexit is finally complete," says Jane Foley, a senior FX strategist at Rabobank. "On the economy, last November’s pledge by PM Johnson that “things will look different by Easter” is beginning to appear optimistic. Despite the fast vaccine roll-out, mixed messages from ministers hint that some restrictions may remain in place for longer than expected. We maintain our medium-term target of EUR/GBP0.87 [GBP/EUR: 1.1494] but see plenty of scope for pullbacks for the pound."

Sterling ended the week above 1.14 against the single currency and has now risen 2.09% for 2021, giving it strong momentum, which technical analysts say could now lead the British currency back above 1.15  and to what would be nine-month highs over the coming days.

Technical analysts at Commerzbank are looking for EUR/GBP to slide further toward 0.8671, which would make for a Pound-to-Euro rate of 1.1532.

"EUR/GBP remains on the defensive following last week’s erosion of the 55 month moving-average support at .8790. This was negative price action and while we trade below the .8864/61 (lows seen in June, September and November) immediate attention will remain on the downside," says Karen Jones, head of technical analysis for currencies, commodities and bonds at Commerzbank. "Next support is the .8671 April low."

There has been a central bank bid for the Pound, coming from Asia, and one that has been key to a broader uplift among European currencies.

It will have to be sustained if the latter is to continue, given objections of the European Central Bank (ECB) et al to exchange rate appreciation, which indicates further outperformance by Sterling. 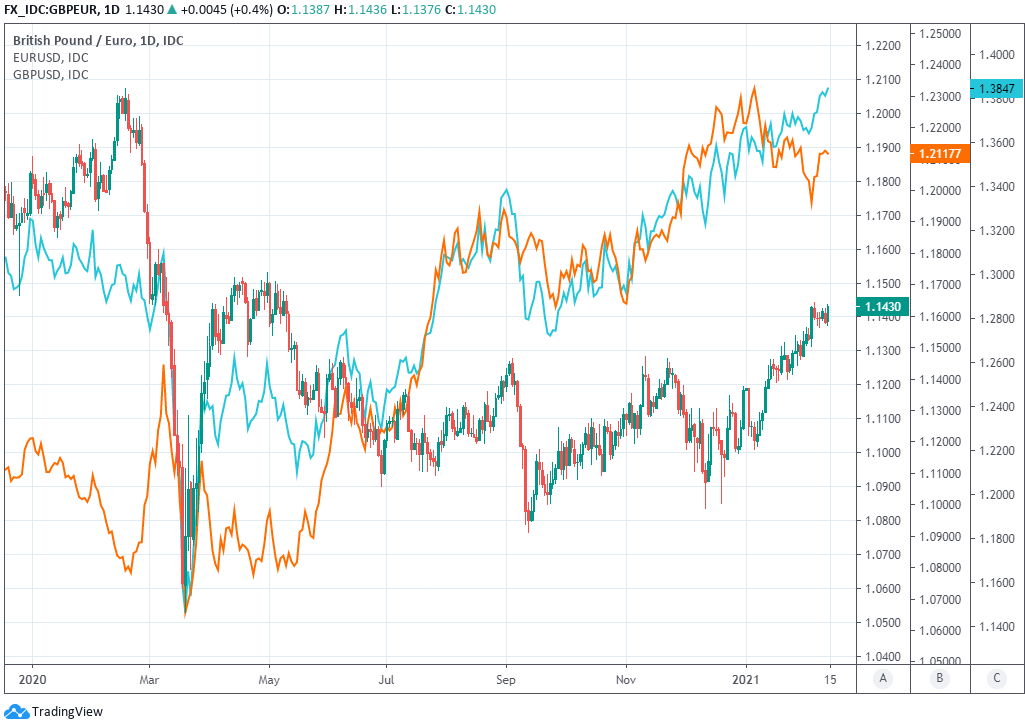 Above: Pound-to-Euro rate at daily intervals, with GBP/USD (blue) and EUR/USD (orange).

"The pound maintained upward momentum thanks to a correlation of 0.7 with the S&P and 0.6 with Brent," says Carole Laulhere, a strategist at Societe Generale. "Rate differentials moved hardly at all and sterling swept aside gloomy anecdotes on retail sales, a sharp fall in foreign trade with the EU and the decline in the UK's share of swaps and stock trading since 1 January, with EU centres gaining market share. The housing market is also showing signs of cooling as we approach the end of the stamp duty holiday in March, and tempers flared with the EU over the implementation of border checks in Northern Ireland. GBP/USD didn't flinch and advanced to a trend high."

Many observers have noted in the last week the less-than optimal conditions for outperformance by Sterling, an outperformance that has seen its correlation or 'beta' to risk and commodity assets increase.

Britain's departure from the European Union and January exit from the transition period made many sceptical that Sterling would appreciate so soon.

You think US money supply is surging?

China increased theirs by $5.4T since March.

Their money supply is now 81% larger than the US. pic.twitter.com/os3GNO7NUO

Many are also still sceptical that Sterling could continue to appreciate after its January and February outperformance.

Pound Sterling Live understands that changes in Sterling's correlation with the Yuan are more significant than they are with other risk or commodity assets.

This is more noteworthy in the context of Sterling's nascent and likely-continuing outperformance. This could be rooted in the appeal of European currencies more generally, to central bank reserve managers in Asia.

"The lack of an abundantly clear approach from the US side means at least two things: 1) the PBoC will solely determine the pace of RMB appreciation based primarily on what suits China, and 2) there is a gap for Chinese officials to fill on multiple geopolitical fronts in order to test how the US side will respond (or if it will respond at all)," says Stephen Gallo, European head of FX strategy at BMO Capital Markets. "Should any of these steps raise geopolitical tensions, or push the envelope on supporting China's BoP, we struggle to see why USDCNH would decline sharply in those scenarios." 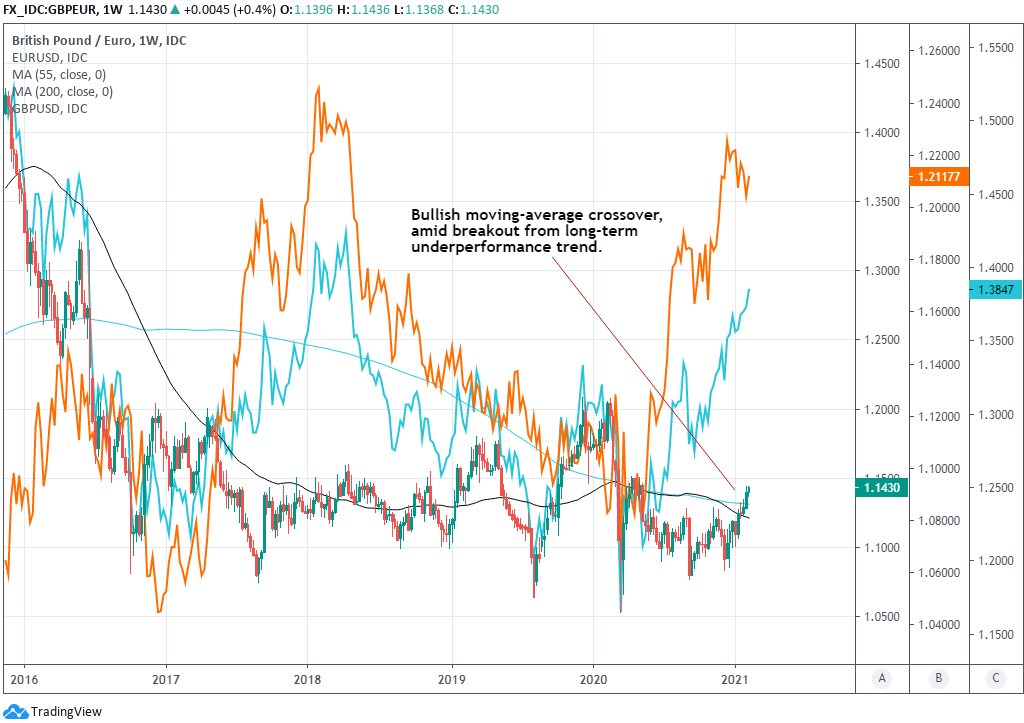