- GBP/EUR charts point higher at start of another crunch week.

- Market looks to Bank of England on Thursday.

The Pound starts Monday relatively unchanged, ensuring it holds onto the 1.0% gain registered against the Euro in the previous week and the GBP/EUR exchange rate could be in for further gains over coming days if studies of the charts and the market's evolving view on the Bank of England (BoE) outlook are anything to go by.

Sterling was one of only two major currencies to get the better of the Dollar last week and scored one of its best gains over the low-yielding Euro after economic data lead markets to rethink their expectations of Thursday's interest rate decision from the BoE. Market pricing still implies that a rate cut is highly likely although to a lesser extent than at the beginning of last week.

"Newsflow surrounding the coronavirus might keep sentiment on edge," says Mark McCormick, head of FX strategy at TD Securities. "Our focus shifts to the EUR and GBP. Eurozone HICP will garner more interest following the ECB's slightly more constructive sentiment on underlying inflation dynamics. Meanwhile, the BOE meeting appears to be a close call following better PMI prints. Despite this, we maintain our call for a cut and expect GBP to underperform vs. USD and EUR."

The jury may be out on whether the BoE's Thursday decision can aid Sterling this week, the charts are suggesting the market wants to take Sterling higher.

Technical analysts at Commerzbank say Sterling will retain an upside bias so long as the Pound-to-Euro rate holds above 1.1619, and it remained comfortably ahead of that threshold on Friday. 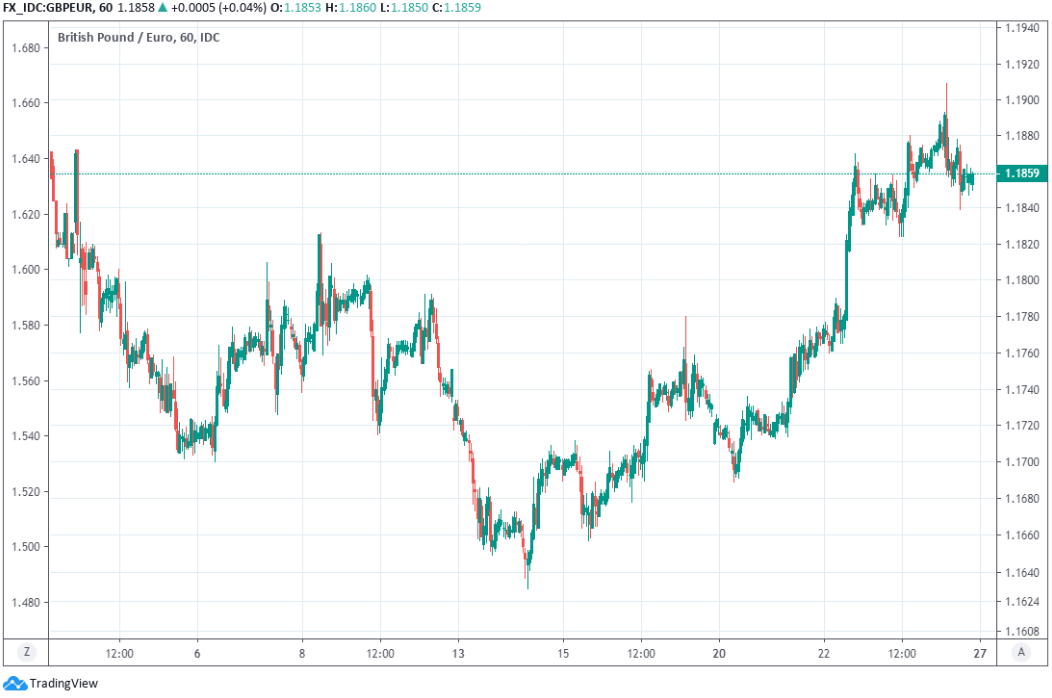 Jones says the recent break above the 1.1830 level in the Pound-to-Euro rate was a bearish development for the Euro that has put the December high of 1.2137 back on the table for Sterling. She says the Pound could face minor resistance at 1.1914, which coincides with the 0.8393 level of EUR/GBP, but also tips a break above December's high and return to the 1.2318 level as a viable prospect for the next three months. 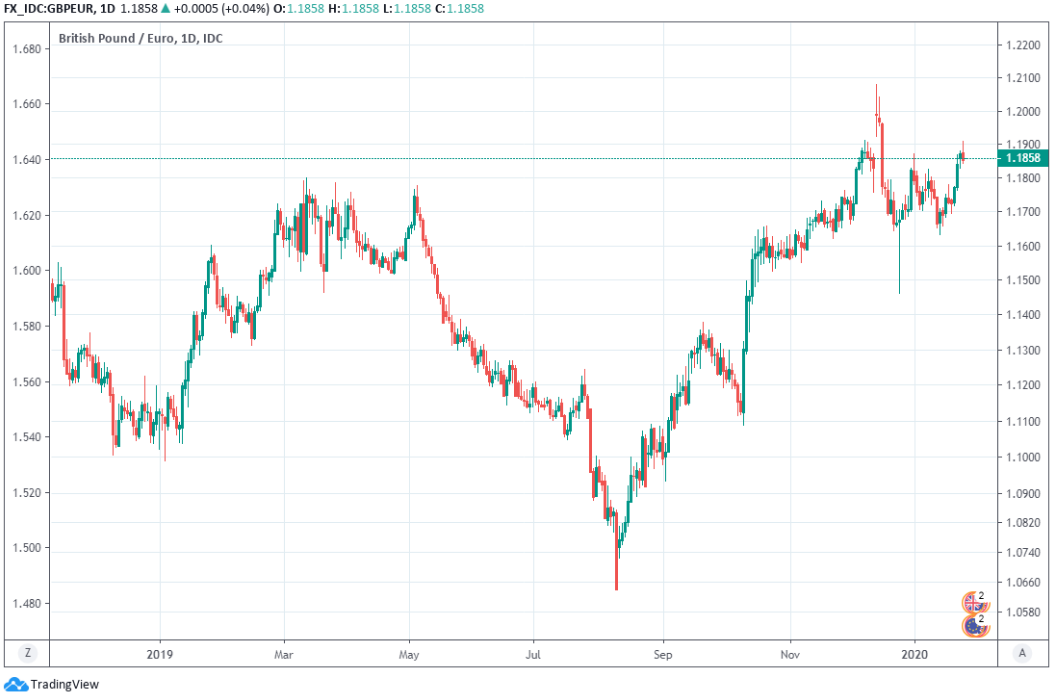 Pound Sterling: What to Watch this Week

The Pound was the second best performing currency for the week by the Friday close but could go on to extend gains over the coming days if the Bank of England refrains from cutting interest rates Thursday.

Sterling was soft last week before strengthening from Tuesday after December's jobs and wages data surprised on the upside, giving investors cause to pare back some of their earlier bearish bets on the British currency ahead of this Thursday's eagerly-awaited decision from the BoE. That move was aided Friday by IHS Markit PMI surveys that pointed to a stronger-than-expected uptick in services and manufacturing activity for January.

Brexit Day on Friday, 31 January will doubtlessly garner many column inches in the week ahead although the date will mark an EU exit that wholly technical and legalistic in nature so will matter little for the immediate prospects of Pound Sterling. Price action in the UK currency will instead be determined by speculation ahead of Thursday's interest rate decision from the BoE.

The consensus among economists and analysts is for the Bank of England to leave Bank Rate unchanged at 0.75% at 12:00 Thursday although that view is in now way reflected by pricing in the financial markets, with pricing in the overnight-index-swap (OIS) market implying on Friday morning a January 30 Bank Rate of just 0.55%. Market pricing implies around an 80% probability of a rate cut this week but economists say it won't happen and only one can be right.

"Hard UK macro data such as retail sales and GDP have made it clear that the economy had a dismal fourth quarter, in large part due to political uncertainty from the general election and the risk of a no-deal Brexit," says Ranko Berich, head of market analysis at Monex Europe. "The MPC must balance the significant slowdown in growth seen in Q4 against the probable recovery that currently appears to be happening."

BoE Governor Mark Carney and various other Monetary Policy Committee members said earlier this month they'd vote for a rate cut Thursday if they did not see signs of improvement in the New Year economy before then. So Friday's PMI data could excuse the BoE for eschewing a rate cut this week but the surveys have often proven to be unreliable indicators during times of political uncertainty and the bank itself was bitten for having put faith in them in the immediate aftermath of the referendum.

Furthermore, Thursday's meeting marks the final outing of Governor Mark Carney as chair of the MPC because he's set to depart the bank on March 16, and so his last opportunity to engineer a rethink of the MPC's long-held contention that interest rates will need to rise from current levels over the coming years in order to keep inflation in check. That idea explains why the BoE has left bank rate unchanged since August 2018 despite most other comparable central banks having cut rates.

"Our economists expect the bank to err on the side of caution and to remain on hold," says Chris Turner, head of FX strategy at ING. "The scale of the GBP upside may not be pronounced as the uncertainty about the UK economic data and the tightest voting margin behind the BoE decision not to cut rates suggest that the market will continue pricing a non-negligible probability of a cut in coming months. So the market will postpone the expectations of the cut rather than fully reverse it."

Carney and colleagues have argued higher rates will be necessary because the Brexit vote has reduced the UK's growth 'potential' and left the economy more susceptible to inflation, despite the consumer price index having been in decline since November 2017 when it was recorded at 3.1%. Inflation was just 1.3% in December, far below the BoE's 2% target, while the economy is growing beneath its 'potential' or inflation-producing rate of expansion.

Given current market pricing any rate cut may deliver only limited downside to Sterling unless the BoE hints that further cuts could follow in the coming months. And given the bank may yet decide to eschew a cut, the potential upside could be greater than the downside this week.

However, international factors will also be in the mix and could see other currencies advance on Sterling. Notably, Eurozone growth and inflation figures as well as the January Federal Reserve (Fed) rate decision.

Pound Sterling Live previously reported that there would be an autumn forecast statement on Wednesday 29, January. This resulted in part from an error made by a third party data provider. The budget will not be released until March 11.

The Euro was among the worst performing major currencies last week as investors appeared to favour higher-yielding and safe-haven assets over lower-yielding or riskier alternatives, although the single currency's trajectory in the coming days will be determined by a combination of factors.

Europe's single currency may face competition from safe-havens to start the week after China's National Health Commission said the country's new coronavirus can be transmitted from human-to-human even in its incubation stage - in other words before sufferers begin to display observable symptoms. The number of infections more than quadrupled last week to 1,975 by midnight Saturday while the number fatalities rose to 56.

"The main risk in the short term is not disappointing EUR data, as we expect a bounce in the German Ifo next week, or even US PMIs continuing to recover, instead it’s the recent pickup in EUR’s correlation with CNH. Developments on the coronavirus during the LNY will be key for EURUSD here and the risk-reward will be for a lower EUR until it becomes clearer what may happen next," warns Jordan Rochester, a strategist at Nomura.

However, Monday's survey of German businesses from the influential Ifo institute could offer the Euro some support, if not cause for gains, so long as it confirms the optimism detected by last week's ZEW survey. The ZEW survey showed both current conditions as well as sentiment around the six-month outlook rising handsomely in January and given that an economic recovery in the Eurozone is key to the Euro's future fortune, any rebound in the Ifo may help arrest last week's decline in the single currency.

Consensus is looking for the Ifo index to have risen from 96.3 to 97.1 when the figure is released at 09:00 Monday. The Euro may be more sensitive to an upside surprise than a downside move given the single currency has fallen toward the bottom of a multi-month range over the last week. The European Central Bank (ECB) is also not expected to cut its interest rate again at any point soon, which somewhat insulates the Euro from the effect of adverse data.

"The euro has clearly been hit this week from the global growth uncertainty linked to the risks of an escalation of the coronavirus. This is a risk of course next week if there are further signs of escalation," says Derek Halpenny, head of research, global markets EMEA and international securities at MUFG. Political uncertainty in Italy [is] unlikely to last. If the IFO Business Climate Index on Monday then reinforces the perception of an upturn in business confidence, we see reason for any downside in EUR to reverse – although of course volatility remains low and hence moves are likely to remain modest."

The Ifo survey will give markets a glimpse of what might be around the corner for the Eurozone while GDP figures due out at 10:00 Friday will provide insight into the condition of the economy at year-end. At the same time Eurostat will reveal whether the December inflation rebound back to 1.3% endured through January. Both of those numbers, which are out at 10:00 Friday, will be important for sentiment toward the Euro over the coming weeks.

Consensus is looking for Eurozone inflation to have risen from 1.3% to 1.4% this month although it's also looking for the more important core measure of price growth to have dipped from a multi-year high of 1.3% back to 1.2%. The core benchmark has held at 1.3% since November and any continued resilience would likely be welcomed by the single currency because it could be interpreted as progress made by the European Central Bank in its efforts to deliver the "close to, but below 2%" inflation target.

However, and especially as it relates to the Euro-to-Dollar rate and Euro-to-Pound, other international factors will also be in the mix including interest rate decisions from the Federal Reserve and Bank of England that will be sure to impact trading in the Pound and Dollar.