- EUR pops after sharp rise in ZEW survey for January.

The Euro may have been saved from a deeper sell-off higher Tuesday after the January Leibniz Centre for European Economic Research (ZEW) survey showed corporate confidence recovering notably in the wake of this month's 'phase one deal' to suspend the trade war between the U.S. and China.

Germany’s ZEW institute said Tuesday that analysts became more optimistic in their assessment of their current economic situation as well as the outlook in January, before announcing matching improvements for the Eurozone.

“The continued strong increase of the ZEW Indicator of Economic Sentiment is mainly due to the recent settlement of the trade dispute between the USA and China. This gives rise to the hope that the trade dispute’s negative effects on the German economy will be less pronounced than previously thought," says Achim Wambach, president of the ZEW Institute.

The ZEW Indicator of economic expectations rose 16 points to 26.7 this month, leaving the index measure of the six-month outlook to its highest level since July 2015. Germany's current situation index rose 10.4 points to -9.5.

And for the Eurozone the ZEW Indicator rose 14.4 points to 25.6 while the current economic situation index advanced 4.8 points to -9.9.

"The details reveal that analysts' inflation expectations are now rising slightly, across most major EZ and global economies, a shift that carries over into rising short-term interest rate expectations. The only notable example here is the U.K. where short-term rate expectations have declined, thanks to speculation that the BoE will cut later this month. Note that this is not our base case," says Claus Vistesen, chief Eurozone economist at Pantheon Macroeconomics. 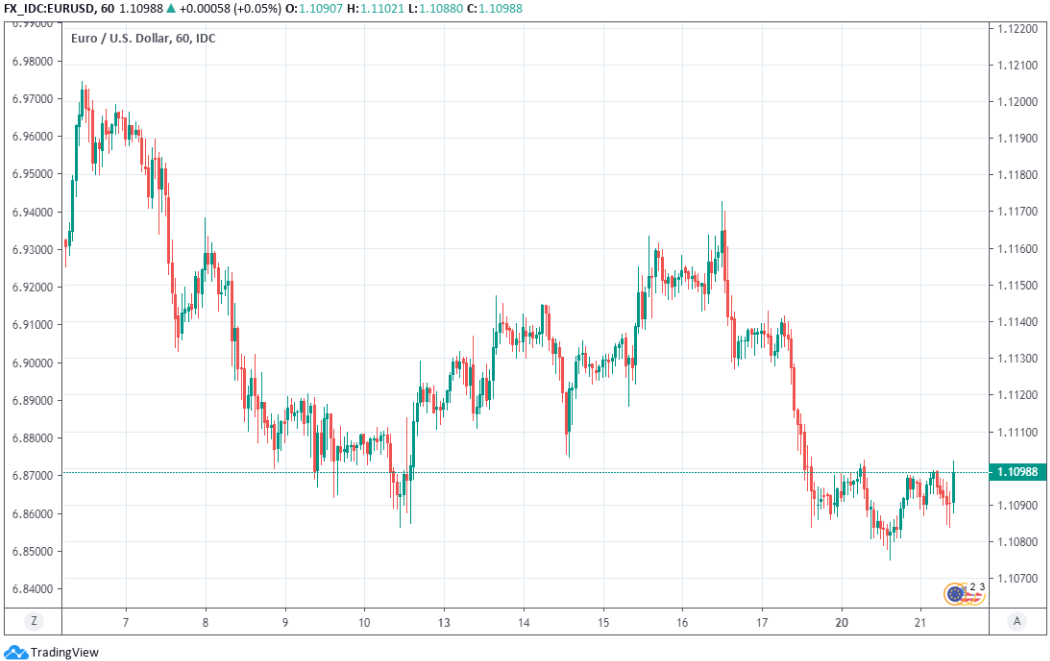 The ZEW is a German survey that asks 300 financial experts for their opinions on various questions relating to the markets and economy. The improvement in the future outlook was attributed to hopes of a deal that ends the U.S.-China trade war and the improving odds of a delay to the Brexit process.

"EUR/USD has sold off towards and is currently holding the uptrend at 1.1069. The intraday Elliott wave signals are neutralising and ideally this will hold, however the risk remains for a possible break lower and this would target the 1.0981 29th November low and neutralise the immediate outlook. Initial resistance is the 1.1134 200 day m.a," says Karen Jones, head of technical analysis at Commerzbank in an early morning note to clients.

There had been uncertainty about whether the single currency would be above to avoid a break below a key support level located at 1.1069 on the charts over the coming days although if Tuesday's bounce is sustained then the Euro-to-Dollar rate may be able to avoid a fresh trip down to 1.0981. However, Jones says there's a notable resistance level at 1.1134, which is not far above the current market and is also the location of the 200-day moving-average. 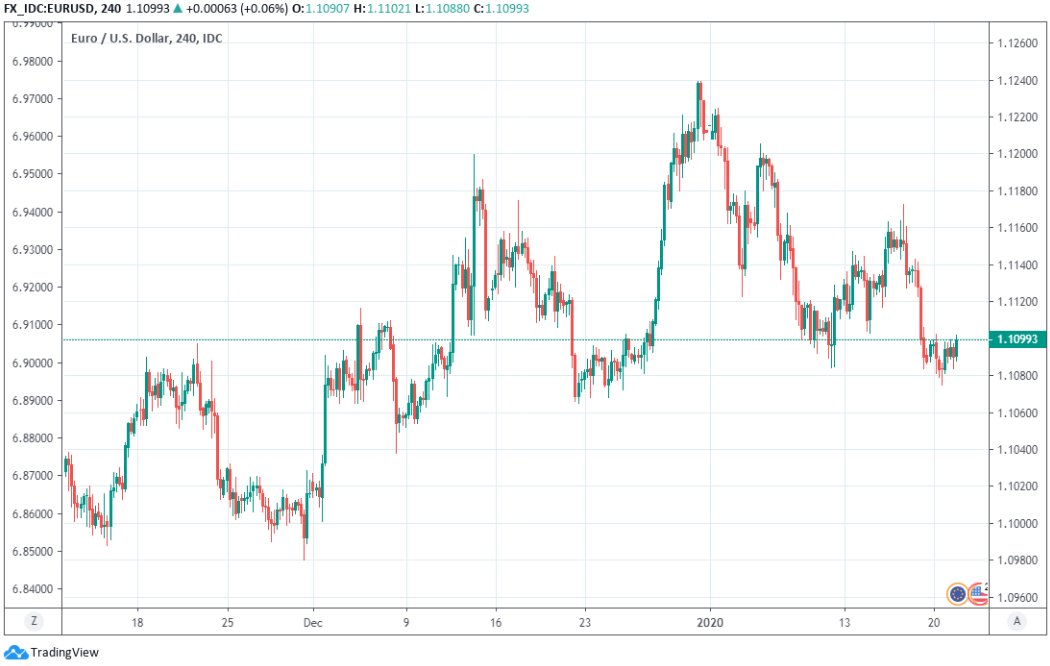 Tuesday's ZEW survey comes barely more than a week after the U.S. and China signed the phase one deal to suspend the trade war that had crushed the Eurozone economy in 2018 and 2019, even if its effects were felt mostly in the industrial powerhouse economy of Germany.

It also comes just days out from Thursday's European Central Bank (ECB) rate decision and as markets celebrate a U.S. and French decision to discuss digital taxes for a year rather than fall out over the new French levy.

Markets will scrutinise Thursday's 12:45 ECB statement for clues on the outlook for interest rates, inflation and economic growth as well as hints on whether the bank will  use its financial muscle to give governments a hand in efforts to address climate change. But rhetoric from President Donald Trump and other policymakers attending the Davos gathering, as well as headlines about the Asian coronavirus, could be more of a short-term influence on the Euro.

Investors will also be watching Washington for signs of movement on a fiscal stimulus ahead of the November election. The election could weigh on the Dollar if campaigns lead investors to question the continuity of Trumpian economic and foreign policy, while further fiscal stimulus might encourage markets to fret over the so-called twin deficits. And those latter concerns could be positive for the Euro-Dollar rate, although some strategists disagree.

"Those expecting a broad-based dollar bear trend in 2020 have so far been frustrated. True there has been a re-rating of commodity currencies and Asian FX on the US-China trade deal, but in the G3 space the dollar is holding its gains," says Chris Turner, head of FX strategy at ING. "The prospects of a Republican Tax Cut 2.0 should be watched closely – a dollar positive." 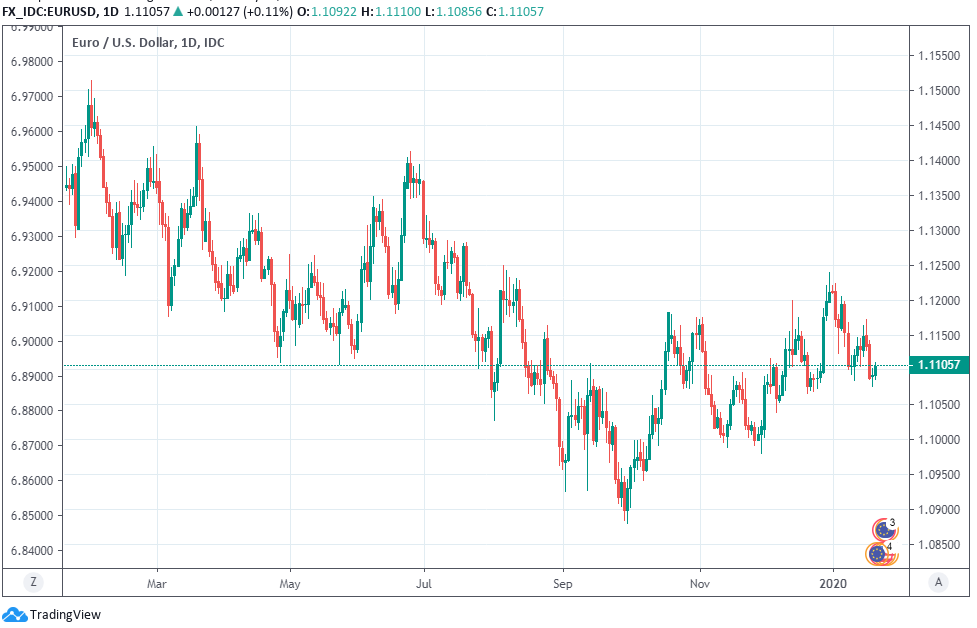