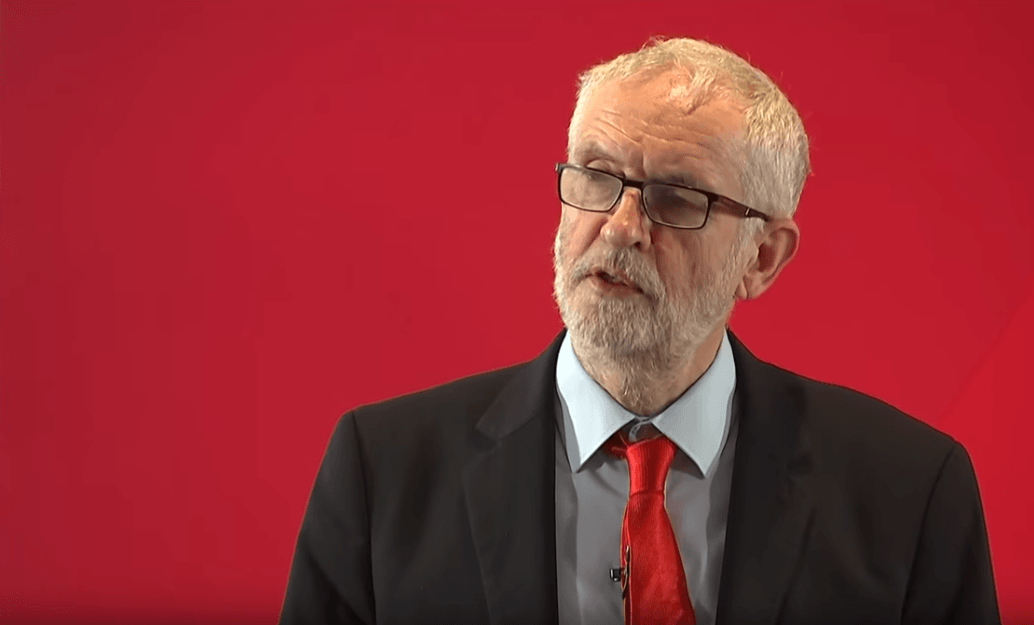 Pound Sterling continues to swing to the tune of the polls, with the UK currency catching a bid over the past 24 hours after a new poll showed the Conservative Party of Boris Johnson have pulled ahead against their closest rivals, Labour.

The advance, by the Conservatives comes largely at the expense of the Brexit Party, which this week announced it would not be fielding candidates in existing Conservative seats.

According to the latest set of YouGov polling for the November 11 - 12 period, the Conservatives are on 42%, up 3 points on a similar poll conducted on November 08.

Labour have also seen their vote share grow, up 2 points to 28%.

This gives the Conservatives a 14 point lead over their rivals, which suggests a comfortable majority in the House of Commons is at hand.

The British Pound is showing a positive correlation to any developments that suggest a stable, majority government will be able to form following the December 12 vote. A Conservative majority would swiftly pass a Brexit deal in early 2020 that would put to rest years of uncertainty over the matter, and allow businesses to release pent-up investment.

"Crucially it could also give Johnson the political breathing space to extend the transition period – and commit to the associated EU budget payments," says James Smith, Economist for Developed Markets at ING Bank in London.

Any other outcome, particularly a hung parliament, throws open the door to months of further uncertainty, something Sterling dislikes. 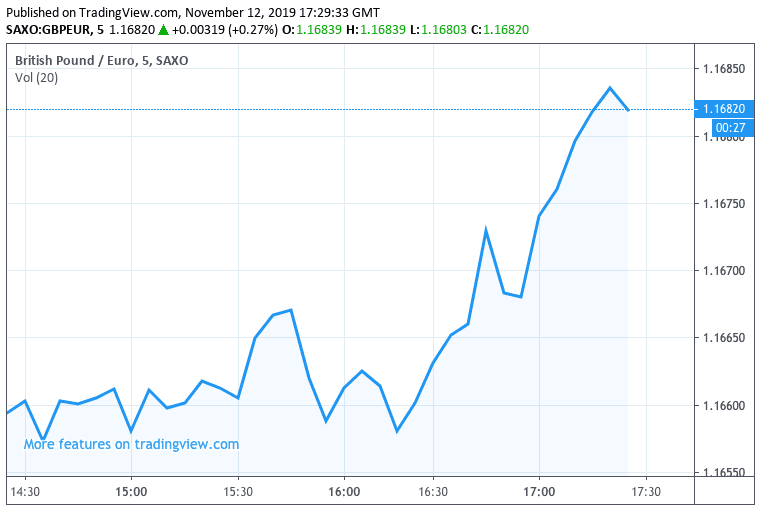 Above: Sterling ticked higher on the release of a YouGov poll on Tuesday afternoon.

The polling shows Liberal Democrats have shed 2 points to poll on 15%.

The Brexit Party who have lost 6 points to poll at 4%, putting them on an equal vote share to The Greens.

YouGov asked the "traditional question" where respondents are shown a list of all the parties and ask how they would vote in an election tomorrow.

The respondents were then shown a list of the parties and candidates who are likely to stand in their own seat, and asked which of them they would vote for.

The two different results are shown below: 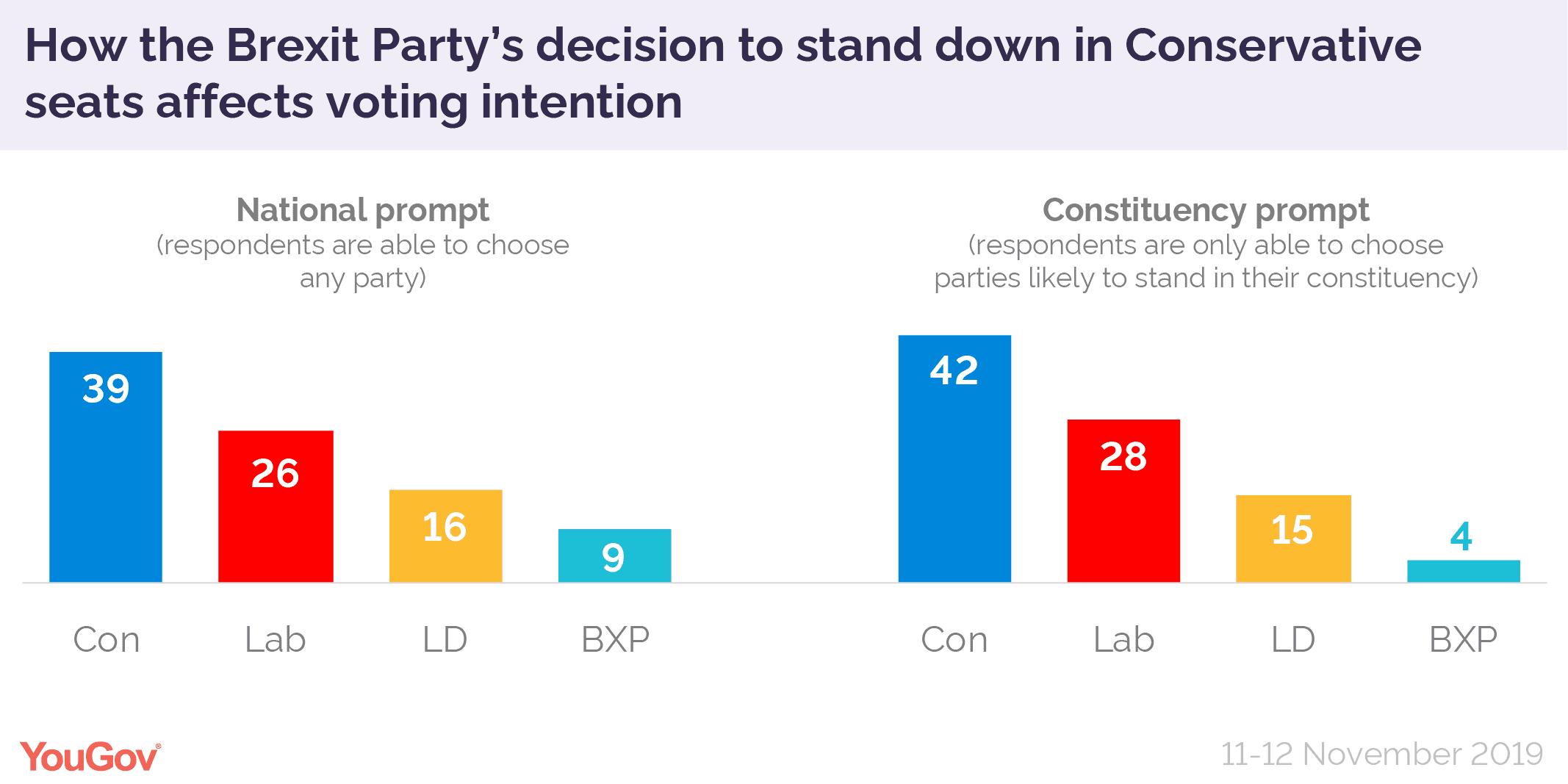 "Taking away the Brexit Party in almost half the seats halves their support, from 9% to just 4%. The vast majority of this support seems to transfer directly to the Conservative Party," says Wells. "The end result is that the Conservatives continue to enjoy a lead in the low teens, with four weeks to go until election day."

Given the impact that candidates standing down in seats has on the total level of party support, YouGov say they will continue to use the candidate prompt in the run up to the election.

Foreign exchange markets are particularly attuned to YouGov polls owing to their track record for accuracy over recent years. It was YouGov that first picked up the dramatic loss of support for Theresa May in the 2017 General Election, and their polls most accurately predicted the final outcome.

Should a majority Conservative government be delivered on December 12, ING forecast the Pound-to-Euro exchange rate will rise to 1.2048.

The Pound-to-Dollar exchange rate is forecast to rise to 1.33.

While the latest poll will make good reading for the Conservatives, one foreign exchange analysts warns it should be approached with caution.

"Note that the collapse in the Brexit Party share (to just 4%), which is the counterpart, reflects a change in the polling methodology to reflect the seats they are not standing in. So, the rise in the Tory share is likely to be concentrated in seats they already hold and this poll is not compatible with previous polls," says Adam Cole, a foreign exchange strategist with RBC Capital Markets.

We would expect any strength in Sterling to ultimately remain relatively muted going forward as predicting the upcoming election will remain incredibly difficult, and the first-past-the-post electoral system in the UK means the conversion from vote share to actual seats is difficult to predict.

This is more true than normal, owing to the potential for the vote to split along Brexit lines i.e. leave vs. remain.

"We would suggest treating polls, and predictions based on them, with some caution in the coming days and focusing more on what the bookies and prediction markets are telling us," says Cole.

We continue to follow the odds being offered by the UK's largest betting exchange, the Betfair Exchange. At the time of writing the implied odds of a Conservative majority stand at 60%, this up from the 40% probability ahead of the Brexit Party announcement to withdraw their candidates.

Thursday is the final day for parties to submit their candidate list, and there is speculation that the Brexit Party could yet offer further concessions, although they have denied any will be forthcoming.

However, on current polling it would be difficult for the Brexit Party to justify anything other than targeting a select handful of seats to maximise on what vote share they do have.

Such an outcome would offer the Conservatives a further advantage, which could allow Sterling to eke out further gains, but should the Brexit Party remain resolute, we would expect Sterling to remain stuck around current levels for over coming days.

"I’m surprised by how limited the rally has been, GBP/USD up only 80bps or so. The market is on balance inclined to believe the polls, but is still scarred by the 2017 experience to fully commit to the Tory majority scenario until closer to the time. It doesn’t help that from a polling trend perspective, it looks spookily like 2017 again with both Labour and the Conservatives marginalising the smaller parties and enjoying a 'day one' bounce," says Jordan Rochester, a foreign exchange strategist with Nomura. "A lack of a sustained rally in GBP further emboldens the view that folks are unwilling to buy into the end game trades this early on in a campaign. Given I expect polling between Labour/Tories to narrow as the campaign develops (Labour manifesto launch and reception by public will be key)."

Nomura remain 'long' EUR/GBP, "as a lot of good news is in the price this early on in the campaign."

Being 'long' EUR/GBP means selling the Pound and buying the Euro.