The Pound-to-Euro exchange will fall back down towards 1.11 if analysts at a leading Scandinavian Bank are correct in their expectations and the UK requests another Brexit extension of the EU before the October 31 Brexit deadline.

"GBP has rallied massively in the last few days, as optimism has risen. But as has often been the case, the devil is in the detail. It is still unknown what such a deal might be and, if a deal will go through UK parliament - though speculation on both topics is plentiful," says Mikael Olai Milhøj, Senior Analyst at Danske Bank. "To us it seems unlikely a deal can be reached ahead of the EU summit, especially when the EU is still sceptical towards some of the elements in the Varadkar-Johnson understanding."

The measured assessment by the Danske Bank analyst follows a strong two day run higher in the value of the Pound that saw GBP/EUR rise from 1.1086 to reach 1.15. Pound Sterling rallied by over 2.0% against the Euro as the prospects of the UK and EU reaching a Brexit deal rose following a meeting between the leaders of the UK and Ireland, at which it was agreed there was a clear route forward to striking an agreement.

Furthermore, "they agreed that they could see a pathway to a possible deal."

Many with Sterling-based international payments will understandably be asking whether the positive momentum sparked last week can translate into yet further gains this week. Of course, whether or not the Pound gains or falls will ultimately depend on how Brexit negotiations progress.

The UK has proposed fresh ideas on how to solve the Northern Ireland border conundrum, and Ireland's hint that the proposals can work reenergised Brexit negotiations and propelled Sterling to its largest daily jump since March. 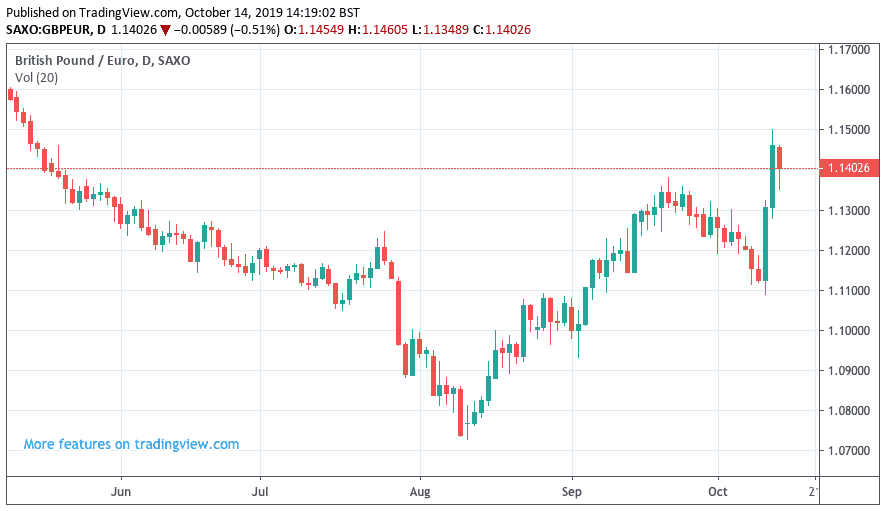 Most analysts are in agreement that a Brexit deal represents a positive route forward for the UK economy and investors; it is therefore an outcome that is expected to result in notable gains in Sterling.

Danske Bank forecasts show that were a Brexit deal to be struck - and ratified by Parliament on Saturday - then the GBP/EUR exchange rate can rally up to 1.1628.

However, Danske Bank maintain a 'base case' that Brexit negotiations with the EU will either fail, or any deal will be voted down by Parliament. It is incredibly hard to call Sterling's outlook when it is being driven by political headlines - as is the case now - but analysts at the leading financial institutions are able to give a call based on the odds they give to each possible outcome playing out.

"The pathway is still full of obstacles. First of all time is very limited, as a deal must be reached no later than Tuesday 15 October, if a deal is to be ratified at the EU summit on Thursday-Friday. Also, the rest of the EU system is less upbeat than the Irish and think a lot of work still has to be done," says Milhøj.

As such, an extension will be called, resulting in the GBP/EUR exchange rate falling back down to 1.11.

Sterling has fallen at the start of the new week, as the euphoric rises seen last week give way to a more measured assessment of the current Brexit environment.

EU officials and diplomats are playing down prospects for a breakthrough in the coming days, with one senior figure saying a deal at the summit would be "ambitious", says Tony Connelly, Europe Editor for Irish state broadcaster RTÉ.

"Following two days of intensive talks the two sides are still far apart on customs. The EU side continues to have grave concerns about the UK proposals to keep NI in the UK customs territory, with Theresa May's old Customs Partnership idea being recycled and adapted for NI," says Connelly.

In light of developments it appears markets will be prepared to adopt a wait-and-see approach to Sterling before making any major directional decisions on the currency ahead of the crunch European Council summit starting on Thursday, where it will be known if the two sides have struck a deal.

"Last week made clear that the speculative shorts weren’t ready for the good news, but this latest move has likely cleared a significant portion of those shorts, and the path to Brexit still remains tricky. Price action could prove treacherous in both directions in the near term," says John Hardy, an analyst at Saxo Bank, commenting on the Pound's outlook for this coming week.