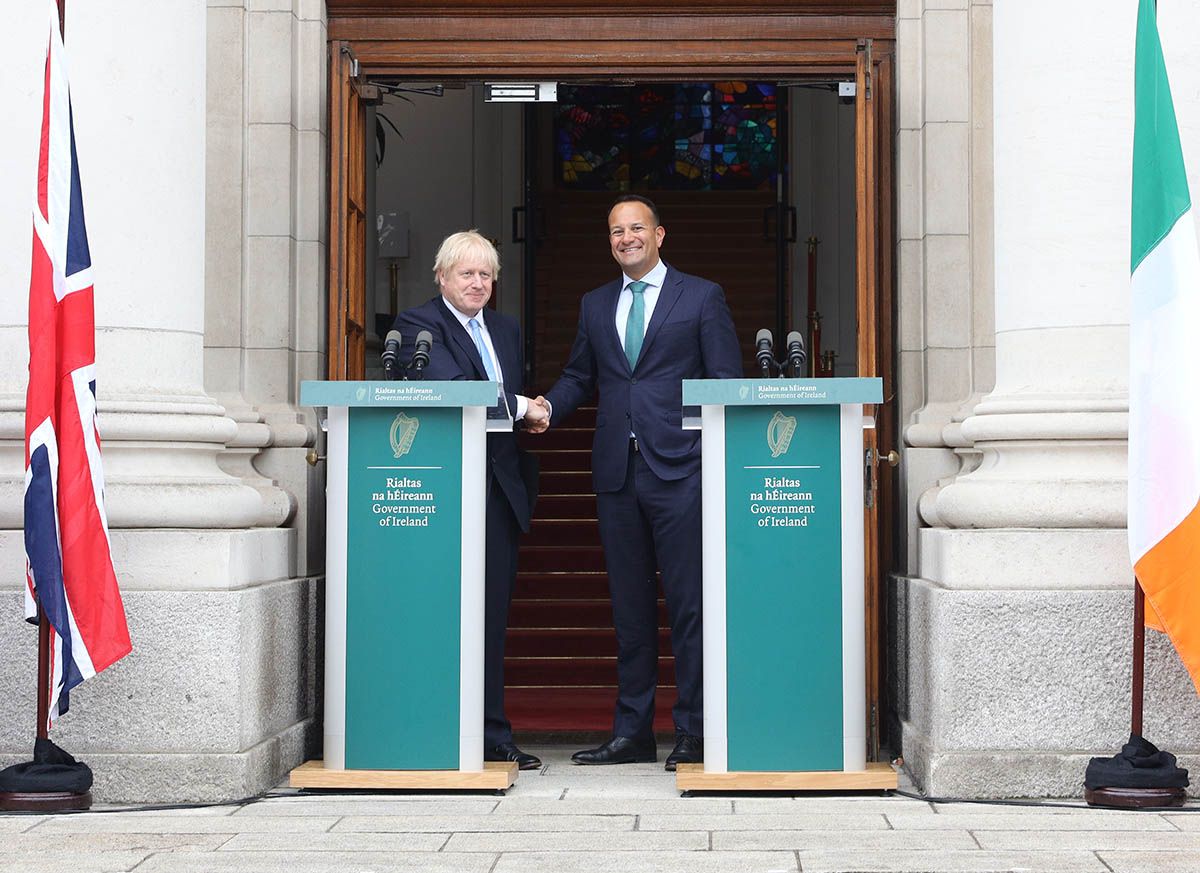 - Sterling to remain under pressure if Brexit deadline extended

Supportive news for Sterling exchange rates came out late in the London trading session after the leaders of the UK and Ireland confirmed progress had been made in a much-anticipated meeting aimed to break the current deadlock holding back Brexit negotiations.

Sterling was seen trading with a constructive tone after a press statement confirmed Prime Minister Boris Johnson and Taoiseach Leo Varadkar had a "detailed and constructive discussion."

Furthermore, "they agreed that they could see a pathway to a possible deal."

"Once again, as the door for further discussions seemed to be closing, the glimmer of hope shone a little brighter. Seemingly last ditch talks between Irish Taoiseach Varadkhar and UK PM Johnson may have rekindled potential for compromise," says Tim Riddell, Financial Markets Strategist at Westpac in London.

In a sign of emergent momentum, it has been confirmed that the UK's Brexit Secretary, Stephen Barclay, and UK officials would travel to Brussels on Friday to engage with their European counterparts.

The meeting had been initially cancelled following a fractious first half of the week for EU and UK that saw talks almost breakdown completely.

"Varadkhar is now set to meet EU’s chief Brexit negotiator Barnier and other key EU stakeholders on Friday and UK’s Brexit Secretary will also meet with Barnier and his negotiating team. Whether there is time to create the foundations for any form of agreement into next week’s EU Leader’s Summit so that it can be debated at UK Parliament’s special sitting on 19th is still a distant hope," says Riddell.

"I had a very good meeting today with the prime minister... very positive and very promising"

Ireland's Leo Varadkar says he "sees a pathway" to a Brexit deal in the coming weeks, after talks with UK PM Boris Johnsonhttps://t.co/tx4LrPGUrD pic.twitter.com/OBGwdD17gZ

The Pound's advance was further oiled by comments made by Varadkar to the press following the meeting that he believes a withdrawal agreement is "possible" by end of October.

"It it is possible to come to an agreement to have a treaty agreed to allow the UK to leave the EU in an orderly fashion and to have that done by the end of October," the Taoiseach said.

We maintain that if both sides are still talking by the time the October 17 European Council summit commences, then the chances of a deal are materially lifted.

We would expect to see a decent move higher in Sterling under such a scenario.

Sky News meanwhile report that Varadkar and Johnson discussed something that represents an almost complete overhaul of the current Withdrawal Agreement, such that the basics of a free trade deal should be established before other agreements on the Irish border are entered into.

Such an outcome would represent something of a victory for the UK side who have for some time realised that they made a mistake by agreeing to the EU's demands that an exit agreement be sealed before trade talks could begin.

"The Pound Sterling has been dominated for months by concerns that the UK may leave the EU without an agreement. However, such a scenario is becoming increasingly unlikely. Glimmers of hope are currently driving the currency," says Marc-André Fongern, analyst with with MAF Global Forex. 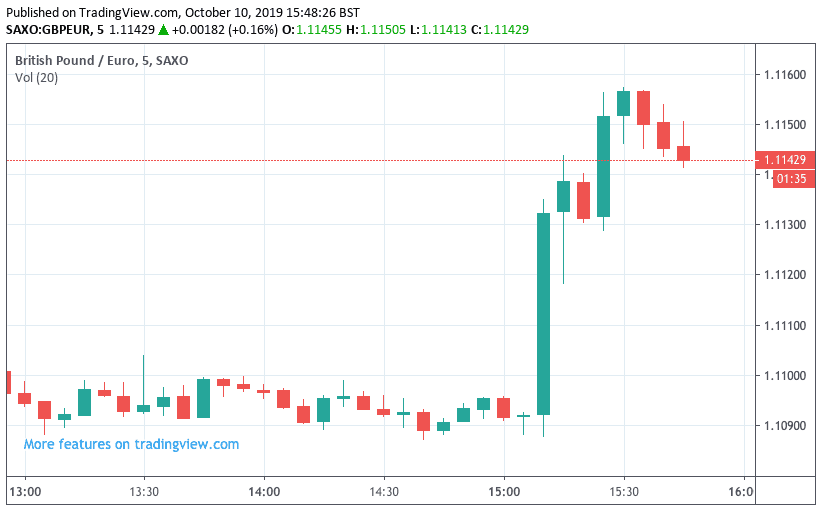 Above: Sterling-Euro gets a lift as market sense some renewed impetus in Brexit negotiations following a meeting of Varadkar and Johnson.

Despite a sliver of hope emerging for a EU-UK Brexit deal being struck next week, most commentators agree there remains a considerable distance to be navigated before a deal can be done.

And that is before any agreement lands back in the UK and is put before a deeply divided and tribal Parliament.

It is therefore little wonder that the popular assumption amongst currency market specialists is that a deal won't be struck, and instead a delay will be called.

However, there is very little belief that a rally in Sterling will transpire under such an extension as was the case back in March when Prime Minister Theresa Delay secured a delay. "At best No Deal Brexit risks have only been pushed out rather than diminished," says Derek Halpenny, a foreign exchange analyst with MUFG in London.

"The majority of market participants, including those that had so far expected a deal, now bank on a further postponement of the Brexit date," says Thu Lan Nguyen, an analyst with Commerzbank in Frankfurt. "A residual risk for a disorderly Brexit and thus considerable downside risks for Sterling remain." 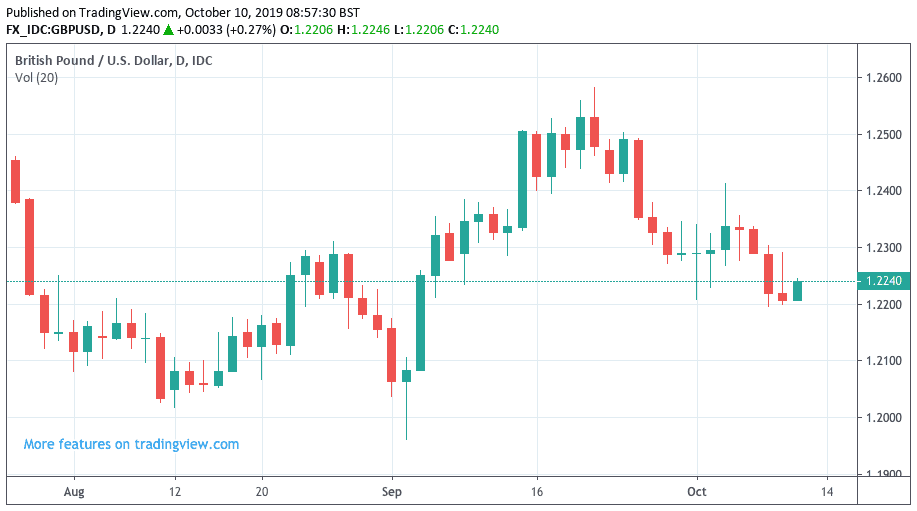 Above: Sterling-Dollar is in the middle of a range as markets await decisive Brexit developments

There is a sense that any delay will be used to conduct a snap General Election, with the outcome likely to deliver a more certain Brexit outcome under a Conservative majority or a potential second EU referendum under any other combination of outcomes.

David Sassoli, the president of the European Parliament, on Wednesday said of any EU decision to grant another delay, "I had a fruitful discussion with Speaker Bercow in which I set out my view that any request for an extension should allow the British people to give its views in a referendum or an election."

"If there are new elections or a new referendum, if there is a political shift leading us to believe we could have a different dialogue from the one we have today, then an extension can be discussed," said Amélie de Montchalin, France's Europe Minister.

A memo given to The Spectator late Monday by a Downing Street source showed the UK believes Ireland is not willing to make concessions to the UK based on a view that denying a Brexit deal ensures a second referendum becomes more likely via the calling of a snap election.

Foreign exchange markets have understandably been hesitant to punish Sterling too aggressively on signs that Brexit talks are close to breaking down as a likely delay means a Brexit-defining General Election awaits.

However, readers should be wary of a potential 'wild card' being dealt by the Government should it seek to deliver a Brexit at 'any costs' by October 31 in the event of the EU refusing to agree to a new deal.

“If this deal dies in the next few days, then it won’t be revived... We will also make clear that this government will not negotiate further so any delay would be totally pointless," the Monday memo released by the Number 10 source said, widely believed to be Prime Minister Boris Johnson's senior aid Dominic Cummings.

There is however no clear route available to Johnson to deliver a 'no deal' Brexit on October 31, and this is perhaps what would make such an outcome a surprising one that might have extremely significant consequences for foreign exchange markets.

Forecasts from Dutch-based lender Rabobank show the Pound could fall to record lows and ultimately equal the Euro in value on such an outcome.

While analysts and the market do not expect a 'no deal' as a base-case outcome, expect this a residual fear of such an outcome to keep Sterling under pressure over coming days and weeks.

"Although it appears that the Benn Act, which requires the government to seek an extension to Article 50 if there is no deal reached at the EU summit, appears watertight and unlikely to be circumvented by government there will likely remain some (however minor) concerns that a 'no deal' Brexit could still happen by the end of the month. This coupled with the fact that at best No Deal Brexit risks have only been pushed out rather than diminished will weigh on the Pound during the remainder of the month," says MUFG's Halpenny.