- But markets could be too complacent of a Brexit deal

- UK said have a plan, just not willing to share documents with the EU

Pound Sterling has over recent weeks recovered over half of the losses it suffered against the Euro during the May-August period, putting the GBP/EUR exchange rate slap-bang back into the middle of its two-year range at 1.1284.

However, we are told by one the City of London's most prominent foreign exchange analysts that the bias of risks facing Sterling remain lower, and that the currency's recovery has now "run out steam."

Kit Juckes, a foreign exchange strategist with Société Générale says "EUR/GBP is now trading almost exactly at its 2-year average level, in the middle of the range covered by peak optimism when Mrs May ruled out no-deal, and peak gloom when Mr Johnson convinced the markets that he was serious about leaving, with or without a deal, on October 31."

Back on May 06 the GBP/EUR exchange rate peaked at 1.1779, before markets rapidly began to shed exposure to the currency after it became clear Theresa May's Brexit deal would not pass through the House of Commons, and therefore her position had become untenable. 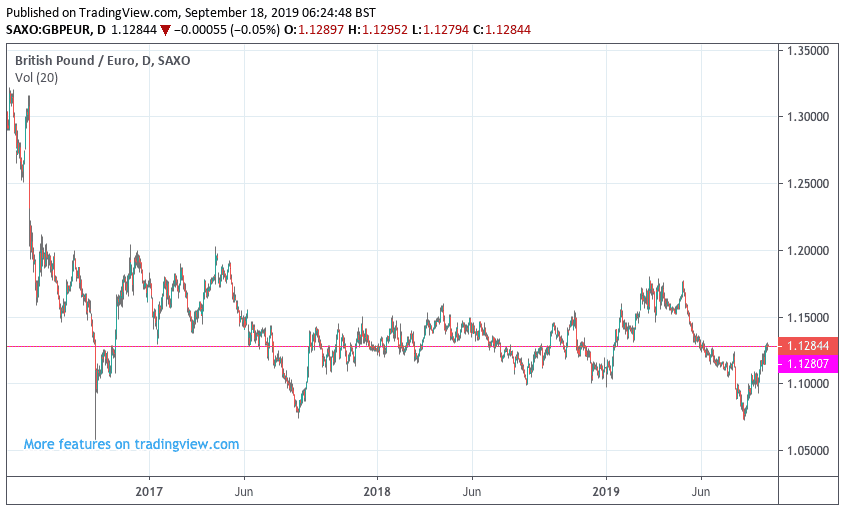 Above: GBP/EUR is back in a long-term multi-year range

Sterling fell following May's resignation which sparked a leadership contest that saw Boris Johnson, a hawk on Brexit, ultimately succeed as her replacement.

Johnson's willingness to pursue a 'no deal' Brexit if no new Brexit deal could be achieved lead markets to push the GBP/EUR exchange rate down to a two-year low at 1.0724.

But, "Sterling has recovered over half of the 10% it lost in May-August," says Juckes. "Parliament appears to have tied his hands on that score but with every public utterance, the PM restates his commitment to leave one way or the other, at the end of October."

This has Juckes concerned Sterling's recent recovery is at risk of fading.

"His sojourn in Luxembourg did not suggest that he is making much progress in getting a deal and Sterling has run out of steam," says the strategist.

"We note the recent improvement in hopes for a deal, which has propelled GBP higher. We remain skeptical that deal can be reached never mind legislated in Parliament ahead of the 31 October deadline. We therefore remain cautious on Sterling heading into October ahead of the Conservative Party conference and the resumption of Parliament on 14 October," says Kamal Sharma, a foreign exchange strategist with Bank of America Merrill Lynch.

But for now, markets appear willing to give Sterling the benefit of doubt and are coy to enter fresh bets against the currency and risk being caught wrong-footed in the event that a deal is struck in October.

Yesterday it was reported that Johnson intends to reveal fresh ideas on the Northern Irish border - which would be key to unlocking a revised deal - to EU leaders when they meet at the UN General Assembly next week.

Furthermore, reports suggests the UK has put forward new proposals on unlocking a new Brexit deal, but has withheld written details "due to fears the proposals will be leaked," reports Sky News, citing the Press Association.

Numerous EU sources have thus far said the UK has not yet put any new concrete proposals forward, and this has kept foreign exchange analysts wary of Sterling. The message that the UK was not offering anything new was rammed home by the now infamous press conference held by Luxembourg Prime Minister Xavier Bettel in which he signalled the UK's negotiating position remained rudderless under Johnson.

This line has been readily accepted by many in the analyst community.

"GBP/USD did decline following UK PM Johnson’s disasterous meeting with Luxembourg PM Bettel. Johnson refused to show up at the press conference after the meeting because of protesters. Bettel called Brexit “a nightmare,” which it is," says Marshall Gittler, an analyst at ACLS Global. "Meanwhile, speaking to reporters at the British ambassador’s residence, Johnson said, 'Yes there is a good chance of a deal. Yes, I can see the shape of it.' Really? Then why don’t you tell us what that shape is?"

But it could be risky to take the words of EU leaders at face value as UK negotiators appear to be keeping their cards close to their chests at this point in neogitations.

"Once you share it with 27 countries, you’re not in control of the document," a Government source told The Telegraph. "We showed them the text of the Northern Ireland protocol, without the backstop in it, to show them the precision of removal that we’re looking for.” Proposals the UK has discussed concerned areas such as agri-food, the source added."

We feel the negotiations could run right up until the October 17 European Council meeting where a deal could finally be agreed, which would in turn unlock a sustainable recovery in the Pound.

Therefore those that believe the UK simply has no plan to deliver on a Brexit deal might be wrong-footed.

Trade Negotiations: No Deal Yet, but Pound Sterling is Chipper ahead of the Weekend