Pound Sterling's recovery rally against the Euro is still alive, with the GBP/EUR exchange rate on Tuesday a few cents off the three-month highs reached on Monday at 1.1301 amidst ongoing signs of Brexit progress with reports out that Prime Minister Boris Johnson will unveil a new proposal designed to unlock a new Brexit deal at the UN next week.

Tuesday morning sees the pair at 1.1275 on the inter-bank market, with trend momentum remaining positive suggesting further gains can be carved out.

The Relative Strength Index - an indicator used by technical analysts to measure momentum - reads at 64, which is a positive reading that advocates for further gains. A reading of 70 and above would indicate an exchange rate is overbought and that the trend was at risk of cooling. 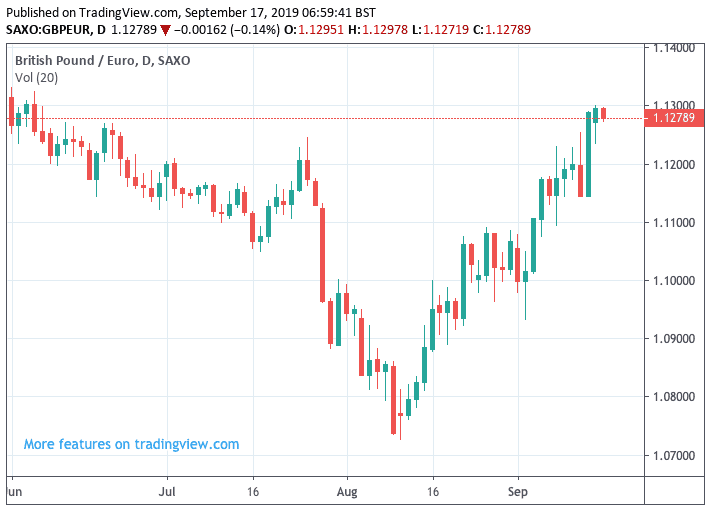 Technical analyst Axel Rudolph at Commerzbank however warns the GBP/EUR exchange rate's uptrend might stabilise at a key resistance area on the charts.

However, should the level break then we would expect confidence in the ongoing recovery to grow.

While technical studies suggest further gains are possible over coming days, news that Prime Minister Boris Johnson is set to unveil new plans designed to solve the Northern Ireland border question will provide a supportive fundamental backdrop to the currency.

Markets have been reducing negative bets against the Pound since mid-August on a growing belief that an October 31 'no deal' Brexit would be avoided.

While the UK Parliament has legislated against such an outcome, signs that a Brexit deal can yet be clinched have provided further impetus to Sterling's recovery, with analysts saying that such an outcome could spark a sustained and meaningful rally in the currency.

The Times on Tuesday reports Johnson will unveil the outline of an Irish border backstop alternative when he attends the United Nations General Assembly next week, which if accepted by the EU could finally lead to a Brexit deal being ratified by the UK's divided Parliament.

It is reported Johnson will speak to Donald Tusk, the President of the European Council, as well as French, German and other EU leaders on the sidelines of the UN General Assembly in New York.

"The Pound is continuing its recovery against the euro, following reports that Prime Minister Boris Johnson will reveal an alternative solution to the Irish border issue at the UN next week. GBP/EUR reached a three-month high yesterday in reaction of ongoing progress."

It was telling that Juncker used the term "negotiations" to describe the recent meetings between the UK and EU: recall the EU have maintained a line that negotiations between the two sides could not be reopened.

In a further sign of progress, both the EU and UK agreed to daily contact on the issue.

Following the meeting Juncker said, "negotiations will continue at high speed", while Johnson said that he was "cautiously optimistic" that a new deal might be reached, but "clearly it’s going to take some work".

At the heart of current negotiations are the unpicking of the Irish border backstop - the so-called insurance policy that would be triggered were the EU and UK to fail to agree a future trade deal that ensured no 'hard' border in the trade of goods would need to be erected on the island of Ireland.

The UK insists that the entire mechanism can be discarded for measures that successfully monitor the flow of goods between Ireland and Northern Ireland, but not at the border.

It is believed Johnson will propose an all-Ireland food zone, that would go someway in achieving this aim.

Recent suggestions that Northern Ireland's DUP party - close allies of the Prime Minister's Conservative Party in Westminster - might agree to such an outcome have lead to increased speculation that the UK might have a workable plan.

Sir Jeffrey Donaldson, the DUP’s chief whip in Parliament said that there could be "practical solutions" to avoiding a hard border, and these could include some checks on goods and produce passing from Britain to Northern Ireland. The notion that there would be any checks within the UK market has thus far been resisted by the DUP, the latest concessions suggest movement towards a solution.

"We want to avoid a hard border on the island so we are looking at ways in which we can find practical solutions that address this, in particular in areas like agri-food,” Donaldson said in an interview with Irish broadcaster RTÉ. "The prime minister is meeting with Mr Juncker to discuss these. We’ve had an input and will continue to have an input to the formulation of the proposals of the UK government which I believe are gathering apace, so I believe it is possible to find practical solutions to the concerns that not only we have but that the Irish government have as well."