- Currency could sink to below parity on no-deal

The Euro-to-Pound exchange rate is forming a textbook bullish price pattern, according to Walter Zimmerman, an analyst at ICAP Technical Analysis in New York, which could see the pair break above parity in the months to come.

“Where is your sell-off? You have this stunted, abbreviated, puny, lame excuse for a retreat which suggests all this has been a bull market correction,” says Zimmerman of the Euro's recent correction lower since the August 2017 high  was reached 2-years ago.

This suggests the bull market run higher by the Euro against the Pound will resume with signs the pair could push onto, and even break, parity. 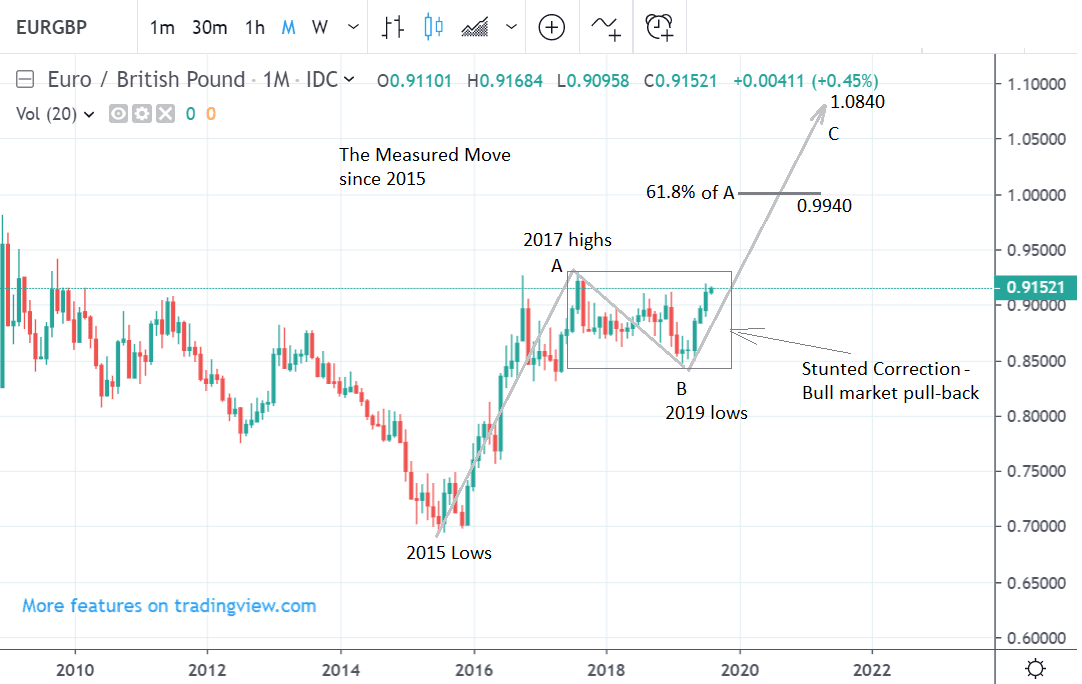 The Pound and Euro have never equalled each other on the interbank market, and the current all-time high for EUR/GBP is at 0.9714, reached in December 2008 in the wake of the great financial crisis. This equates to a Pound-to-Euro exchange rate of 1.0294.

The Euro surged against Sterling in the aftermath of the EU referendum in 2016, but charts show that the move higher actually started in 2015 when markets started to sniff potential danger in the coming year.

The whole move up in EUR/GBP since the 2015 lows could actually still be underway with an incomplete price pattern called a ‘measured move’.

Measured moves are 3 wave zig-zag shaped patterns in which the first and third waves (usually labeled A and C) are either of the same length or 61.8% of each other - other variations are also possible such as 161.8% but rare.

The targets are useful guides to where Sterling could go in the event of a 'no deal' and chaotic Brexit triggering a fall in the value of Sterling.

“This chart speaks a little bit ‘truth to power’. Power being certain politicians saying that a no-deal Brexit will be fine, we’ll get through it. But the chart suggests ‘no’ (a no-deal Brexit is going to be a total mess),” says Zimmerman. 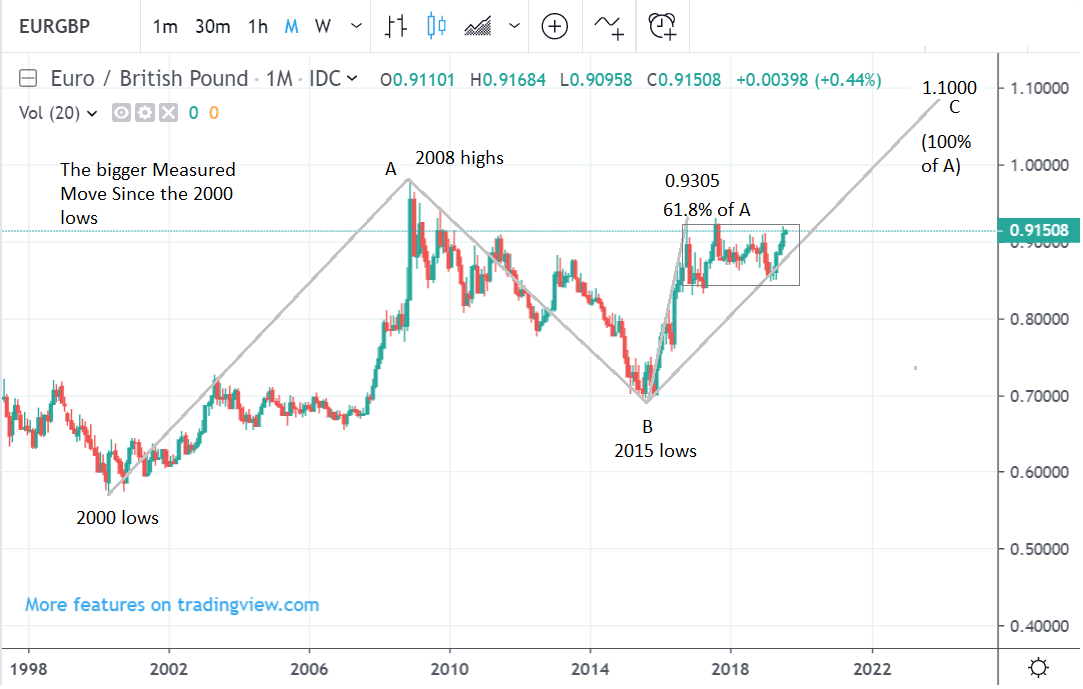 There are even graver technical risks the pair could be part of a measured move going back even further to the 2000 lows. This larger pattern could see its C wave end just shy of 1.1000 (0.9090 GBP/EUR) based on a 100% extrapolation of A.

“That’s not bullish (for the Pound),” says Zimmerman.

Evidence from options markets appears to increasingly corroborate a perception by investors of an increased risk of a steep decline in the Pound from a no-deal Brexit.

Options are derivatives used to hedge against risky events such as the Brexit deadline on October 31. The cost of options rises as demand increases around risky events.

It is not surprising to see a rise in the cost of options which expire 3-months out at around the time of the deadline, therefore.

The shape of the option price curve is similar to when the UK had its original Brexit referendum in 2016, says Dani Burger, an analyst on Bloomberg New. And this is ringing alarm bells, as it suggests traders see a similar risk of a ‘no-deal’ as they saw of ‘leave’ winning the referendum back in ‘16, which is what happened.

“The term premium tells us how options are pricing the Pound at different times. You’ll notice that at 3-months this line jumps up. That’s investors wanting more protection 3-months out, which is that Brexit deadline. The line I have at the top of the chart is actually the same time period before the Brexit referendum, showing us that the Pound is pricing in the same risk that it was back in 2016,” says Burger.