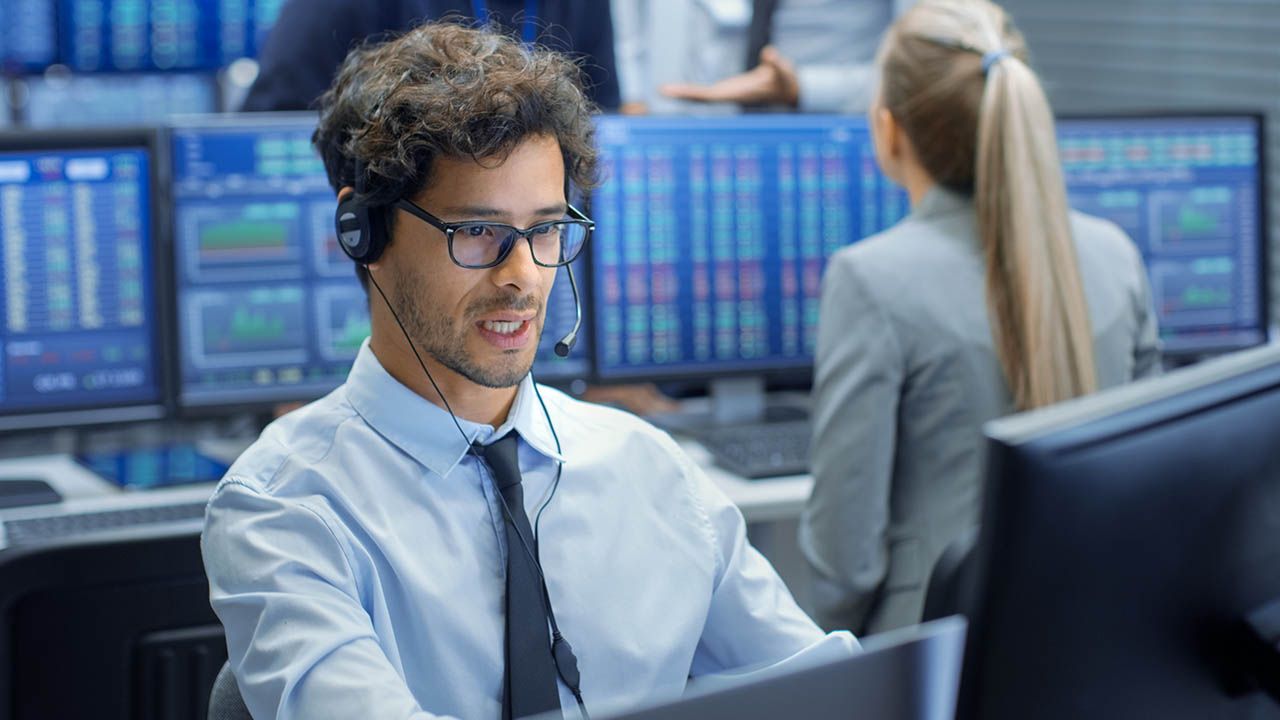 - May have breached mini-range floor on intraday basis

- GBP downside driven by rise in 'no deal' Brexit odds

The Pound-to-Euro rate has broken below a key floor at the March 21 lows at 1.1466, signalling the possible onset of a much more bearish environment for the pair.

The Pound has now suffered eight consecutive days of losses against the Euro in what amounts to one of the worst losing streaks in years.

At the time of writing the exchange rate is quoted at 1.1458, its lowest level in three months.

The pair broke below the 1.1466 March lows on Wednesday after a combination of increased 'no deal' Brexit odds and a relief rally by the Euro on easing auto tariff concerns. 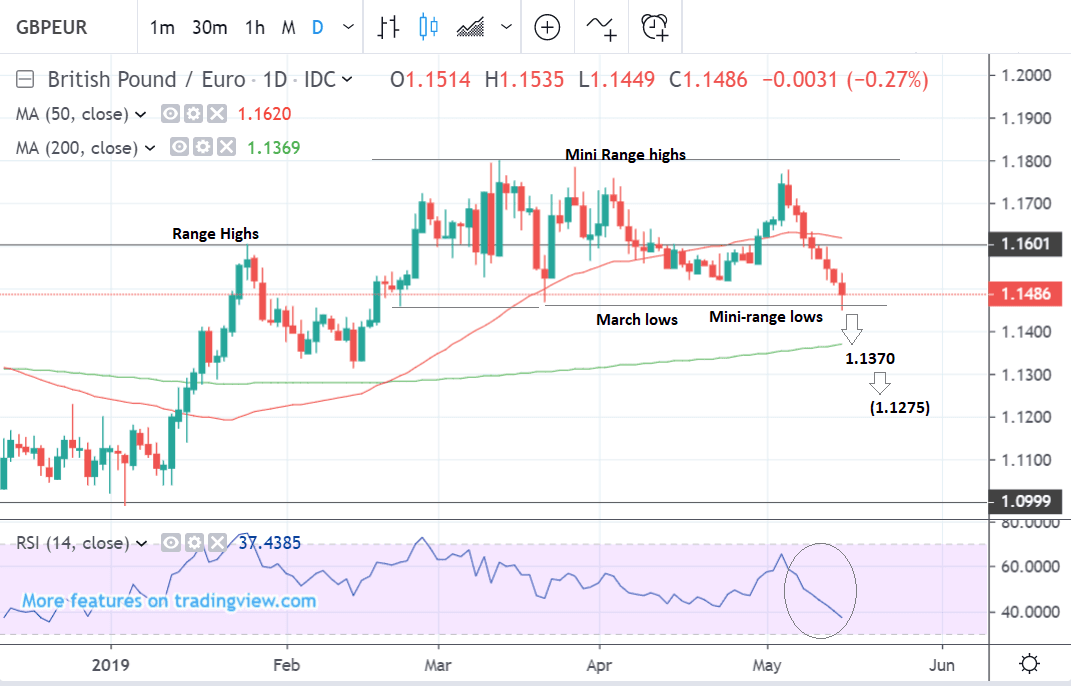 We wrote yesterday that the exchange rate had entered a key technical area: where it would find support and the losses would be arrested, or where a breakdown would open the door to further, relatively fast-paced declines.

We had been looking for the Pound to find buying interest in the 1.1459-1.1501 area, but the selling pressures remain so intense that it is hard to see the area holding.

There is still of course a chance buyers could step in as we are still in the bottom of the range, but it is certainly 'high noon' for Sterling bulls.

Aila Mihr, Senior Analyst with Danske Bank says the Pound-Euro rate has now fallen out of their expected range, the bottom of which is at 1.1494.

"This has come about as in the past weeks, markets have shifted increasingly to price a "no outcome" in the UK cross-party talks. May has announced there will be another vote on 3 June (and is exploring options to change the deal with the EU), but that as usually looks optimistic at best," says Mihr.

Concerning the outlook Danske Bank are however not giving up on their expectation for the range boundaries to ultimately hold: "we do not expect the GBP to trade materially weaker than this," says Mihr.

Our latest analysis suggests a break below Wednesday’s 1.1449 low would probably result in a confirmed breakdown and result in a stronger bearish decline and an extension lower to an initial target at the 200-day moving average (MA) at 1.1370.

The breakdown suggests a possible breakout of a mini-range which had formed this spring between the March highs at 1.1802 and the aforesaid March lows at 1.1466. If it is a breakout of that range, then it will probably move at least 61.8% of the height of the range lower, which indicates a down move with an eventual target at about 1.1275.

The RSI momentum indicator (circled) is corroborating the decline as it too has fallen in line with the exchange rate, in fact, it seems to have fallen more steeply and to a lower relative level, suggesting downside momentum is extra strong. 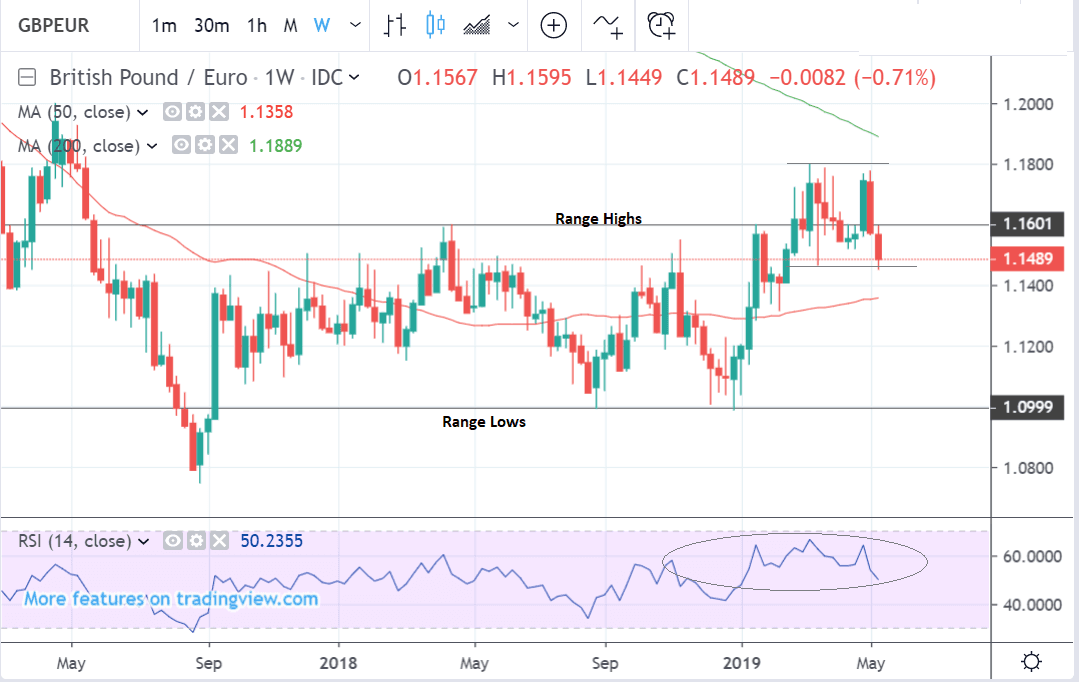 The bigger picture weekly chart shows the pair has now convincingly broken back inside a long-term range which began forming in 2017.

The break below 1.1601 range highs was a key bearish development and now means the pair is back inside this longterm range.

The RSI momentum indicator on the weekly chart is also quite bearish as it shows the formation of a compelling topping pattern similar to a head and shoulders (H&S) top reversal pattern seen on price charts. This adds a bearish timbre to the outlook.

Downside for the pair was driven by a continued impasse in Brexit talks between the UK’s major political parties aimed at trying to arrive at a compromise which could win the backing of a majority in the House of Commons.

The fear is that with no compromise in sight the risks increase that the UK will leave the EU without a deal on October 31. The possibility of such an outcome was enhanced by reports on Wednesday that two senior government ministers - Liam Fox and Stephen Barclay - had said that the UK would be leaving in October either with or without a deal.

The move lower may also have been driven in part by a strengthening Euro on reports that the U.S. would delay its decision whether or not to impose tariffs on EU cars.

The original deadline for a decision had been May 18 and the uncertainty caused had been undermining the Euro, however, the news it would be delayed by 6-months, helped take some of the risk premia off of the Euro, which rallied as a result. 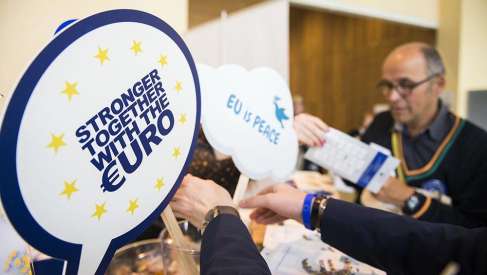