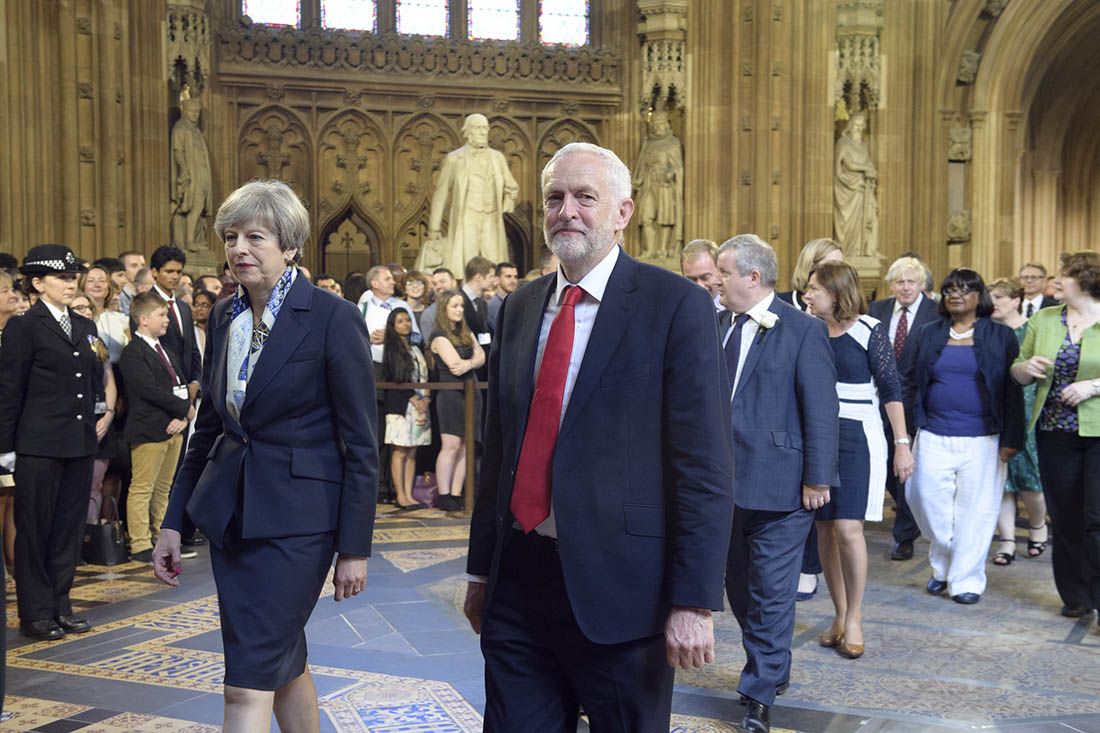 - Prospect of 'no deal' in October has jumped today

- June to see another Brexit deal vote in parliament

The British Pound has slumped to a fresh three-month low against the U.S. Dollar and a one-month low against the Euro in mid-week trade  as markets continue to discount the prospect of a Sterling-supportive cross-party Brexit deal being struck by Labour and the Conservatives, while fears of the removal of Prime Minister Theresa May and a general election remain non-negligible risks that are growing.

A 'no deal' Brexit came roaring back into play after two senior Government ministers let it be known that without a Brexit deal being voted through the House of Commons it would almost certainly see the UK leaving the EU without a deal on October 31.

The Government announced overnight that a fourth attempt at getting a Brexit deal through parliament will take place in June; and beyond that there are only two options: revoke Brexit or leave without a deal.

The move appears to have sharpened minds to the growing risks ahead, and traders have shed exposure to Sterling as a result.

"Two UK government ministers on Wednesday highlighted two options if MPs reject Theresa May's proposed Brexit agreement for a fourth time. One option would be very good for GBP; the other would be very bad. The very good option for sterling would be for Britain to revoke Article 50 and remain in the European Union. The very bad option would be for Britain to leave the EU with no deal," says Robert Howard, an options analyst at Thomson Reuters.

Barclay told MPs in the House of Commons that the Brexit deal was "dead" if it is not voted through on the fourth attempt.

If current cross-party talks fail - as they look certain to - and with the Conservative party ultimately still committed to delivering Brexit, it does appear that a 'no deal' would be chosen ahead of a revocation of Article 50.

The pressure applied by Barclay and Fox appears aimed at pressuring Conservative and Labour MPs into backing a cross-party deal, but it has clearly spooked markets. Until now, markets have assumed the Government would pursue a range of measures to avoid a 'no deal', but what is dawning is that the road for further options has run out.

“Sterling has fallen to a 1-month low this afternoon as a combination of a lack of Brexit progress and a deterioration in risk appetite make the Pound less attractive," says Michael Brown, Senior Analyst at Caxton FX. “With an absence of major economic releases for the remainder of the week, focus remains on political developments in Westminster, with the likely collapse of cross-party talks a potential catalyst for further downside moves.

Prime Minister Theresa May has challenged Jeremy Corbyn to make up his mind on whether to back a cross-party compromise deal, as she seeks to bring a Brexit deal back to the House of Commons for another vote in June.

May told Corbyn at a meeting on Tuesday night that the Government intends to bring forward legislation to ratify a revised Brexit deal on June 4 or June 5.

In talks lasting about an hour on Tuesday night, May said the government would propose a close customs arrangement with the EU and uphold workers’ rights and environmental protections, in order to get Labour to sign up to a deal.

Thus far Labour have been unwilling to back a cross-party deal, saying the Government has not offered enough concessions.

However, it appears that the Government is now willing to set a deadline and therefore the market could well enter a wait-and-see approach in the run-up to the vote.

We believe should Labour and the Government announce a deal before this cut-off, the Pound could rally.

However the real test for the currency would be the passing of the Brexit deal put before the House on June 4/5.

We suspect that the numbers are simply not there, with large elements of the Labour and Conservative parties resorting to entrenched positions on Brexit, even if their leaders are more conciliatory.

A majority of members of the European Research Group, a large eurosceptic faction in Britain’s ruling Conservative Party, have indicated today they will vote against the deal when it is brought back before parliament next month.

Owen Paterson, a former minister, said he was concerned that her deal would leave Britain following EU laws. He said the Democratic Unionist Party, which props up May's party, is concerned it will align Northern Ireland more closely with the EU than the rest of the United Kingdom.

"Sadly, we will vote against it again, as the DUP put out a statement, because it doesn't change the essential nature of the withdrawal agreement, which is unacceptable we will have laws imposed on us by 27 different countries where we are not involved," Paterson told the BBC.

The prospect of a 'no deal' Brexit on October 31 therefore remains higher than the market is currently pricing we suspect.

"Investors have become comfortable this year with the notion that there is a blocking majority in parliament to prevent a no-deal Brexit. Investors we suspect would need to revisit this assumption and to re-price the probability of this negative tail for GBP should upcoming events push the Conservative Party in a more hawkish direction," says Paul Meggyesi, an analyst with JP Morgan.

While Sterling has come off its recent May highs, the currency remains relatively elevated on a medium-term, multi-week basis and is in fact the best-performing major currency of 2019.

Explaining Sterling's resilience is the market's apparent belief a soft Brexit is the most likely outcome.

"A no-deal Brexit continues to be a low-probability tail risk event while the chances of an orderly soft Brexit are high, in our view," says Hans Redeker, a foreign exchange analyst with Morgan Stanley.

As such, "current UK asset valuations look cheap, and we expect the factor underpinning this undervaluation to be removed with a soft Brexit resolution in 4Q19, which is likely to drive capital inflows into the UK and lift asset valuations," says Redeker.

While markets are optimistic it must be noted that the June vote will likely be the 'last throw of the dice' for the embattled May, and we see little chance of her being able to continue in her position if this attempt to pass the Brexit deal fails.

May has so far held back from introducing the Withdrawal Agreement Bill as she sought agreement from Labour that it would not vote it down.

A defeat for the Government "would almost certainly spell the end of Mrs May’s tenure since it would bring to an end the parliamentary session and she lacks the authority to start a new one," says Francis Elliott, Political Editor at The Times. "Her resignation is highly likely at this point, which would set in motion the election of a new Conservative leader and Prime Minister."

We believe markets will fret as the potential leadership candidates strike a hard tone on Brexit to win the vote of the Conservative party membership, promising to deliver an exit by October 31 whatever the costs.

This should unnerve markets and set the scene for some degree of depreciation in the Pound.