The ECB could jettison interest rate rises in 2019 in view of slowing economy. © European Central Bank, reproduced under CC licensing.

- Growth in Q3 was lower than forecast

- Euro at risk from fresh ECB easing via TLTROs

A run of weak data has put the single currency on the back foot and there are concerns for those watching Euro valuations that this trend might extend well into 2019; a time many are expecting the European Central Bank to respond to entrenched growth and rising inflation. 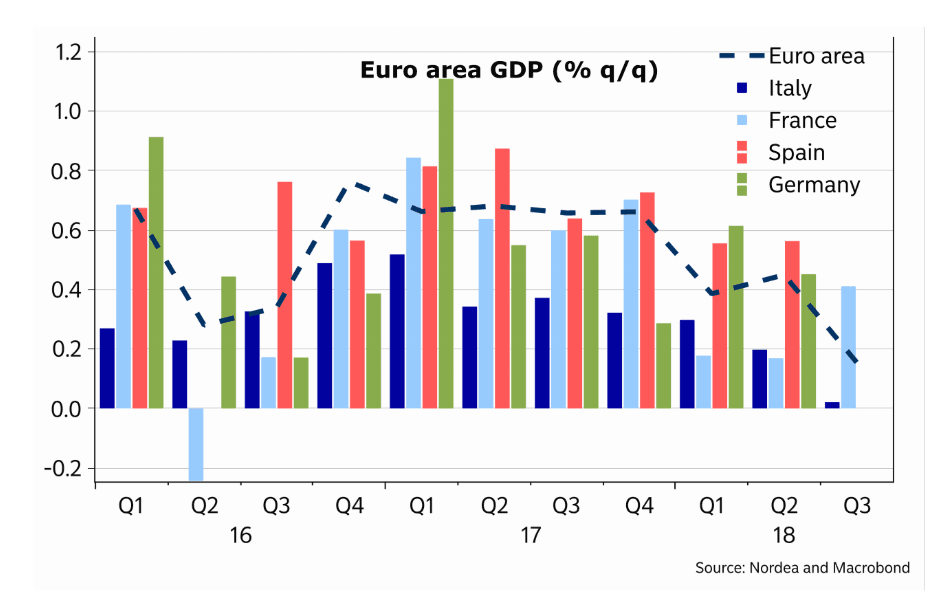 Euro-area PMIs have also fallen rapidly, with Manufacturing PMI now down from a peak of above 60 in December 2017 to 52 in October, and this could further weigh on the outlook for the Euro.

"The GDP numbers certainly make the ECB’s 2.0% growth forecast for the Euro-area for this year look too optimistic," says Jan Von Gerich, a strategist at Nordea Bank. "Quarterly GDP numbers can be quite volatile and a rebound in Q4 may be in the cards. That said, these numbers are not a one-off, but come on the heels of worrying falls in the PMI data." 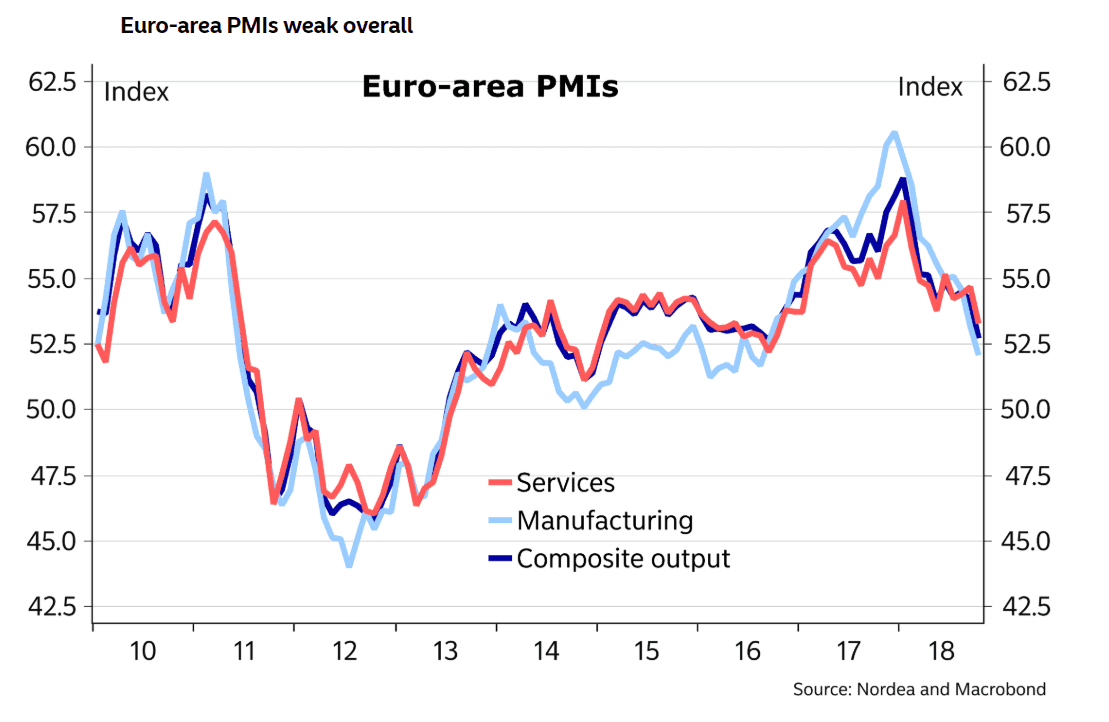 The trajectory of growth raises the previously unthinkable possibility that the ECB might veer off its 'autopilot' course for normalising monetary policy in 2019.

Last Friday, following a set of especially worrying bank stress test results, it was rumoured that the ECB was contemplating the relaunch of TLTROs (Targeted Long-Term Refinancing Operations), which are essentially cheap loans offered to Eurozone banks by the central bank, to shore up the Eurozone financial system.

They were first introduced in 2014 and 2016 when Draghi said he would do "whatever it takes" to save the Euro.

"ECB sources indicate Friday that they may consider implementing a fresh Targeted longer-term refinancing operation (TLTRO), according to MNI," say strategists at Citibank in a recent missive. "This would effectively launch another wave of cheap funding for banks as it ends its asset purchase program. This comes following results of the latest EU stress test on European banks and adds to the negative tone in Euro."

The TLTROs would cause a sudden increase in liquidity would have the effect of diluting the value of the Euro and represents an overarching risk to the outlook for the currency.

Of importance in this regard may be the release of final estimates of Eurozone core inflation for October, out on November 16. The flash estimate showed inflation bouncing back to 1.1% from the previous low 0.9%, but it's not until the final estimate that we will know whether these gains have been held onto or not, and this could represent a 'make-or-break' moment for the Euro.

It is also quite possible that the current bout of low inflation is only temporary, and that the market is over exaggerating the risks to the downside.

The ECB, after all, has stubbornly stuck to its message that growth and inflation will rise towards its target level over the medium-term despite the recent slowdown and run of bad data.

In his testimony to the European Parliament at the end of September, for example, the president of the ECB Mario Draghi talked about "a relatively vigorous pickup in underlying inflation" in the Euro area.

Inflation Could be a Saving Grace

Although cynics suggested he was catering his message to his audience some economists are also of the opinion that underlying inflation is actually experiencing a fairly strong recovery, principally on the back of higher wages.

"Something has changed – wage growth in the Euro area has picked up significantly," says Kjetil Olsen, chief economist Norway, at Nordea Bank. "For many years, compensation per employee gradually edged down, with growth reaching a record low of 1.0 % y/y in 2016. In Q2 2018, compensation per employee showed growth of 2.3 % y/y, the highest since 2009, and the trend is pointing sharply upwards."

Olsen is of the view that wages are about to start rising in the Eurozone and this will lead to higher inflation.

"Inflationary pressures are not imminent, but gradually building. Labour shortages are increasingly apparent and suggest that pressure has started to build in the Euro area and especially in the countries that are furthest in the business cycle".

The Philips Curve theory which relates falling unemployment to wage inflation suggests a rise in wages of 2.5% would bring inflation back up to the ECB's 2.0% target, says Olsen, who argues that despite a weaker correlation during this cycle the Philips curve, is still valid.

The economist forecasts that wages will probably rise the magic 2.5% level by the middle of 2019. Which is about the same time as the ECB expects to start raising interest rates. The result will probably lead to a recovery in EUR/USD.

"The ECB waking up to higher inflation should lead to a similar trend in EUR rates and trigger a rising EUR/USD in 2019," concludes Olsen.