- UK seen economy on back foot in opening of final-quarter.

- After retail sales post a surprise 0.1% decline for October.

The UK economic outlook received another knock Thursday after Office for National Statistics (ONS) figures revealed a surprise fall in retail sales for last month, further imperilling an already-bearish consensus that suggests the UK will grow at its slowest pace since the financial crisis this year.

Retail sales volumes fell by 0.1% in October after the ONS counted declines in the quantity of goods bought across all cateogories, which is a blow for the economic outlook in the final quarter because it's volumes rather than sales values that matter in the calculation of GDP growth. Markets had been looking for a 0.2% increase to follow the nil-change 0% reading reported for September.

"Retail sales have lost momentum recently, with three-month-on-three-month growth in volumes slowing to just 0.2% in October, the lowest rate since April 2018, when bad weather disrupted spending. In October, the weakness was broad-based," says Samuel Tombs, chief UK economist at Pantheon Macroeconomics. "The overall weakness was surprising, given the strong improvement of the CBI, BRC and BDO measures of retail sales in October; for now, a recovery in the official measure in November looks like a good bet." 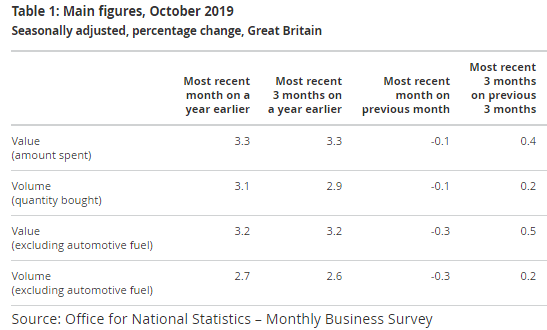 Above: Office for National Statistics estimates of retail sales values and volumes over selected intervals.

Markets and economists care about the retail figures because they reflect rising and falling demand in an economy where household spending accounts for a substantial portion of overall 'final demand'. The momentum behind the trend in that demand is important for the inflation outlook, which has implications for interest rates, exchange rates and all financial markets.

Thursday's figures confirm a poor start to a final quarter in which the economy was already going to have climb steeply uphill just to meet a downbeat consensus that's been projecting GDP growth of only a paltry 1.3% for 2019, its slowest since the aftermath of the financial crisis in 2010. The labour market, another key pillar of UK economic resilience since the Brexit vote, stoked further concern about the outlook earlier this week.

"[This] indicates that consumer spending growth could slow in Q4 from Q3’s 0.4% q/q," says Thomas Pugh at Capital Economics. "Consumers could just be holding off on purchases ahead of ‘Black Friday’ discounts in November, which are poorly captured in the ONS seasonal adjustment process. But at least some of last month’s weakness may reflect the recent weakness in the labour market." 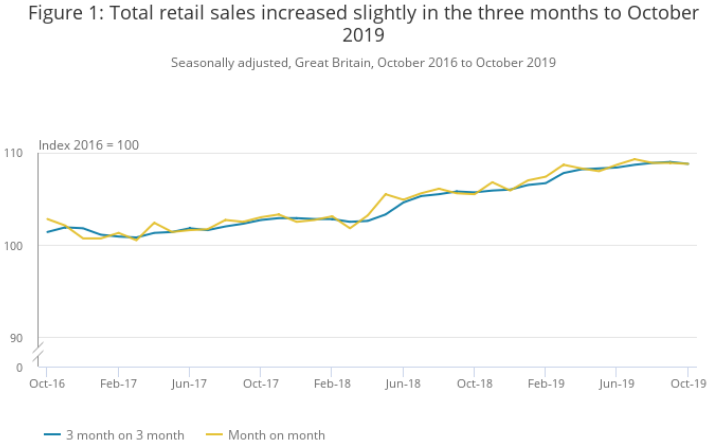 Above: Trend in Office for National Statistics estimates of UK retail sales.

Thursday's figures come after the ONS said employment growth slowed in October and that wage packets expanded at a lesser rate than before, while the number of unfilled vacancies retreated further from an earlier record high for ninth successive occasion. The figures covered the three months to the end of October and prompted unease among economists even though unemployment reversed its September increase by returning to a post-1974 low of 3.8%.

The UK economy has slowed further this year and the third-quarter rebound from a surprise contraction in the prior period was weaker than many economists expected, with political uncertainty over the Brexit pathway and future trade arrangements firmly in the frame for the slowdown. GDP growth was 0.3% in the third-quarter, more than reversing the 0.2% contraction seen in the previous period, although this was much weaker than the 0.6% first-quarter rebound from an earlier slowdown.

"With fewer people in employment and wage growth slowing, consumers may feel less flush. Overall, it is increasingly clear that the risks to our forecast for GDP growth of 0.2% q/q in Q4 appear on the downside," Pugh writes, in a note to clients following the release. 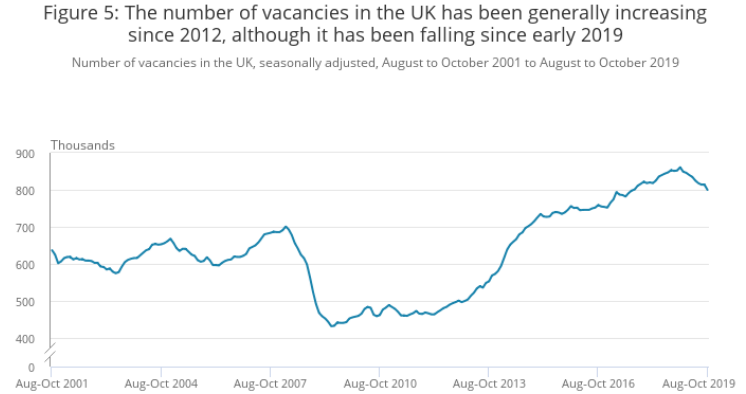 Above: Trend in Office for National Statistics estimates of job vacancy numbers in the UK.

UK economic growth has been widely tipped to fall to around 1.3% for 2019, down from 1.4% in 2018, but even that reduced forecast now appears to be too optimistic. Especially after the weak start to the final quarter. The UK economy is up just 0.7% for 2019, which means it needs to grow 0.6% in the final months of the year in order to achieve the consensus.

The economy has slowed after being squeezed on the domestic side by perennial Brexit-related uncertainty over future trade arrangements and economic policy while being pressured on the international side by a U.S.-China trade war that's crippled the global goods trade and bombed out the German and Eurozone economies. Germany grew by an annualised 0.5% last quarter, exactly half the rate of growth seen in the UK during the same period.

"The chart shows that consumers’ confidence is consistent with only a slight moderation in year-over-year growth in retail sales volumes to about 2% over the coming months," says Pantheon's Tombs. 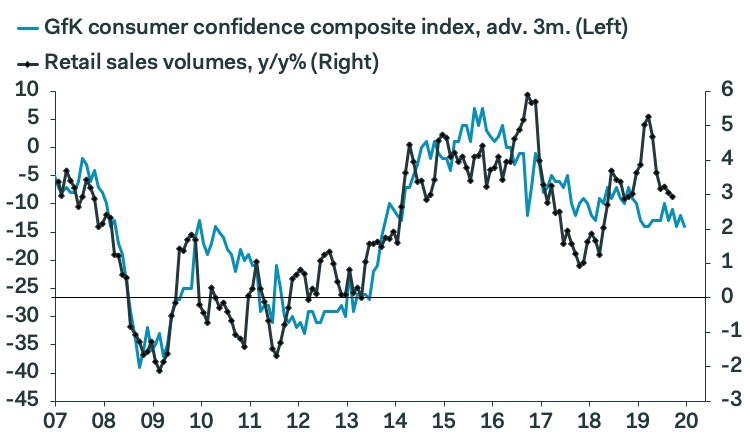 Markets are hopeful President Donald Trump will reach a 'phase one deal' to end the trade war with China while Prime Minister Boris Johnson's brexit proposal and a looming general election have all-but binned the threat of a 'no deal' Brexit in the near future. However, risks still abound on the domestic as well as international fronts and are clouding the Bank of England interest rate outlook. The bank seemed less sure last week of its oft-repeated belief that Bank Rate will need to rise in the years ahead.

October's 'phase one deal' to end the U.S.-China trade war no longer seems to be the sure thing it was billed as by President Donald Trump at the time and the UK is hurtling toward a December 12 general election that is tipped by pollsters to return a Conservative Party majority government, but which could yet produce either another hung parliament or an anti-Brexit coalition government.

"Tax and benefit changes next year likely will be positive, regardless of which party wins the upcoming election. Households’ saving rate should stabilise too, having risen over the last two years, if some clarity emerges on the Brexit front. Accordingly, we still think that households can be relied upon to keep GDP rising at close to its trend rate over the coming quarters," says Pantheon's Tombs.

A Conservative majority might offer some scope for the country to move beyond the paralysis wrought on it by a government that was unable to deliver on its manifesto commitments and by infighting as well as anti-Brexit maneuvering among MPs in parliament.

Another hung parliament would offer markets and the economy the prospect of five more years of the same old paralysis while an anti-Brexit coalition elevated to power by the first-past the post electoral system would see the Brexit saga and its resulting uncertainty threaten to roll on for more than another five years.

Capital Economics says the uncertainty thrown up by repeated delays to the UK's exit from the EU has damaged the economy and that further dithering on the path ahead will simply beget even slower growth. It forecasts a Bank of England interest rate cut to 0.5% in the second quarter of next year if the UK's EU exit is delayed any further.