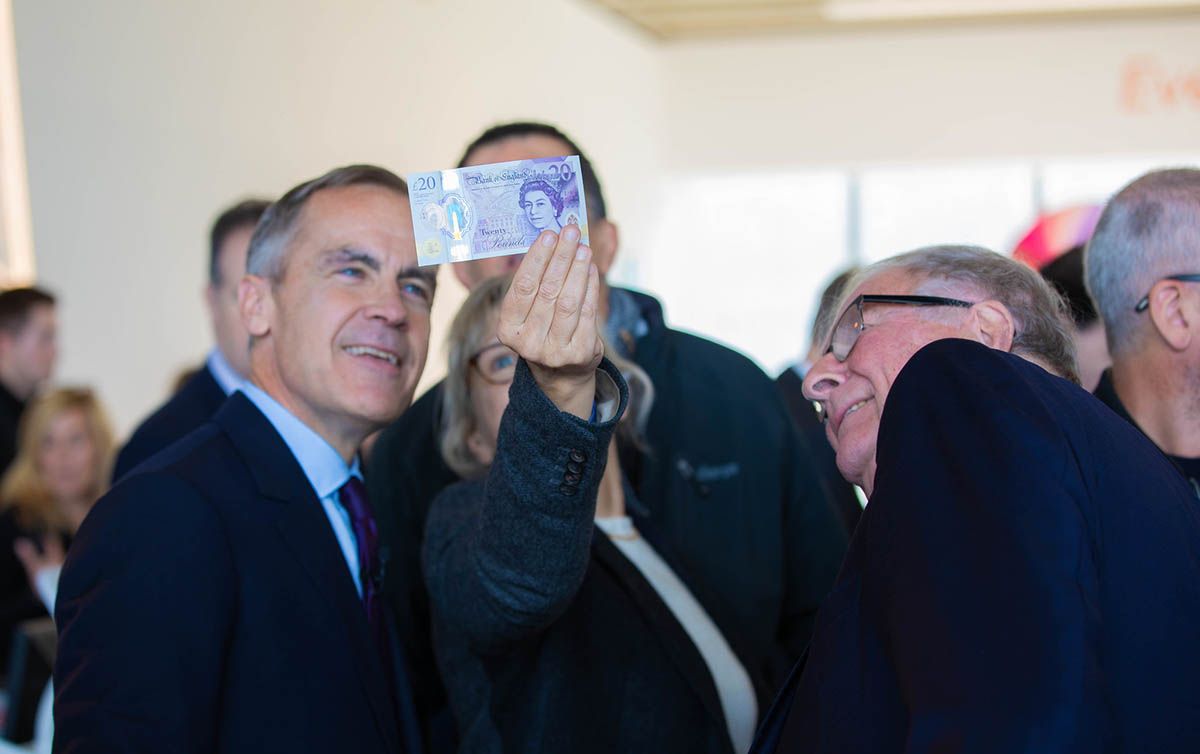 -  2 of 9 policymakers vote for BoE rate cut in November.

- But BoE statement still sees 2% inflation and rate hikes ahead.

The British Pound was put on the back foot on Thursday, November 07 after two members of the Bank of England's Monetary Policy Committee unexpectedly voted to cut interest rates at the Bank's November policy meeting.

The surprise votes suggest the Bank is leaning towards delivering an interest rate cut in the first half of 2020, unless a notable pick up in the UK's economic trajectory is reflected in the data.

The Pound fell on the news, as currencies tend to fall when their issuing central bank enters an interest rate cutting cycle.

"Sterling was shocked lower by a dovish Bank of England, which voted 7-2 to leave rates on hold. It was a bit of a surprise in that two members voted for an immediate cut – Saunders and Haskell both opting to cut now. This leaves the door open for a cut to come soon, signals the direction of travel and was the first split since the summer of 2018," says Neil Wilson, Chief Market Analyst at Markets.com.

Saunders and Haskel said their vote to cut interest rates was largely owed to their view that the UK's jobs market has begun to deteriorate somewhat - while the UK retains an ability to generate wages and employment is at all-time records, the number of vacancies in the economy has shrank dramatically of late.

The drop in vacancies suggests the jobs market could soon deteriorate and cutting interest rates would offer the economy some support under such conditions.

However, for the majority of MPC members, the economy continues to perform along a path that is consistent with keeping interest rates unchanged at 0.75%, at least for now.

"If global growth failed to stabilise or if Brexit uncertainties remained entrenched, monetary policy might need to reinforce the expected recovery in UK GDP growth and inflation," the MPC said in a statement.

But this in itself marks a departure from previous guidance at the Bank, where the expectation was that interest rates would rise in the future, particularly under an orderly Brexit scenario; now the talk is of rates having to be cut.

In short, the Bank has flipped into rate-cutting mode and this should offer some downside to Sterling, at least in the near-term. 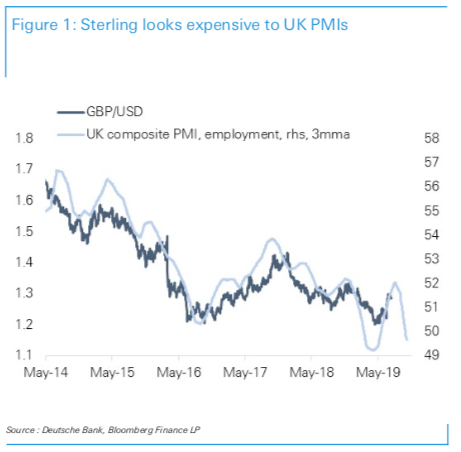 Above: UK PMI data has weakened of late, suggesting the Pound was vulnerable heading into today's Bank of England event. Image courtesy of Deutsche Bank

The Bank's MPC will have also noted that their commitment to raising rates in the future puts them out of step with their global peers, an outcome that might disadvantage the UK economy. The U.S. Federal Reserve has been cutting interest rates of late, the European Central Bank has restarted its money printing programme and the Bank of Japan this month signalled it was looking at cutting short-term rates.

"The Bank of England seems to have finally accepted that the world is in an easing cycle and it can’t fight this tide. We can safely say the hawkish bias has gone. Because we are at the start of an election campaign the Bank was never going to vote for a cut today. But had we not been, there could have been more members calling to ease. There is the age-old debate of whether it’s best to go for an insurance cut now to see off weaker growth etc, or to keep the powder dry for when/if it goes completely wrong," says Wilson.

"The message from the BoE is pointing to the downside for the Pound. Surprising votes for rate cuts voicing concern over domestic & global risks.Given how the UK is such an international economy, this is understandable," says Neil Jones, head of hedge fund FX sales at Mizuho.

Markets had been anticipating the BoE would not only leave rates unchanged but that it would do so unanimously, which might explain why Sterling tumbled when the decision was published.

Dissent on the MPC brings closer a majority that might be in favour of a rate cut, and markets are not prepared for that to happen any time soon.

The Bank of England also released their Monetary Policy Report today, which contains the Bank's forecasts for economic growth, inflation and other economic variables.

These in themselves can have an impact on the Pound as it suggests how the Bank sees the economy evolving over time.

"Looking through Brexit-related volatility, underlying UK GDP growth has slowed materially this year and a small margin of excess supply has opened up. That slowdown reflects weaker global growth, driven by trade protectionism, and the domestic impact of Brexit-related uncertainties," the report noted.

Compared to the earlier forecasts, the Bank has this month forecast end-2019 economic growth to be at 1.0%, up from 0.9% forecast in August.

These inflation forecast cuts are sizeable and will certainly in themselves present to markets a signal that the Bank is no longer looking to raise rates.

Indeed, these inflation expectations suggest the Bank could quite comfortably justify a rate cut over coming months.

The Bank's forecasts are however conditioned that a Brexit deal, of the kind struck between the UK and EU, is ultimately passed in coming months.

"Reflecting government policy, the MPC’s projections are now conditioned on the assumption that the UK moves to a deep free trade agreement with the EU," said the Bank in its MPR statement.

"For our economic base case, we expect Prime Minister Boris Johnson and the Conservative Party to win a majority of seats at the election. That should enable an orderly Brexit to happen on 31 January next year. In line with the MPC’s latest guidance, we look for the BoE to hike the Bank Rate in Q3 2020 followed by another hike in 2021, by 0.25bp each time. That would take the bank rate to 1.25% by end-2020. Of course, if the election ends in a hung parliament the BoE would change its tune fast and, could, as signalled in the updated guidance, even cut rates," says Kallum Pickering, an economist with Berenberg Bank in London.