The Pound to Canadian Dollar rate recovery has reached a roadblock in the form of technical resistance at the 1.7064 on the charts, which could remain an impediment to further gains this week unless Wednesday’s Bank of Canada (BoC) policy decision leads to a possibly unlikely upset for the Loonie.

Sterling entered the new week back beneath 1.70 against the Loonie after November’s jobs data provided further confirmation on Friday that Canada’s labour market has all but erased its coronavirus-inspired collapse from the pages of history.

November’s blockbuster jobs gain pushed the Canadian unemployment rate back to its lowest since the onset of the coronavirus crisis and pulled the USD/CAD rate lower from multi-month highs while turning GBP/CAD away from resistance at 1.7064 on the charts along the way.

Whether or not USD/CAD can hold below those multi-month highs before and after this Wednesday’s Bank of Canada policy decision will be an important determinant of if GBP/CAD makes what would then be its sixth attempt at recovering above 1.7064 over the coming days.

“USD overbought conditions remain a near-term impediment for further dollar gains toward 1.30 so it may see a consolidation period around current levels,” says Shaun Osborne, chief FX strategist at Scotiabank, referring to USD/CAD in a Friday note.

“The BoC’s decision on Wednesday (statement only) will likely provide little additional guidance regarding rates as it is too soon to gauge the impact of the omicron variant,” Osborne and colleagues also said. 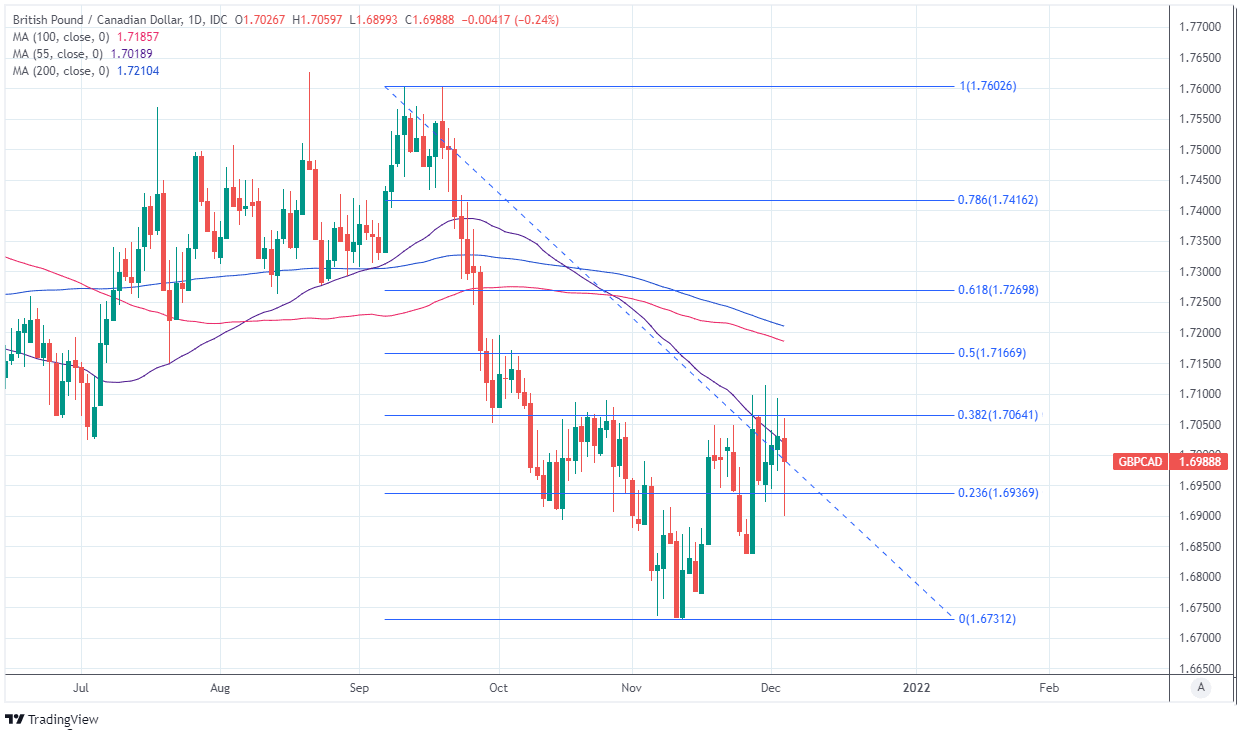 Any continued oscillation by USD/CAD between 1.28 and 1.29 could be likely to keep the Pound-Canadian Dollar rate suppressed beneath 1.70 this week, while any attempted breakout by USD/CAD toward new 2021 highs above 1.29 would be likely to serve as a catalyst for a fresh rally in GBP/CAD.

“While there’s notionally two sides to every argument, to us, the case for near-term removal of monetary stimulus is sound,” says Stefan Marion, chief economist at National Bank Financial Markets.

“Today’s vibrant labour market and record labour force participation for the prime aged workforce is simply inconsistent with a target policy rate at the effective lower bound of 0.25%,” Marion and colleagues wrote in a Friday briefing.

Wednesday’s BoC decision is the highlight of the week ahead for Canadian exchange rates and could pose a headwind for both USD/CAD and GBP/CAD ahead of the event if the bank’s recent rhetoric discourages the market from betting against the Loonie in advance of the decision.

This is after Governor Tiff Macklem said in a November op-ed for the Ft that recent rising rates of inflation mean the BoC is increasingly likely to begin lifting its cash rate from the current 0.25% level at any point in the months ahead.

That led financial markets to wager with increased confidence that an initial rate rise could come as soon as January 2022, and whether the BoC says anything to vindicate these expectations in Wednesday’s decision will be an important influence on the Canadian Dollar’s performance this week.

However, some analysts expect the BoC could avoid giving such a signal this week due to uncertainty about the risks posed by the latest mutated strain of coronavirus, meaning that December’s statement may ultimately have an uplifting impact on USD/CAD and GBP/CAD.

“The Canadian rate market is priced for rate hikes to begin in Q1 so there could be some initial disappointment if the BoC does not step up their hawkish message next week but it should prove short-lived,” says Lee Hardman, a currency analyst at MUFG.

“CAD weakness could accelerate if USD/CAD breaks above 1.2950. However, we would still expect CAD weakness to prove short-lived as greater clarity emerges over Omicron risks and assuming global growth does not slow sharply,” Hardman and colleagues wrote in a research briefing on Friday.

The USD/CAD rate is, alongside the main Sterling exchange rate GBP/USD, one of two primary determinants of the Pound-to-Canadian Dollar rate and the two often demonstrate a positive correlation. 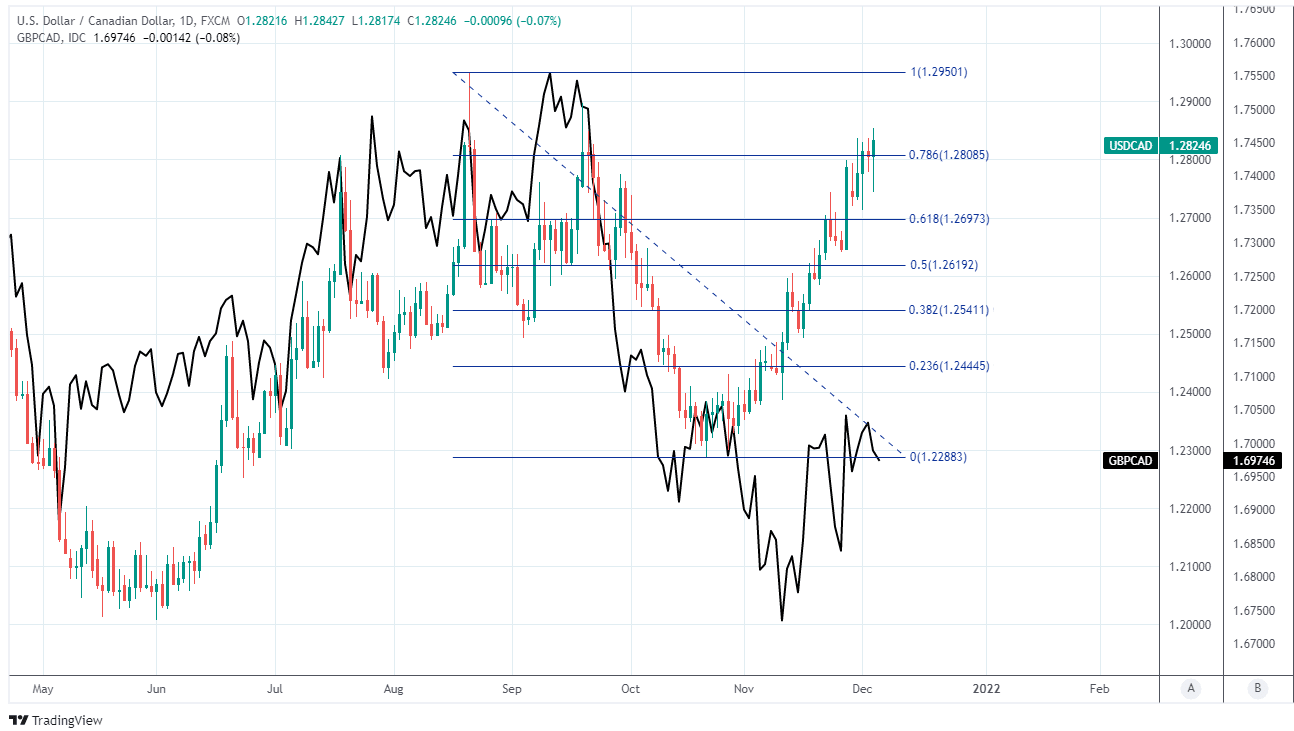 Above: USD/CAD at daily intervals with GBP/CAD and Fibonacci retracements of late August decline indicating likely areas of technical resistance.