The Pound-to-Canadian Dollar rate was closing in on three-month lows Tuesday as profit-taking appeared to blight Sterling ahead of this week's Bank of England (BoE) interest rate decision while the Loonie benefits from an ongoing bid due an improved domestic economic outlook.

Pound Sterling has been left the bloodiest by the nascent turn higher in the U.S. Dollar having previously outperformed all other major currencies, although losses have been steepest against the Canadian Dollar, which is now enjoying its own moment in the proverbial sun.

GBP/CAD fell more than half a percent in early trading Tuesday, taking its one-week decline to almost two percent, making it by far the largest of any Sterling exchange rate. This is after a barnstorming rally by the Canadian Dollar.

"The GBP had steadied around the 38.2% retracement for much of last week but weakness below the 1.7500/10 support zone (late 2020 highs and the 55-day MA) on Friday is tilting risks towards a bit more GBP softness here in the near-term, potentially back to the low/mid 1.72 range," says Juan Manuel Herrera, a strategist at Scotiabank. "We have been bullish on the CAD outlook in recent months but feel that CAD gains are starting to “push the envelope” of valuation at the moment. Further strength is not to be excluded but we need clear justification to support additional CAD gains from here."

Canada's Dollar was already bid following a surge in oil prices but outperformed last week following a trifecta of developments that are supportive of the domestic economy and local assets, which have all helped the Canadian Dollar to knock the Pound off the top spot in the major currency universe for 2021.

This is after the Bank of Canada (BoC) stoked expectations of another cutback in April to the amount of weekly bond purchases carried out as part of its quantitative easing programme, which could potentially afford further support to Canadian bond yields and the Loonie in the weeks ahead. 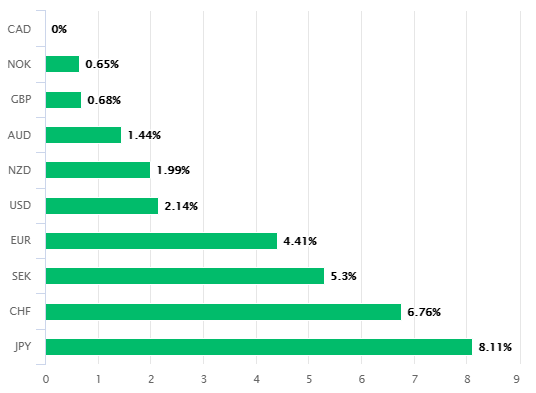 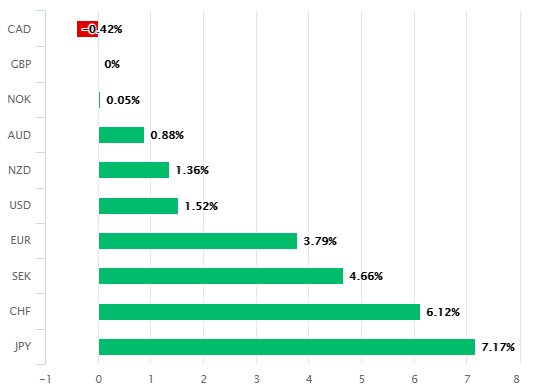 Canada's domestic backdrop was further sweetened on Friday by a blowout February jobs report, which has vindicated the Bank of Canada for its earlier assessment that a a previously-anticipated first-quarter contraction has likely been avoided owing to a raft of better-than-expected economic figures.

Added on top of all of this is last week's sign-off last week by President Joe Biden on a $1.9 trillion U.S. fiscal support package, which economists expect will have positive knock-on implications for growth not only in the U.S. but also across the border with Canada, thus giving the Loonie a further shot in the arm.

Nonetheless, and with USD/CAD now comfortably beneath the 1.25 handle, further downside may be limited in the short-term and likewise for the main Sterling exchange rate GBP/USD which was nearing 1.38 and an important level of technical support on Tuesday.

Such outcomes would see GBP/CAD stabilising near to 1.7250 ahead of Wednesday's Federal Reserve (Fed) decision and Thursday's BoE decision,

"Continental European currencies have gained slightly on GBP and the commonwealth currencies, but it has been a quiet interlude as markets await Wednesday's FOMC," says Stephen Gallo, European head of FX strategy at BMO Capital Markets. "Given the importance of narratives, it's also worth considering that the bounce in EURGBP has coincided with various headlines related to the suspension of Oxford/Astrazeneca vaccine jabs in a number of countries. For the time being, we're inclined to view this as a sentiment-related factor rather than a fundamentally bearish issue for the GBP."

Further GBP/CAD losses could be limited in the short-term, although retail exchange exchange rates were already quoted below 1.70 at the high street banks on Tuesday and risks would tilt more evidently to the downside if CIBC Capital Markets is right betting on another imminent leg higher for the Loonie.

"They say to beware the ides of March. We say beware missing out on attractive entry points to long CAD tactical trades," says Bipan Rai, North American head of FX strategy at CIBC. "We’re going short USD/CAD spot here (1.2480) and targeting a move to the 1.2250 with a s/l at 1.2590. The target level coincides with the next major level of support on weekly charts going back a few years that we envisage being tested in the coming weeks."

With increasing numbers of EU countries halting use of the Astrazeneca vaccine and the European Commission beating its chest with purported legal action over British government moves to preserve a hard won peace in Northern Ireland, the backdrop has become a testing one for Sterling. Europe's lacklustre vaccination programme has been highly politicised since inception, while Brussels' complaint about unilateral administration of Northern Ireland - from Westminster - follows lobbying from unionists and comes after EU staff had to be withdrawn from the province due to a unionist threat of violence. At the heart of the matter is the so-called Northern Irish backstop.

"The market is wondering whether the Fed is going to say anything to put a lid on bond yields," says Kit Juckes, chief FX strategist at Societe Generale. "With the EU taking the UK to court over unilateral decisions about the border, recent sterling longs are a bit more nervous. EUR/GBP has dropped from above 0.92 to below 0.86 in a few months and a correction, as sterling longs are also cut back, is quite likely. Is there anything more serious going on? I doubt it." 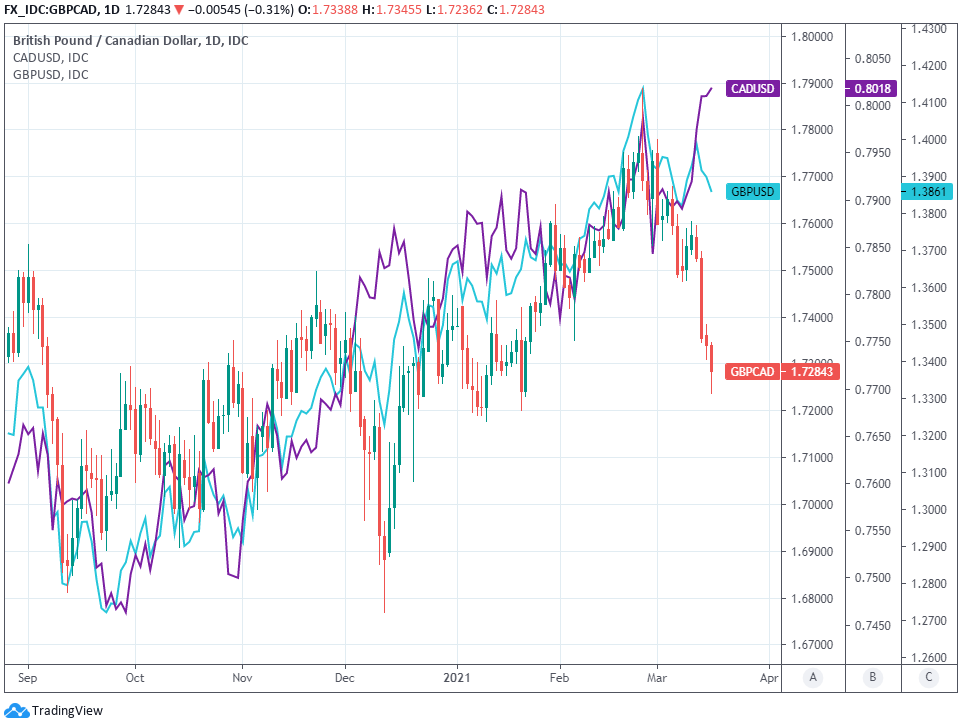 The Pound-to-Canadian Dollar rate, which always closely reflects relative price action in USD/CAD and GBP/USD, would fall back to December 2020 levels beneath 1.70 if USD/CAD fell to 1.2250 and the main Sterling exchange rate GBP/USD remained around Tuesday's 1.38.

Thursday's BoE decision is the highlight of the week for Sterling, from which investors will be looking to see if the Bank is comfortable with recent increases in British bond yields and market expectations for UK interest rates to begin rising as soon as next year. Any ambivalence by the BoE toward market pricing for a 2022 rate hike would see the Bank in the running to become one of the first major central banks to begin normalising its policy settings.

That would be positive for Sterling although such an outcome would be thanks in no small part to one of the fastest vaccine rollouts in the world, which could potentially be called into question over the coming weeks if the Astrazeneca shot finds itself suspended from use in Europe on an ongoing basis.

More so if reasons for doubting its safety begin to be found in its home market, the UK. These are the biggest risks for GBP/CAD, which would rise back to 1.75 over the coming days if Thursday's BoE decision succeeds in lifting GBP/USD back to 1.40 while USD/CAD trades just beneath 1.25. 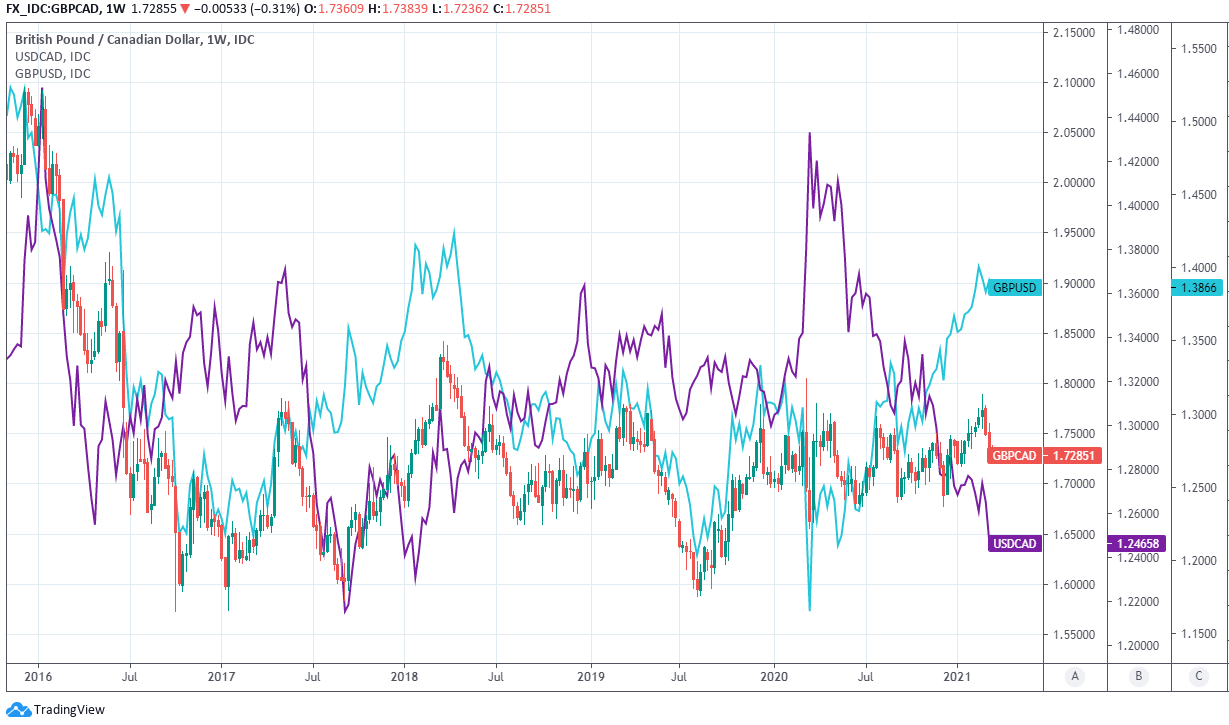