Pound Sterling has advanced against all major counterparts this week with its largest gains coming against both the U.S. Dollar and Canadian Loonie, leaving the Pound-to-Dollar rate 2.78% higher for the period on Friday and the Pound-to-Canadian Dollar rate 2.76% higher at the time of writing.

Matching gains for GBP/USD and GBP/CAD illustrate the extent of the Canadian underperformance this week, which has come alongside more punishing losses for the U.S. Dollar against all majors.

"Sterling blew through the 1.3000 level after hardly a pause as the general USD rout continued, with little differentiation across USD pairs (i.e., sterling strength not a particular stand-out yesterday with USD weakness doing all of the lifting in moving the pair), save perhaps for the CAD lagging badly – likely on its closer link to the US," says John Hardy, head of FX strategy at Saxo Bank.

The Pound-to-Canadian Dollar rate rally was flagged in advance by strategists at Canada's Scotiabank, who also say there's upside to around 1.77. 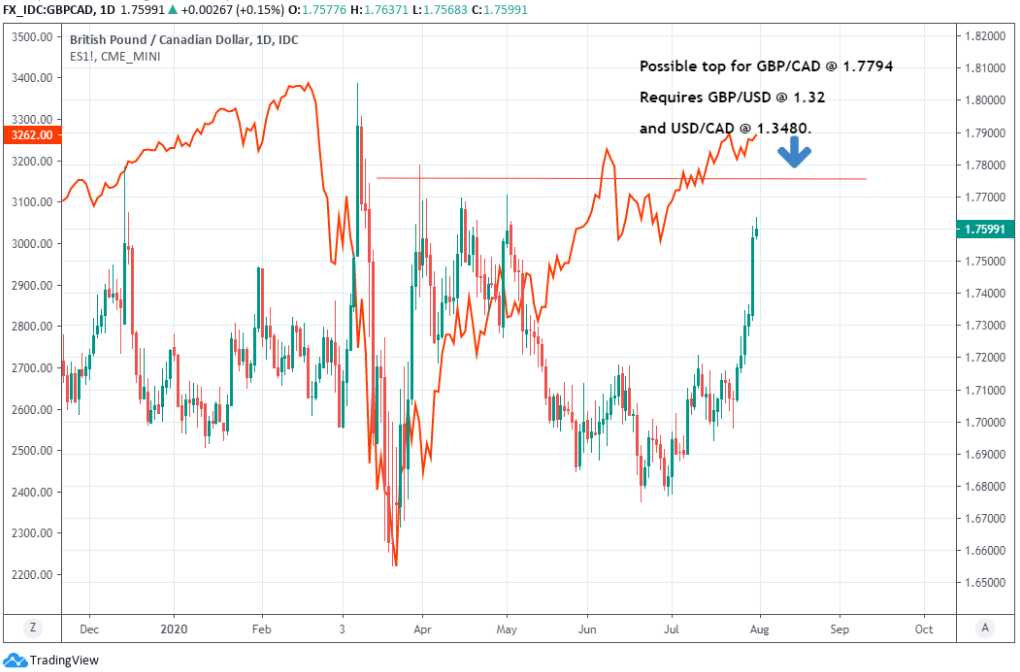 The Pound-to-Canadian Dollar rate is likely to trade in a 1.7555-to-1.7659 range on Friday if GBP/USD remains around 1.31 and analysts at RBC Capital Markets are right in anticipating a roughly 1.34-to-1.3480 range in USD/CAD. The latter two exchange rates dictate the level of GBP/CAD.

Once past Friday, Sterling could rise to between 1.7689 and 1.7794 over the coming days, which represent three and four-month highs respectively, in the event that technical analysts are right about the outlook for the GBP/USD and if USD/CAD remains between the support and resistance levels flagged by RBC.

"GBP/USD has maintained upside pressure and is poised to reach the 1.3175 the 2015-2020 downtrend. The 1.3201 March 2020 high lies just above here and we would allow for this to hold the initial test," says Karen Jones, head of technical analysis for currencies, commodities and bonds at Commerzbank. 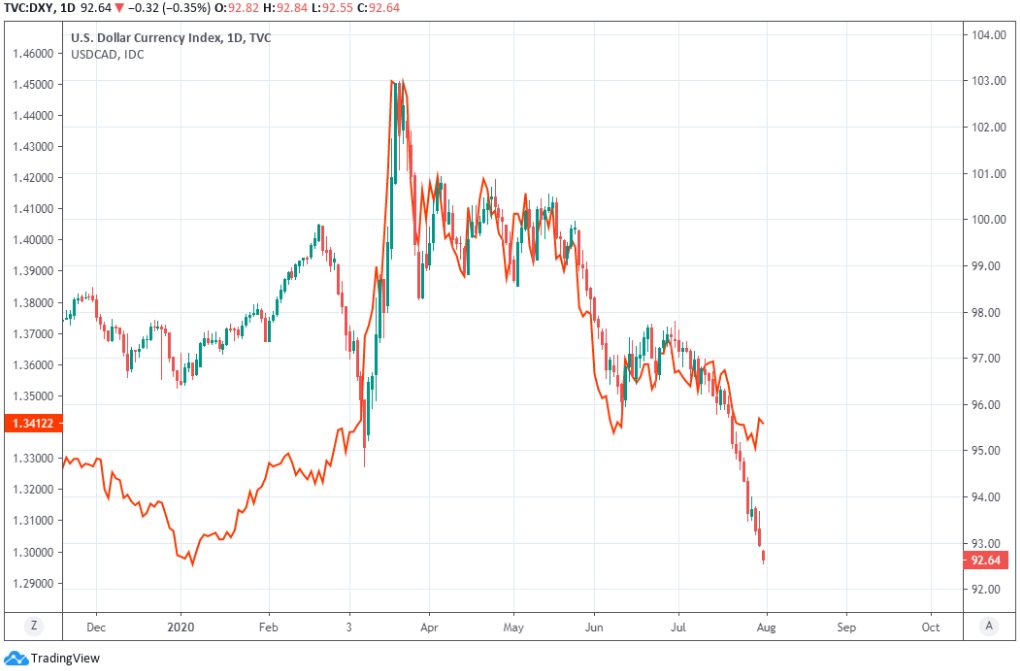 But in the event that Canada's Dollar rediscovers its lost mojo, the downside for the Pound-to-Canadian Dollar rate could be large even in the event that Sterling is able to hold onto the ground recently retaken from the U.S. Dollar.

A USD/CAD rate that trades catches up with the Dollar Index by trading back down to 1.30 would crush the Pound-to-Canadian Dollar rate even with GBP/USD at March highs around 1.32. This scenario implies a GBP/CAD rate of 1.7134 and an unwinding of this week's gains.

"The CAD has underperformed others like the euro, and the rally is now running on empty. The strength in CAD appears set to reverse in short order as relatively weak fundamentals are revealed, and the global economic recovery stalls, giving a safe haven bid to the USD. We see USDCAD ending the third quarter at 1.37," says Katherine Judge, an economist at CIBC Capital Markets.

CIBC doubts the Canadian Dollar will recover its footing and is forecasting a USD/CAD that would lift the Pound-to-Canadian Dollar rate to between 1.7947 and 1.8084 in a world where GBP/USD was trading between 1.31 and 1.32. 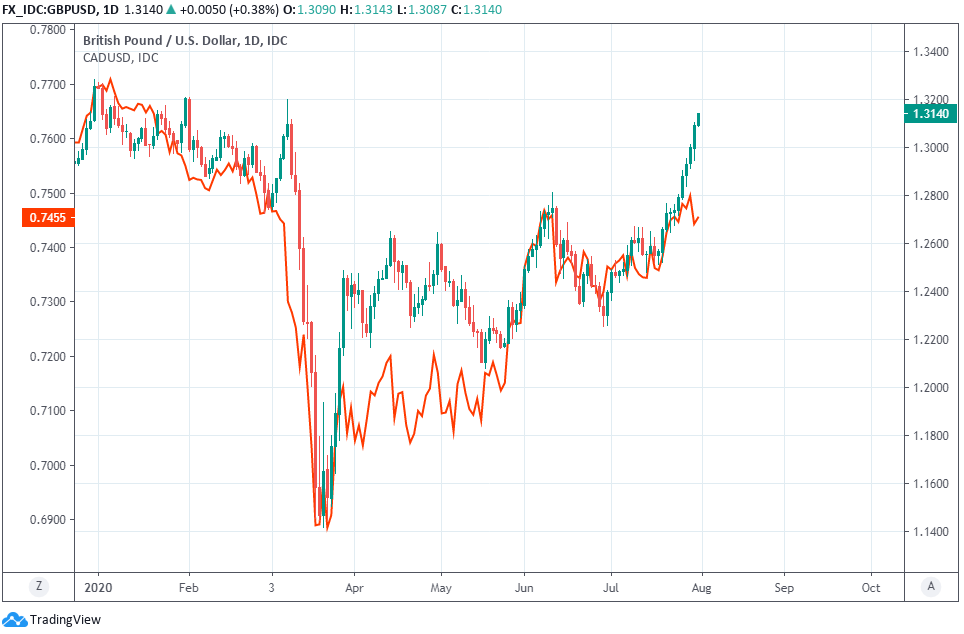 It's a long way from certain that Pound Sterling will be able to hold those levels against the greenback however, given how far the U.S. Dollar has fallen of late and fact that in the absence of North American weakness, GBP/USD gains are somewhat a mystery to many.

The Pound-to-Dollar rate may be benefitting from a positive technical backdrop and tailwind of support whipped up last Friday when often-unreliable IHS Markit PMI surveys pulled ahead of their Eurozone counterparts and retails sales recovered much of their coronavirus-induced losses.

These numbers followed a lengthy period of underperformance by the British currency and came amid a favourable divergence in epidemic curves on either side of the English Channel that has garnered attention this week but which doesn't necessarily say very much at all about the outlook for Sterling.

BofA Global Research downgraded forecasts for the Pound-to-Dollar rate this week while others are looking for Dollar weakness to keep the pair, and others, supported or to even lift them further.

"USD/CAD has traded in a tight (1.35-1.36) range over the last month, underperforming higher-beta cyclical currencies, which have broadly continued to appreciate against USD on persistently buoyant risk appetite," says Ben Randol, a currency strategist at BofA Global Research. "We have recently revised our USD/CAD forecast on the back of a substantial upward shift in our oil price assumption. We now expect 1.37/3Q and 1.40/4Q, moderating back to 1.35 by the end of H1 2021...The main risks to our medium-term bullish USD/CAD view are higher risk assets and oil." 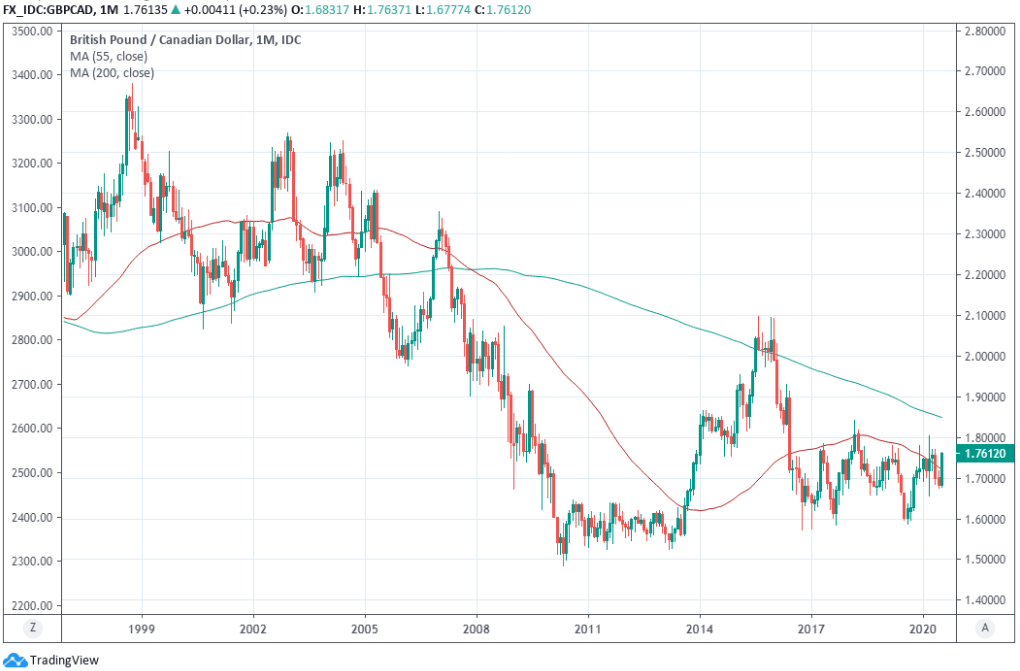 Above: Pound-to-Canadian Dollar rate shown at monthly intervals with 55 and 200-month moving-averages.