The Pound-to-Dollar rate was carried across another key rubicon in its ninth consecutive gain on Wednesday as an exodus from the greenback resumed, but BofA Global Research says adverse seasonal trends and the trajectory of Brexit talks means fresh underperformance is just around the corner.

Investors have fallen out of love with the Dollar as economic prospects have improved outside of the U.S. while another surge of new coronavirus infections has stoked concerns about the American recovery.

The U.S. rebound is under threat months out from a presidential election that has seismic implications for the global as well as domestic outlooks, while the White House incumbent is flagging in the polls and as a result, offering investors a glimpse of a world unimpeded by trade conflict with China or Europe.

These headwinds come with the Dollar dressed in a Federal Reserve straitjacket since late March when the bank began to expand its balance sheet through the creation of new money that was directed toward bond markets of all stripes as well as some commercial lenders.

"The overwhelming consensus view going into today’s Fed meeting is that the worsening US COVID situation/outlook for the US economy will force the Fed to adopt an even more dovish tone," says Eric Bregar, head of FX strategy at Exchange Bank of Canada. " We have to think that the leveraged funds have lightened up on their net short GBPUSD position given the market’s breakout above the 1.2750s on Friday and it’s shattering of 1.2800 chart resistance on Monday, but we think the “pain trade” for this market is still higher and we wouldn’t stand in the way of this rally until we see a notable sign of buyer failure.  Today's Fed meeting could provide an inflection point." 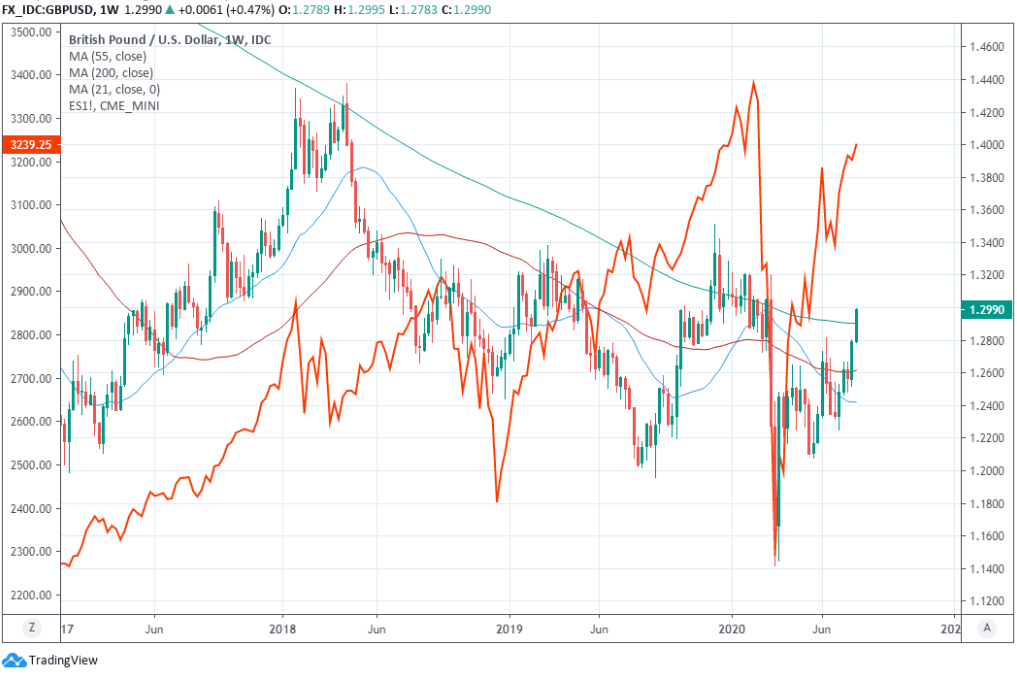 The Fed balance sheet has expanded from $4.2 trillion to just less than $7 trillion since the beginning of March, risking a Dollar glut which when combined with signs of a more robust economic recovery in Europe and other parts of the world, triggered an exodus from the greenback.

That exodus helped carry the Pound-to-Dollar rate across its 200-week moving average at 1.2904 in Tuesday's session while Wednesday trading saw the British exchange rate advance further before testing the 1.30 handle.

A weekly close above 1.29 would be a bullish development for the Pound-to-Dollar rate outlook as far as technical analysts are concerned, and would indicate a continued advance that potentially extends as far as 1.3186, a level not seen since before the coronavirus crossed the English Channel.

"It is possible that we will see some near term profit taking around here as we note the TD perfected set up on the daily chart (this is a warning signal). Above here lies the 1.3186 the 2015-2020 downtrend. Dips lower are expected to find initial support at the 200 day ma at 1.2699 and remain contained by the 1.2480 July 14 high and the 1.2506 support line," says Karen Jones, head of technical analysis for currencies, commodities and bonds at Commerzbank. 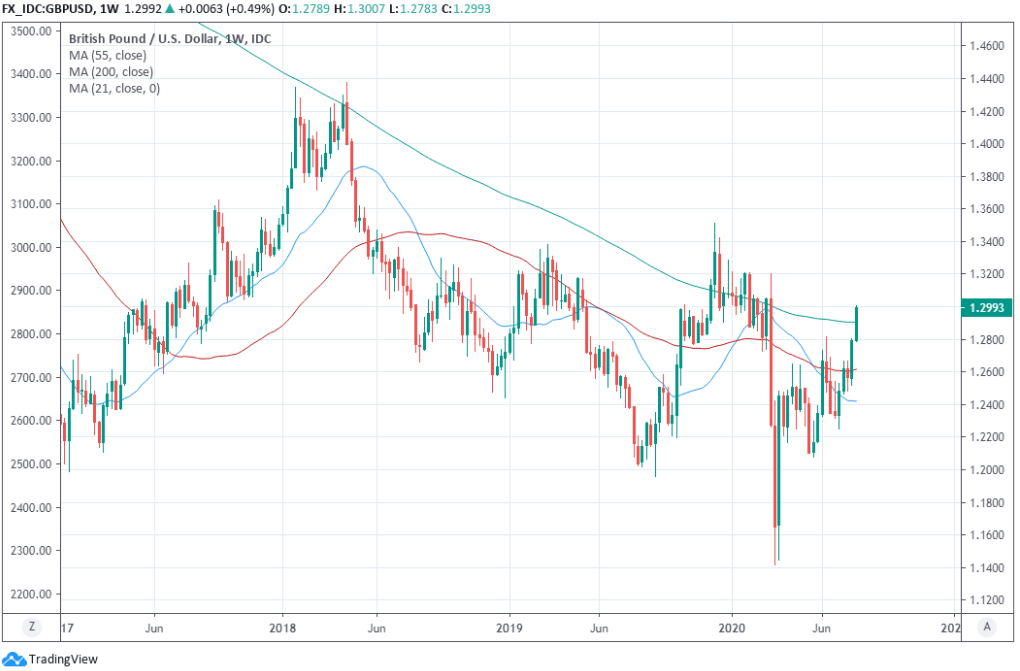 The ongoing rally in GBP/USD might be supported on the domestic side by last Friday's IHS Markit PMI surveys that pulled ahead of their European counterparts and retail sales which recovered much of their 2020 falls by June.

But Sterling has been left trading at lofty levels so even without a change of heart toward the U.S. currency, the Pound-to-Dollar rate could be vulnerable as July turns to August, which is a month that's typically marred by underperformance in the British currency.

BofA Global Research warned this week that August is second only to December in terms of adverse seasonal influences on Sterling when downgrading forecasts for GBP/USD and other British exchange rates.

"Adding to our bearish views is a clear seasonal pattern in GBP through the final five months of the year," says Kamal Sharma, a strategist at BofA Global Research. "The specifics of this seasonal underperformance are not clear, but we opine that deteriorating liquidity conditions in GBP have probably exacerbated moves in August and December in recent years as summer markets (August) and Festive holidays (December) impact trading conditions." 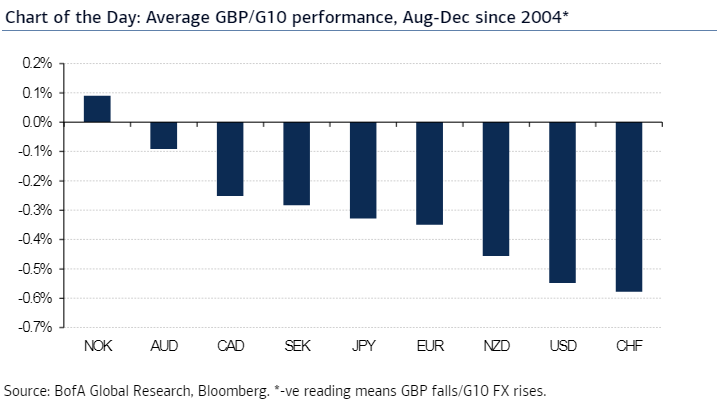 Above: Pound Sterling's average performance against G10 rivals between August and December since 2004.

Sharma says that with the exception of the Norwegian Krone there's been a systematic undeperformance of the Pound from August until year-end dating back to 2004, which tends to come alongside outperformance by the Swiss Franc and U.S. Dollar and is indicative of risk-aversion among investors.

August is typically a holiday month for market participants and so can often be characterised by low trading volumes that magnify the impact of even relatively small orders, leading to higher volatility.

BofA Global Research forecasts Sterling will fall back to 1.23 by the end of September and 1.17 by year-end, rather than rising to 1.32 and 1.34 respectively as had previously been envisaged.

Seasonality, Bank of England monetary policy and the Brexit talks are all expected to weigh on the Pound into the Autumn. Negotiators have until year-end to reach an agreement technically, although in reality the deadline is actually October if the agreement is to be brought into force before the December 31 end of the transition period.

"What matters is not whether a deal will be struck, but the substance of that deal. We think the market has gone past a simple binary choice of deal = positive GBP, no-deal = negative GBP. Even if a deal is reached, it is likely to be a bare-bones, skinny deal that implies the reintroduction of non-tariff barriers," Sharma says. "The two scenarios are bearish for GBP: while a no-deal would have the most immediate macro and FX impact (1.10 in GBP/USD; 0.95+ in EUR/GBP), a bare-bones trade deal would mean a bleed lowerin GBP over the course of 2021. This is the scenariothat forms the basis of our forecast profile."