- Even as risk appetite evapourates amid U.S.-China tensions. 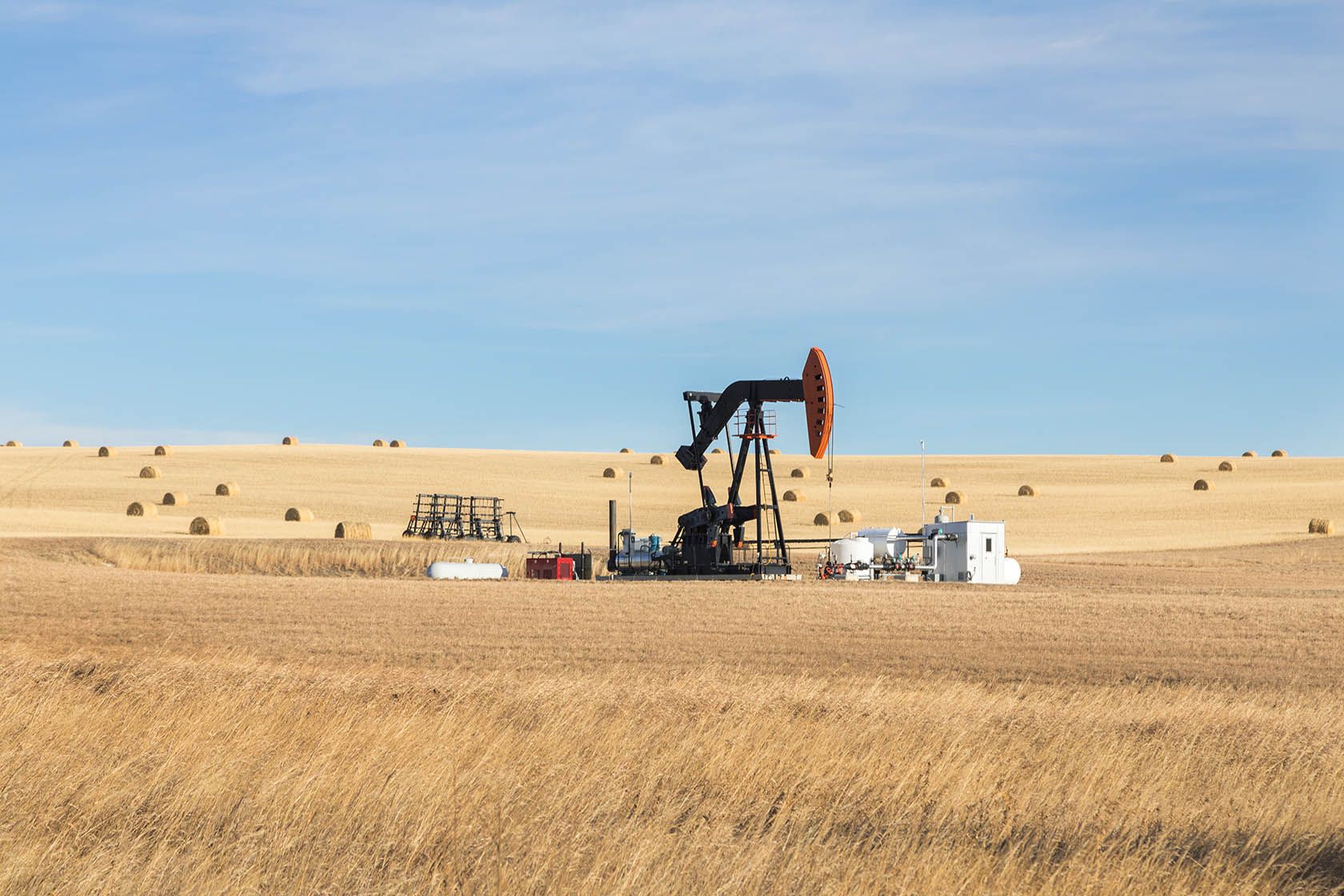 The Canadian Dollar outperformed many rivals Thursday after being lifted by an infectious optimism emanating from the oil market, which has helped the Loonie to keep a whimpering and wavering Pound Sterling under pressure and is now threatening even steeper downside for the GBP/CAD rate.

Canada's Dollar ceded ground to the greenback and safe-haven Swiss Franc Thursday but got the better of the mighty Japanese Yen while trouncing a sickly and paling Pound Sterling, despite a sudden bout of risk-aversion that sank global stock markets as the U.S. and China traded barbs through the media.

Gains accrued to the Loonie amid a turn higher in the oil market that lifted WTI crude by more than 3% to $26 per barrel, taking its one-week gain into the double-digit percentages in the process while the global benchmark Brent crude also rose more than 3% to cross the $30 per barrel threshold.

Prices of Canada's largest export have recovered handsomely off April lows and helped lift the Loonie on Thursday. Canadian Dollar gains and weakness in the British currency put the Pound-Canadian Dollar rate on course for a fourth consecutive daily decline and prompted a foray below key support at 1.72.

This particular Sterling exchange rate could now be at risk of falling to 1.7108 and then 1.6801 over the coming days and weeks. However, these rates would only available at interbank level, with those quoted to retail and SME participants likely much lower. Specialist payments firms can help squash the spread between interbank and retail rates.

Thursday's price action came with stock markets and bond yields under pressure as investors contemplated what might happen to the fledgling recovery if an already-bombed-out global economy is subjected to a second edition of the U.S.-China trade war, which was growing more likely on if remarks made by President Donald Trump in an interview with Fox News and comments from one of the Chinese government's publications are anything to go by. 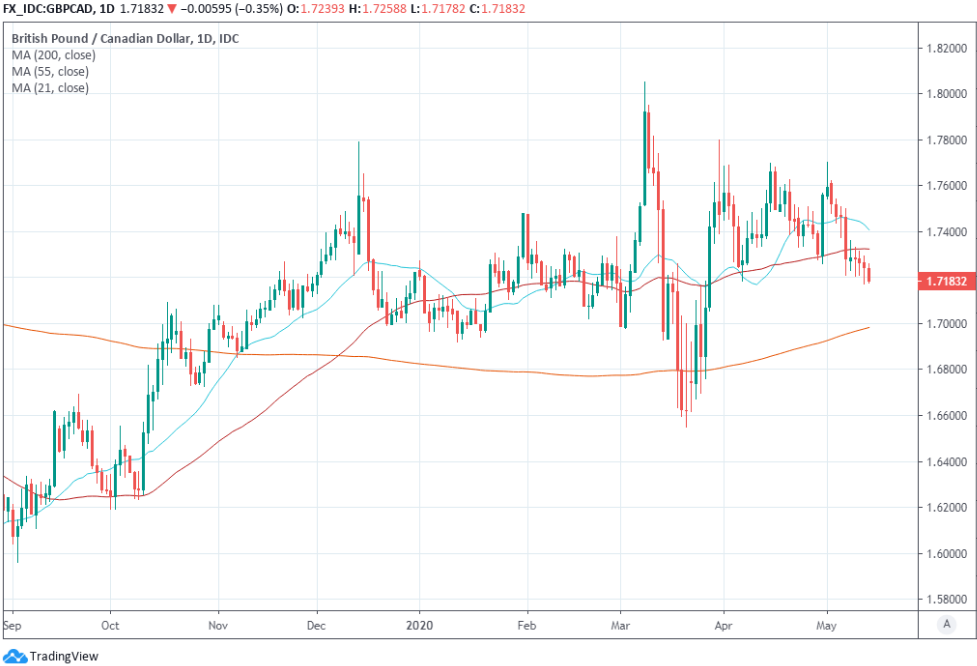 "I’m sure you’ve read this elsewhere, but this is a dark time for bilateral relations between the two powers. There are lots of reasons for sabre-rattling, but one of the more important ones is that Trump is slipping in the polls for key swing states ahead of this November. There IS a reason why we’re looking at Trump/Biden polling this early – and it’s because the ‘rally around the flag’ effect can be powerful enough to turn the tide," says Bipan Rai, North American head of FX strategy at CIBC Capital Markets. "CAD’s been an outperformer overnight as commodities firm, but we still think that risks are to the upside of our 1.38-1.43 range. Broad USD moves are the primary driver for now."

Pound-Canadian Dollar losses are not traditionally seen during bouts of risk aversion but the market has come to regard Sterling in a somewhat different light since the coronavirus crisis prompted the government to dig deep into already stretched, worn and somewhat tattered pockets. Thursday's gains for oil prices are also incongruous with risk aversion, although the resulting constraint on the USD/CAD rate will have contributed to losses for GBP/CAD, which is an amalgamation of USD/CAD and GBP/USD.

"The retreat in GDP reported in Q1 has underlined the extreme fiscal challenges to be faced," says Jeremy Stretch, a European CIBC counterpart of Rai's. "We continue to look for a cheaper GBP, beyond just looking for 1.2150 in Cable. Look for GBP/JPY to take out 130 on the way back to 125 while GBP/CHF continues to trade on a key support, look for a solid break lower." 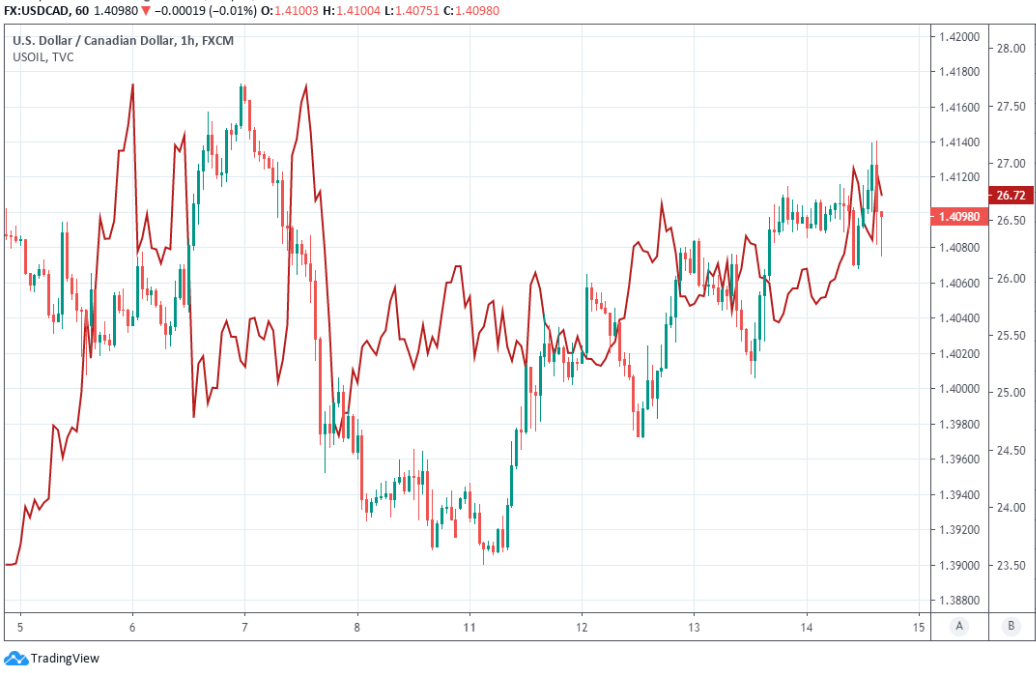 Risk aversion was rising Thursday after President Trump told Fox "we could cut off the whole relationship" with China, as the two sides seek to implement the January 'phase one deal' that ended the trade war between them while also trading accusations relating to the coronavirus pandemic.

"We think FX traders are seeing through this banter and are instead quickly refocusing on the prospects for growing US/China tensions after Fed chairman Powell formally killed negative rate speculation yesterday.  A big dollar-negative has been removed (at least for now) and there’s frankly a lot things for traders to start worrying about once again, which could manifest itself in the form of “risk-off” USD buying," says Eric Bregar, head of FX strategy at Exchange Bank of Canada. "We continue to watch USDCAD for a potential NY close above the 1.4120s as we think this could create enough positive momentum for traders to re-challenge the topside of the trading range we’ve been talking about since late March.  A breakout above the 1.4220s, in turn, would invite a new uptrend."

China is said to be seeking a renegotiation of the trade pact, which the White House has refused, while President Trump appears to be coveting a reckoning over the exact origins of the coronavirus and the Chinese government's initial handling of it. Trump's remarks were accompanied by the claim that "it's a great time to have a strong dollar," although he's often railed against Dollar strength. 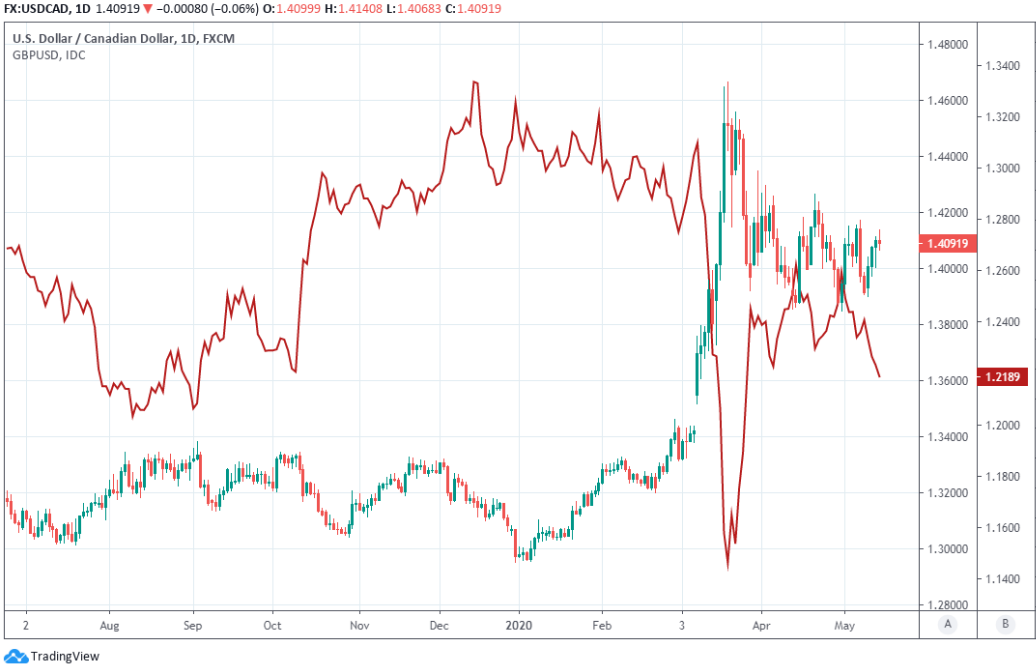 Above: USD/CAD at daily intervals, falls in tandem with GBP/USD in price action that is bearish for GBP/CAD.

Trump's Thursday remarks came with lawmakers legislating and citizens litigating in the courts over allegations that the Chinese government attempted to cover up the coronavirus when it first appeared in Wuhan, rather than recognise the problem and then notify international bodies as well as counterparts. American lawmakers are attempting all manners of mischief relating to China's access to the U.S. capital markets and the financial system while citizens are suing for eye watering damages.

Meanwhile, the editor of China's Global Times newspaper, which is widely perceived in the market as an unofficial English language mouthpiece for the government, said Beijing will retaliate against U.S. entities and individuals for any litigation. There was also a claim suggesting; "The two countries increasingly dislike each other, various conflicts are rising, therefore, risk for a military clash is increasing. But meanwhile, they both don't want a war."

Any return to trade hostilities between the U.S. and China would only serve to heap more pressure on the embattled global economy and to lift the U.S. Dollar, although what matters most for the Pound-Canadian Dollar rate is which of GBP/USD and USD/CAD moves faster and further. Another trade war might wallop oil prices, which would be bad for the Loonie, but it could also exacerbate the troubles of an already frail Pound Sterling. 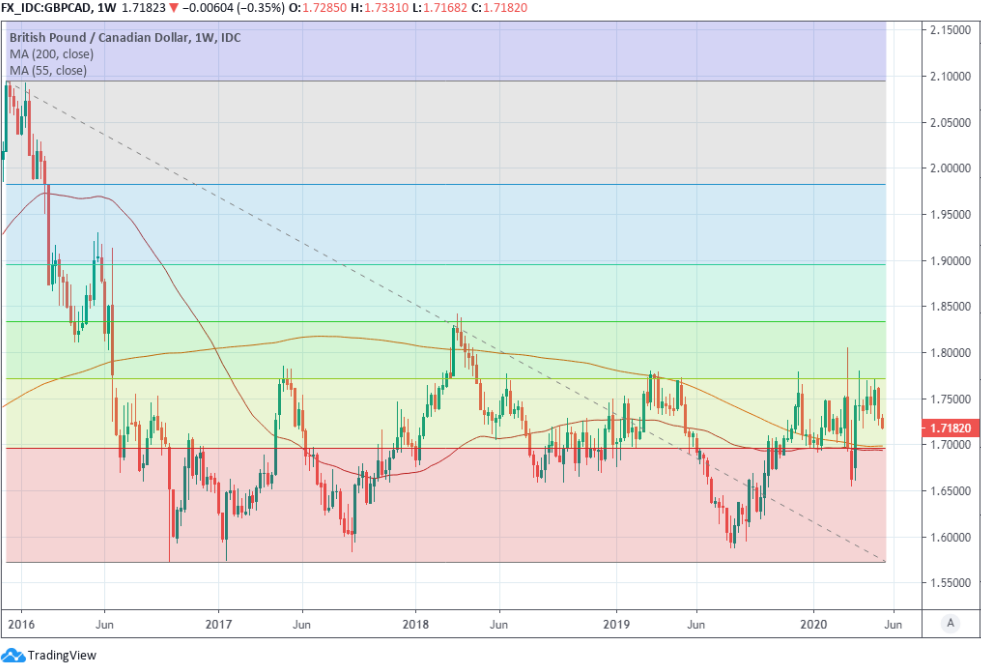 Both Exchange Bank of Canada and CIBC are looking for USD/CAD to turn higher and target the top of a roughly 1.38-1.42 range, which are outlooks that might need to crystallise in order to prevent the Pound-Canadian Dollar rate from revisiting the bottom of its 2020 range beneath 1.70 given Sterling's mounting losses against the U.S. Dollar. Sterling is the worst performing major currency of May and has fallen -1.4% against the U.S. Dollar this week, but many see it vulnerable to more losses ahead.

"GBPUSD is poised to weaken—and perhaps in a meaningful way. April/May price action has seen Cable capped right on the 200-day MA twice and the current pressure on the intervening low (1.2252) suggests a double top signal is about to be triggered (implying around 400 ticks of downside potential and putting the GBP on course for a test of the mid 1.18s)," says Juan Manuel Herrera, a strategist at Scotiabank. "USD losses below 1.4080/85 have checked the advance from a technical perspective. The 6-hour chart suggests bearish outside range action has developed, which puts something of a firmer ceiling on the USD from a near-term perspective. How far the USD declines is hard to assess, however; we see support at 1.4065 and (minor trend) at 1.4050. Below here opens up a retest of 1.4000/20."

Scotiabank sees the GBP/USD rate on route to somewhere between 1.18 and 1.19 while being unsure of the exact end destination to the downside for USD/CAD, which is bearish for the Pound-Canadian Dollar rate. Even in the unlikely event that USD/CAD remained static at 1.4087, the aforementioned decline in GBP/USD would be enough to sink the Pound-Canadian Dollar rate and leave it wallowing in a 1.6624-to-1.6765 range. However, Sterling's losses would be even larger if USD/CAD continues to decline from Thursday's levels.