- GBP/CAD to continue its consolidation in short-term, Scotiabank says,

- But will resume upward correction, target its March high, before long.

- GBP's election response could have last word on GBP/CAD this year.

The Pound-to-Canadian-Dollar rate remains on course to return to its March 2019 high in the weeks and months ahead but could continue to consolidate within a narrow range for the time being, according to strategists at Scotiabank.

Sterling was treading water against the Canadian Dollar Thursday after both ceded ground to the U.S. greenback amid fresh unease in markets over the trajectory of U.S-China trade relations. But Scotiabank, ranked as Canada's third largest lender by S&P Global Market Intelligence, is looking for the British unit to continue the upward correction that was born in August this year.

"GBPCAD remains in consolidation mode," says Scotiabank's Juan Manuel Herrera, in a research briefing to clients this week. "We note that the short, medium and longer run trend strength oscillators are bullishly aligned for the GBP through the consolidation and that the pattern of trade (bull wedge) suggests a resumption of gains above 1.7080/010." 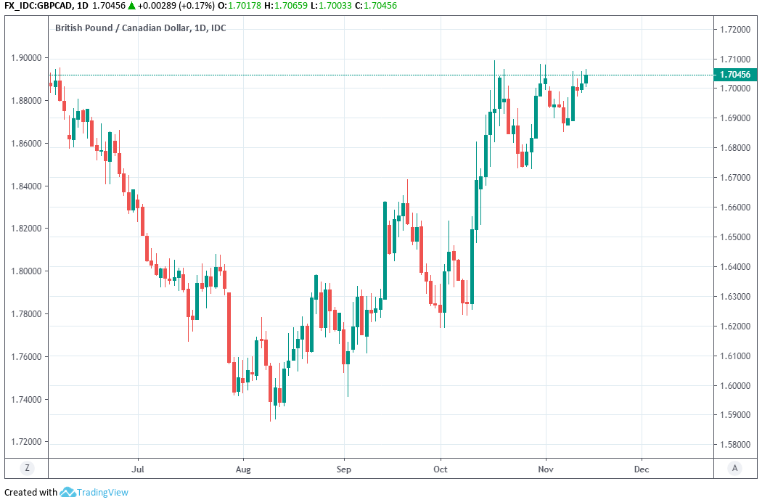 October's 'phase one deal' to end the trade war no longer seems to be the sure thing it was billed as by President Donald Trump, who this week adopted a less optimistic and more aggressive tone in relation to the talks between the world's two largest economies. And The Wall Street Journal reported Wednesday that those talks have all but stalled as China again appears to backtrack on commitments that were once said to have been agreed.

The Pound-to-Canadian-Dollar rate is being driven by a triangle of forces encompassing events around trade policy in the U.S, Brexit in the UK and the economic story on the ground in Canada. But trends in price action on the charts as well as the rising and falling levels of momentum behind it, are also providing strong indications of where the exchange rate might head next. 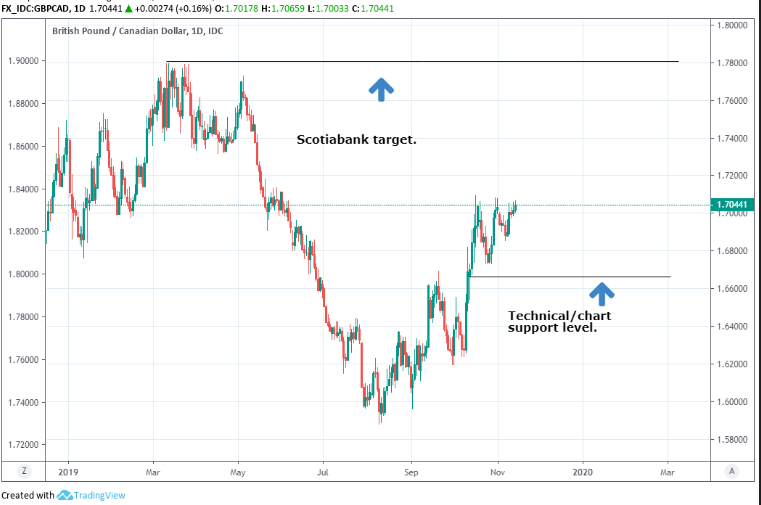 Above: Pound-to-Canadian-Dollar rate shown at daily intervals and annotated to include Scotiabank targets.

Scotiabank says the charts are suggesting the Pound-to-Canadian-Dollar rate will return to the now-lofty heights of March 2019, which was a month that brought with it the beginning of a steep downturn for most British exchange rates. Since then ongoing uncertainty over the UK's EU-exit pathway as well as future trade arrangements with some of its largest markets, have weighed heavily in UK interest rate expectations and the Pound.

Herrera tipped 1.78 as a prospect earlier in November, a level that implied 5% upside for the exchange rate at the time but which suggested on Thursday, a modestly lesser increase of 4.4%. Sterling is still down against the Canadian Dollar for the year overall even though it has risen by 6.13% during the three months to the middle of November. That's testimony of the extent to which a strong Canadian economy and Dollar, not to mention Brexit, had weighed on the Pound-to-Canadian-Dollar rate earlier this year.

"USDCAD is trapped between long term support (1.3105) and resistance (at 1.3395). Having failed to sustain the break of long-term support through late Oct, a retest of the upper 1.33s appears likely," Herrera says. "The USD has a fair bit of wood to chop through the upper 1.32s and low/mid 1.33s first." 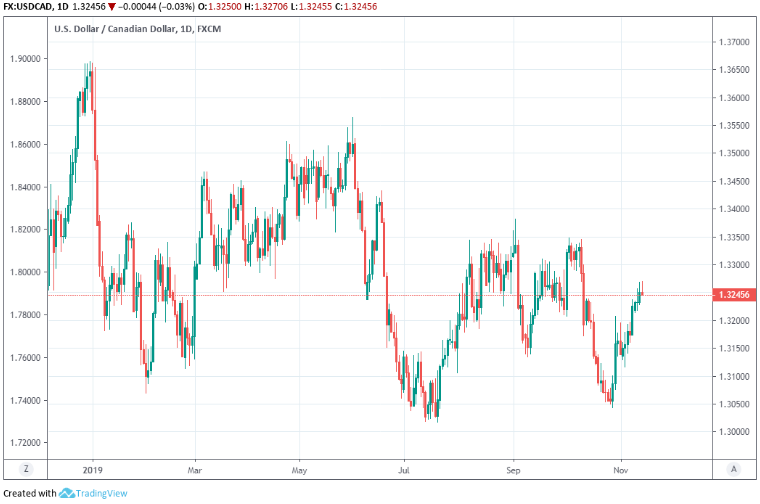 What matters most in determining the trajectory of the Pound-to-Canadian-Dollar pair is the relative performance of the GBP/USD and CAD/USD exchange rates. On these scores the Canadian economic story and latest developments in the Brexit saga will alternate between each other as the most dominant drivers of the exchange rate, although Scotiabank charts suggest a lower CAD/USD and steady GBP/USD up ahead, keeping the GBP/CAD bias to the upside.

Across the Pond what matters most to the Loonie in the economic story are the implications for Bank of Canada (BoC) monetary policy. The BoC hinted strongly in October that it could cut Canada's cash rate in the months ahead to provide the domestic economy with some insurance against the disinflationary threat that is the ongoing global growth slowdown.

And since then disappointing labour market and GDP numbers have encouraged markets to take the BoC's hints a bit more seriously.

Canadian economic and interest rate resilience has played a key role in making the Loonie the best performing major currency of 2019 but the outcome of the UK's December 12 general election could have just as big an impact on whether it remains there by year-end.

Many tip the GBP/USD rate for meaningful gains if Prime Minister Boris Johnson wins a parliamentary majority in the looming election, gains which if not accompanied by Canadian Dollar strength, would risk elimating the 2.05% edge that the Loonie still held over Sterling for 2019 on Thursday. 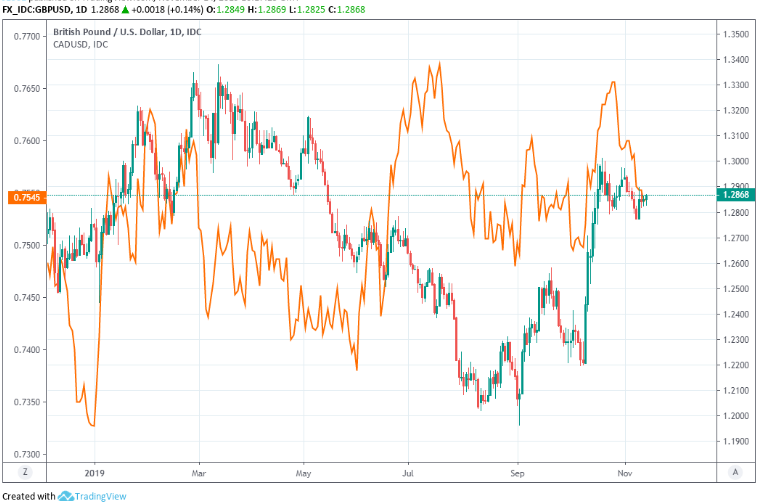