- GBP/CAD outlook turns bullish on the charts across all timeframes.

- GBP is aiming higher and has March peak in sight says Scotiabank.

- Scotiabank target implies 5% upside for GBP/CAD rate up ahead.

- Target could put GBP back in 1st place among major rivals for 2019.

- But looming election and narrowing opinion polls may scupper GBP

The Pound-to-Canadian-Dollar outlook has turned bullish across all axes on the charts, according to strategists at Scotiabank, priming it for move that could ultimately take the British currency back to levels not seen since March when the "dither and delay" chapter of the Brexit saga began to be written in earnest.

There's 5% upside left in the Pound-to-Canadian-Dollar rate if trend signals coming from the charts are to be believed, while dips lower on the road ahead may now be shallower and lesser in number than was previously thought. Such a move would backfill the rest of the trough dug for Sterling from late March onward, when the first of three delays to the UK's exit from the EU led investors to mark down their expectations for interest rates in the years ahead.

"The underlying trend higher in GBPCAD remains quite well entrenched, we think; short, medium and longer term trend oscillators are bullishly aligned and the GBP responded positively to the Oct drop to support in the low 1.67 area (via a bullish outside range week through last Friday)," says Juan Manuel Hererra, a strategist at Scotiabank. "We had expected more consolidation."

Sterling was still the best performing major currency of the last month on Wednesday and reamained in second place for 2019, behind only the Canadian Dollar which is now the joint-highest-yielding currency of the so-called G10 group. That yield is a significant draw for investors even if the Bank of Canada (BoC) has hinted it could cut rates in the coming months, but it might not be enough to prevent the Pound from clawing back more lost ground. 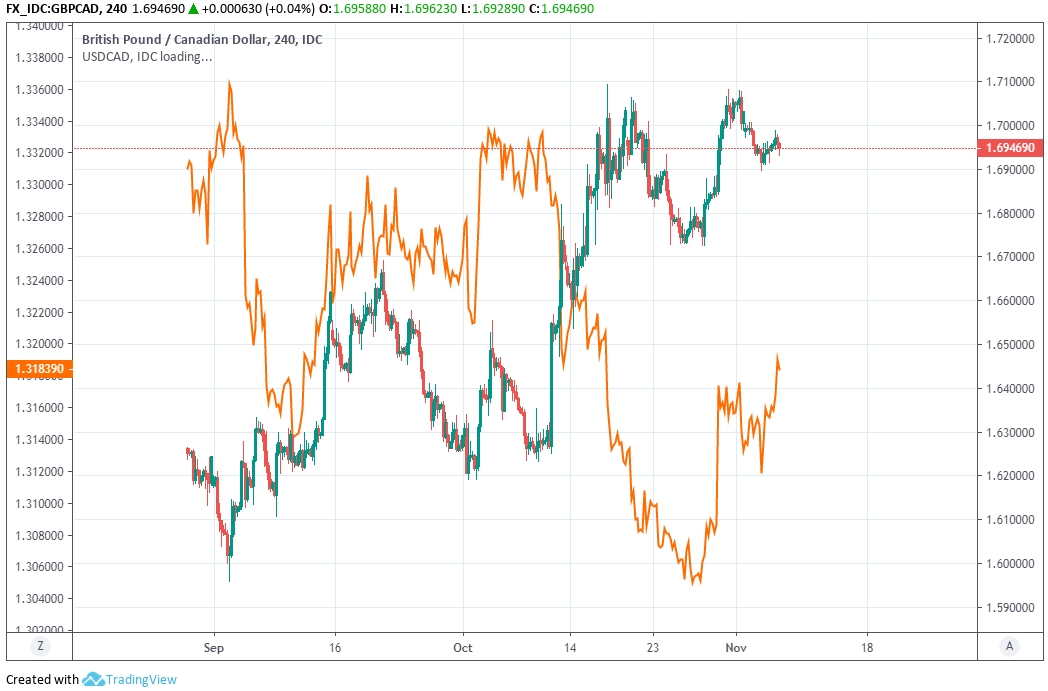 Above: Pound-to-Canadian-Dollar rate shown at 4-hour intervals alongside USD/CAD rate.

The Pound has risen by 4% against the Canadian Dollar in the last month, though is still down 2.5% for 2019, after Prime Minister Boris Johnson got his wish for an election by year-end, which is now dangling before the market an opportunity to not only move forward in the Brexit process but also to see the spectre of a 'no deal' Brexit buried as prospect once and for all.

All that's necessary for that to become the status quo is for Johnson's Conservative Party to win a majority in the December 12 ballot.

A majority for the Conservatives is within reach and would for a time at least, neuter the opposition Labour Party and its socialist platform as well as the 'no deal' backing Brexit Party. But the electorate is divided to an unprecedented extent, especially over the Brexit, while failure by the Prime Minister in the looming poll would open up a can of worms for the Brexit process, the UK economy and its currency.

"We had expected more consolidation in the GBP and more near-term weakness perhaps before the rally resumed. Now, however, we have to think that a push through the upper 1.70 area will lift the cross to 1.73/1.74 initially and point to an eventual retest of the 1.78 level. Key support now is 1.6690/00. We are bullish above 1.7060," Hererra writes, in a research note this week.

Hererra's analysis takes account of only studies of trends and momentum on the charts, rather than goings on in Westminster, at the Bank of England (BoE) or in the economy. Scotiabank colleagues of Herrera, who do take their cues from fundamental factors, have said the Pound could well find istelf tracking movements in opinion polls over the coming days. 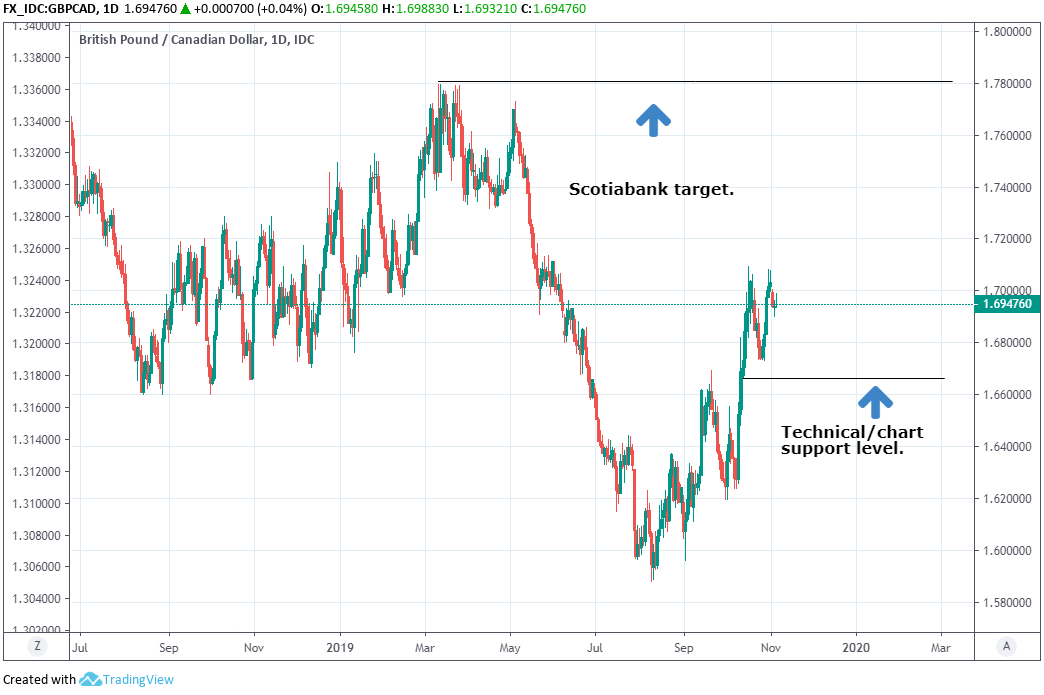 There's abnormally high uncertainty over the likely election outcome now the electoral field also contains the Brexit Party of eurosceptic stalwart Nigel Farage, which is being billed by many pollsters as more of a threat to the governing Conservative Party than it is to the opposition Labour Party. That analysis is not good news for the Pound, even if failure by Johnson does open the door for somebody to outright cancel, rather than dilute or otherwise diminish the extent of, the UK's exit from the EU.

If the polls are correct then Johnson could effectively win the popular vote but still lose the election, opening another door toward a different pathway for British politics, one leading to the "radical change" for "the many and not the few" that's being flogged by the Labour Party's openly Marxist leader Jeremy Corbyn.

A controversial figure in UK politics, Corbyn has made a career of opposing the free market economy, has a profligate attitude to the public finances and has indicated at times that he might also have a doubtful commitment to private property rights. A potentially toxic mix for a Pound Sterling that has already had one debilitating three-year-long dose of political upset, risk and uncertainty.

That, as well as a possible narrowing of the party polling gap, could mean the Pound spends much of the next four weeks in retreat from the Canadian Dollar and other rivals. Absent an increase in the current Conservative poll lead, which many firms put in the hight single digits, the Pound could at the very least remain sidelined until the vote is over in the same manner that it has been since next month's election was approved by parliament in late October.

It remains to be seen if the trend and momentum indicators on the Pound-to-Canadian-Dollar rate charts will still be pointing toward an extended rally once the dust settles after December 12.