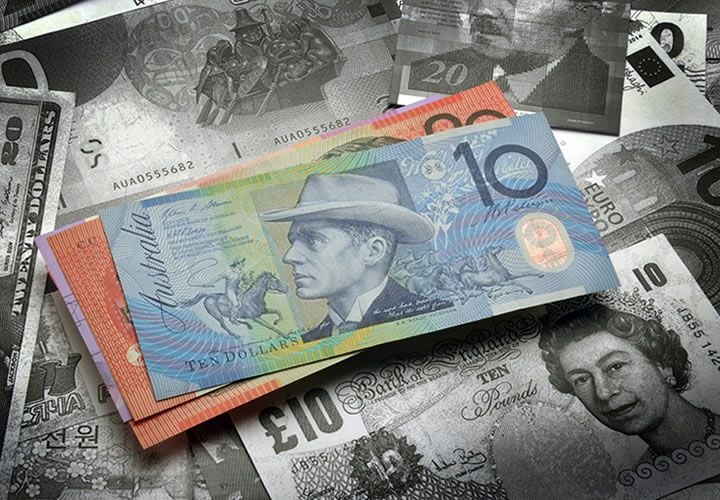 After a shaky start to the week, Pound Sterling has recovered versus the Australian Dollar.

Data showing wages in Australia are rising at a record low growth rate of 1.9% per annum were partly to blame as it weakened the Aussie.

This is below the annual inflation rate of 2.1%, indicating people are earning less allowing for inflation, which suggests economic growth could stall as people spend less.

It is unlikely higher-than-expected UK inflation data lifted the Pound, however, given equally lacklustre wage growth in the UK.

It is unlikely, therefore, to make the Bank of England (BOE) raise interest rates, a move which would strengthen the Pound.

From a technical perspective, the pair is finely balanced, but, we believe with a slight upwards bias (indicating more strength for the Pound).

The most recent activity shows an especially long hammer candlestick (circled) which is a very bullish indicator and a break above the 1.7500 level would, we think, provide confirmation of a continuation up to a target at 1.7600. 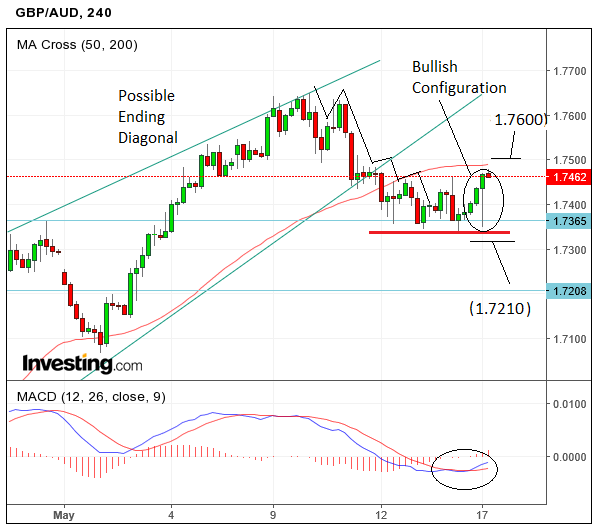 We do not discount the possibility of more downside, either.

The pair has broken out of what could possibly be a peaking pattern called an ‘ending diagonal’.

There is thus a chance of a the mini-downtrend which started on May 9 resuming.

We see the inflection point on the chart as the 1.7325 lows, with a break below these signalling a continuation down to a target at 1.7210, just above the 1.7208 support level at the level of previous key market action.

There was scant support for the Aussie on the most recent economic data with wages confirming tepid upside impetus.

In annual terms and not rounding the data, annual wage growth across all jobs dropped to a record low of 1.865%.

Looking ahead as far as data goes, the Australian employment report could be key on Thursday morning at 2.30, with an improvement potentially leading to a rise in the Aussie.

For Sterling, meanwhile, Retails Sales is released at 9.30 on Thursday. The report will be much in focus given current fears about a slowdown on the high-street limiting growth. The risk is that a negative result will undermine the Pound.

But the big driver for the Australian Dollar is likely to be global market conditions - the currency tends to benefit when stock markets and commodity prices are rising.

We saw some tailwinds provided to AUD earlier in the week as both commodities and stocks rose.

The current underperformance seen mid-week coincides with a broader stalemate seen across these asset classes.

"Risk aversion is tightening its grip on markets amid a sense that a deepening crisis may be descending on the White House following yesterday’s revelations suggesting that President Trump urged former FBI director Comey to drop an investigation into former NSA director Flynn. It is no stretch to say that speculation regarding the future of the presidency is rising. Investors are shunning stocks and favouring safe havens on the day so far," says Shaun Osborne at Scotiabank.

Should confidence soon return then the Aussie might be able to reassert itself.

Given the strength of Australia's trade dynamics its currency could be notably stronger, with analysts saying a failure to rise can be placed squarely on the Reserve Bank of Australia's doorstep.