The Australian Dollar is a sell in 2022 say strategists at Goldman Sachs in a "Top Trade Ideas for 2022" strategy note.

The Aussie is seen as being particularly vulnerable against the Canadian Dollar and Mexican Peso, against which the investment bank is looking to sell.

A sell recommendation on the Australian Dollar-Canadian Dollar exchange rate comes as the moves in relative short-term interest rates fades in importance, thereby placing a greater emphasis on other currency market drivers.

Specifically, Goldman Sachs are looking for commodity prices and their impact on an economy’s terms of trade to guide their FX trades.

"Our commodity strategists’ forecasts lean clearly in favor of the Canadian Dollar versus the Australian Dollar over the near term, primarily driven by our bullish oil view," says FX strategist Zach Pandl at Goldman Sachs.

Pandl says if commodity prices across the complex move according to their forecasts over the next three months their estimates imply a meaningful improvement on net in Canada’s terms of trade against a more marginal increase in Australia’s terms of trade.

The call comes off the back of a run of record trade surpluses recorded by Australia thanks to strong iron ore demand in 2021 as well as elevated coal and natural gas prices owing to a recent global energy crisis, lifting the Aussie Dollar's 'fair' valuation. 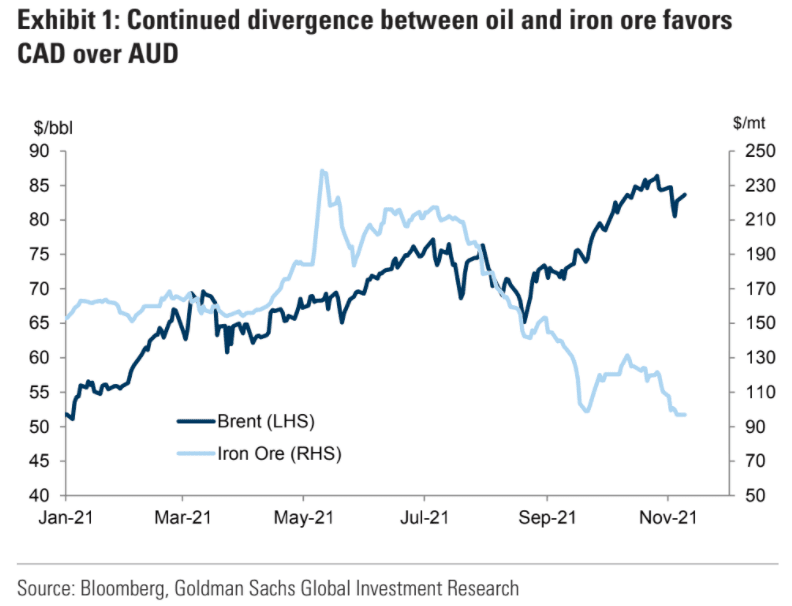 However, we note analysts as saying the top has been reached and the country's trade balance could now have peaked.

A slowdown in Chinese demand for iron ore as the once-hot property sector cools is seen as one reason why Australian exports of ore will fall back.

"AUD is also more exposed to metals prices and, relatedly, downside risks to China growth—which we expect to remain a key theme across markets as we enter 2022," says Pandl. 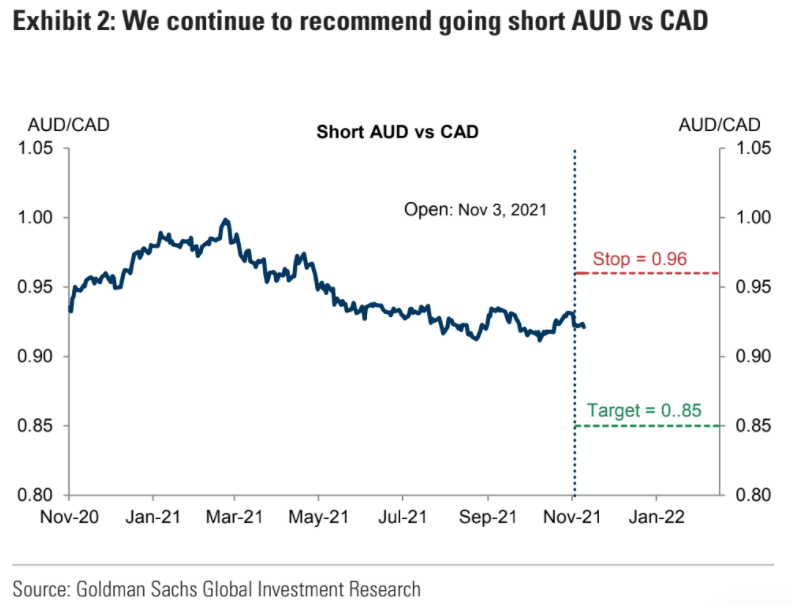 But monetary policy will also play a role in the Australian Dollar's expected underperformance against the Canadian Dollar and Peso.

"Our relative monetary policy expectations argue for further CAD strength. Our economists expect
the RBA to be much slower to raise rates than the BoC (and most other major G10 central banks), with the RBA probably on hold until 2023 and the BoC likely set to start raising rates in January 2022," says Pandl.

"The Mexican Peso features a high ‘beta’ overall; however, funding this cross from the risk-sensitive AUD keeps carry high, but lowers the beta of the overall expression to a variety of key shocks," says Goldman Sachs.