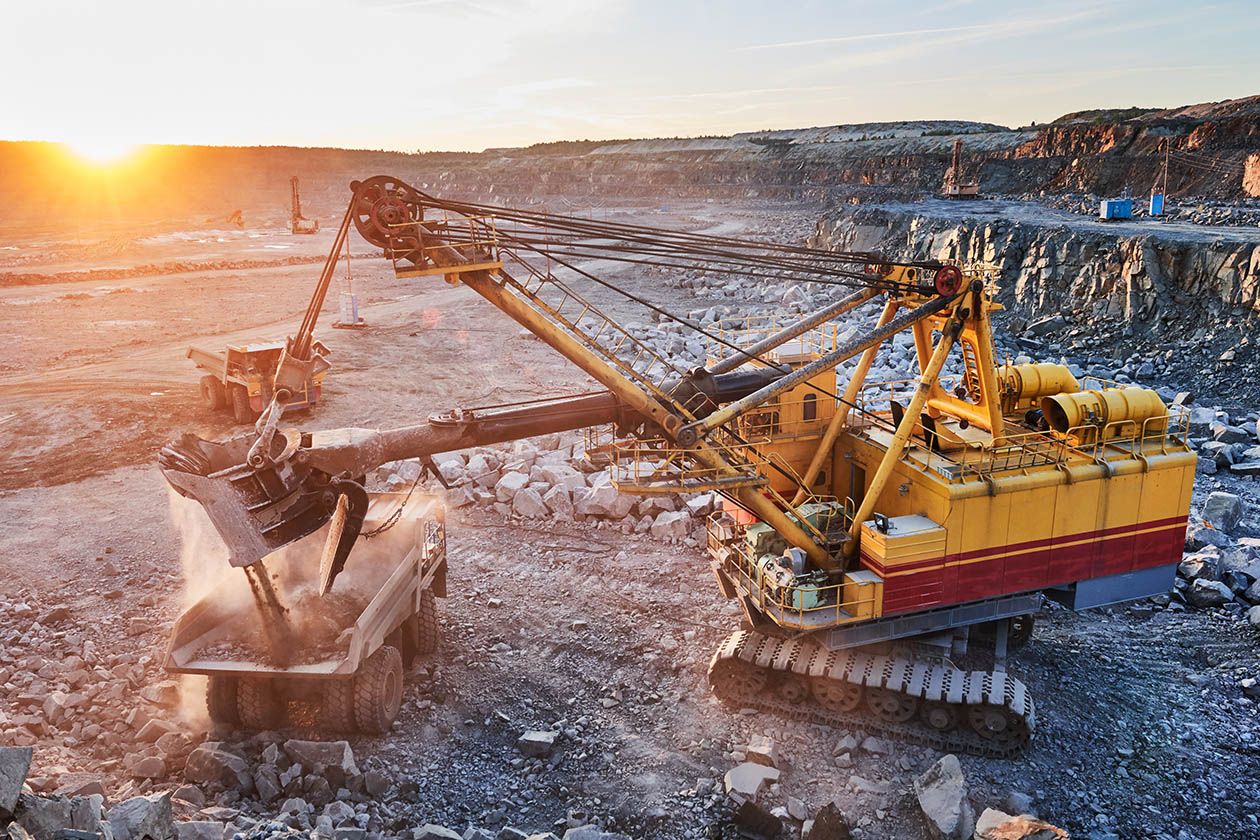 The Australian Dollar outlook will rely to a great extent on whether the country continues to print supportive trade dynamics, therefore what happens to oil, iron and natural gas prices going forward will matter.

Australia's export strength has been an enduring source of support for its currency: despite Covid lockdowns and a consistently 'dovish' central bank the Aussie Dollar has its strong trade dynamics to fall back on.

Australia printed another strong set of trade figures on November 04, but there are signs that the peak in the Trade Balance might now be in and this will likely push down on the Australian Dollar's 'fair value'.

"Despite the large fall, this is still an extremely strong surplus and is the third highest on record," says Adelaide Timbrell, Senior Economist at ANZ. 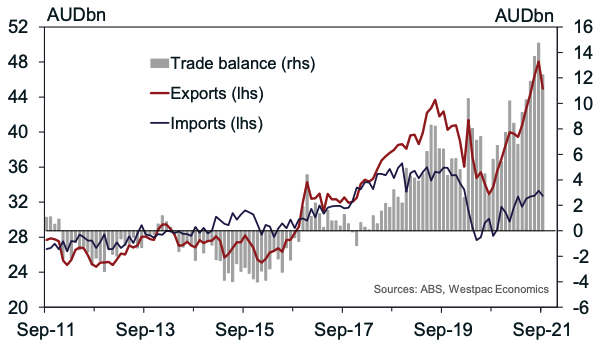 Above: "Trade surplus: down from August peak" - Westpac.

As expected coal and natural gas exports underpinned the strong export reading, but oil and coal prices have now come off their highs since September and concerns continue to grow over the outlook for Australia's iron ore export earnings.

The Australian Dollar outlook will rely to a great extent on whether the country continues to print supportive trade dynamics, therefore what happens to oil, iron and natural gas prices going forward will matter.

The below chart from Westpac shows how AUD/USD fair value has changed over recent years and how the exchange rate follows: 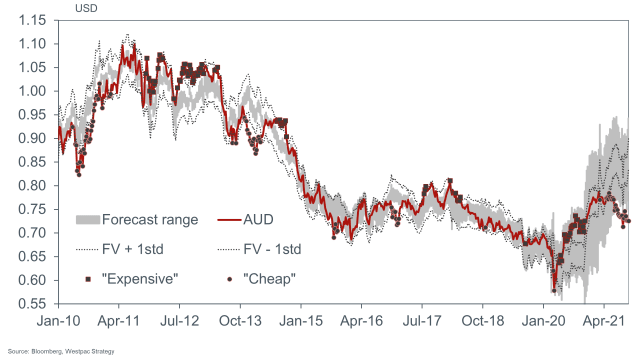 As can be seen in the above the Aussie's fair value is higher than spot at present, suggesting scope for upside.

But should that fair value come down the scope for upside necessarily eases.

The frenzied demand for coal and natural gas - Australia's number two and three exports - has ended, reflected in the price of Australia's benchmark Newcastle coal.

This coal contract has fallen back from an October 06 peak at $267/tonne to $152/tonne as strong demand in China and India eases as supply ramps up again following the recent shock: 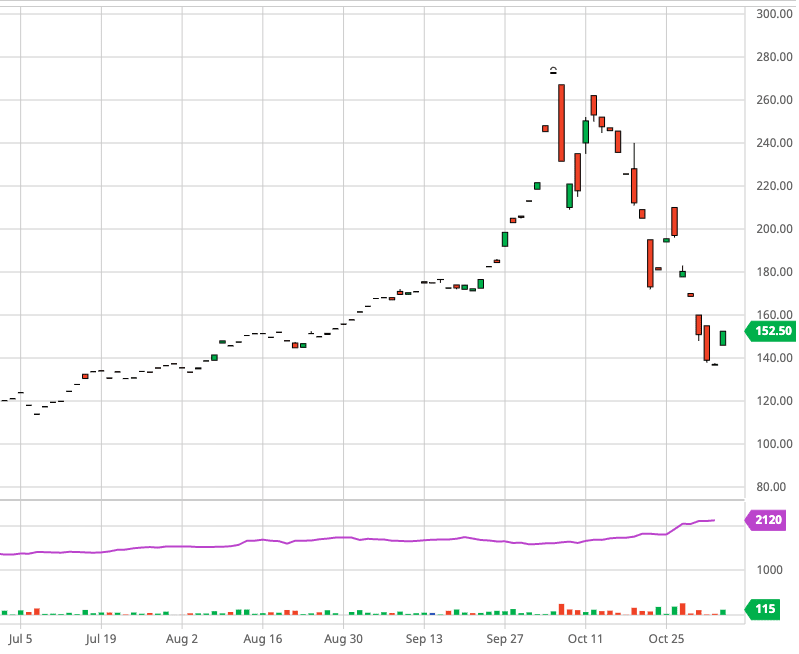 Above: The price change in Australia's Newcastle coal contract for December delivery.

Australia's number one export, iron ore, has meanwhile fallen into a downtrend amidst weakening steel production and an economic slowdown in China.

The price of iron has recently fallen back below $US100 a tonne having fallen by more than 20% over the past week according to Fastmarkets MB.

"The peak in the trade surplus has passed, now that the iron ore price bubble has burst," says Andrew Hanlan, Senior Economist at Westpac. 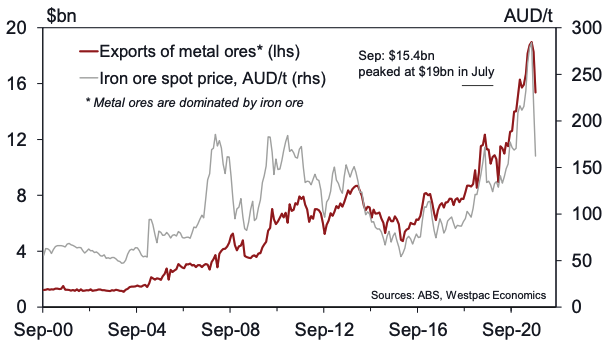 Above: "Metal ore exports and the iron ore price" - Westpac.

The main destination of Australia's iron ore remains China where an economic slowdown could well extend over coming weeks as authorities impose fresh Covid lockdowns and seek to curb pollution levels ahead of the Winter Olympics.

Economic growth in the world's second largest economy continues to slow amidst reports Chinese authorities are ring-fencing Beijing against growing Covid-19 outbreaks now permeating more than half the nation’s provinces, seeking to protect the capital as it gears up to host top political leaders next week and the Winter Olympics in less than 100 days.

Authorities are conscious that Evergrande - a mega developer - is symptomatic of imbalances in the property sector and are acting to curb excesses, this will involve slowing the supply of new developments to the market from overextended developers.

Chinese property developments fell 13.5% year-on-year in September alone and the production of cement fell 13% and steel output fell 14.8%, according to John Meyer, analyst at SP Angel.

The demand for steel for construction projects has sucked up Australia's iron ore over recent years, but it now looks like the top is in for the sector. 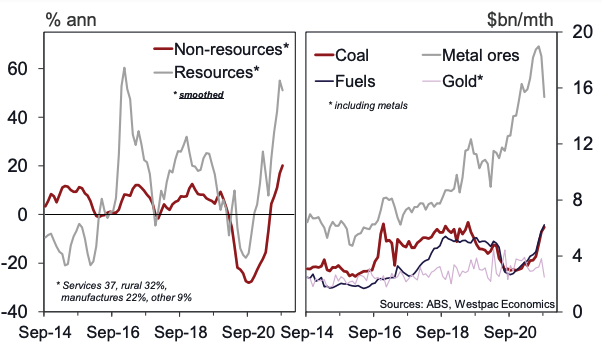 ANZ economists say they expect Australia's peak trade balance to have been reached in 2021 as declining commodity prices are expected to whittle the surplus down over the next year.

Furthermore, with domestic lockdowns easing ANZ's economists expect an increase in consumption imports over the coming months, which will increase imports.

Should Australia's terms of trade moderate then the Australian Dollar's fair value level stops rising and could start to fall.

This leaves the currency exposed to further dovishness from the RBA which remains resolute in its desire to keep interest rates unchanged through 2022.

But, the easing of the Covid crisis in Australia and the resumption of domestic consumption should offer some offset to a retracement in export earnings.