Foreign exchange strategists at Credit Suisse say they continue to expect the British Pound to advance against the Australian Dollar following this week's message from RBA governor Philip Lowe and a broader desire to reduce exposure to Asia.

In a regular currency research briefing the Swiss investment bank says the Reserve Bank of Australia (RBA) looks set on keeping its basic interest rate at 0.10% for a protracted period, while the Bank of England is likely to raise rates much sooner.

Accordingly, researchers say the divergence provides a compelling narrative to bet on advances in the Pound-to-Australian Dollar exchange rate (GBP/AUD).

Credit Suisse earlier in 2021 recommended being 'long' GBP/AUD "as a play on the UK economy becoming 'post-Delta' and opening with some aggression," says Shahab Jalinoos, Global Head of FX Strategy at Credit Suisse.

He says this lends itself to a Bank of England "hawkish tilt"; a call that comes just days ahead of the Bank's September 23 policy update.

The Bank is not expected to raise interest rates but any message that reaffirms the market's current expectation for a H1 2022 interest rate rise could underpin the Pound.

This contrasts notably to the RBA where Governor Philip Lowe this week gave an unambiguous message to markets, stating that he did not agree with their expectations that interest rates will rise in 2022.

"I find it difficult to understand why rate rises are being priced in next year or early 2023," said Lowe. 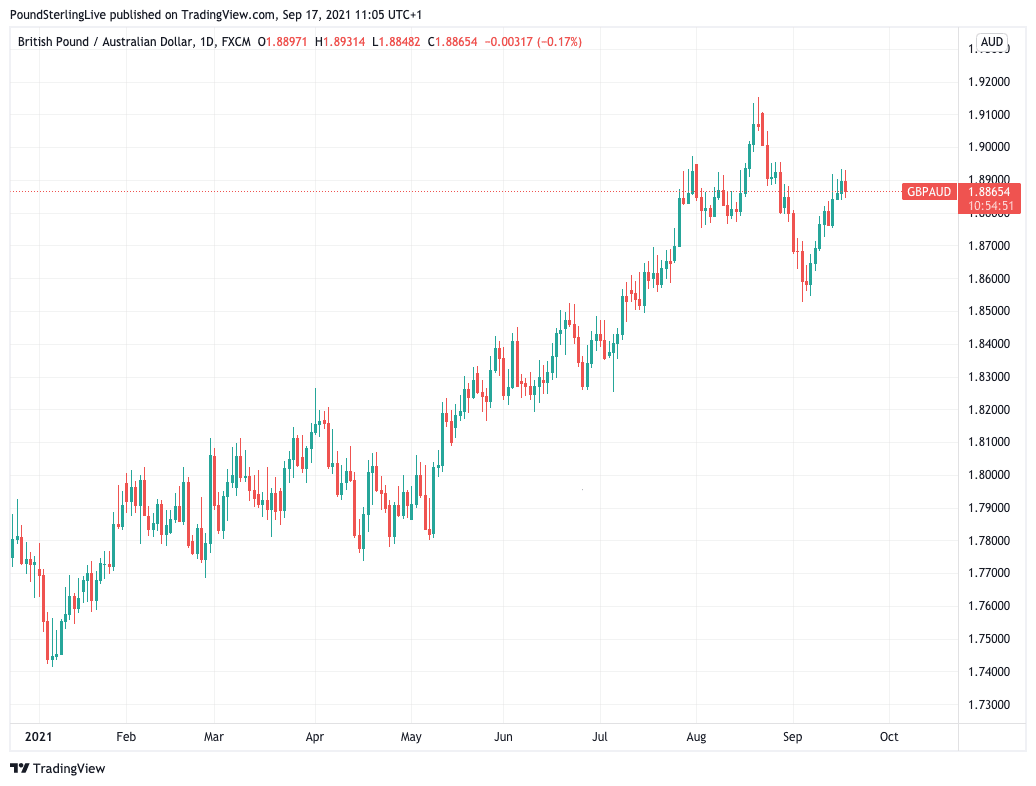 Above: The 2021 trend in GBP/AUD has been pointed higher.

Lowe said wage growth would be required to reach 3.0% on a sustained basis before rate hikes could be entertained, and given the Covid-19 setback faced by the country this remained a far-off prospect.

But for Credit Suisse, reasons to be wary of the Australian Dollar have more than just domestic roots as the FX strategy team are keen to maintain a distance from Asian assets in general.

Jalinoos says "staying away from AUD has been a key G10 part of our 'Pivot from Asia' message we’ve had since the summer."

Asian economic growth has stumbled over recent weeks as the Delta variant of Covid takes hold of a region left relatively untroubled by the disease until now.

Harsh containment measures have meant economic growth has fallen, with slowing Chinese growth proving to be of particular concern for investors.

For Australia any slowdown in China matters given it is the primary market for Australian exports, particularly the all-important foreign currency earner that is iron ore.

A slew of negative economic statistics out of China midweek reinforced a narrative of slowing growth in the world's second largest economy which serves as Australia's prime export market.

Retail Sales fell 2.5% in the year to August, a substantial slowdown on the 8.5% recorded in July and well below analyst expectations for a reading of 7.0%.

Industrial production meanwhile slipped to 5.3% in the year to August from 6.4% in the year to July, presenting investors another miss on expectations for a reading of 5.8%.

"The COVID-19 Delta variant hit multiple provinces in China over the course of about a month during July-August, triggering stringent containment measures and causing significant disruptions to economic activity, especially in the services sector," says Hunter Chan, Economist, Greater China at Standard Chartered.