The Australian Dollar was an outperformer among major currencies in the mid-week session as it neared fortnight highs against a faltering greenback in the latest sign that AUD/USD may already have reached its nadir, which is placing the Pound-to-Australian Dollar exchange rate under pressure.

Australia’s Dollar rose against all counterparts in the G10 contingent of major currencies on Wednesday as the U.S. Dollar slipped lower across the board and the market digested better-than-expected second quarter GDP data from down under.

The Aussie economy grew by 0.7% last quarter, faster than the 0.5% anticipated by economists, in an outturn that could only encourage the Reserve Bank of Australia (RBA) in its view that the economy would be quick to recover from the latest ‘lockdown’ once restrictions on activity are eased.

AUD/USD rose decisively above an important technical resistance level at 0.7318 in the wake of the data on Wednesday, continuing a recovery that had been set in motion last Friday following an address by Federal Reserve (Fed) Chairman Jerome Powell at the Jackson Hole Symposium of central bankers, in price action that will have rewarded Westpac’s algorithmic model for having bought the Aussie at the opening of the week.

“The model dumps its USD long and opens a modest short for the week ahead,” says Richard Franulovich, head of FX strategy at Westpac, in a Monday research note. “The stabilisation in risk appetite gauges also encourages the model to open a small AUD long. The overweight CAD long has been trimmed right back, the model instead tipping all its eggs into NOK after the Norges Bank signalled the prospect of rate hikes in September.” 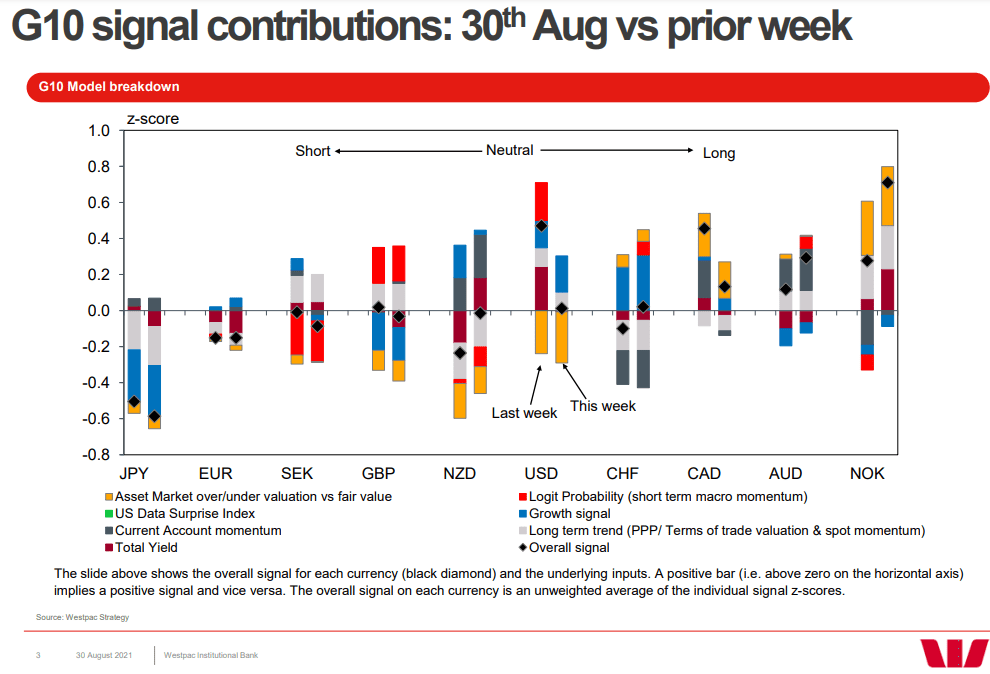 Price action in AUD/USD has since put the Pound-Aussie rate under pressure, pushing Sterling to its lowest level since July 26 when testing the 1.87 handle on Wednesday, although there’s a risk of further declines as far as roughly the 1.8640 level over the coming days.

Still however, many in the market retain a cautious view on the Australian Dollar outlook and this could be likely to remain the case until at least the other side of next Tuesday’s RBA monetary policy decision, which some suspect could see the bank scrapping its earlier plan to reduce the amount of Australian government bonds bought by its quantitative easing programme each week from from A$5BN to A$4BN.

“The data was of minimal use to financial markets given the economy looks very different now. Regular readers will know we are now very bearish about the Australian economy in the next several months. We also expect a softer bounce back than in 2020 once restrictions are eased,” says Kim Mundy, a currency strategist at Commonwealth Bank of Australia.

“We forecast GDP to contract by 4.5%/qtr in Q3 21. Consequently, we expect the RBA will delay tapering asset purchases at its policy meeting next week,” Mundy writes in a Wednesday note.

The RBA had surprised the market when leaving the above-referenced plans intact in its August decision although minutes of the meeting later revealed that policymakers would be willing to scrap the idea if the challenges faced by Australia’s economy mounted in the interim and posed as a more severe threat to the bank’s medium-term growth outlook.

Since then more than half of Australia’s economy and population have been on the receiving end of prolonged ‘lockdown’ measures as the country seeks to curb its latest and largest to date coronavirus outbreak, measures that could remain in place throughout September if not well into the Autumn, meaning that if the RBA is ever to abandon its tapering plan it might be most likely to do so next Tuesday. 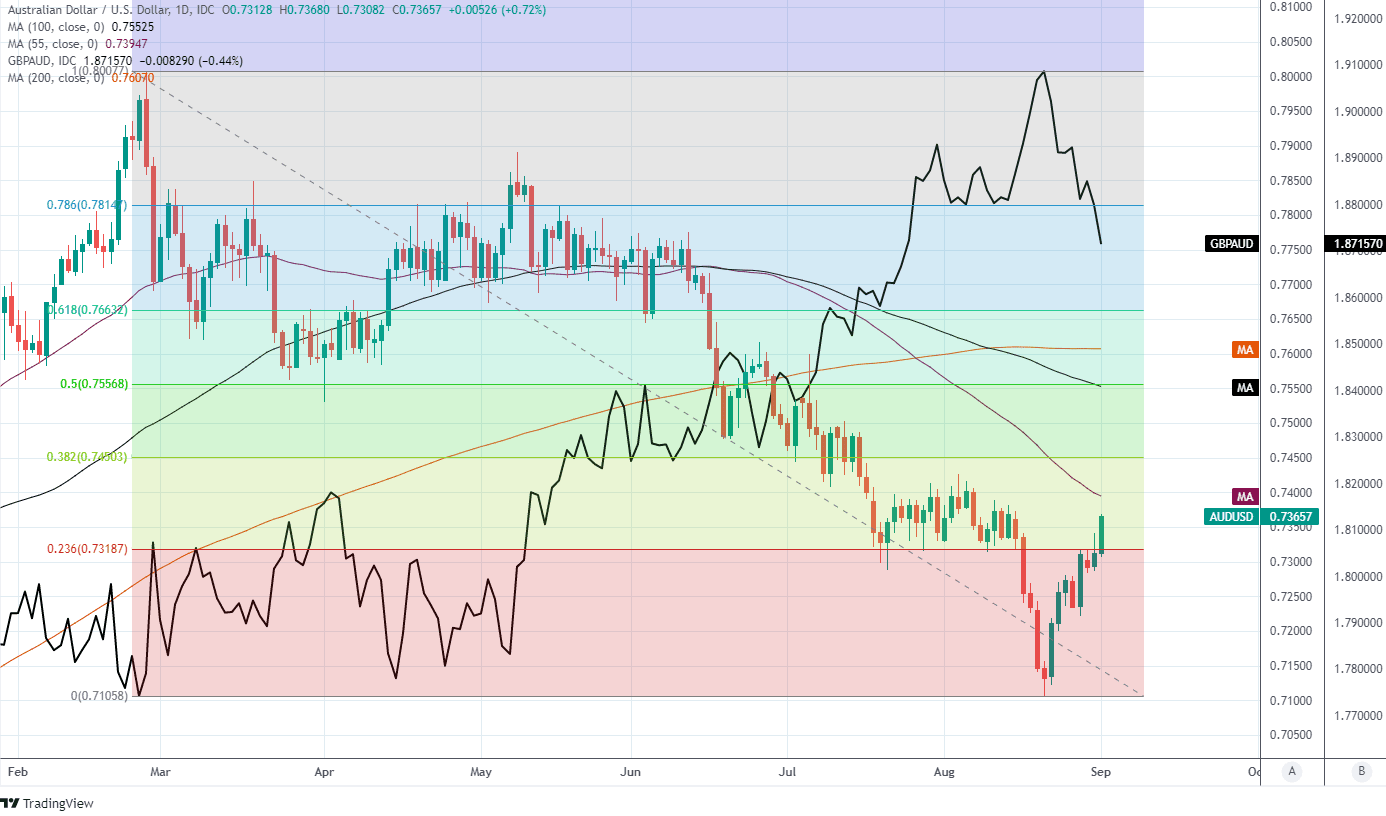 However, and on the opposite side of the same coin, if the RBA was to eschew the opportunity of scrapping the QE taper for a second time next week it could potentially put additional wind into the Australian Dollar’s sails and further cultivate the impression in the market that a bottom has effectively already been seen in the main Australian exchange rate AUD/USD.

This could be likely to keep pressure on the Pound-to-Australian Dollar rate, which always closely reflects the relative performance of AUD/USD and the main Sterling pair GBP/USD, in turn fostering the appearance of a top having been formed for Sterling.

“AUD/USD recently eroded its accelerated downtrend and should see further follow through on the topside. Above the market lies the .7327 4th August high and the 55-day ma at .7395 and this guards the .7496 3 month resistance line,” says Karen Jones, head of technical analysis for currencies, commodities and bonds at Commerzbank.

Jones and the Commerzbank team are buyers of AUD/USD from 0.7285 but have warned that the exchange rate could encounter difficulty around roughly the 0.7395 area, which is the location of the Aussie’s 55-day moving-average and a likely site of technical resistance to the recovery.

The Pound-to-Australian Dollar rate would be found trading around 1.8640 if AUD/USD tested 0.74 and in the meantime, the main Sterling exchange rate GBP/USD proved unable to recover above its nearby 1.38 level, which is the location of the Pound’s 200-day average against the greenback. 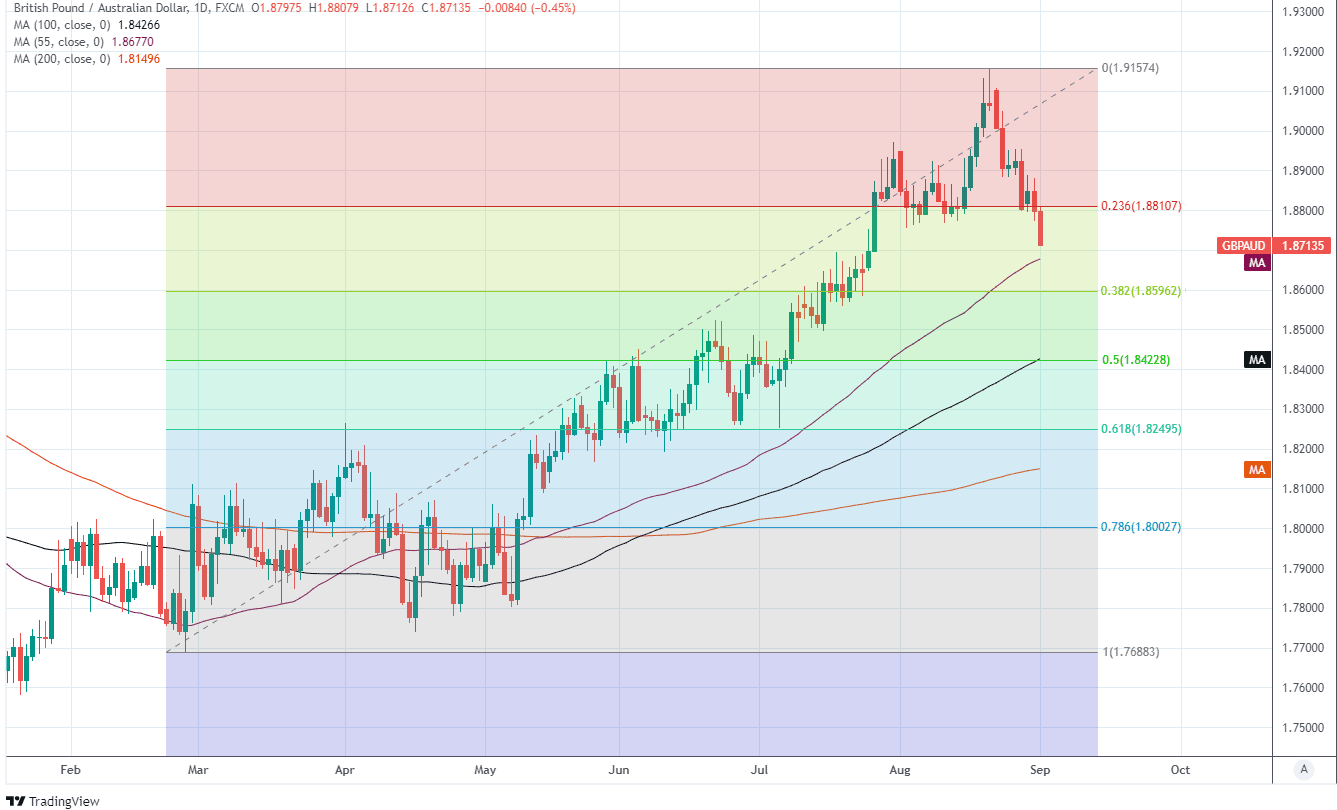