The Australian Dollar was seen outperforming peers following the release of some stronger-than-expected Chinese data, confirmation that developments in the world's number 2 economy remain an important driver of moves in the currency.

China's imports grew 36.7% year-on-year in June which is higher than the consensus expectation for a reading of 29.5%.

The Australian Dollar rose against the U.S. Dollar and reached a high of 0.7503, although the pair retains a heavy feel on the daily charts.

The Pound-to-Australian Dollar exchange rate (GBP/AUD) had tested a fresh one-year high over the previous 24 hours at 1.86, amidst signs that the Sydney lockdown will be extended and growing concerns over the Chinese economy.

The rise in the Aussie Dollar following Tuesday's trade data takes the GBP/AUD lower to 1.8533 at the time of publication.

Nevertheless, the trend in GBP/AUD remains higher according to the daily chart. 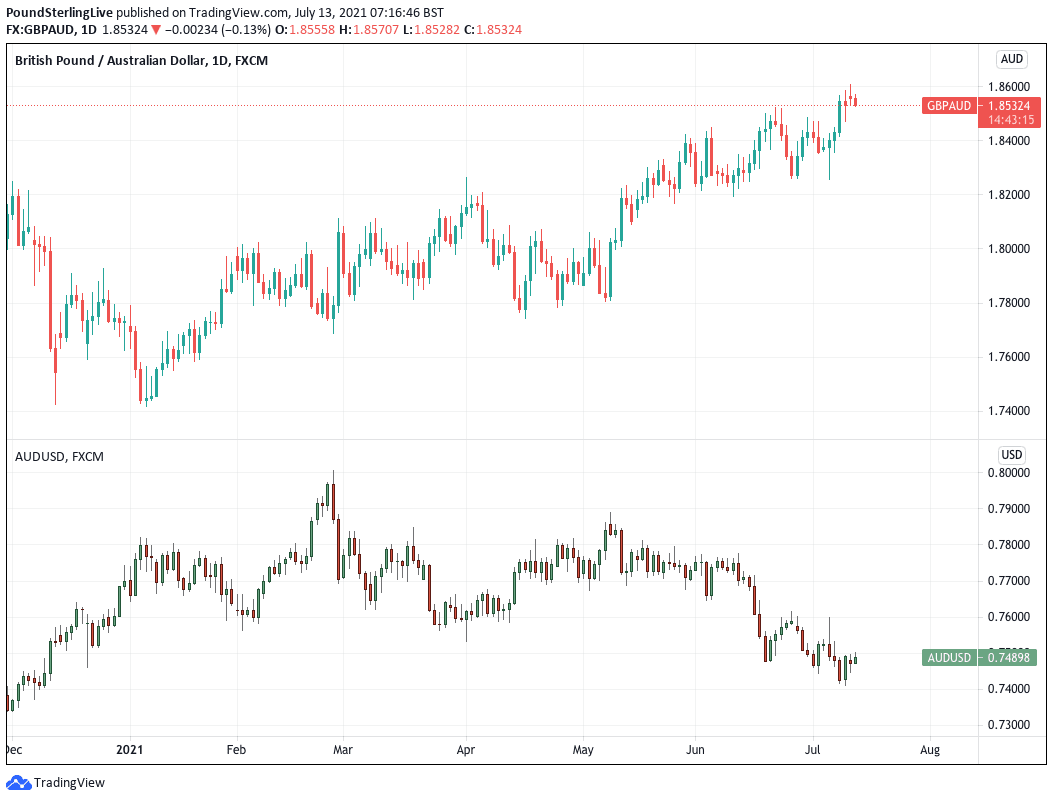 Chinese growth concerns have been growing of late thanks to a slew of disappointing data releases which have culminated in the People's Bank of China (PBoC) last week announcing fresh stimulus in the form of a Reserve Requirement Ratio (RRR) cut.

The better-than-expected Chinese data out Tuesday can therefore go some way in quelling growth fears and assist Chinese proxy assets such as the Aussie Dollar.

"Some slowdown was expected after May’s 51.1% rise, and the 2020 comps are getting tougher, but it reduced fears of a demand slowdown in China, particularly given lower whisper numbers post Friday’s RRR cut," says Lignos.

The trade data is important in the context of Australian exports as China is the largest market for iron ore, coal, LNG and gold; all of which underpin Australian Dollar valuation.

"Slowing growth from China which could impact commodity demand may also weigh on the currency," says Paul Mackel, Global Head of FX Research at HSBC.

Chinese exports meanwhile rose 32.2%, which was ahead of the 23.1% the market was expecting.

"There was also a surge in exports, despite a pick-up in COVID cases in southern China that had caused delays in shipments at some major ports for much of June," says Lignos.

Still to come this week are China’s GDP numbers for the second quarter due mid-week.

"It seems the picture being painted by official data is ‘move on, nothing to see’. Whether or not that’s a fully fair representation of reality, it is helping support risk appetite on the day," says Lignos

But domestic developments were less supportive for the Australian Dollar as June NAB business conditions and confidence fell sharply.

"The June survey was conducted through the period of rising cases in NSW and the early part of the subsequent lockdowns both there and in other states. Unsurprisingly, business confidence has taken a hit. This was particularly evident in NSW and Qld but confidence was generally softer elsewhere," says Alan Oster, Group Chief Economist at NAB.

Business confidence fell to +11 from +20 which was however still not far from an historic high.

Conditions were down to +24 from 36, which still remains a relatively elevated reading.

"Confidence is likely to weaken further and stay subdued given risk of further lockdowns until vaccination rates are materially higher. That will temper any recovery in activity," says Lignos.

The call came as the Australian government made available a relief package that would include payments for people locked down in New South Wales.

The government will allow people who have lost more than 20 hours’ work will be able to access a payment of A$352.

The measures will ultimately mitigate the negative economic consequences of the lockdown and should allow for a stronger rebound as accumulated savings are put into action.