The Pound-to-Australian Dollar exchange rate (GBP/AUD) has tested a fresh one-year high at the start of a new week, amidst signs that the Sydney lockdown will be extended and growing concerns over the Chinese economy.

GBP/AUD reached 1.8610 on July 12, its highest level since May 2020, courtesy of ongoing anxieties over Chinese economic growth which is a key focus for global markets at present and has potentially negative implications for Australian exporters.

Chinese growth concerns were underpinned on July 09 when the People's Bank of China (PBoC) announced fresh stimulus in the form of a Reserve Requirement Ratio (RRR) cut.

The move is expected to result in around 1 trillion yuan ($154.19BN) being released into the economy.

While central bank stimulus is often regarded as supportive by investors, there are concerns that problems in China's banking sector might be brewing.

"My own view is that the main intention of this cut is to help banks with their capital and liquidity requirements," says Iris Pang, Chief Economist, Greater China at ING.

"This gives me a sense of unease. Are banks under stress? If this is the case, it implies there could be more bad loans," adds Pang.

The Australian Dollar is sensitive to developments in the Chinese economy and is often utilised by investors as a Chinese proxy owing to its ample liquidity.

China is Australia's primary export market and a slowdown in demand will therefore reduce Australia's foreign exchange earnings, at a time when the domestic economy is being burdened by Covid lockdowns. 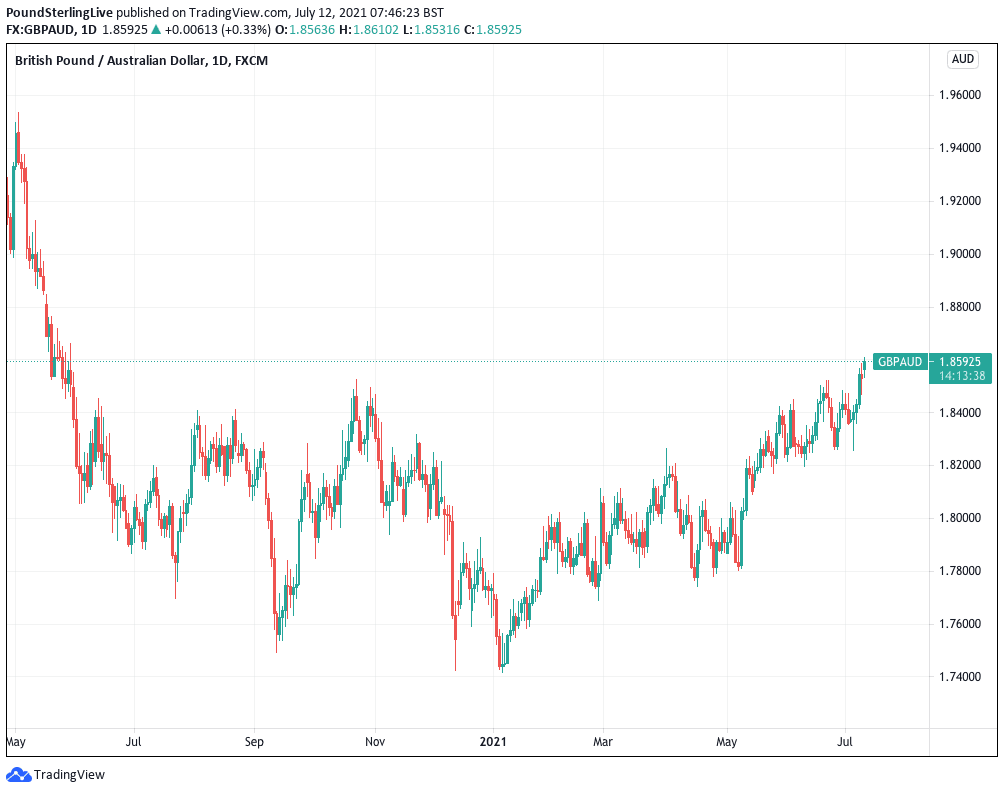 "This RRR cut is not a positive signal. Volatility in the market could well increase," says Pang.

The recent move higher in GBP/AUD comes days after Pound Sterling Live reported one of Australia's major lenders predict the Australian Dollar would remain a laggard, which is seen helping GBP/AUD to eventually sustain its recent move above 1.85.

With China proving a source of anxiety for the Aussie Dollar, this week's release of Chinese GDP data will attract interest when released on Thursday at 03:00 BST.

The market is looking for a reading of 8.1% year-on-year in the second quarter, a strong beat could assist the Australian Dollar but a miss could weigh.

"Chinese GDP growth for 2Q21 will likely affect the currencies of countries that are more economically exposed to Beijing, such as the AUD," says Roberto Mialich, FX Strategist with UniCredit Bank.

Growth in the services sector fell to a 14-month low in June, weighed down by a resurgence of Covid-19 cases in southern China, according to the monthly Caixin PMI report.

Consequently, Barclays believe that the PBoC will try to stimulate the economy and will deliver another 50bp cut to their RRR in the fourth quarter of 2021. 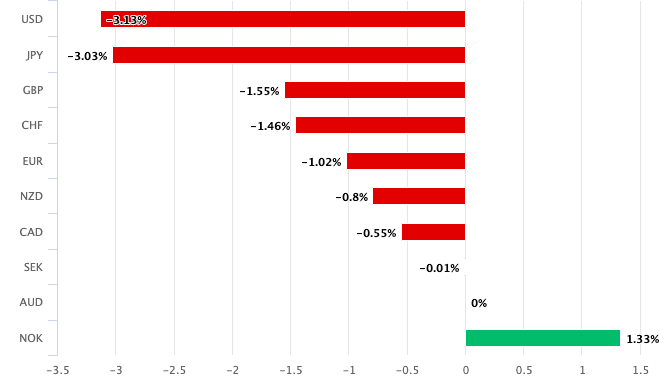 Above: AUD performance over the past month.

The above chart reflects the sensitivity of the Australian Dollar to global growth concerns: the currency has lost value to all its major peers, apart from the Norwegian Krone, over the course of the past month.

The Krone is itself a currency that is sensitive to global risk trends as Norway is another major commodity producer (oil).

That losses are greatest against the traditional safe-havens of the Yen, Franc and Dollar also serve to confirm global risks trends to be in control of the foreign exchange market.

Therefore, for the Australian Dollar to make advances a rebound in investor optimism - preferably centred around China - might be required.

But domestic developments are also proving unhelpful to the Aussie Dollar's outlook.

Reports out at the start of the week suggest the prospect of an extended lockdown in Australia's commercial hub of Sydney looms, as Australian health officials report yet another record daily rise in Covid-19 cases for the year.

Case numbers have been at record levels for at least three days.

State Premier Gladys Berejiklian said the progress of that figure in coming days would determine whether Sydney's lockdown, due to end on Friday, would be extended.

"While the economy tends to recover very quickly from short lockdowns, an extended lockdown of Greater Sydney and other parts of NSW has more potential to negatively impact business and consumer confidence," says Jarek Kowcza, Senior Economist at St. George Bank in Sydney.

St. George Bank estimates the cost the initial two-week lockdown to be around A$750MN per week, although it could be as high as A$1BN a week.

"As the lockdown is extended and negatively impacts more businesses and households, the economic impacts may become larger," says Kowcza.

Looking at the domestic agenda for the week ahead, June labour force data due out on Thursday forms the highlight.

"We will get a read on how consumer sentiment has been affected by the latest round of lockdowns," says Kowcza.

The market expects 30K jobs to have been created in June, down from May's 115.2K.

The unemployment rate is expected to have fallen to 5.0% from 5.1% previously.

Any disappointment in this headline figure would likely weigh on the Australian Dollar.

Consumer sentiment data for July to be released on Wednesday.

Business confidence and conditions numbers for June, prior to the latest round of lockdowns, will also be released on Tuesday.