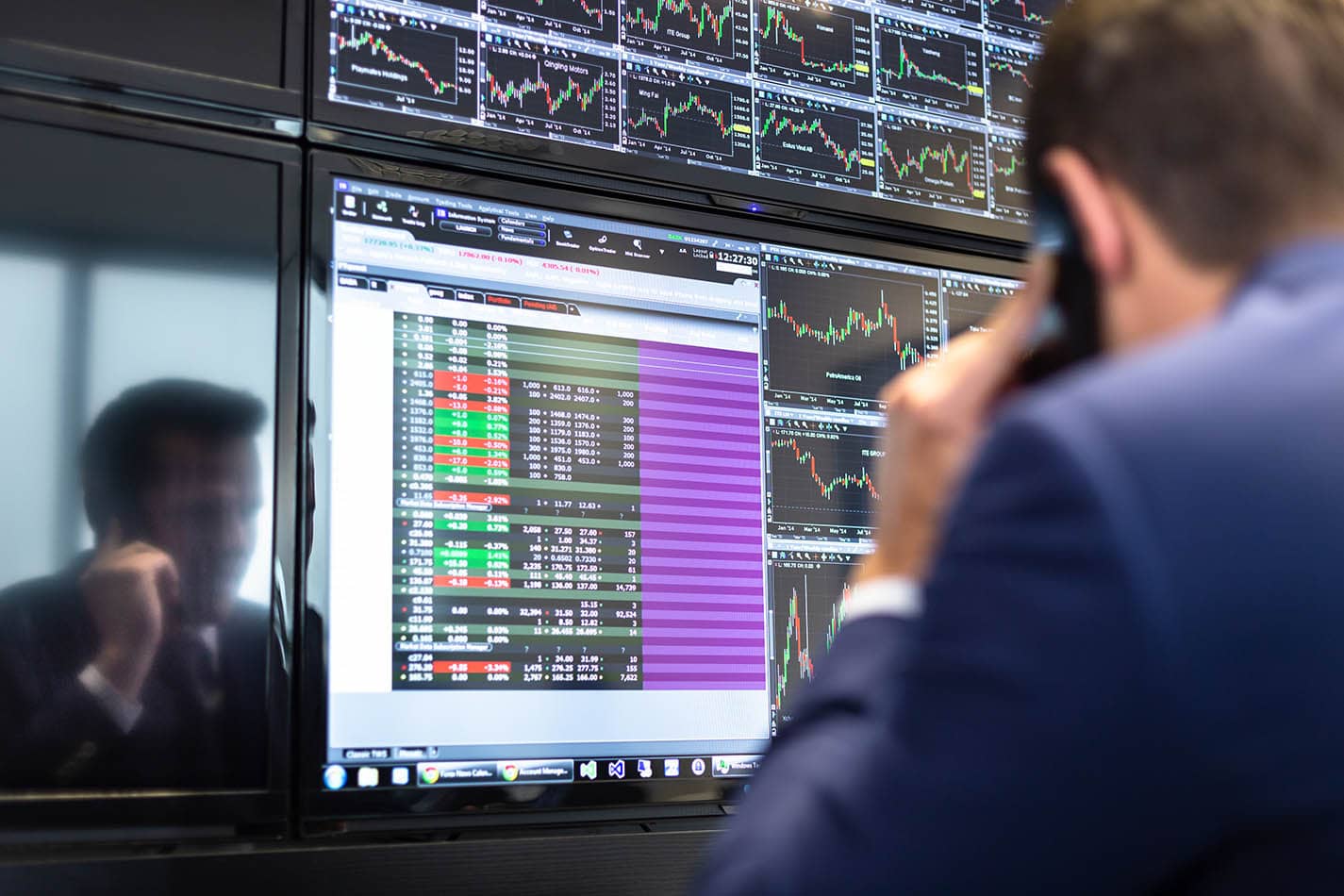 The Australian Dollar could remain a laggard among major currencies in the coming months, according to newly downgraded forecasts from Commonwealth Bank of Australia, in a performance that is seen helping GBP/AUD to eventually sustain its recent move above 1.85.

Australia’s Dollar remained among the worst performing major currencies of 2021 in the final session of the week having slipped through the rankings earlier in the year and been unable to capitalise this week on a slight shift in policy stance at the Reserve Bank of Australia (RBA).

The RBA said it would reduce the amount of Aussie government bonds bought each week over the coming months, under its maiden quantitative easing programme, from A$5bn to A$4bn and indicated that it might be willing to entertain the idea of an interest rate rise in 2024 if-not before.

It hadn’t been expected to reduce the pace of the bond purchases quite so soon but with financial markets wagering before July’s meeting of policymakers that the RBA could lift its 0.10% cash rate as soon as late next year, the Australian Dollar drew little benefit from the new guidance.

“We have materially cut our year-end AUD/USD forecast by 9 US cents. The main reason for cutting our forecasts is the stronger USD. In addition, the RBA has been more dovish about monetary policy than we expected,” says Carol Kong, a strategist at Commonwealth Bank of Australia.

“We expect AUD/GBP to drift lower over the coming quarters,” Kong says. 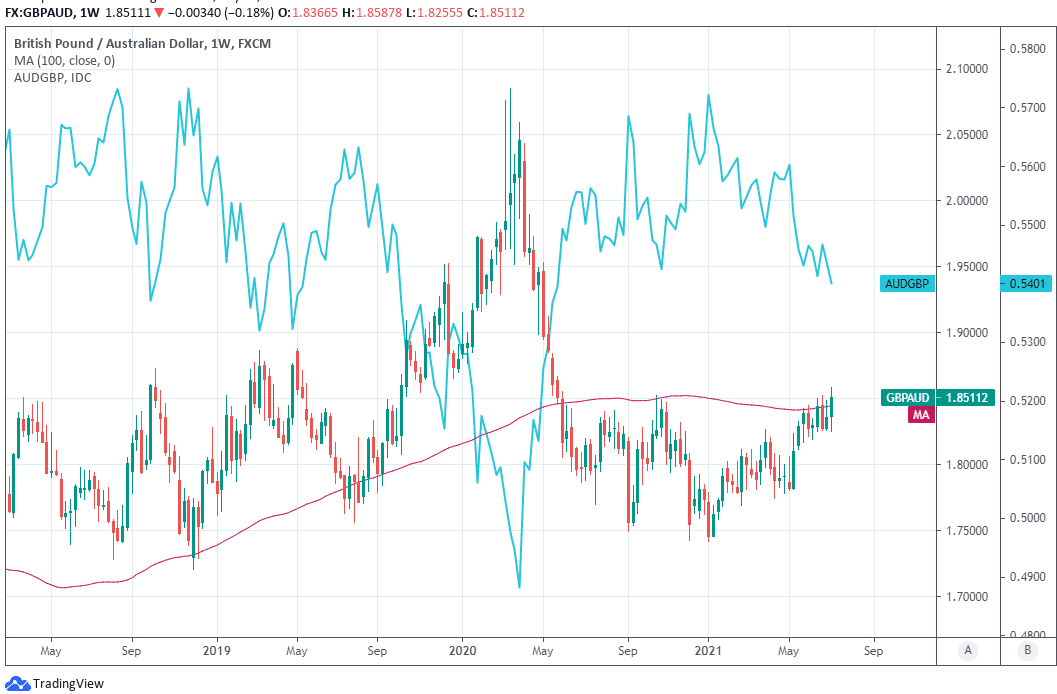 Above: Pound-to-Australian Dollar rate shown at weekly intervals alongside AUD/GBP.

Despite this week’s adaptation, the RBA is still expected to continue buying Australian government bonds under its quantitative easing programme for at least the remainder of 2021, and for longer than other central banks including the Bank of England (BoE) and Federal Reserve (Fed) among others.

That, along with the RBA’s insistence that it will likely be 2024 or later before the bank lifts its cash rate, is a potential headwind that CBA says will keep the Australian Dollar on its back foot against many other currencies including the Pound.

“The RBA’s dovish stance, relative to the BoE), is a near-term weight on AUD/GBP. For example, we expect the BoE will end its asset purchase programme in November. At the same time, the UK’s rapid vaccination drive and broad economic re-opening is also a near-term weight,” Kong says. “We now forecast AUD/GBP to fall to 0.5373 [GBP/AUD: 1.8751} by the end of March-2022.”

The RBA said this week that it wants to see inflation lifted so that it sits sustainably within the 2%-to-3% target band before raising interest rates, which could take years yet if the bank’s experience of the last decade is anything to go by, a period in which inflation has remained beneath the target.

Persistent below-target inflation already had the RBA cutting interest rates before the pandemic, in the hope of raising economic activity sufficiently to lift price pressures. 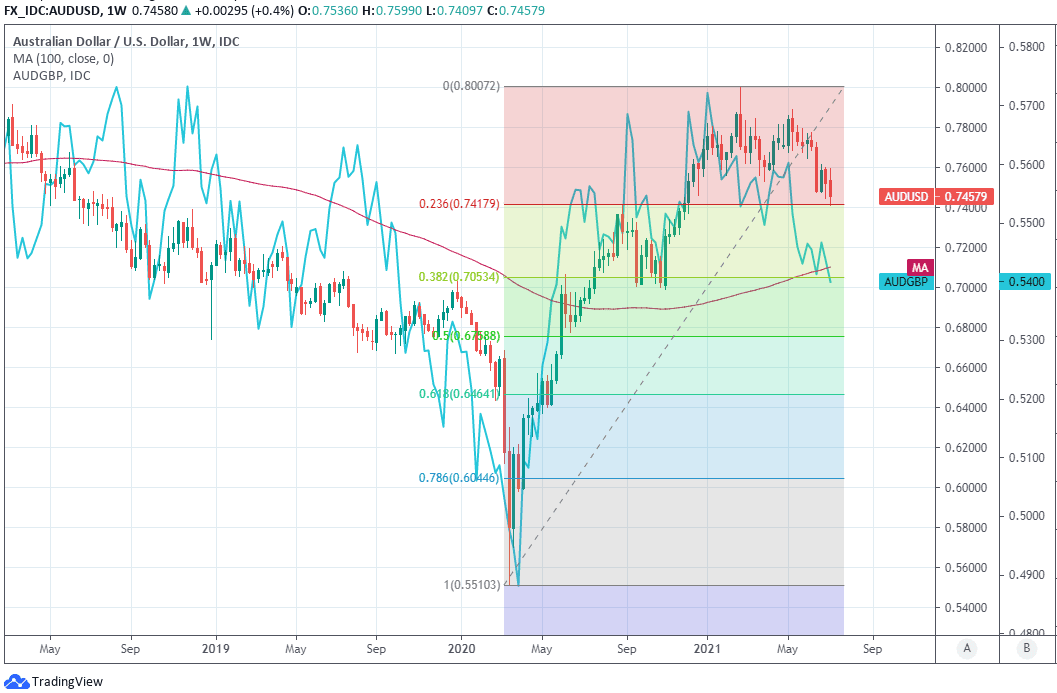 Above: AUD/USD rate shown at weekly intervals alongside AUD/GBP.

“The RBA does not expect to raise the cash rate until 2024 while the median fed funds rate projections (dot plot) imply 50bps rate hikes by end of 2023,” says Elias Haddad, a CBA colleague of Kong.

“Our central scenario remains that the RBA will commence normalising the cash rate in November 2022. Still, AUD will stay under downside pressure until Australia’s inflation backdrop improves in favour of our RBA cash rate view,” Haddad says.

CBA downgraded its Australian Dollar forecasts following this week’s RBA announcement, citing the recent shift in stance at the Federal Reserve as well as other central banks, and now looks for the Pound-to-Australian Dollar rate to trade around or above 1.85 {AUD/GBP: 0.54} through the rest of 2021.

Changes to GBP/AUD forecasts were limited in comparison to those announced for the main Australian Dollar exchange rate AUD/USD.

AUD/USD is now forecast to fall back from 0.75 on Friday to 0.74 by the end of September and 0.72 by year-end, the latter of which is a large downgrade from an earlier projection of 0.81.

That implies almost a five percent decline from Friday’s levels before the curtain closes on 2021.

Above: Commonwealth Bank of Australia forecasts for selected exchange rates.