The British Pound last week recorded its strongest advance against the Australian Dollar since January after it appreciated 2.4%, and momentum studies suggest further gains are possible as the market takes on an increasingly bullish feel

The Pound-to-Australian Dollar exchange rate starts the new week 0.20% higher at 1.8197 as gains extend amidst a broad-based rally by Sterling, largely built on a growing view that the EU and UK are ultimately poised to secure a trade deal before year-end.

Last week saw Sterling turn higher amidst numerous newswire and newspaper reports that suggested the atmosphere in trade negotiations had improved, and both sides are confident a deal will be reached.

Tuesday sees the ninth and final round of negotiations commence and reports out Monday say if enough progress is made negotiators will enter an intense "tunnel period" where the final details of the most pressing issues are thrashed out ahead of a mid-October EU summit.

The impetus in Sterling is reflected in a GBP/AUD exchange rate that has seen momentum flip from negative to positive, with the exchange rate bouncing back from a multi-month low at 1.7494 which was recorded mid-month.

The Relative Strength Index (RSI) - which is used to determine the strength of momentum and can be seen in the lower pane in the below - sits at 60.77 which places it firmly in positive territory and advocates for further gains. 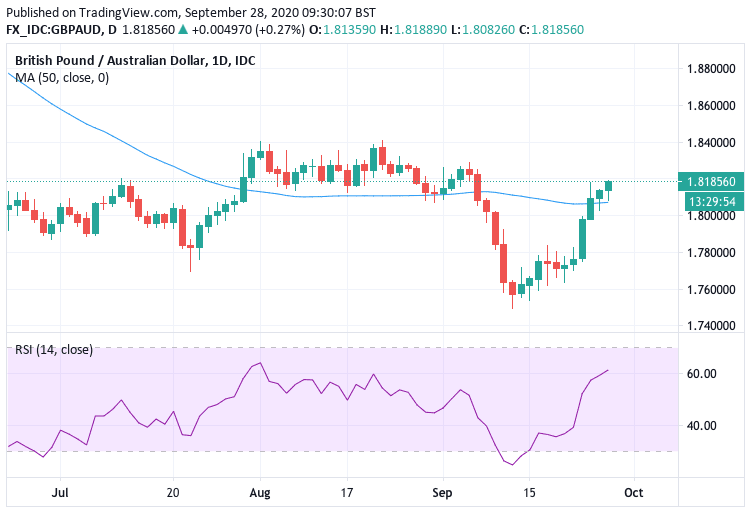 Furthermore, the exchange rate broke above its 50 day moving average on Thursday last week (blue line above) which some technical advocates say is a precursor to further gains over coming days.

The improved fundamental picture underpinning Sterling meanwhile coincides with a deterioration in sentiment towards the Aussie Dollar largely built on shifting expectations over future Reserve Bank of Australia (RBA) policy.

"AUD is the worst-hit currency outside Europe... a key factor moving on for AUD, which could once again trigger some underperformance vs its main peers, is the rising market expectation around more RBA stimulus," says Francesco Pesole, FX Strategist at ING.

Last week saw the RBA's Deputy Governor Guy Debelle hint that policy makers were inclined at offering further monetary support to the Australian economy, going so far as to say negative interest rates is a viable tool to achieve its objectives.

The experience of the New Zealand Dollar in 2020 confirms that expectations for negative interest rates in the future can prove to be a significant downward pull for a currency.

If over coming days and weeks markets start to increasingly price lower interest rates at the RBA then the Australian Dollar could endure a softer finish to 2020.

"The question on what tools will be used is open: while we think more quantitative easing will be the preferred choice over lowering rates, market expectations for a cut have risen quite significantly," says Pesole.

The RBA next meet on October 06, "and as we approach it we may see markets adding to their bets on a cut, and AUD facing some idiosyncratic downside risk," adds Pesole.

Growing expectations for a rate cut at the RBA could therefore combine with some good news about Brexit trade negotiations to create the conditions required to deliver further RBA gains and ensure the 2020 bottom for the exchange rate has now been recorded.

The obvious risk to this view is that the EU and UK fail to reach a deal.

"There has been a lot of talk in the market in recent weeks about whether or not sterling has now hit “peak bearishness”. Given the huge degree of political uncertainly faced by the UK in the coming months we would consider it foolhardy to rule out the prospect of further sharp losses for the pound," says Jane Foley, Senior FX Strategist at Rabobank.