The Pound softened against an outperforming Australian Dollar on Tuesday but is likely to hit a fresh post-referendum high in the coming weeks, according to strategists at Westpac, who've upgraded their forecasts for the British currency.

Sterling was up a fraction against most rivals in late noon trading, though not the Australian Dollar, after opposition MPs tabled amendments to a government bill that would alter the franchise by giving providing votes to teenagers and EU citizens in time for a widely anticipated general election that's expected to be held in early December.

This is after Prime Minister Boris Johnson won on Monday the support of Liberal Democrat and Scottish National Party MPs for a December vote, the third inside five years, prompting the Labour Party to claim it would also support an election motion Tuesday. But Johnson, who's without a majority in parliament, now says the attempt to legislate for a poll will be abandoned if the opposition's amendments are passed and they might because the SNP and Lib Dems have long supported broadening the franchise.

"This is a more benign outlook than we had been expecting, so we have revised our sterling forecasts sharply higher, with a new baseline view of GBP/USD tracking the low 1.30s well into 2020. As such, we see AUD extending losses against the pound in coming weeks and months," says Sean Callow, a strategist at Westpac, referring to the earlier election developments. 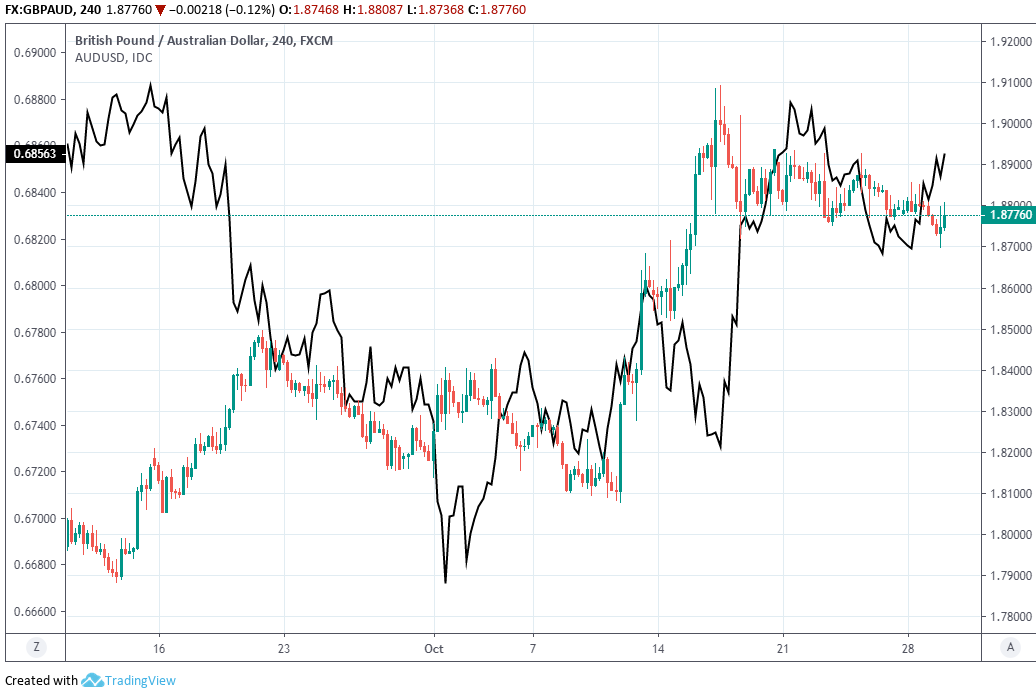 Voters will be called back to the polls before Christmas, likely between 09 and 12 December, to choose a third government since the summer of 2015. Currencies don't normally like elections but this time could be different for because it offers the prospect of certainty over the UK's future economic regime appearing on the horizon some time soon and also a fleeting shot at investors seeing the Brexit endevour scrapped altogether - for a period of time at least.

It's effectively another referendum on Brexit but one where there's more than two options on the ballot paper and a lower threshold for absolute victory. However, and crucially for markets, the risk of a 'no deal' Brexit is close to having been banished form the universe of possibility until at least the end of 2020. This is because Johnson, who's seen as the only likely winner among Brexit-backing parties, is gearing up to pitch his withdrawal agreeement to the electorate rather than a 'no deal' exit.

"UK PM Boris Johnson appears to have switched from Brexit by end-October “do or die” to going all-in on his plan. Considerable doubt over this plan and an early election remains at time of writing but the key positive for markets is the sharp reduction in the risk of a no-deal or “hard” Brexit," Callow says. 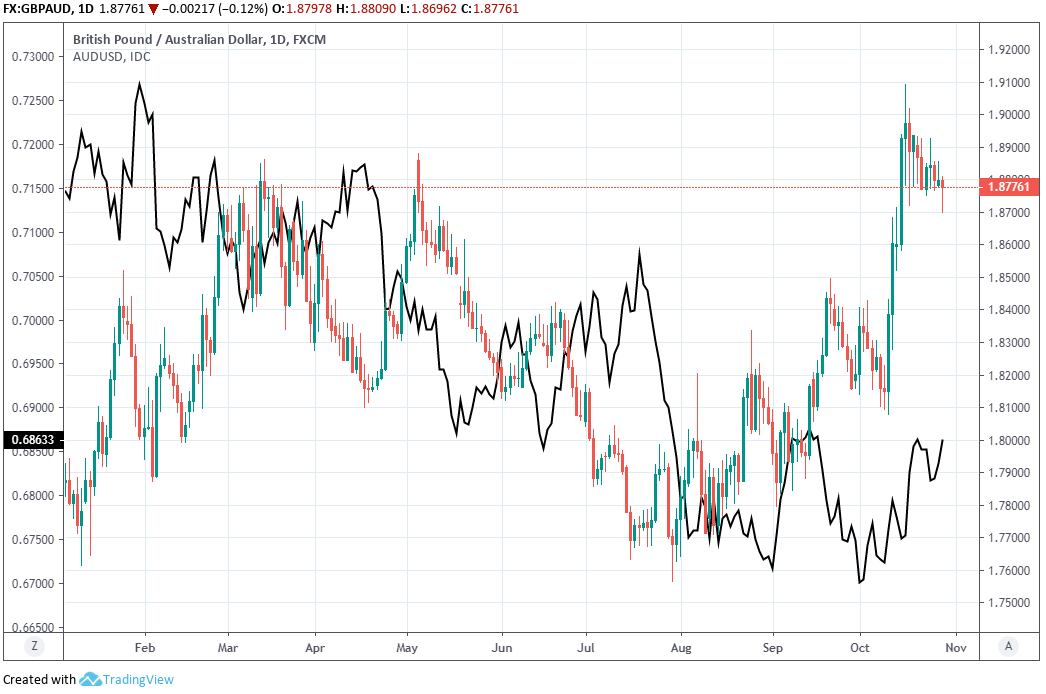 Johnson reached a formal agreement with the EU earlier this month that could facilitiate an orderly exit from the bloc, on paper at least, from the moment it's ratified by parliaments on both sides and is now gearing up to seek electoral support for it after winning the Conservative Party leadership election in the summer. However, it remains to be seen whether the pact - not to mention the rest of the Conservative Party manifesto - will win enough support within a divided populace.

Surveys of voting intentions suggest it will be a tight race between four horses, although memories of Theresa May's bitter 2017 upset are still fresh. The Conservatives will pitch Johnson's Brexit proposals while the Liberal Democrats run on an anti-Brexit ticket and the newly-minted Brexit Party flogs the 'no deal' or 'clean break' Brexit it's been clambering for since the party was founded earlier in 2019. Meanwhile, the position of the official opposition Labour Party remains a point of contention.

"Our AUD/USD view is unchanged, with a year-end target of 0.67. Lending some support is our view that the RBA keeps the cash rate steady until Feb 2020, whereas pricing for another cut by Dec 2019 is around 50%. Yet this is only a minor reprieve for A$," Callow says. "So long as the UK government remains focused on passing an EU-approved Brexit deal by Jan 2020, GBP should continue to outperform AUD." 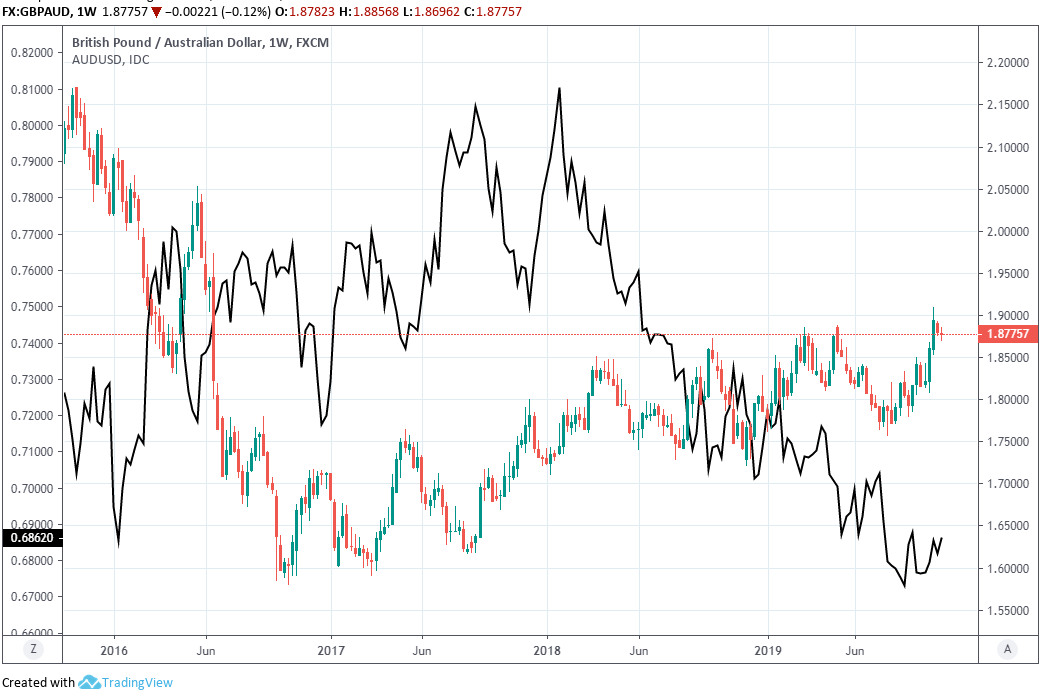 Callow says the Pound can rise as far as 1.94 against the Australian Dollar up ahead, which would be Pound-to-Aussie rate's highest level since the June 2016 referendum, so long as Boris Johnson eschews the campaign trail toward a 'no deal' Brexit. The bank also tips a strong performance for the GBP/USD rate and a gentle decline by the AUD/USD pair as Reserve Bank of Australia (RBA) interest rate policy weighs on the antipodean currency.  Westpac forecasts an AUD/USD rate of 0.67 at year-end.

The RBA has cut rates three times this year in an effort to lift Australian growth and inflation, although Westpac as well as the wider market both expect it to cut the cash rate again, to a new record low of 0.5%, before long. This has more than offset for investors, the two cuts announced so far by the Federal Reserve and the next policy changes are expected to accentuate to the market what is a mounting disadvantage for the Aussie when it comes to bond yields.

"AUD’s yield premium has trended lower since September 2017 when the BoE MPC struck a hawkish note," Callow says. "AU yields have been the main driver, as markets started to price RBA rate cuts that were finally delivered in June, July and October 2019. AUD’s yield advantage in this part of the curve has vanished, with both cash rates at 0.75% and guidance for historically low rates for some time...yield spreads suggest plenty more downside risk for AUD."