- Says to cut again if necessary, as Westpac eyes February 2020.

- MUFG warns on prospect of new decade-low in AUD/USD rate.

The Pound jumped by a percent against the Australian Dollar Tuesday after the Reserve Bank of Australia (RBA) cut its interest rate to a new record low and hinted strongly of more cuts to come, which some analsts say now risks pushing the antipodean currency to its lowest level for more than a decade.

Australia's central bank cut the cash rate to an all-time low of 0.75% Tuesday, in line with the market consensus, citing a continued weakening of the global economy and concerns about the outlook for jobs down under as risks to its inflation target. The RBA said the economy needs a lower rate of unemployment if it is to see the wage pressures that would enable the bank to meet its inflation target, but warned that jobs growth is likely to slow even further in Australia up ahead, even though unemployment has recently risen.

"The themes in the Statement are in line with previous Statements: global growth outlook risks tilted to the downside; further monetary policy easing by other central banks is widely expected; Australian economy can sustain lower rates of unemployment and underemployment; inflation pressures remain subdued; little upward pressure on wages. However, while the Governor confirmed the inflation forecasts of the Statement on Monetary Policy in August he did not do the same for the growth forecasts," says Bill Evans, chief economist at Westpac. "The RBA may be preparing to lower its growth forecast for 2020 when we see the revised forecasts on November 8."

The Pound-to-Australian Dollar exchange rate is higher at 1.8374 at the time of writing, ensuring the uptrend that has been in place since late July remains intact. Those with Sterling-Aussie payments should note the rate on offer at independent currency providers has now reached 1.8270, well ahead of the estminated 1.79 rate being offered on personal and corporate bank accounts.

Inflation has been below the 2%-to-3% target for years now only the economy has slowed in the last 12 months and with the U.S.-China trade war escalating repeatedly in 2019, could be set for a further deceleration up ahead. The tariff fight between the world's two largest economies is a headwind because China is the largest buyer of Australian resource exports, which is part of the reason why the two countries' currencies move in tandem with each other.

"Today’s decision and the associated Statement make a clear case that the cycle is not over yet. For that reason we are encouraged to expect another cut," Evans, who was one of the first to call October's cut, says. "One of the reasons we favoured October against the Consensus view of November was that October provided the flexibility to move in December should global conditions deteriorate sharply. That is not our forecast."

Westpac, one of Australia's four largest lenders is forecasting a fourth rate cut from the RBA in February and pricing in the overnight-index-swap market, which enables investors to protect themselves against as well as speculate on changes in rates, suggests investors are too. That market implied on Tuesday a February 04 rate of 0.49%, down from 0.56% on Monday, which is below the 0.50% rate that will prevail if the RBA cuts again.

One of the reasons markets might be so 'dovish' on the outlook is the RBA hinted Tuesday it could continue cutting rates until it achieves 'full employment', which is a hypothetical rate that is thought to be necessary for the generation of upward wage and inflation pressures. It's also a term sometimes used by policymakers as a substitute for the 'non-accelerating inflation rate of unemployment', which is an even more conceptual academic idea.

"Our view for a while now has been that interest rate cuts are of limited use: households tend to leave their home loan repayments unchanged, so little additional spending power is unleashed," says Belinda Allen, an economist at Commonwealth Bank of Australia. "Tax cuts are a better response to the pressures in the household sector and the weakness in consumer spending. Nevertheless, the risks still lie with further interest rate cuts...We expect a further 25bpt cut for this cycle in February 2020." 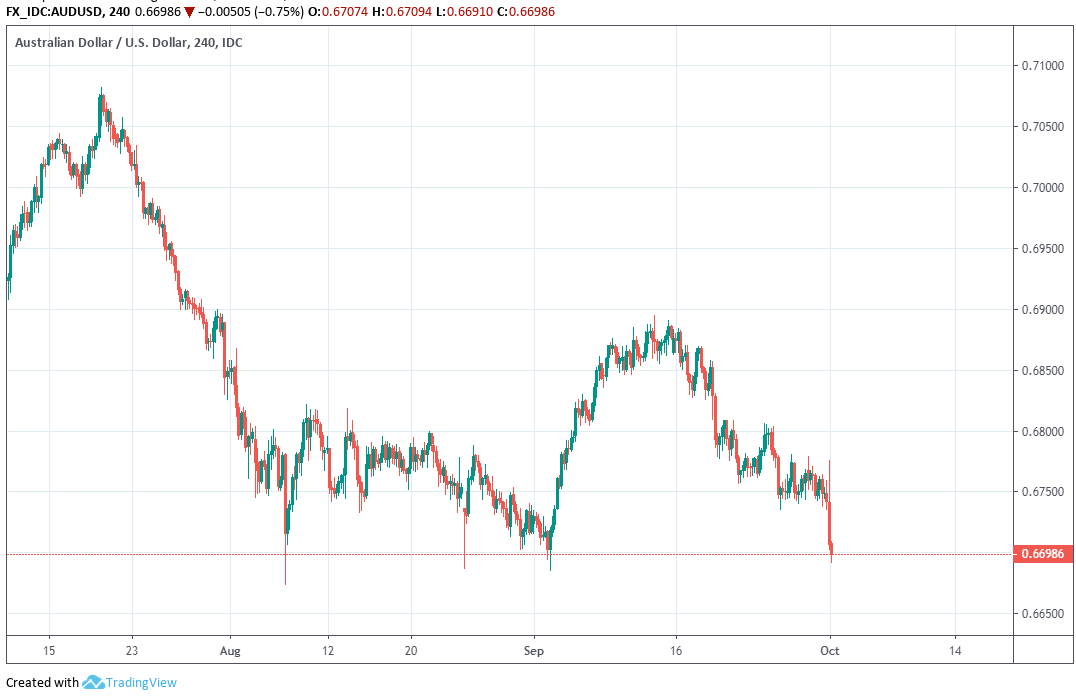 The employment goal, which was omitted from September's statement, could mean even lower rates for a much longer period than otherwise will have been the case. Especially if the Australian and global economies continue to weaken further up ahead, and there are some reasons to think they might.

"It has resulted in the AUD/USD rate falling back within touching distance to the low from last month at 0.6677 recorded on the 7th August. A decisive break below would open the door to a potential retest of the lows recorded during the peak of the global financial crisis back in late 2008/early 2009 between 0.6000 and 0.6500," says Lee Hardman, a currency analyst at MUFG, of the RBA's cut. "The Australian dollar has been trending lower since the start of 2018 which has coincided with the slowdown in the global economy, and there is little to suggest yet that the tide will turn anytime soon...Risks remain skewed to the downside for the Aussie in the near term."