"There is an important risk that the Rand’s strong November could retrace relative to other, similarly high-‘beta’ currencies," - Goldman Sachs

South Africa's Rand had appeared poised to push higher against the U.S. Dollar after the South African Reserve Bank (SARB) raised the local cash rate to its highest level since 2009 on Thursday but by Friday the USD/ZAR pair had climbed back above the 17.0 handle.

Friday's uplift in USD/ZAR came as the Dollar climbed from what were multi-month lows against some currencies in a partial reversal of the heavy losses that pushed most U.S. exchange rates lower through much of November.

"We think that the Dollar weakness we’ve seen so far in November may be over-done in places, and that the Rand in particular is one of the clearer cases in which November appreciation appears vulnerable to a retracement," says Kamakshya Trivedi, co-head of foreign exchange strategy at Goldman Sachs.

"Exhibit 3, for example, shows that—along with GBP—the lightly-positioned Rand has appreciated about 6% more vs the Dollar than it ‘should have’ since the November FOMC meeting based on its typical sensitivities to key global market variables," he adds while writing in a Wednesday research briefing. 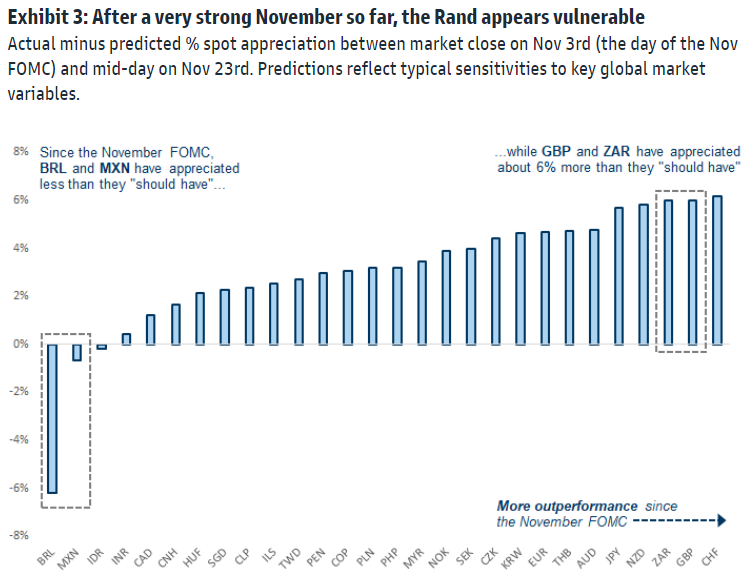 While the Rand fell notably on Friday it remained the third best performing currency within the G20 bucket for the month of November in what is testimony to the scale of gains notched up earlier in the month when the financial and economic stars aligned to drive Dollar exchange rates lower.

Those gains helped lift the Rand from near the bottom of the G20 league table for the year overall to within the upper quartile as investors and traders booked profits on some of the year's most heavily bought and sold trades.

"Not all of the Rand’s recent strength is explicable by positioning, or by the broad Dollar: the Rand is one of the currencies that is most exposed to enthusiasm around a Chinese reopening, for example," Trivedi says.

Goldman Sachs attributes a large slice of November's outperformance to South Africa's trade relationship with China and the currency's sensitivity to movements in the Renminbi, which is also why the Rand could benefit further from anything that improves the Chinese economic outlook up ahead.

However, and on the downside, Trivedi has warned that local economic data poses risk to the Rand and especially the December 08 release of the South African current account balance figure while Goldman Sachs is forecasting a rebound from U.S. Dollar exchange rates into year-end. 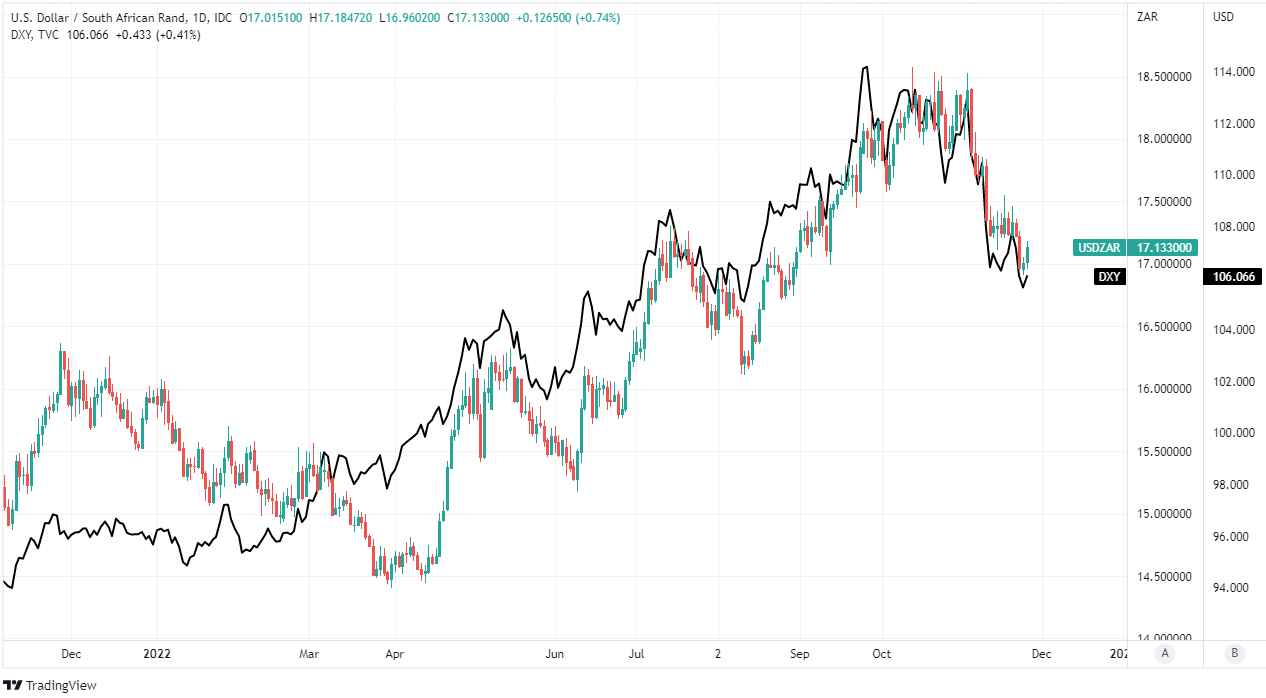 Above: USD/ZAR shown at daily intervals alongside U.S. Dollar Index. Click image for closer inspection. If you are looking to protect or improve your international payment budget you can secure today's rate for use in the future or set an order to lock-in your ideal rate whenever it becomes available. More information can be found here.

"There is an important risk that the Rand’s strong November could retrace relative to other, similarly high-‘beta’ currencies. In particular, we will continue to look for more clarity on the policy mix in Brazil in order to re-engage our view to be long BRL vs ZAR," Trivedi and colleagues say.

Dollars were sold heavily from early on this month but most notably after official data released on November 10 suggesting that U.S. inflation rates ebbed further than was expected in October, data that was released amid speculation about a possible shift in China to a less stringent coronavirus containment policy.

While containment measures have since been tightened again in parts of China, the rumours were a filip for sentiments toward the global economy that weighed heavily on the Dollar amid much market focus on the prospect of the Federal Reserve (Fed) lifting interest rates at a slower pace going forward.

The latter focus may have been misplaced, however, to the prospective benefit of the Dollar and detriment of the Rand as there remains a risk of the Fed lifting its interest rate further than financial markets give credit for and for longer than many around the markets have so far assumed.

This is why next Wednesday's previously-unscheduled speech from Fed Chairman Jerome Powell will likely garner much market attention in advance of the Personal Consumption Expenditures inflation reading and non-farm payrolls report due out on the Thursday and Friday.

"We think markets and the FOMC will start to push back on the substantial FCI [financial conditions index] easing over the last month, which we think is still inconsistent with Fed’s policy goals," colleagues of Trivedi said this week.