South Africa's Rand was treading water near 2-year lows against a broadly stronger Dollar on Wednesday in a show of resilience that helped to lift the currency against most G20 counterparts following the earlier release of inflation figures for the month of August.

Inflation eased from 7.8% to 7.6% last month in line with expectations while the more important core inflation rate registered a surprise decline from 4.6% to 4.4% after prices softened once food, non-alcoholic beverages, fuel and energy items were removed from the basket of goods under the microscope.

While falling inflation is a positive influence on the value of currencies, it's unlikely that August's data alone would alter the SARB's interest rate stance.

"Both the SARB and the FOMC are seeking to get their targeted measures of inflation back to 4.5% y/y and 2.0% y/y respectively, with South Africa’s inflation figures today not sufficient to show a downwards trend (nor those in the US), which is what will be needed to eventually halt rate hikes," says Annabel Bishop, chief economist at Investec. 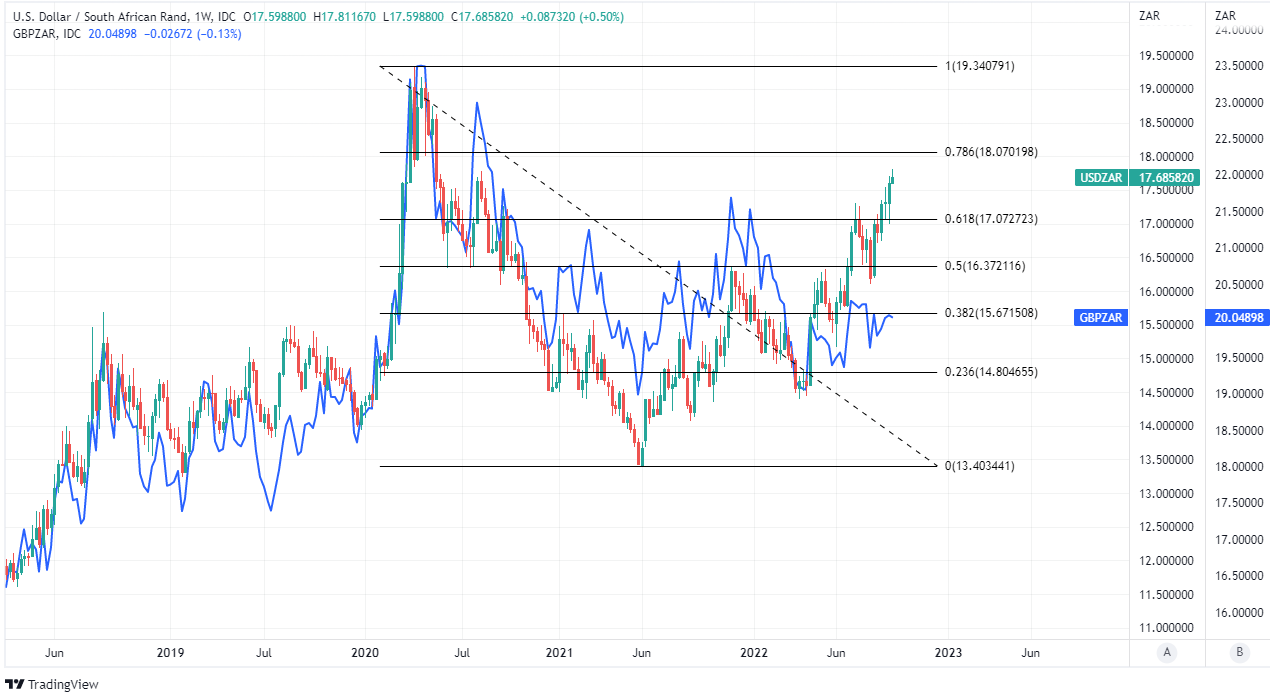 "For the repo rate, markets are pricing in an 81bp lift in as well, moving in lockstep with the expectations for the next move in US interest rates. Indeed, the SARB will likely move by at least 75bp, but could always surprise with a 1.00% lift, which would strengthen the rand," Bishop said on Wednesday.

South Africa's reserve bank lifted its interest rate by 0.75% to 5.5% in July, the largest increase since around the turn of the new millenium, while citing a desire to lean against an upward drift in business' and households' expectations for inflation in future years.

Whether Thursday's increase is large enough to prevent the differential between South African and U.S. interest rates from narrowing is potentially an important influence on the outlook for USD/ZAR and other Rand exchange rates.

"While MPC members are reluctant to give explicit forward guidance, we know a myriad of factors inform their decisions. Most notable will be the pace of Fed tightening and impact on the rand," says Carmen Nel, an economist and fixed income strategist at Matrix Fund Managers.

Almost all economists expect the Fed to lift its interest rate by 0.75% to 3.25% although interest rate derivative market prices suggests some investors believe there is a risk of it opting for an exceptional 1% increase. 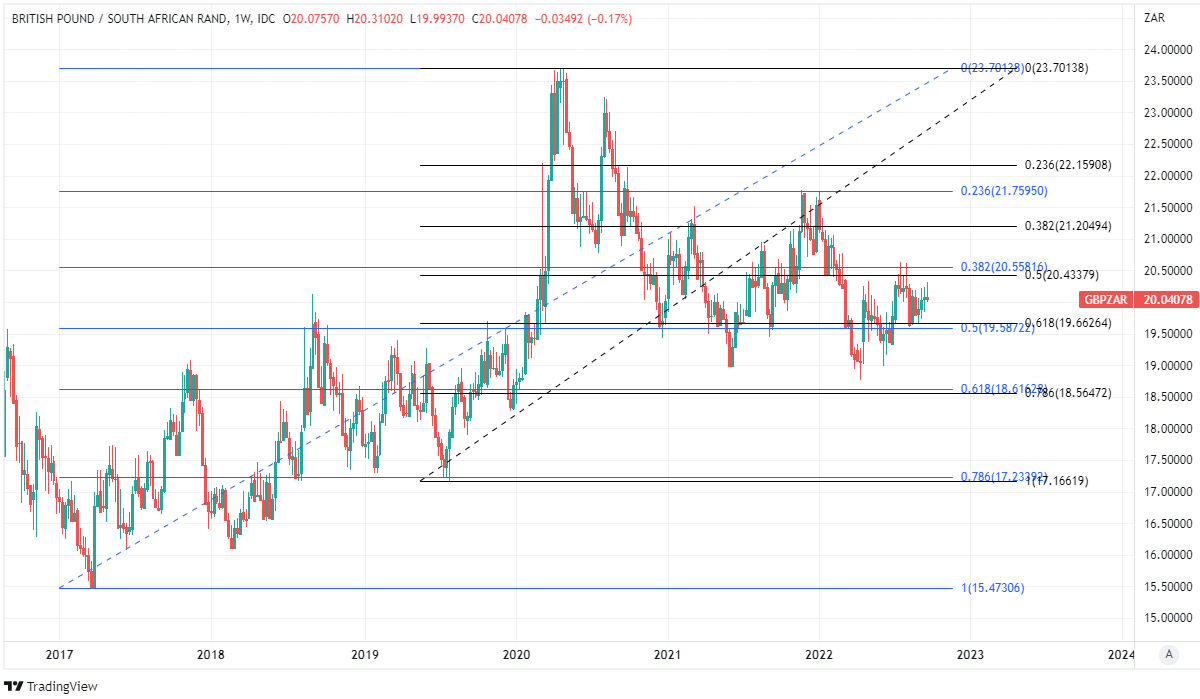 Above: GBP/ZAR shown at weekly intervals with Fibonacci retracements of 2017 and 2019 uptrends indicating possible medium-term areas of technical support.

"Pricing of a 81bp hike may indicate some breathing room if the Fed delivers “only” 75bp, as per our and the consensus forecasts, but we believe that it is unlikely to strike any dovish tone, as inflation data have yet to provide any relief," says Sheryl Dong, an FX and EM macro strategist at Barclays.

"The eventual subsiding of inflation and topping of Fed hike expectations could pull the USD down from its overvalued levels, but a shift in USD cycle needs a rebound of non-US growth, especially in Europe, with its natural gas concerns, and in China, with deleveraging and the zero-COVID policy, in our view," Dong wrote in a Tuesday research briefing.

While Fed and SARB policies are both crucial influences for USD/ZAR, there may be a risk of GBP/ZAR sustaining further losses on Thursday and almost irrespectively of what the other central banks decide due in large part due to risks surrounding September's Bank of England (BoE) decision.

Analysts and economists are also split over the extent to which the BoE may lift Bank Rate on Thursday, although none of this year's five separate increases have done any favours for Sterling and August's larger-than-expected increase was followed by widespread losses for the currency.

Sterling losses could be seen again too and perhaps on a greater scale if the author is right to suspect that recent UK inflation developments will see the BoE lift Bank Rate much further than more or less all forecasters imagine.