South Africa’s Rand unwound on Tuesday what was a strong earlier start to the week as the U.S. Dollar advanced broadly to offset official data detailing a resilient economic performance throughout the second quarter and a period in which the economy was the subject of intense disruption.

“April’s flood damage to economic capacity, higher interest rates and slowing global growth all contributed to the poorer outcome for economic activity in Q2.22, while the high base on Q1.22’s economic activity also had a very suppressing effect,” says Annabel Bishop, chief economist at Investec.

“South Africa remains a small, open economy, and as such, will be negatively affected by the weakening global economic environment. However, in the near term some bounce back is expected in Q3.22 off Q2.22’s low base for GDP, but this will likely be modest,” Bishop said on Tuesday.

The Dollar rally left almost no currency untouched on Tuesday and the Rand was by no means an underperformer after several G10 currencies and some other G20 counterparts sustained notably heavier losses including the Australian and New Zealand Dollars. 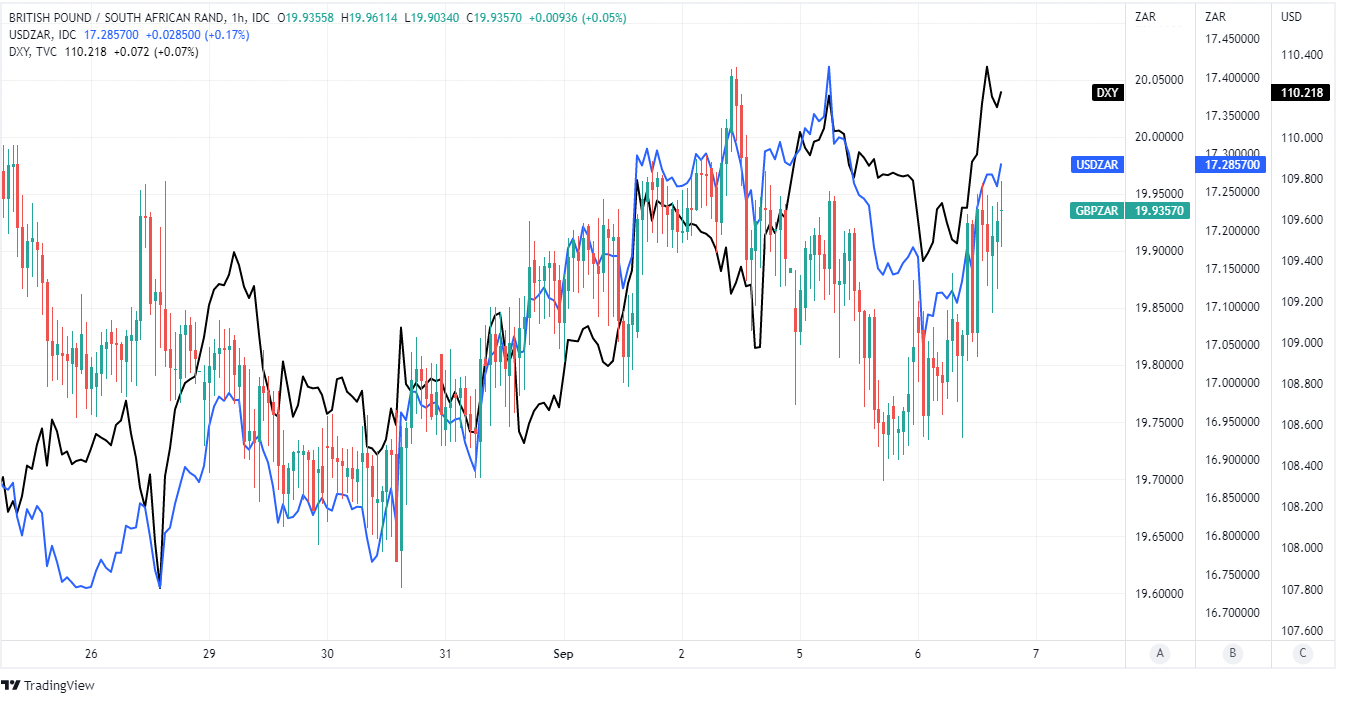 Above: GBP/ZAR shown at hourly intervals alongside USD/ZAR.

The U.S. Dollar rose and other currencies declined throughout the European session on Tuesday following another leg lower by the Chinese Renminbi and in the wake of a surprise increase in the U.S. Institute for Supply Management (ISM) Services PMI.

“We got this one wrong; we took our lead from the services PMI, which usually is a decent - though not infallible - indicator of the ISM and has fallen for five straight months,” says Ian Shepherdson, chief economist at Pantheon Macroeconomics.

“It’s possible that the later survey collection period for the ISM means it captures more of the clear rebound in consumers’ spending on discretionary services, but that’s just conjecture,” Shepherdson said.

This was amid press speculation about economic policies that could include public funding to support energy companies who defer increases in household and business bills until after the next election in 2024.

Above: GBP/ZAR shown at daily intervals alongside USD/ZAR.

“The costs quoted in the above media reports (£130bn for households policies and £40bn for businesses policies) amount, in our understanding, to an estimate of the nominal guarantees based on current energy future prices. The actual costs for the government would be limited to the residual losses,” says Fabrice Montagne, chief UK economist at Barclays.

The UK government measures are aimed at preventing a high single digit multiplication of domestic energy prices from causing economic calamity following the final quarter when tariffs are expected to reach around eight times the levels seen in September 2021.

But these measures could also prompt the Bank of England (BoE) to raise Bank Rate much more aggressively than it has so far with uncertain implications for Sterling and the Pound to Rand exchange rate further down the line.

However, and in the meantime, international factors are likely to remain prominent influences for both Sterling and the Rand with many forecasters suggesting that each is at risk of further declines in relation to the Dollar.

“The ZAR has been one of the worst EMFX performers over the last month, not helped by higher US rates and softer asset prices, plus the renminbi softening to new lows on China slow-down fears. As a growth sensitive currency, it will be a challenging couple of quarters for the rand,” says Chris Turner, global head of markets and regional head of research for UK & CEE at ING.