- ZAR outperforms anew as USD ebbs & GBP/ZAR slides
- 14.00 ”is not out of the question,” says Societe Generale
- As market hankers after blockbuster U.S. payrolls report
- Back-to-back blockbusters a double-edged sword for ZAR 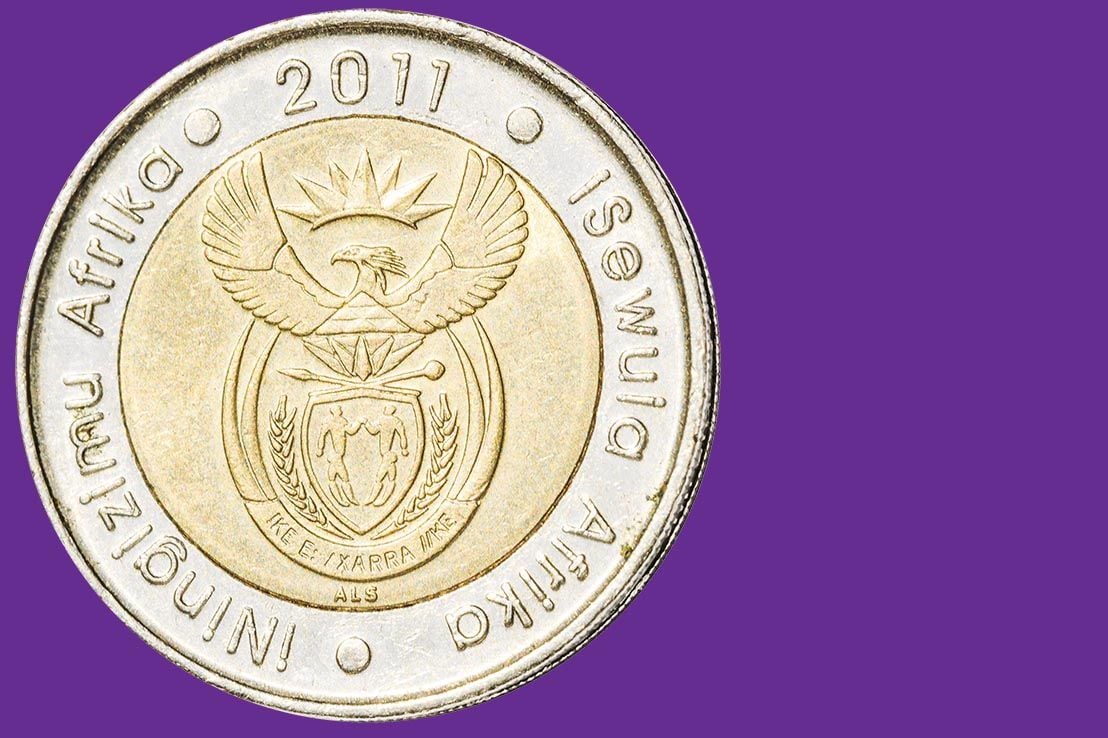 The Rand has lifted off two month lows to outperform many others early the new month, leading the Pound-to-Rand exchange rate to explore the land below 20.00 this week in price action that comes alongside an ebbing of the U.S. Dollar, although a double-edged sword now hangs above the South African currency.

South Africa’s Rand was higher against all of the most heavily traded developed and emerging market currencies on Tuesday with the exception of the Indonesian Rupiah, continuing a week-long period of outperformance.

The Rand overlooked Monday’s ABSA manufacturing PMI, which fell more than was implied as likely by consensus among economists for July, a month when civil disorder brought chaos to some parts of South Africa and throughout which the country was subject to its most stringent level of coronavirus-related curbs on activity and social contact.

“Sentiment was negative almost across the board. A small light at the end of this tunnel was the improvement in expected business conditions in six months’ time,” says Siobhan Redford, a macroeconomist at Rand Merchant Bank.

This Wednesday sees results of another manufacturing sector survey released from IHS Markit although all of the indications are that most recently the Rand and many other currencies are being carried higher by an ebbing of the U.S. Dollar’s earlier strength 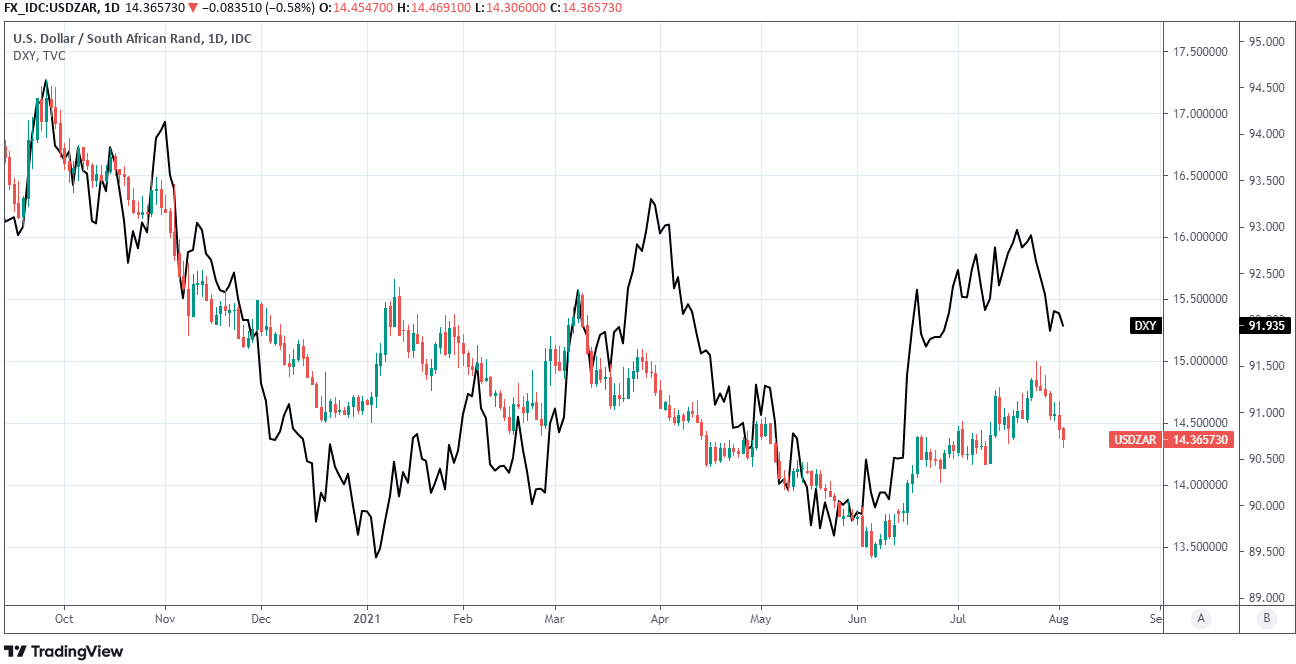 Above: USD/ZAR shown at daily intervals alongside U.S. Dollar Index.

Last week Chairman Jerome Powell and Federal Open Market Committee (FOMC) colleagues at Fed effectively confirmed that they are now in the process of providing the “advance warning” that was assured before any eventual decision to announce a tapering of the bank’s mammoth $120BN per month quantitative easing (QE) programme.

This will lead to “more and more clarity as we move forward,” through the coming FOMC policy meetings, notably in relation to the time and pace at which the bank will slow the rate of its bond purchases, although the rub for the Dollar and boon for the Rand has been that the Fed’s language thus far points to this being a slightly slower and more drawn out process than had been envisaged by many in the market.

For the U.S. Dollar the risk is that an announcement containing plans for the QE taper does not come until November or later rather than in September, which is when many were expecting it to be announced.

“USD/ZAR skidded back below 14.40 and a pullback towards 14.00 is not out of the question if 14.10 can be overcome,” says Kenneth Broux, a strategist at Societe Generale.

Dollar declines have favoured the Rand over the likes of Sterling and with that the Pound-to-Rand exchange rate has seen even sharper declines than those of USD/ZAR despite that Sterling itself has outperformed many in the G10 contingent of major currencies over the last week.

“Markets will look to payrolls and ISM services data later in the week for direction. Fed speak will also be crucial as FOMC members provide their views on whether the Fed is likely to taper QE purchases sooner,” says Mark McCormick, global head of FX strategy at TD Securities. 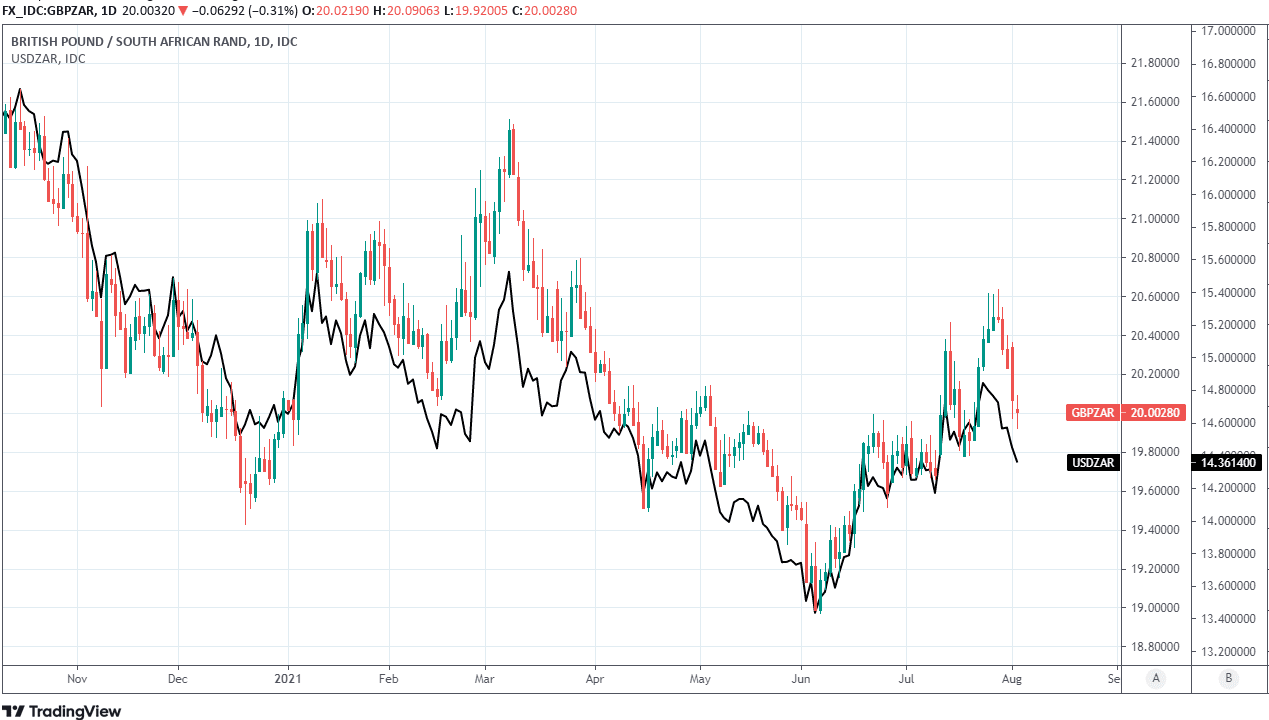 Above: Pound-to-Rand rate shown at daily intervals with USD/ZAR.

With the Dollar trend dominant the highlight of this week for the Rand is, like for all other currencies, the U.S. non-farm payrolls report for July that is out on Friday at 13:30 and will be a key informant of expectations for analysts, investors and traders.

This is after Chairman Powell said last week “I would want to see some strong job numbers and that’s kind of the idea,” before being willing to view the U.S. labour market as having made “substantial further progress” toward the “full employment” the Fed is seeking.

Friday’s report is all the more key for the Fed’s taper timeline and the trajectory of the Dollar because of elevated economist expectations heading into the release, which consensus suggests will reveal that 895k jobs were either created or recovered from the coronavirus last month.

That would be the second consecutive month in which the economy will have produced close to 1 million jobs, reflecting back-to-back blockbuster job reports that have not been seen since the U.S. reopening from initial economic closures in the second quarter of 2020.

This is a double-edged sword for the Rand because although such lofty expectations might easily make for disappointment and further declines by the Dollar, if realised in reality, a back-to-back jobs blockbuster could put the September month back on the table for a QE taper announcement.

“US Federal Reserve Governor Christopher Waller has been quoted suggesting that he’d back tapering of asset purchases as early as September if employment gains continue,” notes Rand Merchant Bank’s Redford.