The Rand was soothed and the outlook for it smoothed on Thursday after the South African Reserve Bank (SARB) upgraded its forecasts and gave the currency market a not-so-subtle hint that it has no objections to a strengthening of South Africa's exchange rates this year.

South Africa's Rand was lower against the Dollar, Pound and Euro on Thursday in an apparent response to risk aversion among investors on global markets, although it was doing better than many other emerging market currencies in the wake of the latest SARB monetary policy decision.

"Despite most commodity pairs and the broader EM complex being almost 2% weaker against the greenback, the local unit has been anchored between USD/ZAR14.75 and 15.00," writes Nema Ramkhelawan-Bhana, head of research at Rand Merchant Bank in an early morning note Thursday. "The options market isn’t providing a clear view of rand expectations. Unless the SARB offers forward guidance, there’s little support it can provide."

Rand performance was aided by Governor Lesetja Kganyago and colleagues who revised up forecasts for inflation and GDP growth in 2021 while tweaking lower their estimate of the 'output gap' or space between the prevailing level of economic output and that necessary to sustain the bank's inflation target.

The latter was revised down across the forecast horizon while the SARB included in the assumptions underlying its policy decision a 2021 bout of strength in both nominal as well as real terms South African Rand exchange rates in what was a not so subtle hint about its asking of the currency market.

"The decision to keep the repo rate on hold was unanimous, departing from the 3-2 split witnessed since the September 2020 meeting," Ramkhelawan-Bhana said after the decision. "This is in line with our expectations for the repo rate to remain unchanged at 3.50% until the end of 2021. The unanimous decision, however, does indicate that the probability of further rate cuts has significantly reduced and that the repo rate is likely to have bottomed." 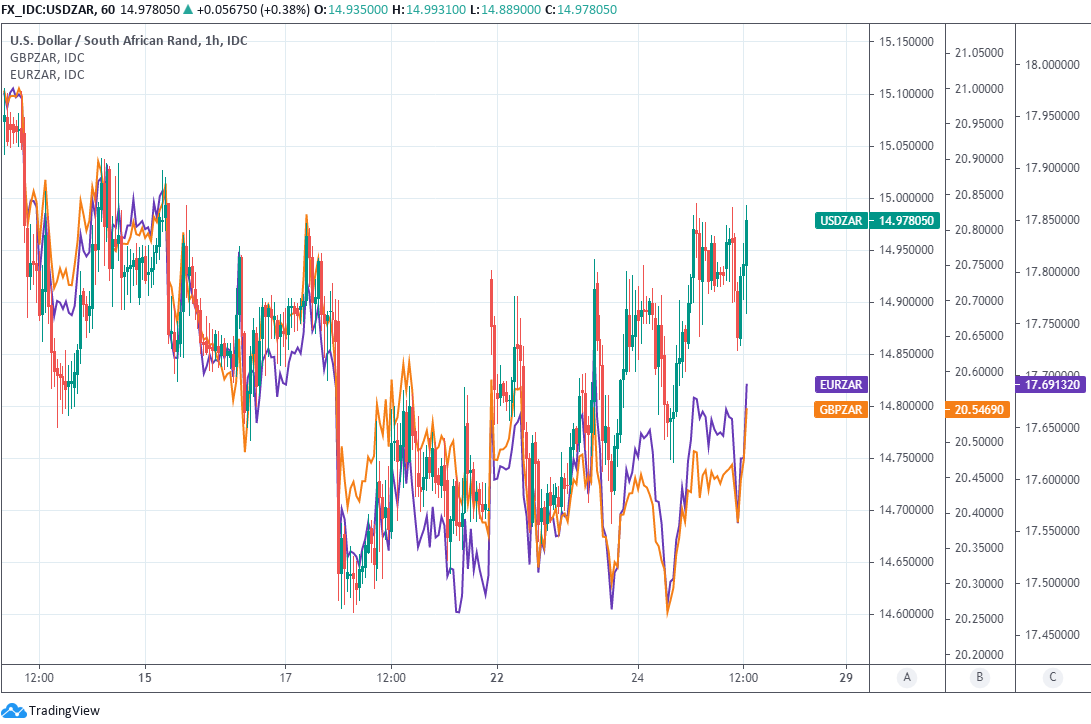 Above: USD/ZAR shown at hourly intervals with GBP/ZAR (orange) and EUR/ZAR (purple).

The advent and increasing proliferation of coronavirus vaccines has instilled hope within policymakers, pundits and peoples alike that a return to some semblance of normality is now in the pipeline, leading to upgraded expectations for economies across the board this year. To the extent that South Africa has been an exception, it's only because the economy has shown increasing resilience to the trials and tribulations of the coronavirus containment process.

"With stronger quarterly outcomes for the rest of this year, the economy is expected to grow by about 3.8% (up from 3.6%)," the SARB said before emphasising balanced risks to an outlook that is less assured within the forecast horizon once beyond 2021. "Getting back to pre-pandemic output levels will take time. While recent lockdown restrictions have proved less constraining to economic activity, loadshedding has been substantial and consumption moderated after December."

This has been key to the more optimistic tones emanating from central banks across the board and has had widespread implications for financial asset prices, some of which imply a greater tolerance of currency strength at the SARB. Greater tolerance of Rand strength was the message sent by the SARB this week when it revised higher the assumed performances of South Africa's effective exchange rates, which measure the performance of a currency against its most important trading partners.

"Rising oil prices have increased the economy’s total import bill, offsetting some income gains from a stronger terms of trade," the bank said in its statement. "The overall risks to the inflation outlook appear to be balanced. A more appreciated nominal exchange rate in recent months, and generally low pass-through, is expected to continue to moderate some inflationary pressure." 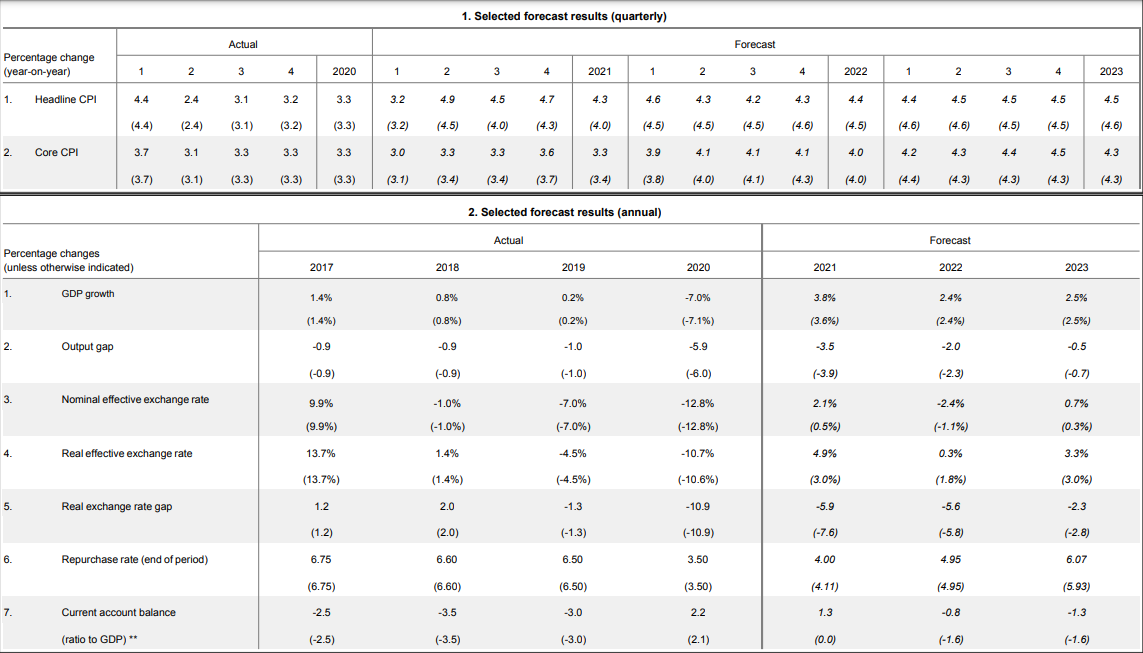 Above: SARB economic forecasts and assumptions, March 2021. Click image to enlarge within a new browser tab.

SARB projections now assume a 4.9% 2021 increase in South Africa's real-effective-exchange-rate, up from +3% in January, in a development that is likely connected to recent price action in the market for oil. Oil is up 20% in 2021 with nearly half this gain coming in March alone and given that South Africa is a large net-oil importer these price moves risk having an inflationary impact that policymakers might like to avoid if they can.

"Despite generally favourable global conditions and considerable rand appreciation through the latter half of 2020 and into this year, the rand remains below its estimated long-run equilibrium value," SARB says. "The Quarterly Projection Model (QPM) indicates an increase of 25 basis points in each of the second and fourth quarters of 2021."

It goes almost without saying that South African policymakers left their main interest rate unchanged at 3.5% on Thursday pending a change in the balance of risks for growth and inflation. Central banks use interest rates and other monetary policy tools including quantitative easing and foreign exchange market interventions in order to manage inflation pressures such that they're consistent with statutory mandates and preset targets.

The SARB's target is the midpoint of a 3%-to-6% range, while the universal policymaker playbook would typically see excessive inflation pressures curbed by either higher interest rates, lesser quantitative easing and, or, foreign interventions that have the effect of strengthening exchange rates and vice versa.

"The pressure on the TRY may temporarily induce some pressure on other EM high yielders, including on the ZAR, particularly should upward pressure on US yields persist. However, in our view, the spillover should be limited, as Turkey is perceived as a specific market, with strong idiosyncratic factors," says Sebastien Barbe, head of emerging market research & strategy at Credit Agricole CIB. 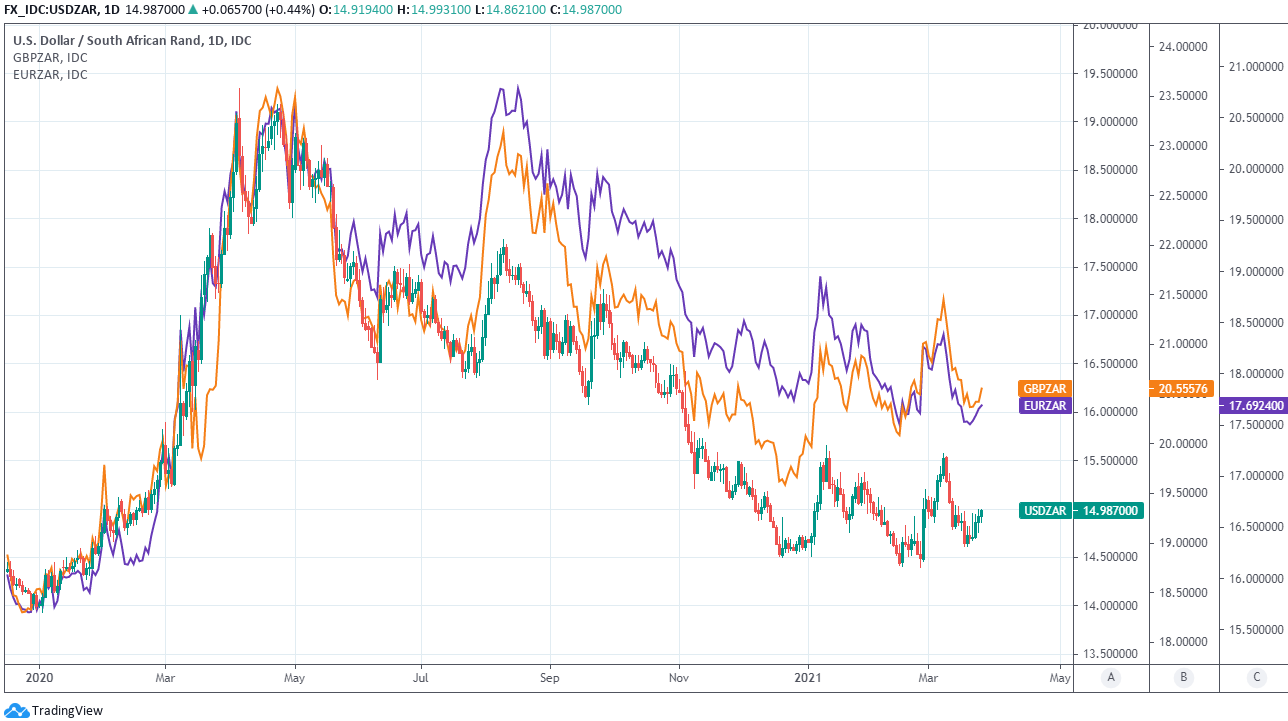 Above: USD/ZAR shown at daily intervals with GBP/ZAR (orange) and EUR/ZAR (purple).