- ZAR on the front foot
- GBP/ZAR could break below 20.00 imminently
- EUR/ZAR and USD/ZAR forecasts from Commerzbank
- One analyst says ZAR strength to ultimately reverse again

The South African Rand strengthened to its strongest level against the U.S. Dollar and approached a key marker against the Euro at the start of the new week, driven by a boost to investor sentiment that has in turn aided international interest in South African assets.

Demand for the Rand rose as global markets retained their bullish 'risk on' theme that has characterised February, with investors searching out high-yielding assets which include those in emerging markets such South Africa.

The global economic recovery is expected to step up a gear in 2021 as the covid-19 pandemic fades, leaving South Africa's economy poised for a comeback. "South Africa appears to have weathered the worst in the second wave of the pandemic. Confidence in global markets is supporting the rand," says Elisabeth Andreae, FX and EM Analyst at Commerzbank.

The Rand will likely find support as international investors buy up South African government and corporate debt - which offer superior, albeit riskier, returns to similar assets in the developed world.

Analysts at NedBank say South Africa should attract interest this week as some of its big-name stocks report earnings.

"Commodities will take centre stage this week as strong earnings are expected from the mega-miners. EM risk-on sentiment should continue to see our domestic names outperform," says Research Analyst Reezwana Sumad at NedBank.

China remains the global engine for commodity demand, with a huge stimulus programme ensuring the country recorded positive growth in 2020 despite being the originator of the covid-19 virus.

The Rand could benefit should a broader global recovery accentuate the rise in commodity prices driven by China, thereby underpinning South Africa's improving terms of trade.

The Pound-to-Rand exchange rate's decline meant it was back to testing the psychologically significant 20.00 area, and a break below 20.00 looks likely ahead of a retest of the December 21 low at 19.42. 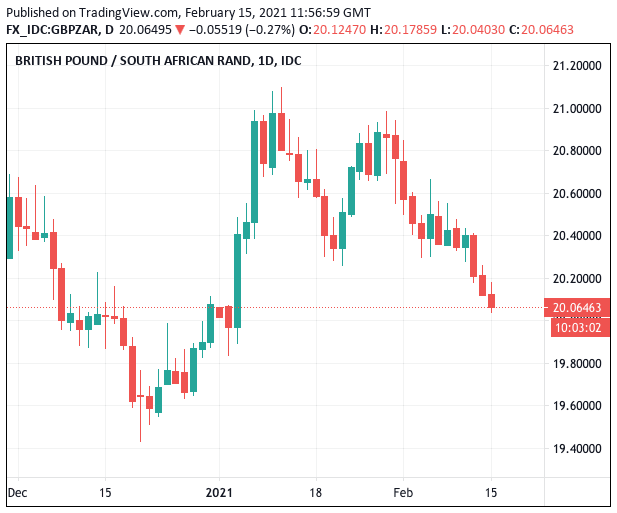 The Dollar-to-Rand exchange rate has meanwhile broken down to its lowest levels since January 27, 2020 having quoted as low as 14.41 on Monday.

The Euro-to-Rand exchange rate also felt the pressure of of ZAR appreciation and extended its almost uninterrupted February decline and quoted at 17.52.

Peter Stoneham, a Reuters market analyst says the Rand's rally versus the broadly weaker U.S. dollar "is beginning to show significant potential" from a technical viewpoint.

"USD/ZAR has dipped under the 200-week moving average, and a close below the 14.4823 line would be significant and extremely bearish. February 2019 was the last time the market closed below the long-term average," says Stoneham.

While technical targets suggest further ZAR appreciation is possible, fundamental strategists at Commerzbank warn that they are sticking to an assumption that the Rand is ultimately likely to come back under upward pressure at some point in coming weeks.

"Due to the fragile economy and significant fiscal risks, we see limited potential for ZAR recovery from the second half of 2021. The rand remains vulnerable to global risks," says Andreae.

According to the analyst, reasons to remain cautious of the South African currency are the mutated corona virus and only slow progress in vaccination which are jeopardising the economic recovery.

In addition, persistent bottlenecks in the power supply will remain a headwind for the economy and its currency says Andreae.