South African Reserve Bank rate setters voted with a three-to-one majority to leave the cash rate unchanged at 3.5% in January, in line with market expectations but also signalling a continued fine balance on the Monetary Policy Committee about the outlook for interest rates.

This was after a promising third-quarter economic recovery was marred in the final months of 2020 by surging new coronavirus infections and the discovery of a more infectious variant of the disease, which has prompted the government to tighten restrictions on social contact.

"Monetary policy has eased financial conditions and improved the resilience of households and firms to the economic implications of Covid-19, and continues to be accommodative. The steps taken by the Bank have ensured adequate liquidity in domestic markets. In addition, regulatory relief provided to banks has sustained lending to households and firms," Governor Lesetja Kganyago said.

South Africa will continue to suffer new waves of infection until vaccines can be made sufficiently available for the population to achieve herd immunity, Kganyago warned, which is expected to weigh on the economy alongside lower public and private investment. This is why two members of the MPC again preferred a 25 basis point rate cut this month. 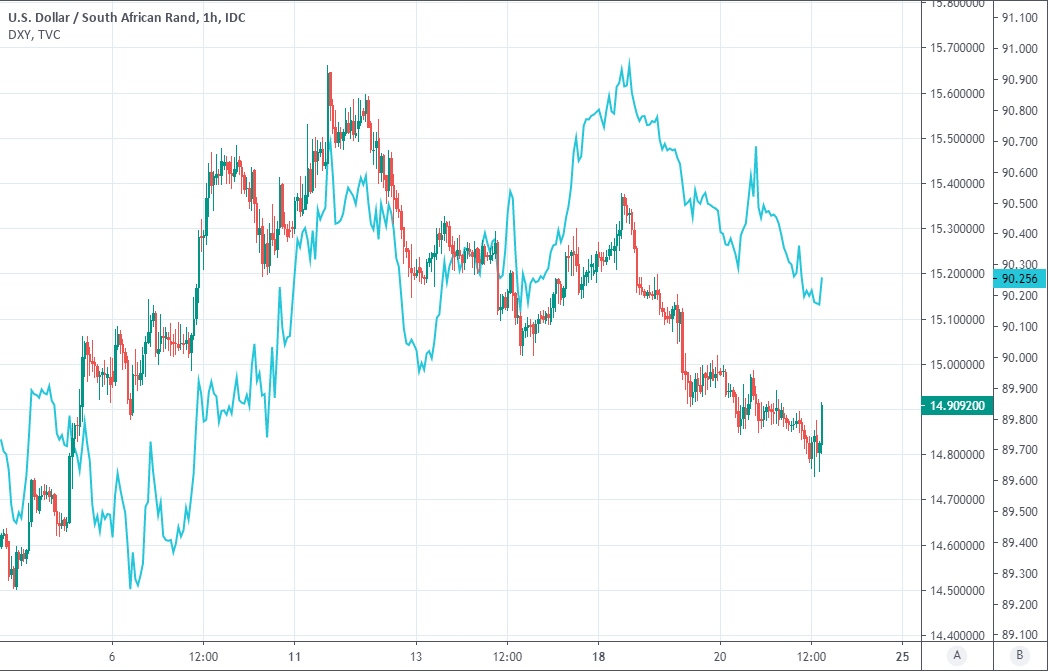 However, and despite the challenges littering the path ahead, the SARB's quarterly-projection model continued to advocated increases in interest rates later this year. The bank's model recommended a 25 basis point rise in each of the second and third quarters of 2021, having brought forward those recommended back in November when the model suggested waiting until the third and final quarters before raising rates.

"The easing bias reflected in the 3-2 split suggests that the repo rate is unlikely to rise as quickly as projected by the QPM," says the fixed income strategy team at Rand Merchant Bank. "Our house view is for the repo rate to remain unchanged at 3.50% in 2021 with a hiking cycle expected to begin in 2H22."

RMB says the model should either drop its recommendation or delay the advocated date of implementation as it recognises the difficulties ahead of the economy, while the SARB itself said the model can change its recommendations frequently and emphasised that the MPC doesn't automatically follow them.

"So far, the rand averages R15.12/USD this quarter, tending towards the R14.50/USD mark in times of risk-on, with further bouts of positive market sentiment likely as vaccine rollouts gain traction around the world," says Annabel Bishop, chief economist at Investec. "Commodity prices and currencies are likely to see further support this year, with the rand both a commodity currency and EM currency, but also be subject to volatility. We continue to expect that the rand will average R15.00/USD this quarter."

South Africa's economy is now expected to contract by -7.1% for 2020, down from the -8.0% warned of in November and following a stronger-than-expected third quarter rebound that lifted GDP at a quarterly pace 66.1%. The SARB had anticipated only a 50.3% increase.

This year's growth forecast was also revised tentatively higher from 3.5% to 3.6%, with estimates of the so-called output gap also revised lower while the outlook for growth and inflation was judged to be "finely balanced."

In addition, all of the bank's projections for the main inflation rate were nudged higher by 0.1% owing mainly to increased energy prices, although forecasts for core inflation were revised down across the board.

It's those forecast changes that may have led the SARB's model to bring forward the recommended implemention of interest rate rises, while anticipated future waves of coronavirus infections explain why the human eyes of the MPC opted to keep the option of a further rate cut on the table. It's inflation the bank is seeking to manage when it tinkers with interest rates, which have been cut from from 6.5% since the coronavirus escaped from China in 2020.

Future waves of infection could be more frequent and larger in light of the new variant discovered in South Africa, while the financially embattled country faces a longer wait time before vaccines are widely available than is the case in developed economies. This could mean prolonged economic disruption and an even slower recovery that necessitates ongoing policy support which only the central bank could provide, in light of the embattled public finances.

The Rand fell following the announcement, leading USD/ZAR and GBP/ZAR higher before gains in the latter were built on in the North American session when the Dollar turned tenatively higher against most rivals.

"We doubt that [virus[ concerns will be a major influence on the rand’s behavior in the near term as the number of new Covid cases is now falling," says Nimrod Mevorach, a strategist at Credit Suisse, who says the next major event for the Rand is February's 2021 budget. "We have been holding a USDZAR target of 14.90 since 11 November. Back then our bullish stance on the rand fit with our broader expectations for a period with USD weakness. We maintain our 14.90 target for USDZAR for now as we acknowledge that this level currently reflects only a mild bullish stance on the rand relative to the prevailing spot rate, which was around 15.00 as of the close of Tuesday (19 January). We now see a high likelihood that USDZAR will trade in a directionless fashion around our target." 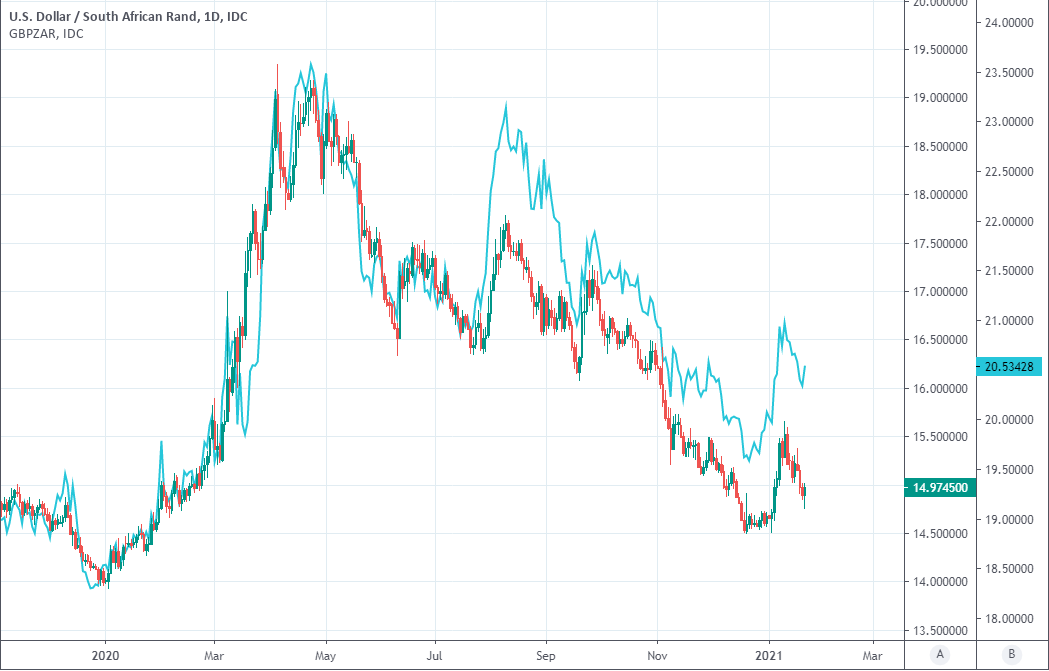 Above: USD/ZAR shown at daily intervals alongside Pound-to-Rand rate (blue).