The Rand has lost value against a host of its peers over the course of the past week amidst a softening in risk sentiment, reflected via the near-term decline in global stock markets and a rise in the yield paid on U.S. government bonds.

A rise last week in the yield paid on these bonds in turn saw international investors turn net sellers of South African bonds, creating a downward drag on the currency as they sold Rand and purchased foreign currencies.

In light of this weakness, the Pound-to-Rand exchange rate (GBP/ZAR) last week rallied to 21.00, before paring gains back to 20.70.

The exchange rate was as low as 19.50 in late December and the steady recovery has created a near-term positive trend that could allow for further advances, from a technical perspective. 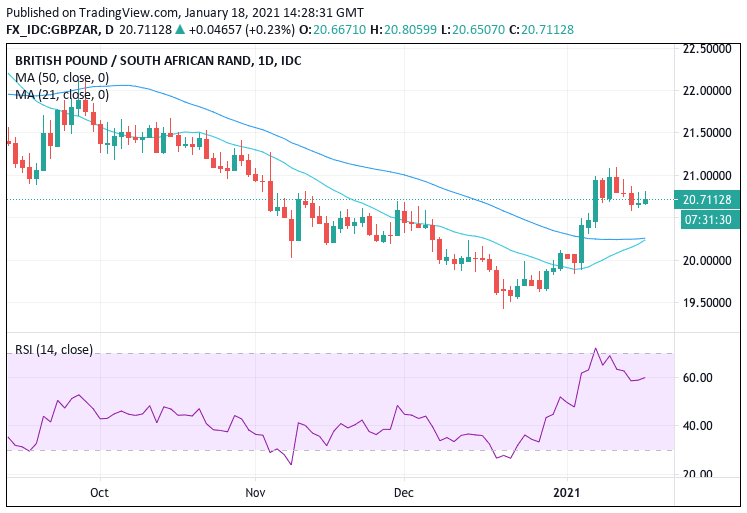 The rate is also above the 21-day moving average (light blue line) - which gives a shorter-term signal - which is located at 20.23. That the price is above both the 21 day and 50 day MA's is seen by some technical analysts and market participants as a reason to expect further gains.

The Relative Strength Index, which is another momentum indicator (lower panel in chart), is at 60 and positive and advocating for further upside.

Turning to fundamental considerations, a Rand comeback could be sparked by a fresh surge in investor confidence to which it is positively aligned, but a host of issues have analysts saying the market could be in for a period of caution.

Of the issues to consider is the ongoing covid-19 crisis and global restrictions on movement, a slow vaccine rollout in the Eurozone, Italian political uncertainty and the inauguration of U.S. President Biden which could attract some civil unrest.

Nothing in the above is new and screams out as a major threat, but it does serve as a narrative to the ongoing consolidation in markets following an exuberant end to 2020.

"People are over-optimistic about a fast recovery now that we have vaccines available. It's not only because vaccination will take longer than many expect, but mainly because overall economic health even before the COVID was quite poor. Current levels of government, corporate and private indebtedness are not in line with the pace of economic growth projected in any, even the most positive scenario," says Alexey Kirienko, CEO at EXANTE.

In short, a cautious global backdrop tends to make for a softer Rand.

However, Elias Haddad, Senior Currency Strategist at CBA says the market has by no means experienced a clear shift into bearish territory.

"USD is up against most major currencies and equity markets are mostly in the red. Nonetheless, the reflation theme is intact and a drag on USD. The vaccine rollout is underway, U.S. fiscal policy is about to turn more stimulative and global monetary policy settings will remain ultra-loose for a long time," says Haddad in a briefing to clients on Monday.

While global markets and technical studies appear unsupportive for the Rand in the near-term, i.e. over coming days, the broader trends that helped the Rand to a strong recovery in late 2020 could ultimately still reassert over coming weeks.

But the domestic picture pertaining to ZAR is however challenging and could cap any recovery potential, according to Annabel Bishop, economist with Investec in South Africa.

"The rand remains substantially weaker than at the start of the year, as SA is differentiated into the worst quartile of EM currencies on its poor growth and credit prospects, with domestic politics also hamstringing the economy," says Bishop in a weekly briefing on the Rand, out on January 18.

Bishop lists the following areas of domestic concern that has contributed to the currency's underperformance when contrasted with its peers:

As such, difficult domestic decisions must be taken before the domestic setup starts to become supportive for the South African currency.