South Africa's Rand rose against the Brazilian Real on Wednesday but otherwise had ceded ground to all of its largest emerging and developed world rivals as its nascent underperformance continued.

After leading risk currencies higher alongside other assets through much of the final quarter, South Africa's Rand has underperformed ever since it emerged in December that a more infectious and possibly vaccine-resistant strain of coronavirus is spreading in the country.

But the latest forecasts from Rand Merchant Bank suggest December's low could've marked the bottom for USD/ZAR and peak for the Rand's nascent recent rally.

"Due almost exclusively to the commodity price rally, our USD/ZAR fair value estimate appreciated by 210c since June and is currently 14.60. We expect commodity prices to continue rising through 2021, although at a far more muted pace, such that the Rand's fair value remains around 14.60 over the year. We have consequently revised our USD/ZAR forecast for 2021," says Kim Silberman, a fixed income and currency analyst at Rand Merchant Bank. 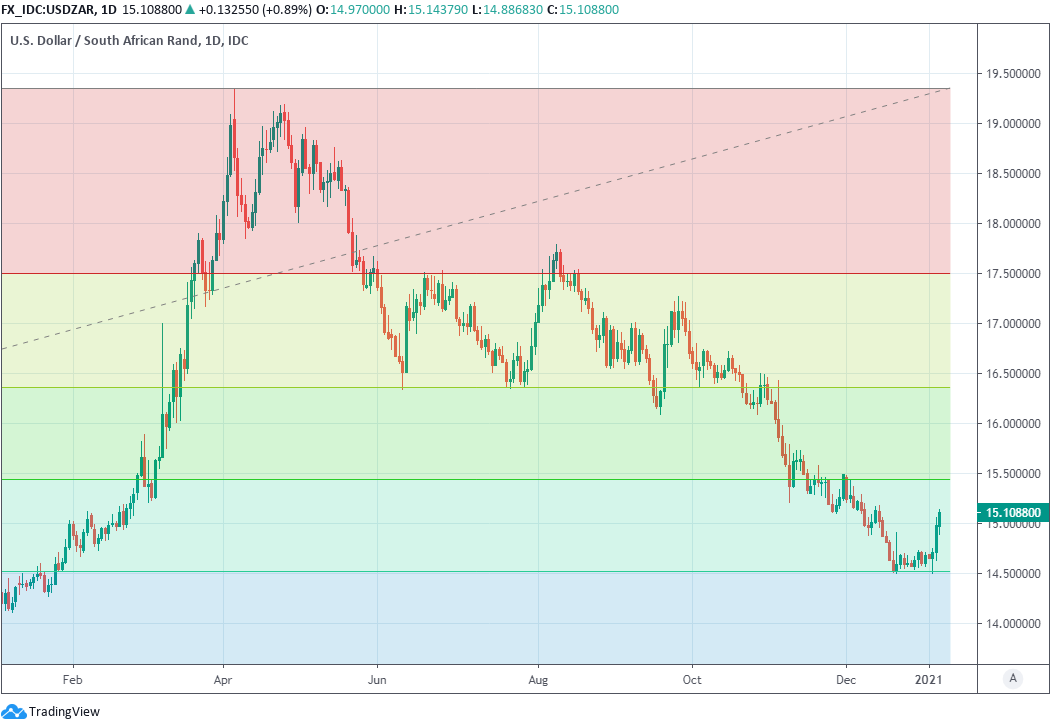 Above: USD/ZAR shown at daily intervals with Fibonacci retracements of 2018 uptrend.

South Africa's Rand saw its estimated fair value - another term for fundamental or instrinsic value - rise by more than 12% in the 2020 turnaround that pulled the USD/ZAR rate down from its March peak around 19.34 to its year-end closing level just above 14.50.

This was after commodity prices leapt out of their coronavirus-inspired trough in the second quarter of 2020 as investors looked past the pandemic to the subsequent global recovery and associated birth of a new business cycle.

But South Africans were waiting on Wednesday to hear what the government will say and more importantly, actually do in response to rising infection and death numbers following speculation that a form of 'lockdown' could be reimposed as part of an effort to reduce the new viral strain's spread.

A possible fresh closure of South Africa's badly damaged and already-fragile economy is a key reason why the Rand rally could be over for the time being. 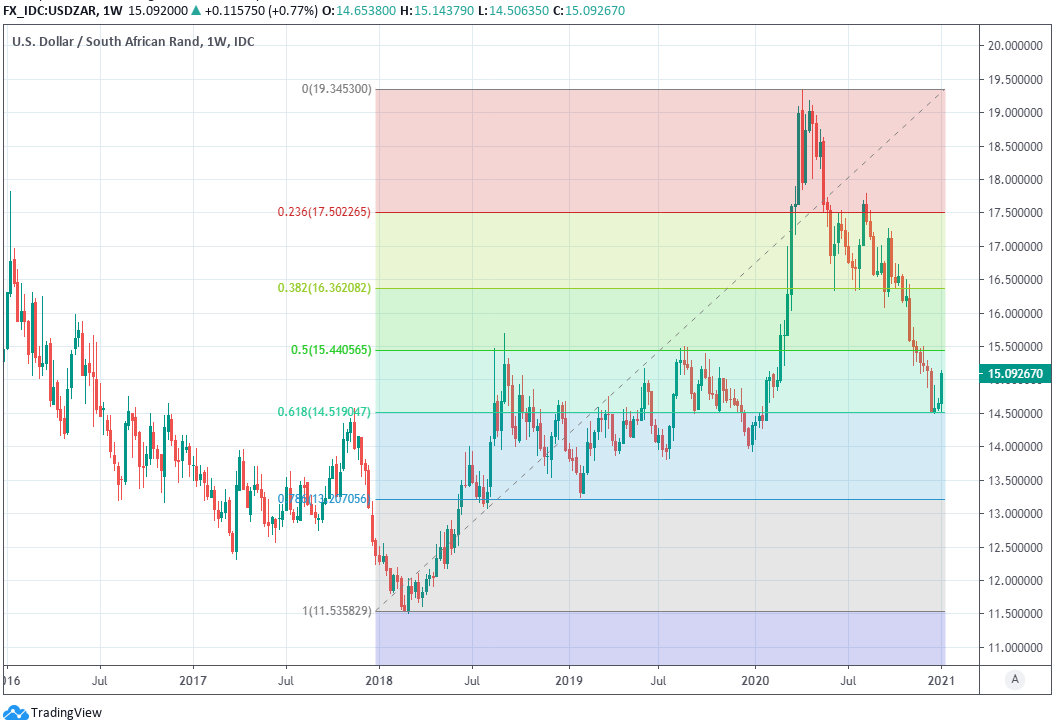 Above: USD/ZAR shown at weekly intervals with Fibonacci retracements of 2018 uptrend.

"We expect markets to whipsaw over the next 12 months as global sentiment vacillates between covid fears and vaccine hopes. Due to ongoing fiscal risks, we expect the USD/ZAR to trade above its 14.60 fair value, around a midpoint of 14.50," Silberman says. "The currency will sell off towards 16.50 during periods of risk-off and rally towards 14.50 during periods of risk-on."

President Cyril Ramaphosa called an early meeting this week of The National Coronavirus Command Council for Wednesday where decisions could be taken on how best to attempt a containment of the new variant of the disease.

Any return to 'lockdown' could reinforce the bottom around 14.50 for USD/ZAR and help further this year's retracement higher, which would also imply a continued upward influence on the Pound-to-Rand rate even if Sterling continues to underperform. 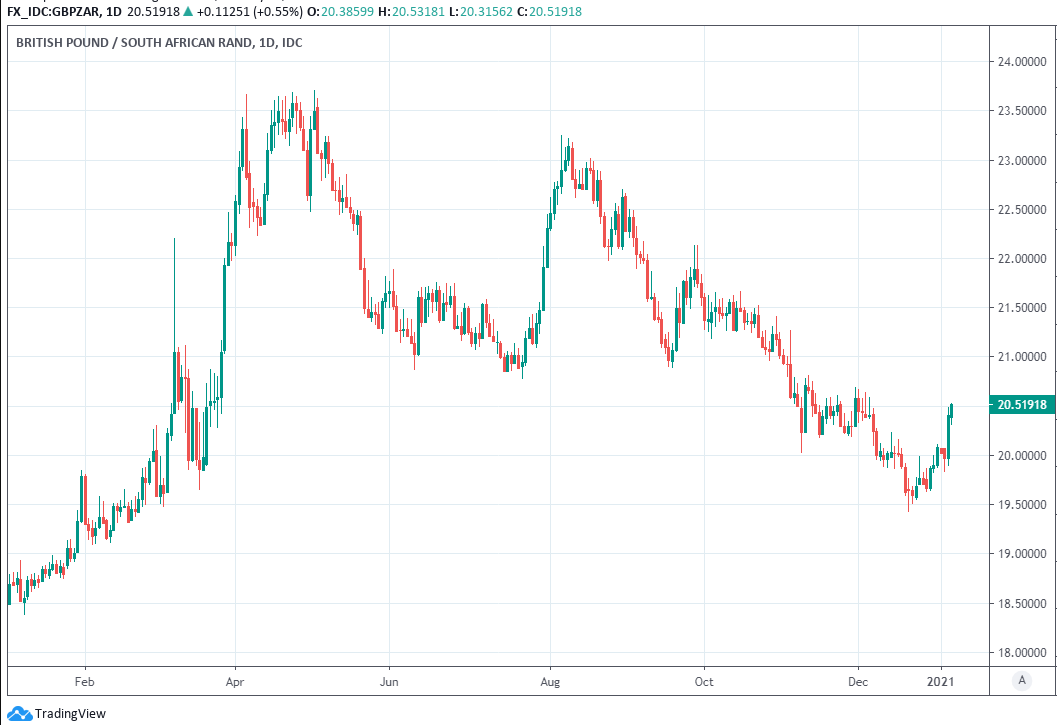 Just like with the Rand in the emerging market space, Pound Sterling was scraping the bottom of the major currency barrel on Wednesday after all of the UK economy was placed back into 'lockdown' in response to its own new variant of the coronavirus.

Britain detected another, also-more-infectious strain of the disease at the same time as South Africa and was this week told that a new nationwide shutdown will be in place until the middle of February, which more than offset for Sterling the relief afforded to investors by Christmas Eve's UK-EU trade agreement.

Furthermore, Prime Minister Boris Johnson implied in a statement to parliament on Tuesday that 'lockdown' could be extended to the end of March.

"The already-modest benefits we hoped would ensue for GBP from the reduction in risk premium have immediately been undermined by the tail event of a new Covid variant emerging in the UK that has led both to aggressive national lockdown and to travel links with the rest of the world being severely curtailed. This has led to a variety of forecast changes in terms of scale, but the broad thrust of direction has been to look for a material 2-3% UK GDP contraction to take place in Q1," says Shahab Jalinoos, head of FX strategy at Credit Suisse. "All eyes will now be on the 3 Mar budget to see what new forms of largesse funded by the printing press Chancellor Sunak can conjure."