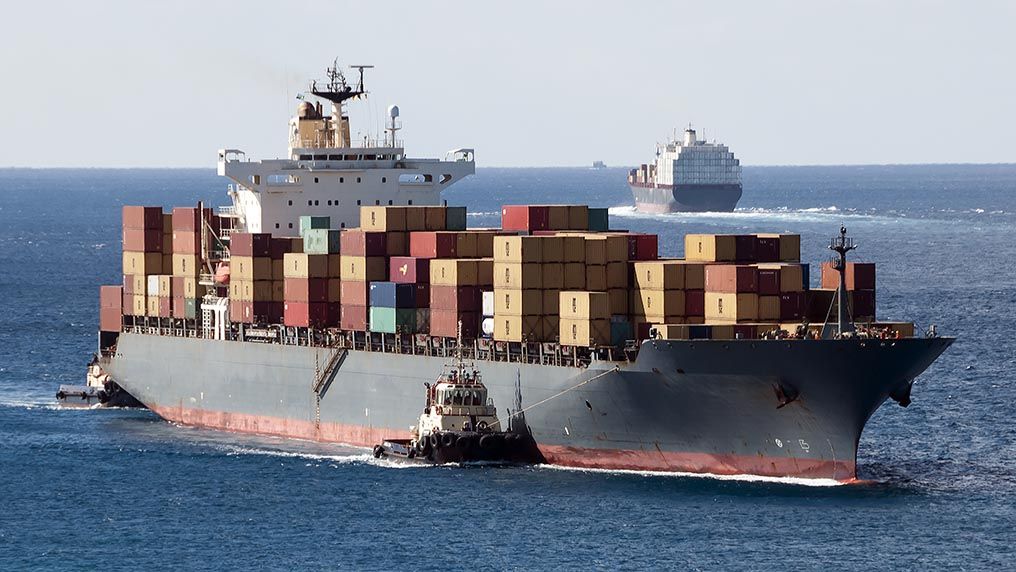 South Africa’s Rand about-turned Wednesday when the volatile currency fell against most major developed and emerging market rivals after, having gotten the better of them earlier in the week when USD/ZAR was seen trading at its lowest levels since March.

"Weakness witnessed in the rand today as it breaks above R17.00/$ is a continuation of the risk-off sentiment that kicked in earlier this week. A combination of events, including a potential of renewed lockdowns in the EU, the international banking saga and Donald Trump’s continuous pushing for China to face consequences for the COVID-19 outbreak, gave rise to renewed caution in markets. We also saw the dollar gain momentum," says Bianca Botes, an executive director at Peregrine Treasury Solutions. 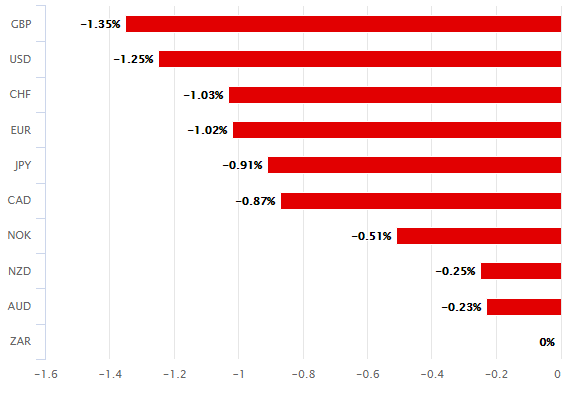 USD/ZAR rose above 17.0 and was aided higher by Federal Reserve Chairman Jerome Powell who said in testimony to Congress that rate setters have done “all of things we can think of” before warning that the U.S. recovery could suffer without action from lawmakers. Powell’s comments are an admission that the world’s pre-eminent central bank is all out of ideas as well as ammunition and so they’re also a bit of a red rag to a raging and resurgent Dollar.

Powell left the ball squarely in the court of bickering and electioneering lawmakers, although it was price action in Chinese and European currencies that scuppered the Rand. The Rand had risen alongside the Dollar and Yuan early on Tuesday but turned lower with the Chinese currency later in the session before unravelling on Wednesday.

"A technical break of 16.59 (200 DMA) triggered liquidation of USD/ZAR shorts as well as attracted fresh $ buying. In terms of franchise activity we saw selling of USD/ZAR by leveraged names on this spike. Resistance comes at 17.00/02," says Yulia Kryzhanovska, a vice president on the FX trading desk at Credit Suisse, in Tuesday remarks. “I doubt that inflows on the back of the bond auction would reverse the USD/ZAR uptrend. Expect the market to focus on global equities as well as the broader risk proxies.” 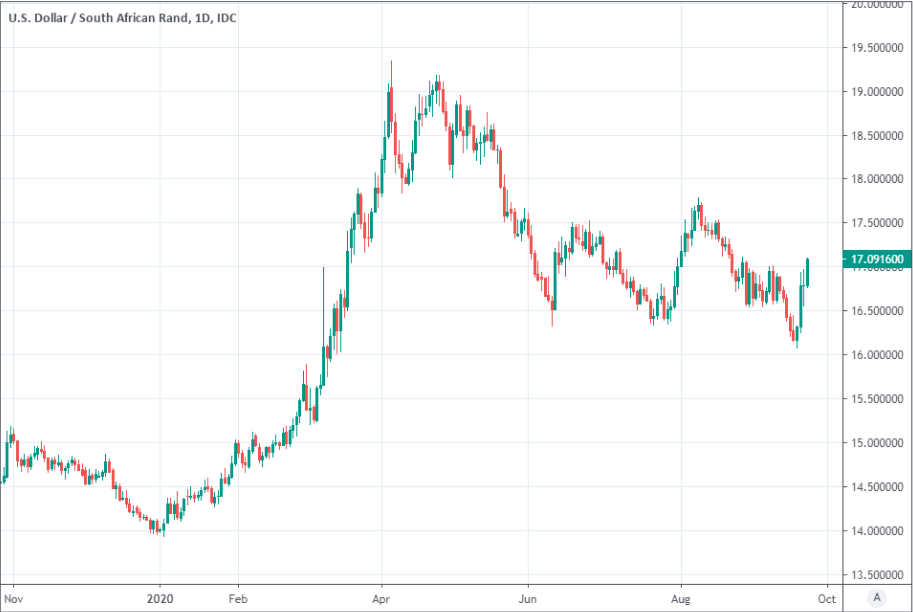 Wednesday’s bond auction didn’t save the Rand nor did the chequered performance in global stock markets, with losses building alongside falls in the S&P 500 but also those of the Chinese Yuan, which suffered its steepest intraday decline for months. Yuan losses may finally have pulled the rug from underneath EUR/USD too, although the Rand tends to be influenced by both because each is a currency of one of South Africa’s largest export destinations.

The Euro has itself followed the Yuan since the European Central Bank (ECB) protested in early September about the threat that a strong single currency could pose to the inflation outlook and Eurozone economic recovery. Central banks, especially those of economies which earn their bread and butter from exports, rarely welcome currency strength but the ECB has grounds to be particularly averse to it after having missed its inflation target for years.

This gives the trade-weighted Euro a powerful uplift and potentially demands offsetting falls in EUR/USD, which is more than 20% of the index. 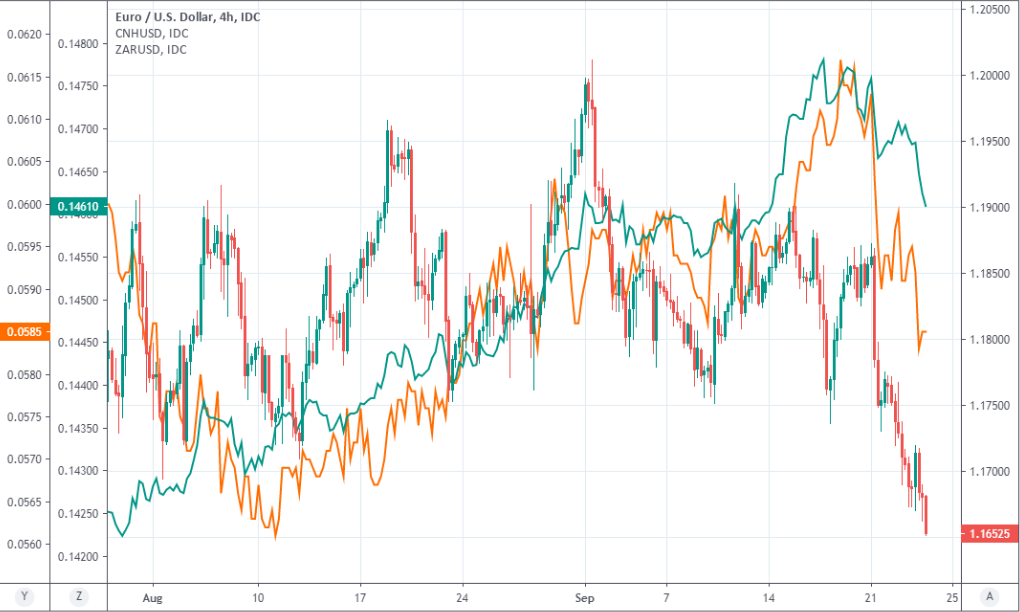 “We expect swings in global risk appetite to remain the primary driver behind the directionality of USDZAR for now. But we also think that the risk to USDZAR has become slightly skewed towards the upside given the rand’s tendency to record sizable selloffs once a correction starts,” says Nimrod Mevorach, a strategist at Credit Suisse. “We think that the selloff in the rand so far this week was amplified by the fact that USDZAR had fallen to multi-month lows (of 16.08) on Friday last week – i.e. shortly before the deterioration in global sentiment.”

The Rand, Yuan, Euro and stock markets have all traded with strong positive correlations of late, and were rocked last Friday when the White House went ahead with earlier established plans to prise two social media companies from China's hands or otherwise push them out of the country.

Since then President Donald Trump has called for China to face United Nations scrutiny over its handling of the coronavirus, at a meeting in New York, and President Xi Jingping warned of a “clash of civilisations” while casting China as a defender of free trade, globalisation and multilateralism. 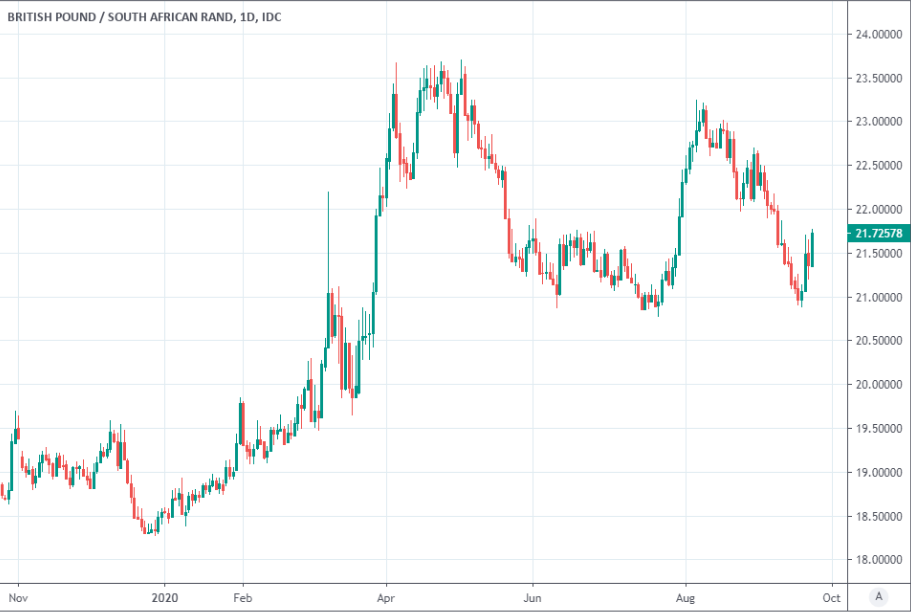 U.S.-China tensions are rising just weeks out from the November 03 election, a ballot that pollsters have credited the incumbent with almost no chance of winning. The outcome of the vote could be instructive of U.S.-China relations for years to come, not to mention the trajectory of a Yuan.

The market perception is that tensions will remain no matter if Trump is re-elected or evicted from the White House by opposition candidate Joe Biden. The latter has historically favoured a once-consensus “engagement policy,” which rarely resulted in new or enhanced tariffs on U.S. imports from China and never the ‘trade war’ that erupted between the two in early 2018, although Biden has changed his tune of late. An Asia-Pacific perspective can be found here.

“We think that a break above 17.00 is on the cards, which could then pave the way for a re-test of the highs from the second half of August (of 17.53-17.54) if global conditions remain unsupportive for the rand. By contrast, if we are wrong and global risk appetite improves in a steady way then we would expect USDZAR to stabilize and then fall back to its recent lows (of 16.08). Our underlying thinking is that local developments outside the coming budget review will remain a secondary consideration for markets for now,” Mevorach says. 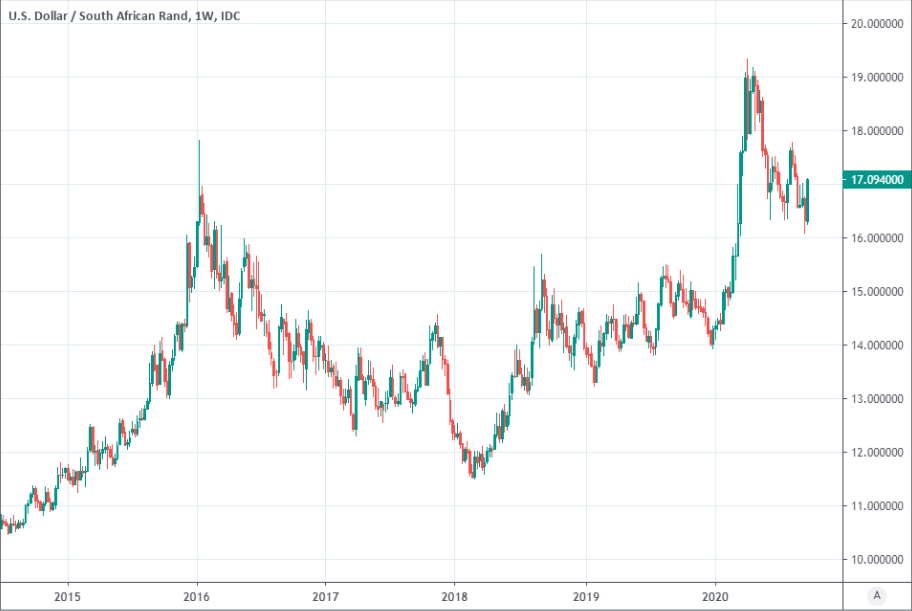